From clear scripts to big-name casting, the Jan. 6 hearings meet the standards of must-see TV 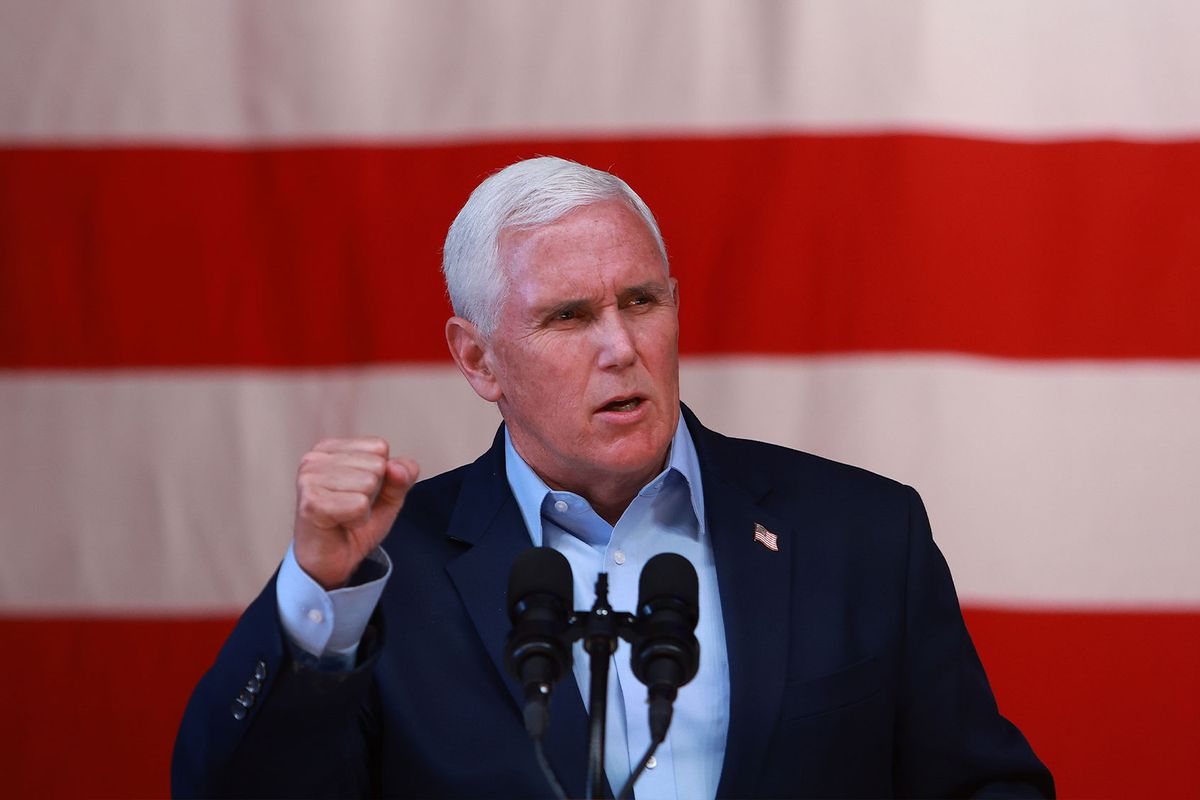 Among the factors leading to "Lost" and "Desperate Housewives" becoming the talked-about dramas of their debut season, as in 2004-2005, was their novel usage of bodies and questions in their respective premieres. "Lost" opens with wide shots of bodies scattered on a beach amidst a plane crash's wreckage. "Desperate Housewives" shocks with just one, that of the omniscient narrator who dies by suicide without warning.

Each show could have rolled along as straightforward relationship-driven dramas from there, save for the questions ending each pilot: "Oh Mary Alice, what did you do?" "Guys . . . where are we?"  These simple queries establish there's something bigger going on than any individual character's story arc or their conflicts – a potential threat that supersedes individual problems.

I can almost guarantee that nobody on the congressional committee investigating the Jan. 6 insurrection thought about either of these shows or the many subsequent series influenced by them when they laid the groundwork for their televised hearings.

Scratch that – I'm positive of that, given the straightforward presentation witnessed by more than 20 million prime-time viewers on Thursday, June 9. None of the committee members made extra efforts to play to the cameras, and at times its chairman, Representative Bennie Thompson, D-Ms., stumbled when reading his lines from the teleprompter.

The unspoken understanding, at least among viewers watching in good faith, should be that none of these people were elected based on their acting ability. But the committee does understand how potent a tease, cliffhanger, and "coming up this season" montage can be to persuade a skeptical viewer to stick with the story. Rather, the man producing these televised hearings, former ABC News president James Goldston, understands this.

This approach is necessary given the grave danger the Jan. 6 insurrection represents and its relationship to a slow-moving, ongoing coup. Our entertainment landscape is awash with alternatives more exciting than a stodgy congressional committee hearing run by a bipartisan committee – a team of Democrats and two Republicans who, can you believe it, appear to respect each other.

But that also means not enough people are paying attention or simply won't, abetted by Fox News' refusal to carry the first prime-time hearing live in favor of featuring Tucker Carlson deriding it as propaganda.

Thus, last Thursday's episode served as a plainspoken table-setting chapter and an educational reset for any tuned in to ABC, NBC, CBS, CNN, PBS, C-SPAN or MSNBC, with Thompson explaining why the committee embarked on its investigation against the wishes of nearly every Republican member of congress.

Our entertainment landscape is awash with alternatives more exciting than a stodgy congressional committee hearing.

The prime-time opener of the Jan. 6 committee's hearings demonstrates comprehension of dramatic structure, not only regarding episodic presentation but in terms of spelling out a full season arc. Mind you, it was devoid of puzzle-box flourishes or the type of juiced-up "Desperate Housewives"-style heat that amplifies unscripted reality and episodic true crime.

Cheney introduced the committee's aim in these hearings to clearly spell out "plots to commit seditious conspiracy on Jan. 6" by explaining exactly what each episode is going to show us. Monday's second hearing presented recorded testimony from campaign chief Bill Stepien and aide Jason Miller, who told the committee that they informed Trump the election was lost and advised him against making any statement on the night of the election.

The next hearing is a dive into Trump's efforts to corrupt the Justice Department, a development about which former Attorney General Bill Barr has already dropped hints.

Some of its "loglines" were teased before the hearings began, mainly the revelations that in the days leading up to January 6, 2021, former President Donald Trump pressured his Vice President Mike Pence to assist him in overturning the election results. Because of this the first Pence-centered hearing, originally estimated to be the fourth, will probably be a popular one.

Other were announced by Cheney during the first telecast, along with scheduled appearances such as Monday's main "get": live testimony by former Fox News political editor Chris Stirewalt, the man behind that network's controversial and ultimately correct decision to call Arizona for Joe Biden on election night.

The coda of its curtain-raiser featured committee Vice-Chair Liz Cheney, R-Wy., spelling out the themes of each hearing to come and, where relevant, announcing corroborating testimony from a variety of witnesses – many of them former members of Trump's inner circle.

Before that came the drama's introduction of its first hero, Capitol Police officer Caroline Edwards, and a few of this story's monsters, including the Proud Boys meeting and the Oath Keepers. 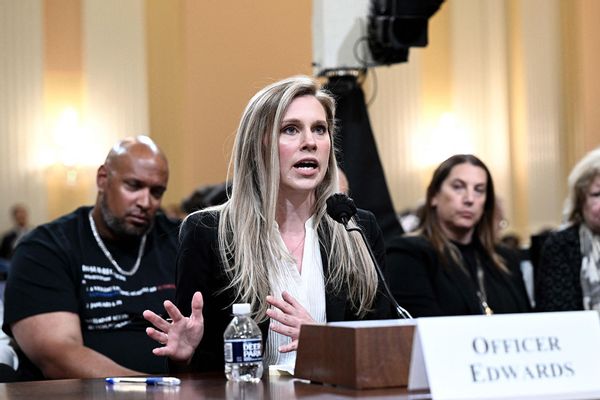 US Capitol Police Officer Caroline Edwards testifies during a House Select Committee hearing to Investigate the January 6th Attack on the US Capitol, in the Cannon House Office Building on Capitol Hill in Washington, DC on June 9, 2022. (BRENDAN SMIALOWSKI/AFP via Getty Images)

It injected unintentional comic relief in the guise of Barr's taped deposition in which he described Trump's claims about the 2020 election having been stolen as, among other epic terms, "crazy," "garbage," "idiotic" and "bulls**t."

In the telecast's closing moments, their members' words speak to the question driving the season, the hearing's "Guys . . . where are we?" equivalent. At the root of all of this, the premieres spell out, the committee endeavors to prove, is Donald Trump's desire to hold on to power at any cost.

To some, describing this historic televised chronicle in the terms of scripted drama may seem to cheapen the proceedings. The opposite is true – it's a highly rational strategy to meet the audience where it is.

Goldston's hand in the hearings' production is light enough for the viewer to appreciate how easy-to-follow each installment is. For the most part, the committee has delivered as promised, save for a last-minute cancellation by Stepien, whose wife went into labor. Even then, his video deposition was edited in a way to fit within the flow of the committee's script.

It's also present in the "casting," as it were, of the committee's witnesses. Footage of Ivanka Trump's agreement with Barr made headlines, understandably. However, the conscious decision to call upon Edwards to testify is particularly savvy.

Describing this historic televised chronicle in the terms of scripted drama may seem to cheapen the proceedings. The opposite is true.

Edwards is a compelling witness in any forum; the footage shows her single-handedly doing her best to hold back a surge of insurrectionists and sustaining a head injury when they overwhelmed her. She's also a blonde, white woman and a veteran's daughter, which is to say she embodies the type of woman the far-right professes to champion.

Establishing a public record of the committee's findings is the main mission here, but so is persuading any skeptics or deniers. Edwards pushes back on those assumptions with her statements and her image.

But the hearings also employ the all-important element of unpredictability, keeping its most quotable segments under wraps until broadcast.  Miller's and Stepien's testimony that Trump's false claims of a stolen election may have begun with a drunken suggestion by an "apparently inebriated Rudy Giuliani," generated the second-best catchphrase of the day after Stepien's bumper sticker-ready "Team Normal," as he describes the group advising Trump against declaring victory.

A few analyses of Thursday's primetime broadcast try to whet the reader's appetite by calling the committee's televised hearing the must-watch event of the summer. This is probably an exaggeration in a media environment as fractured as this one, to say nothing of how jaded we are after living through a presidency that warped reality for a frighteningly large percentage of the American population.

Our lawmakers have taught the modern TV audience that congressional and senatorial committee hearings deemed important enough to lead or drive the news cycle are merely opportunities for them to grandstand for their constituents. Since their votes are already decided and no amount of qualifying evidence or disqualifying evidence could change their minds, weighing facts doesn't enter the equation.

Viewers presumed to be actively engaged in watching this committee's presentations are accustomed to having such cases built up by cable news hosts and experts only to be denied a payoff of comeuppance.  We all lived through televised hearings of special counsel Robert Mueller's investigation into whether Trump courted Russian interference in the 2016 election, which was hyped for nearly two years and resulted in a flurry of criminal charges brought against Trump's associates but none against Trump himself.

In terms of the hearings for Supreme Court Justice Brett Kavanaugh and associate justice-designate Ketanji Brown Jackson, the notion that senators debated their fitness to hold a position was a farce, giving way to the spectacle of surmising how well one's "team" holds up against the opposition.

The viewer, therefore, expects chaos and cacophony from these events, not debate or elucidation or, heaven forbid, progress or results.

Jan. 6 committee members who have spoken to the press outside of the hearings have been careful to say they're not necessarily counting on results, either. They're focused on ensuring their findings are witnessed and considered, that they become the topic of whatever the equivalent of water cooler discussion is at a time when gathering around a single reference point feels impossible.

Obviously they committee is doing whatever they can to lay a narrative course solid enough to end with an indictment for Trump, regardless of how notoriously difficult finales are to nail to everyone's satisfaction – ask the creators of both of those dramas mentioned up top. But if enough of us remain tuned in to that point, that counts as a win by any metric.