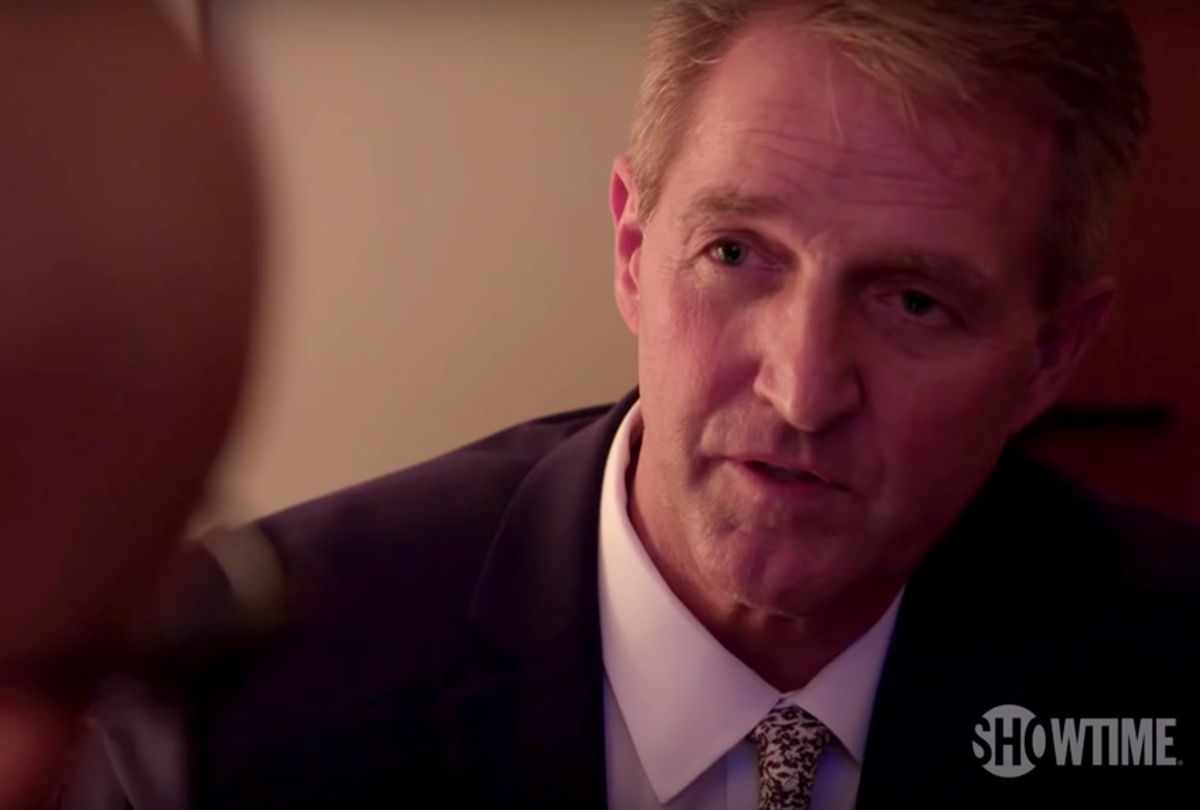 Jeff Flake on "The Circus" (Showtime)
--

Lately Showtime’s political docuseries “The Circus: Inside the Wildest Political Show on Earth” has been caught in a trap that has snagged countless scripted television series, committing itself to an initially riveting storyline that quickly becomes emotionally draining.

In fairness, “The Circus” isn’t alone in this. The news cycle’s zeroing in on the bitter confirmation process surrounding Brett Kavanaugh, who was confirmed to the Supreme Court on Saturday, has reflected the bitterness and anxiety of the nation 24/7 for several weeks now.

Chances are if you watched the episode prior to this week’s, “Judgment Day,” you were already wrung out by the experience of the Senate Judiciary Committee’s hearings featuring Dr. Christine Blasey Ford’s testimony, followed by Kavanaugh’s.

This was followed by a week questioning the legitimacy of the FBI investigation called for by Arizona Sen. Jeff Flake and agreed to by the White House, generating its own outrage. A number of people willing to corroborate the report by Kavanaugh’s second accuser, his Yale classmate Deborah Ramirez, attempted to bring their accounts to the FBI and were ignored, according to reports in The New Yorker and The Washington Post.

Then came the White House striking back, with President Donald Trump insulting ABC News’s Cecilia Vega during a press conference held in the Rose Garden while cameras rolled. That was Monday. Tuesday night Trump mocked Ford’s sexual assault testimony, earning gales of laughter and whoops from supporters at a rally in Mississippi. By Wednesday, as reports circulated that the FBI was concluding its investigation, it was all over save for the primal screaming.

Producers of “The Circus” and hosts Mark McKinnon, John Heilemann, Alex Wagner and strategist Steve Schmidt must have known which way Kavanaugh’s confirmation was going to go.

“I think we’re at the forward edge of a huge cultural moment in this country on the question of whether this guy is elevated to the high court or not,” says Schmidt during the episode’s standard mealtime opening. (This week’s example of Schmidt, McKinnon and Heilemann openly mocking the American Heart Association’s guidelines concerning cholesterol intake takes us to Austin, where the men dig in to their discussion over plates of migas while Wagner, in NYC, participates via phone while eating lox and bagels.)

Masters and mistress of the obvious, indeed. But this is also an acknowledgment that slathering anger upon anger likely won’t prove beneficial for a series weaving drama out of plot arcs determined by current events and politics.

Wisely, then, Sunday’s episode “The Verdict” pulled away from the protestors and dismissive senators in Washington, choosing instead to hone in on a few races that stand to be highly impacted by the results of Kavanaugh’s confirmation, rendered just five weeks prior to the midterm elections.

And although the sojourn to see Beto O’Rourke in action during a campaign story in the central Texas town of Elgin, Texas —“rattlesnake country,” Schmidt calls it — may not reveal additional information about O’Rourke’s personality, it does illustrate the steep and precarious uphill battle challengers like him are facing in deep Red states at one of the most partisan junctures in our nation’s history.

How the Kavanaugh confirmation goes poses a real danger for O’Rourke, Schmidt observes, “because it has the ability to pull him off his plan, and right now his plan is working. He can’t say to the Republicans who are considering voting for him that hey, I’m going to vote exactly like Kamala Harris.”

Sure enough, the poll numbers post-confirmation bear this out, with O’Rourke slipping further behind Trump-supported Sen. Ted Cruz.

Wagner, meanwhile, ventures to Hannibal, Missouri to catch a campaign appearance by Sen. Claire McCaskill’s challenger, the state’s Attorney General Josh Hawley. The camera captures Hawley telling the press that in the Kavanaugh confirmation process, McCaskill has indicated that she is “happy to destroy the reputation of a good man, has been happy to destroy the livelihood and the family life of a good woman in Dr. Ford — happy to do that, all for political purposes. It is wrong.”

“At the end of the day,” he tells Wagner later, “this race is about the fact that Senator McCaskill is totally out of step with this state.”

And, predictably, in a brief one-on-one interviews McKinnon conducts first with West Virginia Sen. Joe Manchin and then Cruz, each telegraphs what would eventually become record, that he would vote to confirm Kavanaugh.

Following this strategy in “The Verdict” provided a respite if not much enlightenment, somewhat mitigating a sensation of being trapped in a holding while not exactly landing the plane. But only to a point.

Every element of “The Circus” is a portrait rendered in hindsight. In slightly more ordinary times that enables the series to serve agile, contextualizing review of the week that was and what it all means. Coming at the end of a week that’s equally infuriating and emotionally exsanguinating, though, the best “The Verdict” could do is confirm what we already know.

Heilemann’s interview with Jeff Flake at Saint Anselm College, smiling like Garfield just swallowed Woodstock, as he says that an FBI investigation limited to less than a handful of witnesses would be concerning, turns a glistening list on the oleaginous sheen of dishonesty surrounding the process. This is particularly true when Flake declares he’s pleased to see the president declare the Rose Garden press conference that the FBI was free to interview whomever the agents wanted to.

Heilemann deflates that in sharing that his source within the organization told him the Bureau did not receive any new official instructions from the White House, meaning the team felt it only had the authority to talk to the original four witnesses.

“Then that’s beyond the time that I was assured that others will be contacted,” Flake replies weakly.

Back in Houston, Texas, Schmidt sits down with former FBI Assistant director Frank Figliuzzi, a man who has conducted previous background investigations on Supreme Court nominees.

“This speaks volumes about the depth and scope the White House permitted in this inquiry,” Figliuzzi says. “The White House isn’t allowing them to finish the week. There is no way on God’s green Earth and that a fulsome reinvestigation would happen in this time frame . . . it says to me that something less than the truth is desired. It’s not a desire to seek the truth. It’s a desire to shape the truth the way the White House wants it.”

Wagner's episode-closing conversation with attorneys Lisa Banks and Debra Katz, who represent Ford, seconds this by revealing that none of the witnesses who can back up Ramirez’s account were interviewed. Neither was Ford herself.

There could be some comfort in having one’s suspicions validated by experts and people in the midst of the skirmish. But it comes to viewers after Kavanaugh’s confirmation became a done deal. Left unclear is whether this assists the viewer in digesting the ramifications of everything that’s occurred over the last seven days, or adds to our ongoing and sharpening bout of indigestion.

For all of its wide-ranging coverage, though, one of the most unforgettable images in “The Verdict” is a fleeting one: as Maine Sen. Susan Collins officially confirms her yes vote for Kavanaugh to the Supreme Court, the camera remains fixed on Wagner’s face witnessing the moment. Her eyes never leave the screen; she’s obviously aware that her reaction is being captured. Ever the professional, her expression remains fixed and blank, revealing no feelings — no disappointment, no evidence of relief, no proof of bias.

Like the rest of the half-hour, her reaction tells us very little that we don’t already suspect to be true. But one guesses that maybe, like everyone else, she’s just ready to move on from this bombed out conflict zone. Even if the stop ahead is more tumultuous, at least the source of our stress may feel a slightly different.