In its return, Showtime's political series grapples with the whirlwind of the midterm elections 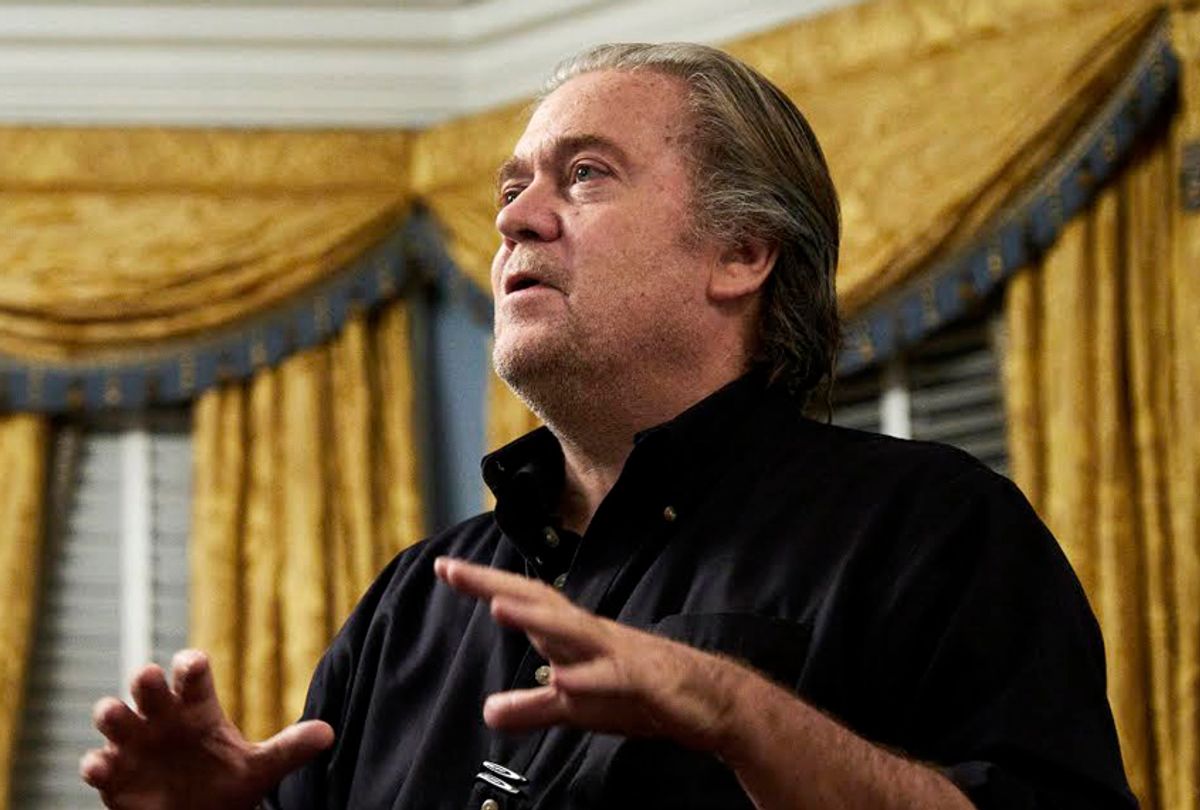 It must be interesting to watch an episode of Showtime’s “The Circus: Inside the Wildest Political Show on Earth,” dispassionately. Is that even possible eight weeks prior to a midterm election that liberals and conservatives agree to be a referendum on Donald Trump?

Sunday’s episode, “The Gathering Storm,” does not leave the viewer with any sense that question can easily be answered. But it does reflect a sense of anxiety and frustration on all fronts, even among previously imperturbable figures like Steve Bannon, Trump’s former right-hand man.

Bannon’s conversation with “Circus” co-host John Heilemann serves as the centerpiece of the series’ midseason return, whose production coincided with a week so frenetic that the on-air cut did not get around to mentioning the sexual misconduct allegations against Supreme Court nominee Brett Kavanaugh. That surfaced Friday via another New Yorker story written by Ronan Farrow and Jane Mayer.

But as Heilemann and his co-hosts Alex Wagner, a correspondent with CBS, and political strategist Mark McKinnon observed at the top of the half-hour — while digging into an all-American meal of burgers, fries and beer — this political cycle defies all norms.

While the show was on a break, Heilemann says, “every week was some news kind of Earth shattering, tectonic plate-shifting [...] cataclysm.”

Wagner recaps the summer of rage and horror, highlighting the international relations debacle that was Trump’s Helsinki press conference with Vladimir Putin; the shock of children wrapped in foil blankets being held at detention centers; the various indictments handed down by Robert Mueller; and finally, the anonymous New York Times opinion piece authored by a Trump administration insider.

In previous episodes one might have called out the ringmasters, Heilemann especially, for hamming it up — a quality political junkies who watch “The Circus” may find either entertaining or irritating. But then, remember that as the trio sinks their teeth into a thick slab of red meat, they had yet to ride out the rapids of this particular week.

READ MORE: Don’t speak for my military family: A veteran’s wife on Colin Kaepernick and the Nike boycott

“The Gathering Storm” is meant to be a metaphorical title as well as a literal. Darkening clouds over the landscape allude to the impending touchdown of Hurricane Florence, which will go on to batter the southeastern coast, hitting the Carolinas particularly hard.

As the episode begins, the editors and hosts of “The Circus” had yet to witness Trump’s characterization of his administration’s post-Hurricane Maria response in Puerto Rico as “one of the best jobs that’s ever been done with respect to what this is all about” and “an incredible unsung success.”

“The Circus” is styled as a fast-paced documentary romp, leavened by its jaunty Sousa-march inspired theme. Never has the show aspired to color the goings-on in Washington D.C. as comical, though. Its stock-in-trade is the serious business of joining one scene of political craziness to the next as close to real time has possible, perhaps helping viewer to make sense of the chaos through deeper conversations with insiders.

But if “The Gathering Storm” left any tea leaves for the viewer to read, it’s that the midterms are still anybody’s game – and the name of that game is fear.

Even Bannon reeks of it in his chat with Heilemann, which takes place in the former White House chief strategist’s inner sanctum – identified as “the Breitbart Embassy.”

Before launching into the interview, Heilemann says some people believe he should be deprived of a platform, obliquely referring to the social media pressure that led the New Yorker to cancel the former Breitbart News executive’s appearance as the headliner of its 19th annual festival.

That said, “The Circus” co-host explains that with his staff of 25 people, Bannon has managed to raise more than $5 million and stands to add to that total. If nothing else, Heilemann says, it’s important to understand what he’s doing and keep an eye on him.

And Bannon very proudly shows Heilemann an excerpt from his latest opus, “Trump @ War,” a manipulative propaganda film designed to stir up the Trump base leading up to the midterms. Images of bloodied protesters identified as being affiliated with the right explode against a backdrop of synthesized disaster music playing behind heavy handed commentary about the violent left. It ends with a chant, inferred to be by left-wing protesters, of a few men screaming, “No Trump! No law! No USA at all!”

Heilemann wipes his eyes in response, but it’s not clear what emotion is making his eyes water.

“Subtle,” he says. He asks Bannon if he’s going to send the reel over to Trump, to remind the president of how much he misses his former right-hand man. “Maybe you’ll get your phone calls returned occasionally now,” Heilemann adds. “A cinematic reach-around, is what this is.”

What follows is a contentious back-and-forth that seems to set Bannon on his heels. This is the quandary with “The Circus”: often it’s not clear whether extremist operatives such as Bannon are on the defense in interviews like this, or if they’re so surreal in their dishonesty that they baffle the journalist host holding their feet to the fire.

Yet Bannon is less sure who will be the victor this time. The biggest advantage he had in 2016, he tells Heilemann, is that nobody took him or his ilk seriously.

“Did you literally just say ‘the left is woke’?” Heilemann asks, his voice tinged with mild disbelief?

“Yes,” Bannon says softly, hereby declaring the term ‘woke,’ which has been on life support for some time now, officially dead. (It shall be buried in the Urban Dictionary mausoleum beside its cousin "lit.") Heilemann puffs and shakes his head and says, “Okay.”

Bannon goes on to call the midterm elections “the existential threat” the far-right is fearing.

“That’s why I made this film,” he says. “I think we’re the first guys to come out and get the messaging right.” The troops are out there, he continues. “They’re just waiting for someone to say, ‘All hands on deck.’”

Heilemann points out that his strategy isn’t to invigorate through optimism, but rather, through fear. “You cut together incendiary footage in order to try to scare the shit out of the Republican base voters.”

“I am a propagandist,” Bannon admits, but takes issue with past comparisons likening him to "the Leni Riefenstahl of the Tea Party movement." “That’s a little harsh,” says Bannon, who has spent the months following his ouster from the White House bolstering far-right populist movements in Europe.

“I’m trying to make sure people understand the urgency we have in front of us, how high the stakes are,” he says. The problem in this binary battle of what he terms the “resistance” — as in anyone left of the extreme right — and the “deplorables,” is that the latter is not afraid. In fact, they’re complacent. “They’re leaning on their shovels.”

Heilemann moves on to gauge the fortitude of Bannon’s abiding loyalty to Trump by asking the propagandist if he thinks Trump is as smart as he is. Bannon pauses, leaning back in his seat for a moment before saying, “Oh, I think Donald Trump’s as smart or smarter than I am."

Bannon goes on to laud Trump’s strategy with US–China relations and its relationship to trade and national security. But Heilemann quickly counters that by saying, that’s not Trump’s strategy, that’s Bannon talking.

“He can’t sit here in this room and have a conversation on anything like the level you’re talking about! He can’t follow this conversation!” Heilemann exasperatedly says, reminding Bannon that the day before, Trump described Hurricane Florence as “tremendously big and tremendously wet.”

In a subsequent exchange about the anonymously-written New York Times op-ed allegedly from someone high-up in the administration, he asks Bannon to clarify what he means when he describes it as a “coup.” Bannon then likens the situation to what Abraham Lincoln faced with General George B. McClellan.

The general’s slow response to Lincoln’s orders to pursue Confederate General Robert E. Lee after Lee withdrew his troops from Maryland — Union territory — following a brutal battle at Antietam Creek, led to Lincoln removing McClellan from his post and replacing him with Ambrose Burnside.

This comparison, of course, makes Trump appear to be a noble commander under siege by insurgents within his own circle as opposed to a hot-headed simpleton who, by various reports, has been seen eating paper or has had documents surreptitiously removed from his desk before he could see them, allegedly for the good of our democracy.

Bannon finishes by saying that if he were there, he would order the Department of Justice and the Federal Bureau of Investigation – two government agencies Trump has attacked openly – to do a thorough investigation, find the culprit or culprits, and give them the opportunity to resign or be terminated.

“They think he’s unfit for office, Steve,” Heilemann replies calmly, to which a ruddy-faced Bannon counters, “the American people determined in 2016 he was acceptable for office. And they’re going to determine on November 6 that he’s acceptable to remain in office, OK?”

Well, that is yet to be seen. But Bannon is clearly shaken to the point that he’s come off as desperate to get back into Trump’s good graces.

Then again, it’s all about perception and editing, isn’t it?

As “The Circus” brings home its third season, there are no plain signs as to whether the predicted “blue wave” will wash over the country as so many believe it will. Seasoned political strategists believe the Democrats will take back the house, but as “Full Frontal” host Samantha Bee joked on a recent episode, “there's no guarantee the Democrats could successfully take back a shopping cart.”

Indeed, there are forces of nature that make these midterms unpredictable — particularly the storm that goes by the name Donald Trump.

On Thursday, with Hurricane Florence bearing down on the East Coast, Trump shared his now-infamous tweets claiming reports of 3000 Puerto Ricans dead after Hurricane Maria to be false.

McKinnon is there to bear witness as Kevin Downing, lead counsel to Paul Manafort, announces that Manafort will cooperate. The episode closes with Wagner and McKinnon sitting down at a fancy restaurant with Republican strategists Alex Castellanos, Kristen Soltis Anderson and Michael Steele to get a sense of how the establishment is feeling about their party’s odds right now.

“I think Washington is about to have a really big homeless problem,” Castellanos wryly states. “I think we’re going to have fifty Republican congressmen on the street. Look across the aisle at the #MeToo movement, which has swelled and filled this country. We’re talking about something that’s bigger than politics. We’re talking about gender and sex and power. There’s a huge Democratic wave coming out.”

Anderson adds that if Republican losses are in any way pinned on Donald Trump, that’s when the calculation changes. If they smell blood in the water, she says, the conversation shifts to the departure.

Castellanos, for his part, is sure about one thing.

“I think the first two years of the Trump presidency will forever be known as the calm years,” Castellanos says, delivering the episode’s final line. “That scares me to death.”

Only seven episodes to go until the midterms. Batten down the hatches.

The author has opinions on what liberals get wrong about diversity.