Ringing the alarm for Merrick Garland: Department of Justice stands in real peril because of Trump

Are you listening, Merrick Garland? Protecting the DOJ means keeping Trump's stubby fingers off it 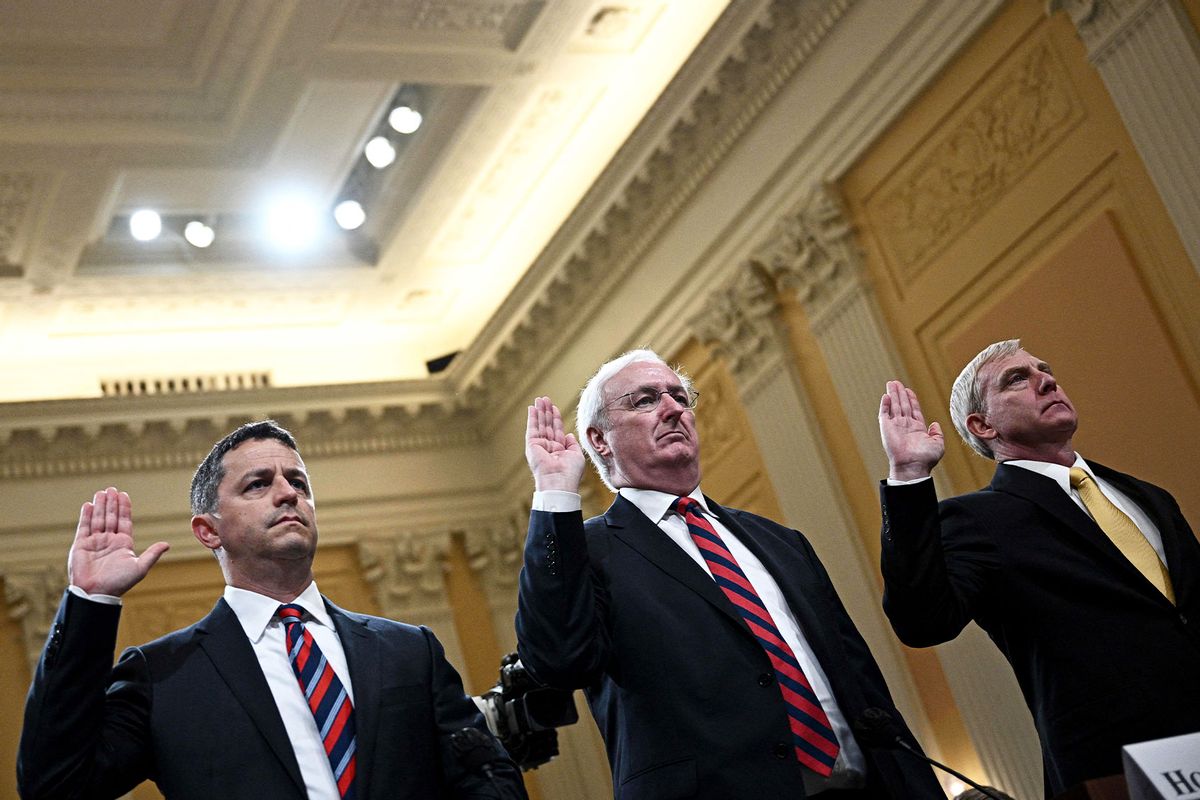 Former Assistant Attorney General for the Office of Legal Counsel Steven Engel (L) Former Acting Attorney General Jeffrey A. Rosen (C) and former Acting Deputy Attorney General Richard Donoghue (R) are sworn in during the fifth hearing by the House Select Committee to Investigate the January 6th Attack on the US Capitol in the Cannon House Office Building in Washington, DC, on June 23, 2022. (BRENDAN SMIALOWSKI/AFP via Getty Images)
--

If Merrick Garland truly wants to protect the Department of Justice (DOJ) from political interference and salvage the institution's reputation, then he must charge Donald Trump for his crimes related to his 2020 coup attempt. That's the main takeaway from the House committee to investigate the January 6. It is the message the committee clearly hopes will be heard by the attorney general, and was the underlying message of the committee's fifth hearing on Thursday.

Garland is under increasingly sharp criticism for failures to hold high level Republicans accountable for the roles they played in both the overall coup effort and the attack on the Capitol on January 6. Garland's slow-walking a criminal investigation into Trump and his GOP co-conspirators has largely been perceived as an attempt to "depoliticize" the DOJ after Trump and his attorney general Bill Barr did so much to disgrace the agency. But as Thursday's hearing made indisputable, the biggest threat to the DOJ's reputation of independence from politics is Trump himself. As long as Trump is free to worm his way back into the White House, legally or not, the DOJ is in very real danger of being corrupted in Trump's image.

"Imagine if your mayor lost a re-election bid, but instead of conceding the race, they picked up the phone, called the district attorney and said, 'I want you to say this election was stolen,'" Rep. Bennie Thompson, D-Miss., explained in his opening statement on Thursday. That is what Trump was doing — but on a much grander scale.

RELATED: Trump and his stooges must be punished: It's the only way to save America

Thursday's hearing focused on the efforts Trump undertook during the coup to strongarm the DOJ into backing his false claims that the election was stolen.

Jeffrey Rosen, Richard Donoghue, and Steven Engel — all three higher-ups in the DOJ under Trump — testified to a meeting they had with Trump on January 3, 2021. During the meeting, they threatened to resign if Trump went ahead with a plan to use the DOJ for his criminal ends. Trump's plan was to appoint a man named Jeffrey Clark to acting attorney general, these men reported, for the sole purpose of creating a legal pretext to void out Joe Biden's presidential victory.

As long as Trump is free to worm his way back into the White House, legally or not, the DOJ is in very real danger of being corrupted in Trump's image.

"Just say the election was corrupt and leave the rest to me and the Republican congressmen," Trump reportedly told the leadership of the Justice Department, according to Donoghue's testimony.

Rep. Adam Kinzinger, R-Ill., described the man that Trump tried to force on the DOJ as acting attorney general: "Who's Jeff Clark? An environmental lawyer with no experience relevant to leading the entire Department of Justice. What was his only qualification? That he would do whatever the president wanted him to do, including overthrowing a free and a fair democratic election."

It's true, of course, that Republicans will accuse Garland of "playing politics" if the DOJ charges Trump for the crimes illustrated during the House committee hearings. It's also sadly true that many of the thumb-sucking centrists in the media will go along with this narrative, rather than face up to the very real threats to our democracy. But, as Thursday's hearing shows, prosecuting Trump is the best shot we have to keep the DOJ from becoming a wholly corrupt institution serving the whims of a dictatorial president.

In 2020, Trump's efforts to corrupt the DOJ were stopped by career bureaucrats who took the law more seriously than Trump's concerns. Trump, as the committee made clear, will make sure that never happens again. Let Trump near the Oval Office again, you'll get a DOJ made of nothing but Jeff Clarks. That's the powerful message the committee was sending to Garland on Thursday.

"Imagine a future where the president could screen applicants to the Justice Department with one question: 'Are you loyal to me or to the Constitution?' And it wouldn't take long to find people willing to pledge their loyalty to the man," Kinzinger argued.

Leaving it to the voters to solve the Trump problem isn't enough.

Obviously, the main reason Garland should charge Trump with crimes is the overwhelming evidence of guilt and the moral duty to send the message that no man is above the law. But if the reputation of the DOJ matters so much to Garland, then he should really be worried that a free Trump is on the path to turn the DOJ into a giant agency of "fixers" focused solely on keeping Trump in power.

Leaving it to the voters to solve the Trump problem isn't enough.

As the committee hearing Tuesday demonstrated, Trump's plan to steal the 2024 election through another fake elector scheme has a high probability of working. The already too-rare public officials that could get in the way of the plot are vanishing. One could always hope that the 2024 election won't be close enough to steal. But most Americans already knew Trump was a fascist pig before January 6, and enough of them were fine with it in 2020 that he got within stealing distance. If Arizona House Speaker Rusty Bowers, a Republican, can't be talked out of voting for Trump again, despite Trump siccing violent and unhinged people on the Bowers family, then the chance of other Trump voters switching sides is dim indeed.

Kneecapping the Trump campaign with criminal charges may really be the single best chance we have of saving democracy. If democracy isn't saved, the DOJ's reputation is doomed. Next time the DOJ's integrity won't be protected by threat of mass resignations. Trump will make sure to fire anyone willing to stand up to him before it happens.

The good news is that the January 6 hearings do seem to be functioning as intended: highlighting how absurd it is that the DOJ is letting Trump and his conspirators run free. The DOJ's reputation as "apolitical" isn't doing great these days. There's a growing perception that Trump and his cronies can get away with crimes because they're rich and well-connected, which makes the DOJ look pretty damn corrupt. So it's a great relief to see that the winds are shifting and Garland, however reluctantly, is letting his staff go after higher ups in the GOP who were involved in the coup.

Just this week, many of the fake electors who were the subject of Tuesday's hearing were finally hit with subpoenas. On Wednesday, right before the committee unloaded a truck load's of evidence of Clark's role in a conspiracy to overthrow the government, federal agents raided his home:

The timing of all this doesn't really seem coincidental. The January 6 committee does seem to be shaming the DOJ into investigating criminal activity.

Kneecapping the Trump campaign with criminal charges may really be the single best chance we have of saving democracy.

There is no decision that Garland and the DOJ can make that is "apolitical." Refusing to arrest Trump in the face of overwhelming evidence of his guilt is political behavior, as it's far more about appeasing Republican partisans than it is following the law. Since every move he's going to make is going to be refracted through politics, Garland needs to worry less about "looking" political, and start fulfilling his promise to go where the evidence leads. Garland takes the reputation of the DOJ very seriously. If he wants his legacy to be the preservation of that reputation, he must charge Trump for his various crimes. Failure to do so is an invitation for Trump to come back to the White House, where he will immediately turn the Justice Department into a MAGA clown show.