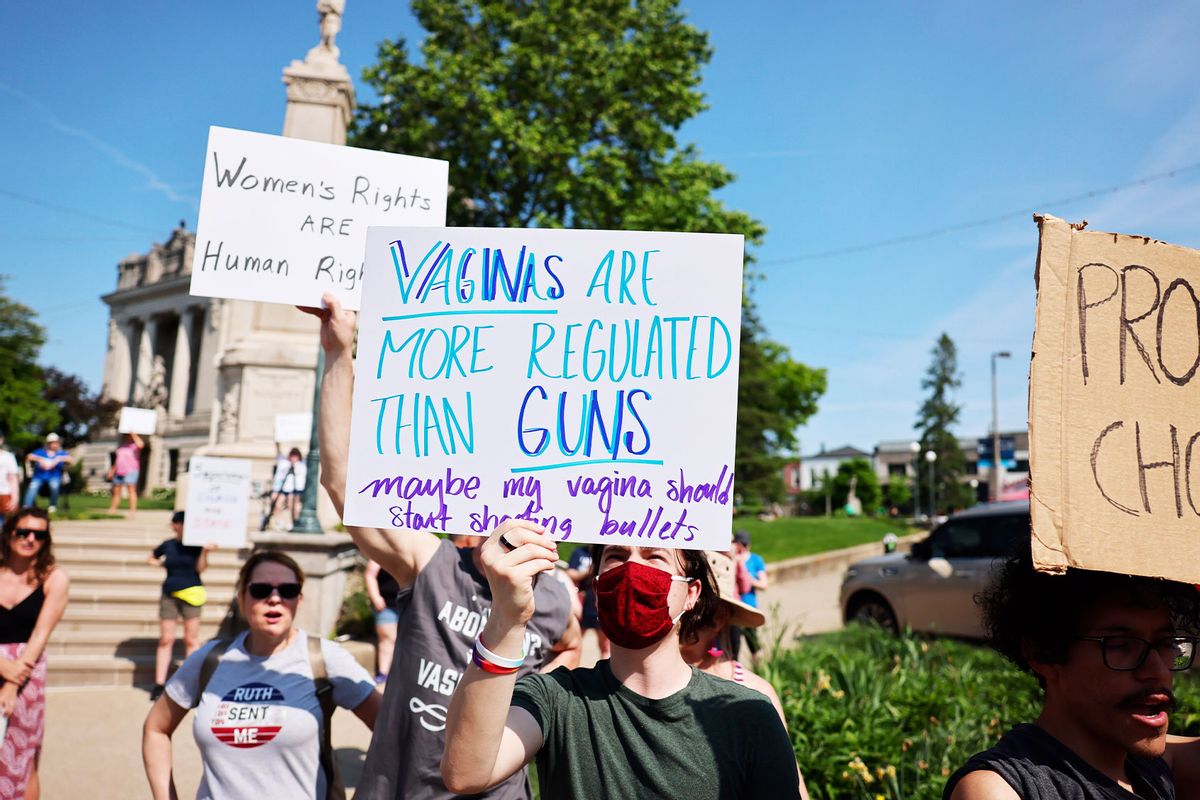 A protester holds a placard saying, "Vaginas are more regulated than guns, maybe my vagina should start shooting bullets," during a Women's March to demand safe and legal access to abortion. (Jeremy Hogan/SOPA Images/LightRocket via Getty Images)
--

In a 5-4 decision, the Supreme Court on Friday overturned the landmark 1973 Roe v. Wade ruling, eliminating the constitutional right to an abortion and sweeping nearly five decades of legal precedent aside in the process.

"The Constitution does not confer a right to abortion," Justice Samuel Alito wrote. "It is time to heed the Constitution and return the issue of abortion to the people's elected representatives."

The court's 6-3 decision in the case of Dobbs v. Jackson Women's Health Organization upheld a Mississippi law that banned most abortions after 15 weeks of pregnancy. Technically, the vote to overturn Roe was 5-4, with Chief Justice John Roberts attempting to split the difference: In a separate concurring opinion, he agreed with the majority opinion on Dobbs but argued for "a more measured course," saying he would have upheld the 1973 precedent.

With Roe v. Wade overturned, laws regulating abortion access are in the hands of the states. In 13 states — Idaho, Kentucky, Louisiana, Mississippi, Missouri, North Dakota, Oklahoma, South Dakota, Tennessee, Texas, Utah and Wyoming — "trigger laws" making abortion illegal will go into effect over the next 30 days. In three of those states — Kentucky, Louisiana, and South Dakota — the trigger laws were set to go into effect immediately.

While the details of these trigger bans vary from state to state — i.e. exceptions in the case of rape or incest, or preventing the injury or death of a pregnant person — access to abortions will be significantly curtailed.

As Salon has previously reported, many experts doubt these so-called exceptions will actually work as intended. Notably, many state trigger laws technically make providing an abortion illegal — penalizing the physicians who provide them — rather than prosecuting those getting them. Despite SCOTUS deliberations, the positive pregnancy tests haven't stopped and now many pregnant people are being forced to scramble to find abortion care elsewhere, putting many pregnant people's health at risk.

"We're getting absolutely inundated today with callers who are saying 'I just got a call from my facility, or I just called them to check in and I've learned that I'm no longer able to access care in my state,'" Rachel Lachenauer, the Director of Patient Experience at the National Abortion Federation (NAF), told Salon. "And so now we're working with them to say OK, what are the next options? We are trying to work very much on the fly today, to figure out where their next best place may be and what resources they're going to need from us to make that care possible."

The NAF operates the largest nationwide hotline for abortion referrals that can help provide financial assistance in the country. Lachenauer said previous smaller bans, like in Texas, have helped NAF set up an infrastructure to handle this moment.

Lachenauer said for weeks, the NAF hotline has seen an influx in patients calling to make alternative arrangements in states with trigger laws. Indeed, since the opinion didn't come as a surprise due to the May SCOTUS leak, abortion clinics in many states had time to prepare in anticipation for today's ruling. For some, that meant pressing pause on reservations earlier this month to allow people to make alternative plans in advance. Last week in South Dakota, the state's only clinic in Sioux Falls stopped scheduling abortion.

"Abortion care in Planned Parenthood's Sioux Falls health center is paused," Planned Parenthood's South Dakota advocate Twitter account explained on June 16. "If #SCOTUS overturns the federal right to abortion, abortion procedures must stop in South Dakota immediately. They can't in good faith schedule appointments later this month, because there is a good chance patients would have to go out of state for their abortions by this time."

Following the SCOTUS decision on Friday, the clinic announced on Twitter that their "legal team is reviewing the decision" and would share an update as soon as they've confirmed what the decision means for South Dakota.

Planned Parenthood of Wisconsin announced prior to Friday's decision that it stopped scheduling abortion procedures in the state beyond June 25, too.

"To suspend care on the same day for patients who have traveled great distance and at great cost is inconvenient in the least; traumatizing for those who are caught by surprise after a highly anticipated appointment under difficult circumstances; and dangerous for those who are in the midst of an abortion procedure," Allison Linton, PPWI's associate medical director, said in a statement.

On Twitter, Planned Parenthood clinics in Louisiana and Kentucky now are directing people who need to schedule abortions as soon as possible to AbortionFinder.org, emphasizing that it is still legal to travel to states where abortions are allowed.

Dr. Jennifer Lincoln, a board-certified OB GYN based in Portland, Oregon, told Salon via email the decision to pause abortions in states like South Dakota and Wisconsin prior to official ruling was a reflection of "the reality that we are all in and planning for what is likely to happen."

"I don't think this country is quite ready to see just how bad it is going to be; this includes the work of cancelling abortions and trying to get patients scheduled in states where they still have access," Lincoln said. "It is an utter waste of medical resources and a completely barbaric way to treat pregnant people who are no longer fully-protected citizens in this country once their bodily autonomy is stripped from them."

Lincoln emphasized that people who need to schedule an abortion in any of the trigger law states shouldn't wait to do so.

"The truth is that even if trigger laws go into effect, the options to travel (though it's definitely more work and truly isn't an option for all) and to have a medication abortion via mail-order abortion pills (if less than 10 weeks) are still on the table," Lincoln said. "If they are leaning towards medication abortion, they can also proceed with getting pills mailed to them now - in fact, anyone can get these even if they aren't pregnant in anticipation of a possible need or a friend needing it, and I actually recommend that given the impending restrictions."

Lachenauer from the NAF told Salon that pregnant people in trigger law states who need abortion care and resources to access it should call their hotline as soon as possible, especially if they need help rescheduling an abortion out of state.

"What happened today is certainly unprecedented in terms of scale, but the circumstances of facilities needing to open and close due to shifting state laws is actually not new for us," Lachenauer said. "Fortunately, we already have the infrastructure to be able to really meet the moment when patients call us with a quick-shifting itinerary of where they're going to ultimately seek care."