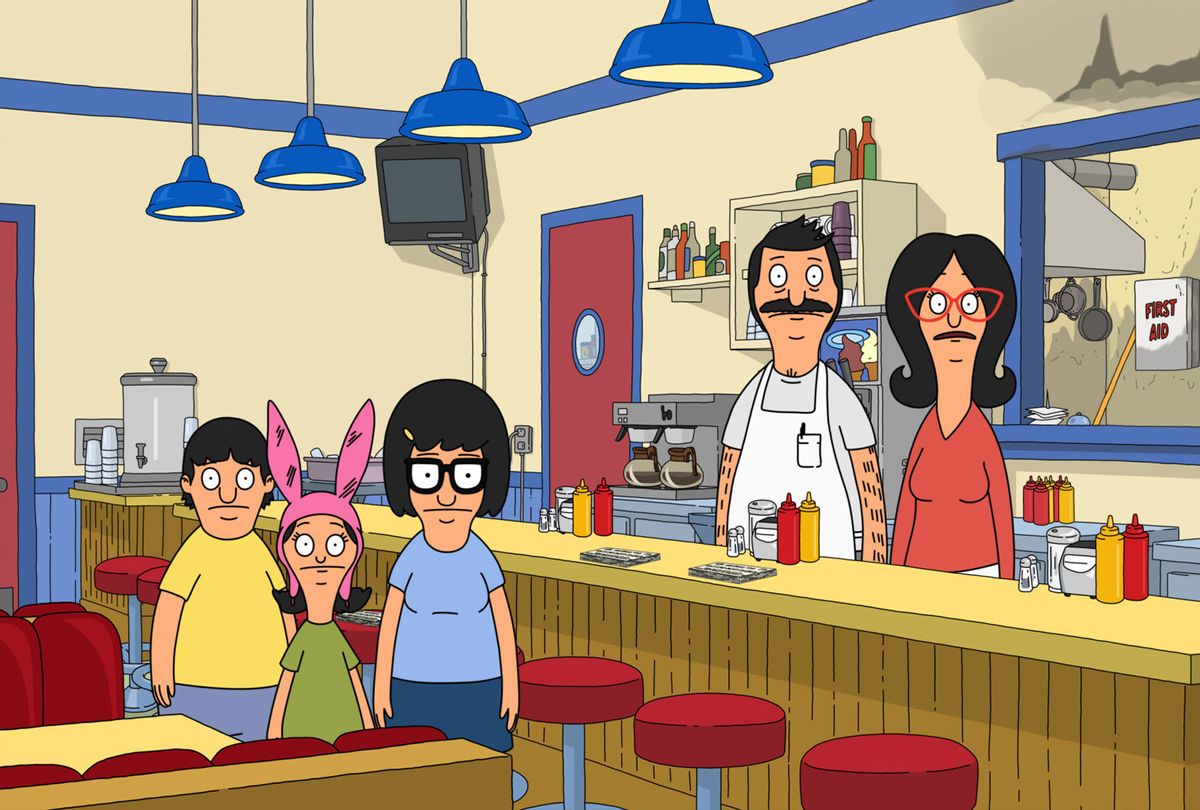 In the "Bob's Burgers" episode "Manic Pixie Crap Show," Louise (voiced by Kristen Schaal) is forced to attend a fairy-themed event in order to pay off a debt to her clingy frenemy Millie (Molly Shannon). It's a glitter-covered, tutu-enveloped extravaganza which is decidedly not Louise's scene. She far prefers her Burobu card collection and participating in Go Kart League to, as she puts it, all that "girly girly-ness."

However, that discrepancy between what Louise likes and what her peers like causes her some internal conflict, which plays out over the course of the episode, culminating in a heartwarming exchange between Louise and her older sister, Tina (Dan Mintz).

"Why have I never liked any of this stuff?" Louise asks. "I mean . . . ugh. Is there something wrong with me? Am I not being a girl right or something?"

Tina responds: "What? Louise, it's fine that you don't like it. It doesn't mean anything is wrong with you. I mean, you like your stuff like your Burobu cards, and they like their pixie princess stuff. Everyone can just like what they like and be who they are, and that's OK."

"Everyone can just like what they like and be who they are, and that's OK." – Tina Belcher

That level of joyful acceptance is overwhelmingly present in the world of "Bob's Burgers," a pun-filled town — which is nameless on the show itself, but apparently called Seymour's Bay among the writing staff — that's packed with lovable oddballs, from the Speedo-clad rollerblader who glides down Ocean Avenue to Nat Kinkle (voiced by Jillian Bell), a boisterous limo driver with a love of reptiles and waterparks.

The writers of the show have constructed a fictional community where everyone is free to be their complete selves, which is one of the many reasons that the show has developed something a special following among members of the LGBTQ community for its inherent (though often undefined) queerness.

"Before joining the show, I was a huge fan of it," said Simon Chong, the supervising director of "Bob's Burgers," in a phone call with Salon. "That was, in large part, because it was so accepting and it was very fun to see the underlying themes of acceptance."

He continued: "For me, personally, I'm gay myself and I just enjoy seeing a world where being gay — or whatever you may be — isn't questioned. It's just a very nice, inclusive world to let yourself get lost in for 20 minutes at a time." 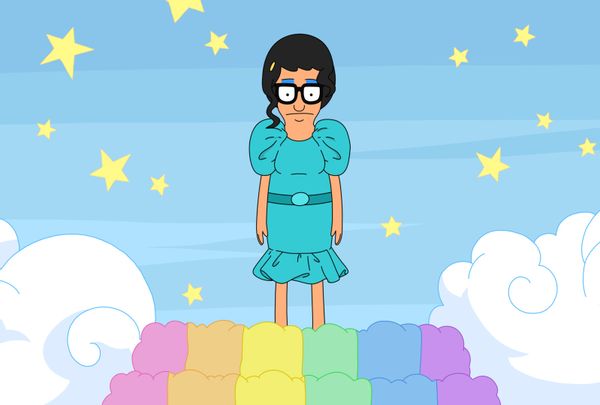 Tina in "Bob's Burgers" (FOX)From the top, as Chong puts it, the humor in "Bob's Burgers" doesn't come from punching down. This is distinct from many other popular animated family sitcoms. For instance, "Family Guy" has a long history of making homophobic jokes (all of which are frankly pretty tired). Most egregiously, perhaps, Brian the Dog was once shown vomiting for a full minute as a punchline after finding out he had slept with a trans woman.

In January 2019, executive producers Rich Appel and Alec Sulkin pledged to move away from humor that targets marginalized groups as "the climate is different, the culture is different, and our views are different."

However, as Out Magazine pointed out, that just resulted in an episode called the "Disney's The Reboot" in which regular characters Quagmire and Joe were "turned into one-dimensional gay neighbors whom Lois greets by saying: 'Oh, hello gay couple who's constantly jogging.'"

When she asks what the couple is up to that morning, Quagmire responds by saying, "Just adopting and pucker-kissing." Joe adds, "Yeah, we're network TV gay, so all we can do is adopt children and pucker-kiss, no tongue stuff."

In attempting to skewer other shows for their limited depictions of the LGBTQ community on-screen, "Family Guy" simply churned out another stereotype. Over the course of the show's 20 seasons, there has been no growth in how the writers' room depicts queer characters. This isn't the case the for "Bob's Burgers," especially when it comes to characters who are expressly queer.

Sarah — who asked to use their first name only for privacy — has been a fan of "Bob's Burgers" since they first cycled through the show in 2014 after finishing their post-doctorate degree.

Nat was "was "a lesbian from the beginning."

"I think the show's queer representation has improved remarkably," they said. "The early episode where Bob drives a cab to pay for Tina's 13th birthday party — because they have to work extra for extra money!— is both funny and amazing, but also not really the best in the way it shows the characters who are trans sex workers."

Sarah continued: "Though even then Bob doesn't react to them with disgust or stigma, but welcomes them as friends! But there's pretty significant growth in the queer characters on the show between those early days and now. I'm thinking especially of Nat, but also others." 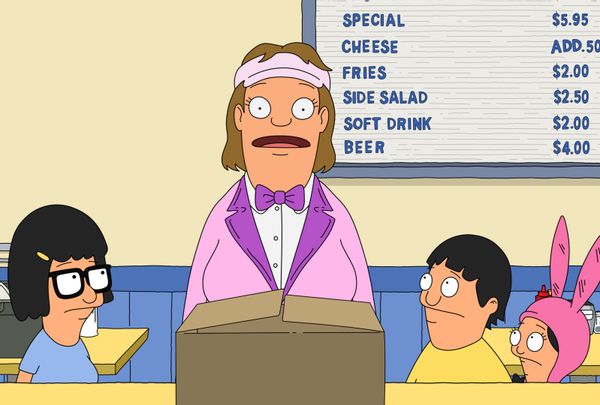 Tina, Nat, Gene and Louise in "Bob's Burgers" (FOX)The aforementioned Nat is a fan-favorite character who, according to Chong, was "a lesbian from the beginning." The boisterous limousine driver has appeared in four episodes so far, two of which center loosely around her relationships.

In "Just the Trip," the Belcher family aids Nat in returning a reptile to the exotic animal farm where her ex-girlfriend works, and Nat makes it apparent that she'd like to rekindle that relationship. In the most recent season's episode "Clear and Present Ginger," Nat again enlists the Belchers' help in a Limo Wars event in order to impress a crush and her teenage daughter.

"It wasn't mentioned in the first episode," he said. "But it's not something that was thought of afterwards where they [the series writers] were like, 'Oh, should we make Nat a lesbian?' The writers of the show and those who are directing it are very conscious of what we are putting out there in terms of what the show is, who the characters are, what they need and what they represent. We want to be respectful and we want to craft characters that people really find themselves in."

As such, Alexi Lock, a longtime fan of the show who is also an admin of a "Bob's Burgers" Discord group, said that as a pansexual man, he appreciates how the many members of the Belcher family is coded as queer. He specifically points to the Thanksgiving-themed episode titled "Turkey in a Can." After a series of mishaps that lead Bob to having to visit the butcher for multiple Thanksgiving turkeys, the butcher starts to think Bob is interested in him romantically.

Initially, he tells Bob that he has a boyfriend, but offers to set him up with a friend who likes "sloppy bears." When Bob returns a final time, the butcher admits that things actually haven't been great with his boyfriend, so says that it may be time for a change. He asks where Bob wants to go on a date.

Bob, who is flustered, but not put off, replies that he is "mostly straight," and that the butcher is "way out of his league." Bob adds he likely won't be back to buy another turkey the next day, but that he'll call him. 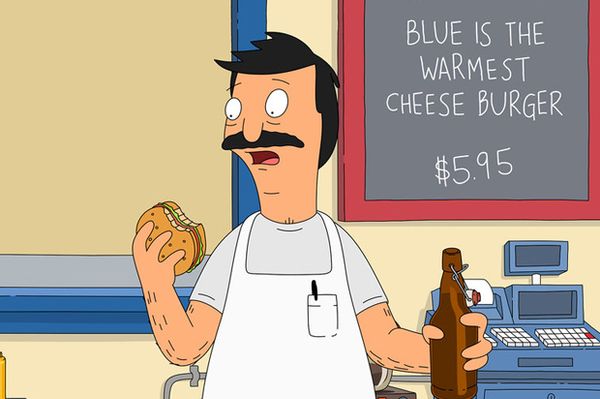 (Fox)"In the group, we also talk about how Bob has an obvious crush on Marshmallow, who is one of the glam trans sex workers he met in the episode 'Sheesh! Cab, Bob?" Lock said. "Some think Bob is bi, others say he is pan. Regardless, he's an ally."

"I read Gene as transfeminine, Louise as a lesbian and Tina as pan," they said. "Jimmy Jr. and Zeke also have some kind of clear attraction to each other and Tina, so there's a fun triad dynamic going on there."

Many fans, including Sarah and Lock, say that most episodes can also be viewed through a queer lens, which is one of the reasons that the series' ongoing Pride Month collaborations with Toddland, which was spearheaded by Chong, feels genuine.

""I read Gene as transfeminine, Louise as a lesbian and Tina as pan."

"One of my favorite episodes is the two-part Christmas episode where Linda's tree topper gets stolen and the family ends up breaking into an underground rave," Sarah said. "It ends up being this great distillation of celebrating queer spaces, queer chosen family, rejection of carceral state structures — everyone is mad Linda called the cops, even Bob — and learning how to be a better ally to marginalized communities."

Sarah points out that in this episode — which features voicework from Todrick Hall, the artist fittingly behind the song "Gay Excellence" — Bob literally uses his body to lure the police away by donning a costume and creating a distraction. 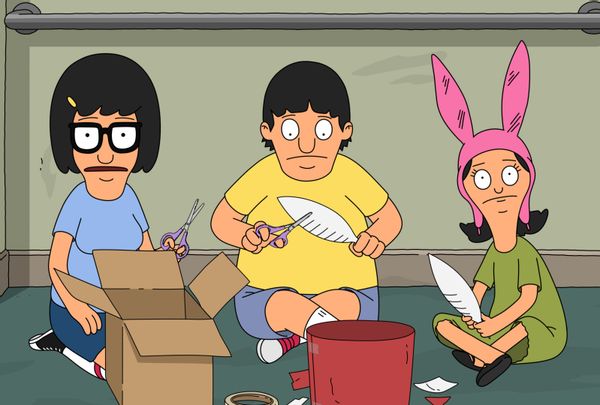 Tina, Gene and Louise in "Bob's Burgers" (FOX)"Maybe it sounds pretentious or whatever, but I could do deep reads of episodes all day," Sarah said.

But as Simon Chong points out, the show's appeal can also be distilled much more simply. It's about a supportive family, both biological and chosen, that really wants the best for those in their circle.

"They love each other and accept each other for who they are, flaws and all and whoever they may be," Chong said. "I just think that really resonates with people."

"Bob's Burgers" episodes debut on Fox before streaming on Hulu. "The Bob's Burgers Movie" is now showing in theaters. It will be available to stream on Hulu and HBO Max on July 12.