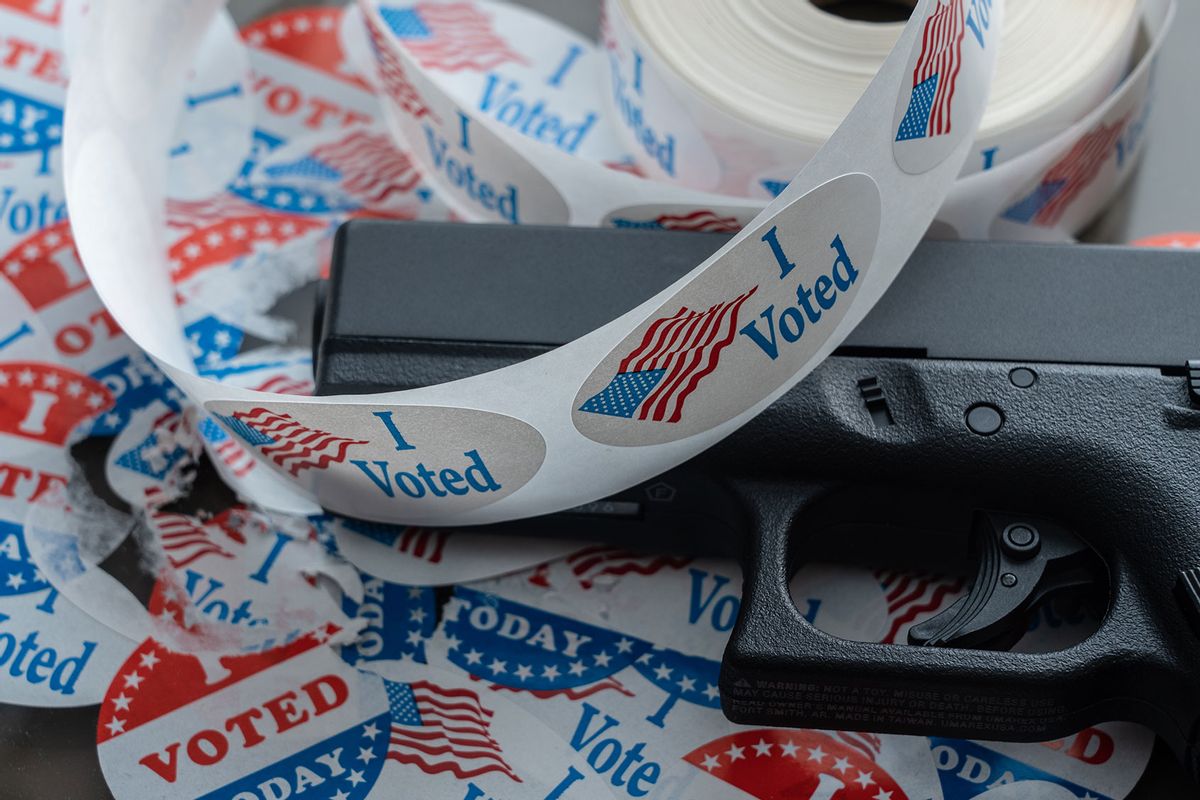 I Voted stickers with a handgun (Getty Images/BackyardProduction)
--

A Republican Bitcoin enthusiast and self-professed "cypherpunk stockbroker" running to represent New Hampshire in the U.S. Senate would like to give American citizens unfettered access to military-grade weaponry like machine guns, bombs, explosive missiles, and chemical weapons.

Bruce Fenton, who cast his self-funded bid for the GOP nomination earlier this year, unveiled his maximalist stance on the Second Amendment during an April interview with Liberty Block, a "pro-liberty" media publication based in New Hampshire.

"I don't want to see any government regulations on guns. Period," he said in an interview flagged by American Bridge, a Democratic Super PAC. "Firearms should be unrestricted and completely available in the United States and I am against the current firearms regulations."

RELATED: Clarence Thomas' gun decision ensures that the next January 6 will be much deadlier

Fenton is one of five Republicans vying for the chance to take on U.S. Sen. Maggie Hassan in November. The GOP candidates are set to hold their first debate of the GOP Senate primary on Monday.

Specifically, Fenton has vowed to abolish the National Firearms Act (NFA), a 1934 law that regulates the ownership of machine guns, short-barreled rifles, short-barreled shotguns, suppressors, and destructive devices like grandes explosive missiles. At present, the NFA requires owners of such weaponry to submit their fingerprints, undergo a background check, pay a $200 fee, and register all of the above contraptions with the National Firearms Registration and Transfer Record (NFRTR). In an ideal world, all of these requirements would not exist, Fenton said in a Twitter exchange with Salon.

"I believe that the Second Amendment should be followed and that the right to bear arms should not be infringed," he said. "Government doesn't have a moral right to have a monopoly on force. Gun restrictions are a tool of tyrants."

Robert Spitzer, a political science professor who specializes on gun politics at the State University of New York (SUNY) at Cortland, told Salon by email that Fenton's plan would make automatic weapons, sawed-off shotguns, and silencers "easily accessible to those who want them."

RELATED: The Rittenhouse syndrome: Has America crossed the Rubicon?

Fenton's remarks come as state and federal Republicans mount a broad campaign to expand gun rights across the country. This year, GOP-led states like Iowa, Tennessee, and Indiana successfully removed requirements to acquire and carry firearms despite the upsurge in mass shootings, of which there have already been more than 250 this year, according to The Washington Post.

The conservative-led gun rights movement has even made its way to the Supreme Court, which just last week struck down a New York gun law that requires would-be gun owners to establish "proper cause" for open carry licenses.