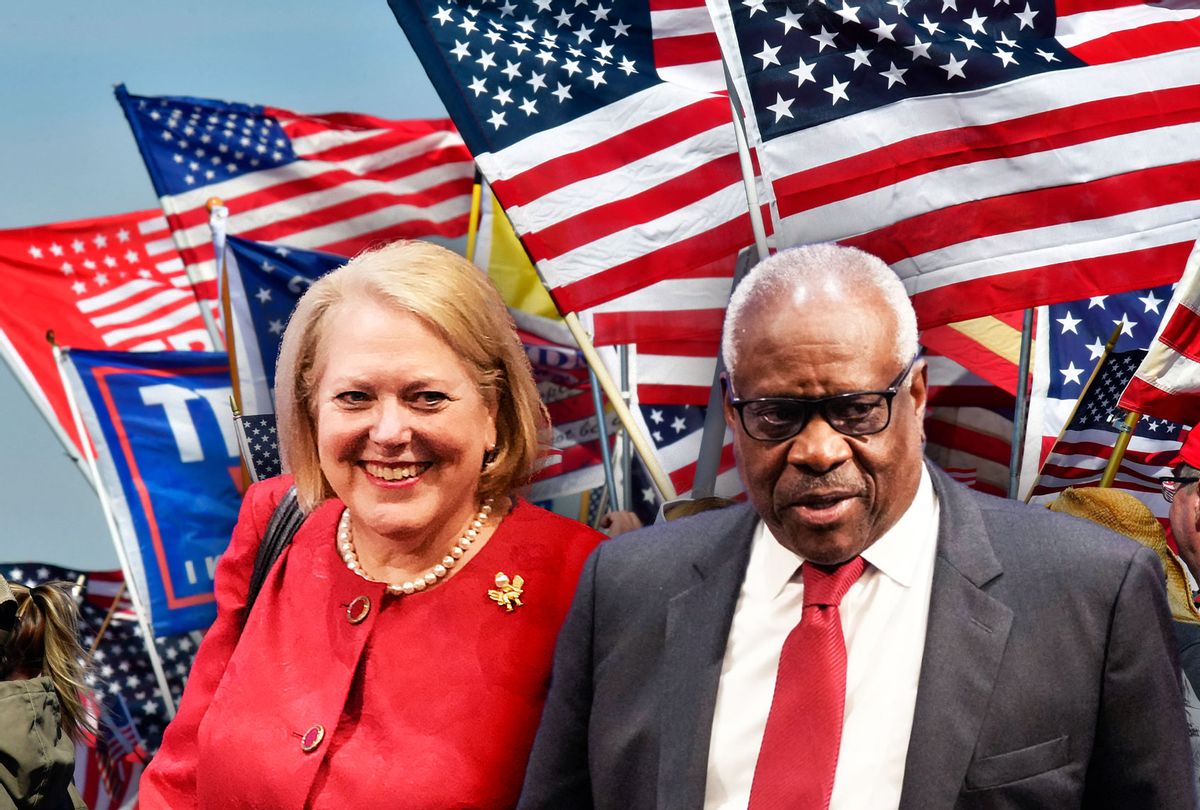 Virginia and Clarence Thomas | Supporters of the "Peoples Convoy" wave US flags as the truck convoy heads east on Interstate Highway 70, on March 1, 2022, near St. Jacob, Illinois (Photo illustration by Salon/Getty Images)
--

You have to hand it to Clarence and Ginni Thomas: Their marriage is an exemplar of spousal teamwork. Ginni Thomas worked hard on the inside game for Donald Trump's coup: exchanging emails with Trump co-conspirator John Eastman, pressuring state legislators to throw out electors that President Joe Biden won and blitzing Trump's chief of staff Mark Meadows with potential coup strategies. Meanwhile, her husband just handed the Trump's volunteer street fighters, the sort of folks that stormed the Capitol on January 6, a Supreme Court decision that will make it much easier for them to arm themselves with heavy firepower in the future.

The radical implications of Thursday's Supreme Court decision in New York State Rifle & Pistol Association Inc. v. Bruen, in which the Supreme Court struck down New York's strict regulations on who can carry guns in public, are only starting to be understood. As Slate's legal expert Mark Joseph Stern wrote, this decision doesn't just strike down restrictions on concealed carry in some of the largest states in the country, it's "a maximalist opinion by Justice Clarence Thomas that renders most of the nation's gun control laws presumptively unconstitutional." The gun safety bill that President Joe Biden signed Friday is frustratingly limited in scope, but even its modest efforts to keep guns out of the hands of unstable people may not pass this new court test laid out by Thomas.

In threatening huge swaths of existing gun safety law, the Thomas decision also imperils the gun law that kept the Jan. 6 insurrection from being much deadlier than it already was. In doing so, Thomas opens the door for right-wing terrorists to plot more schemes and more violence in Washington D.C. and elsewhere — only this time with more firepower.

Thomas made it very hard, if not impossible, for lower courts to uphold most gun restrictions, including bans on unlicensed carry

There were some folks who brought guns into the Capitol on January 6, but by and large, they didn't. Even though groups like the Proud Boys and the Oath Keepers carefully planned the attack, the weapons they brought were mostly not firearms. They were bear spray, clubs, knives, that sort of thing. The melee led to the deaths of five people and injuries to over 100 Capitol Police officers, but it would have been significantly worse if the insurrectionists had mounted an gun-powered incursion. There would have been firefights with Capitol Police. The insurrectionists might have been able to get past police barriers. They may have even successfully reached members of Congress and Vice President Mike Pence, whose murder they were openly braying for.

None of that happened, however, and the reason is simple: Washington D.C.'s strict law banning most people from carrying arms in public.

At first blush, that may not seem to make a lot of sense. Groups like the Proud Boys and Oath Keepers came to town with the explicit intention to overthrow the election, which is a crime. So then why would a bunch of people planning a serious crime — many have been charged with seditious conspiracy — be worried about breaking more minor laws about carrying guns in public?

Again, the answer is simple: They didn't bring guns because they were afraid of being arrested before they had a chance to riot.

Oath Keeper text messages obtained by federal investigators demonstrate that the group's leader, Stewart Rhodes, was deeply concerned about keeping his people out of jail before they had a chance to storm the Capitol. Rhodes warned them not to violate D.C.'s gun laws.

"DO NOT bring in anything that can get you arrested," he texted. "Leave that outside D.C. THEY HAVE SEARCHED VEHICLES IN GARAGES. And four so far, to our knowledge, have been arrested."

In the ensuing exchange, Rhodes and other Oath Keepers plot out what weapons they can smuggle in that are legal in D.C.: utility knives, collapsible batons, and heavy flashlights were recommended. And no doubt those weapons, as well as improvised ones such as bike racks and flagpoles, did serious damage to the police who defended the Capitol that day. But only one person was actually shot that day: Ashli Babbitt, an insurrectionist who was lawfully killed by an officer to prevent her from leading a charge of insurrectionists to chase down fleeing members of Congress. As the text messages from the Oath Keepers make clear, the only thing that kept insurrectionists from storming the Capitol with guns was the D.C. ban on carrying guns. Indeed, the group had a huge weapons cache stashed at a nearby hotel, right outside the city limits. As reported by Politico, "Three 'quick reaction force' teams set up at the hotel, prepared to ferry weapons into Washington to support the effort to prevent Congress from finalizing Biden's victory."

As Ian Millhiser of Vox explained, laws similar to the New York law "exist in five other states — California, Hawaii, Maryland, Massachusetts, and New Jersey — plus the District of Columbia." In the short term, there won't be a huge change, since carrying without a license is still illegal. But, as Stern notes, the writing is on the wall: Thomas made it very hard, if not impossible, for lower courts to uphold most gun restrictions, including bans on unlicensed carry. And, by writing this decision, Thomas has invited such future litigation, so there is likely to be a massive flood of lawsuits against all manner of gun laws now.

While the rest of us have to live in the increasingly violent society caused by loosening gun laws, Supreme Court justices get taxpayer-funded elite security protection.

It's not a coincidence that the justice who just made it a lot easier for right-wing terrorists to operate is married to one of the most prominent cheerleaders for Trump's coup. It's long been an article of faith on the right that the Second Amendment's purpose was as some kind of check on government overreach, an especially ironic stance as they are the side that is currently installing the undemocratic tyranny they always claim to be armed against. It's a claim that never made sense, as the the very first president, George Washington, put down an anti-tax rebellion. In reality, the Second Amendment was written mostly so that Southern states could swiftly put down slave rebellions.

Today's gun nuts are more in line with their slave-owning predecessors than they are with the empty "freedom" rhetoric that they espouse. The insurrection and the Big Lie are all about enforcing white supremacy. Thomas likely knows this and doesn't care, secure in the knowledge that his usefulness to the cause means he's personally spared the racist abuse and violence that his wife's beloved and ongoing coup is fomenting.  After all, while the rest of us have to live in the increasingly violent society caused by loosening gun laws, Supreme Court justices get taxpayer-funded elite security protection.

Thomas is no idiot. He knows that right-wing groups across the country are arming themselves heavily and that, with Trump's cheerleading, they intend to keep using violence to aid the very same anti-democratic efforts his wife Ginni is still engaged in. So Thomas' radical anti-gun control opinion cannot be read in a vaccum. It should instead be seen as part of a larger push by the Thomases and their right-wing allies to destory democracy so that an authoriarian, paranoid, and well-armed minority can rule over the rest of us.