"This is some bullsh*t," said Democratic Senate candidate Charles Booker, calling it a "complete slap in the face" 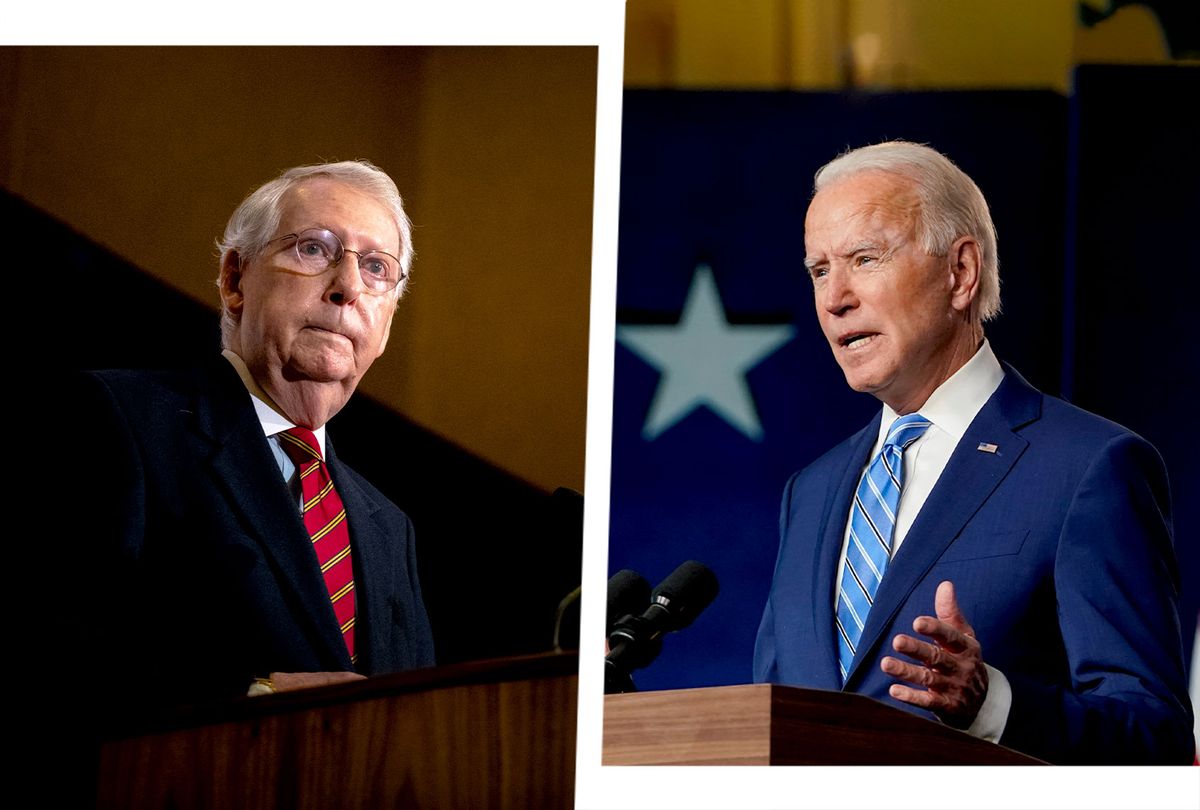 President Joe Biden reportedly cut a deal with Senate Minority Leader Mitch McConnell, R-Ky., to appoint an anti-abortion judge in Kentucky, according to the Louisville Courier-Journal.

Kentucky does not have any judicial openings but under the deal reported by the outlet, Biden would nominate Federalist Society member Chad Meredith, an anti-abortion attorney, when a vacancy comes up. Under the deal, McConnell agreed not to hold up Biden's future federal nominations, according to the report.

Rep. John Yarmuth, D-Ky., told the outlet that he "strongly opposes" the trade.

"Given that a judicial position isn't currently open on the Eastern District Court, it's clear that this is part of some larger deal on judicial nominations between the president and Mitch McConnell," he told the outlet. "The last thing we need is another extremist on the bench."

The deal comes after the Supreme Court overturned federal abortion protections last week. Biden vowed after the decision to "do all in my power to protect a woman's right in states where they will face the consequences of today's decision."

Meredith in 2018 defended the law in court, arguing that "not every patient understands the consequences of the abortion procedure."

"This is right in the heartland of what states are permitted to do to regulate medicine," he said at the time. "There are a number of patients who don't understand the nature of the fetus within them."

In 2019, he represented Bevin in a case seeking to require abortion clinics to have written transfer agreements with a hospital and ambulance service, according to the Associated Press. A judge blocked the law, writing that it would effectively eliminate abortion in the state. Meredith argued that the impact of shuttering the state's last abortion clinic would be "essentially none" because women would still have access to out-of-state clinics.

Kentucky Right to Life, an anti-abortion group, in 2020 praised Meredith for defending the state's abortion restrictions.

He is listed as a contributor to the Federalist Society, a conservative group that has played a key role in stacking the Supreme Court with anti-abortion judges ahead of last week's Dobbs ruling overturning federal abortion rights.

"Lifetime appointments to federal courts for people with records like Chad Meredith are unacceptable and the reason we have lost the federal right to abortion," the group said on Twitter. "We deserve better."

"At a time when we are fighting to protect human rights, this is a complete slap in the face," he tweeted. "This is some bullshit."

"Biden is under a lot of pressure to fill the current court vacancies he has with judges who are friendly to reproductive rights. And instead, he is making deals with McConnell to allow more anti-abortion judges into the fray," Bassett wrote. "There is no excuse for it."

Biden has come under pressure to act in response to the assault on reproductive rights but the White House has been tamping down expectations. Vice President Kamala Harris said the administration is not discussing a proposal from progressives to allow abortions on federal land in states where the procedure is banned.

The White House is instead pursuing a "more limited set of policy responses while urging voters and Congress to act," Reuters reported on Wednesday. The administration plans to issue several executive actions and vowed to support medical abortion and protect who travel across state lines to get the procedure, according to the report.

McConnell, meanwhile, has staked his legacy on his judicial machinations. On Wednesday he touted his decision to block former President Barack Obama's Supreme Court nomination of Merrick Garland because it helped lead to the overturn of abortion rights.

"It's the single-most consequential decision I've made in my public career," McConnell said, according to Bloomberg, calling last week's ruling "a huge step in the right direction."