Post-Roe, waiting periods for abortions will be even more dangerous 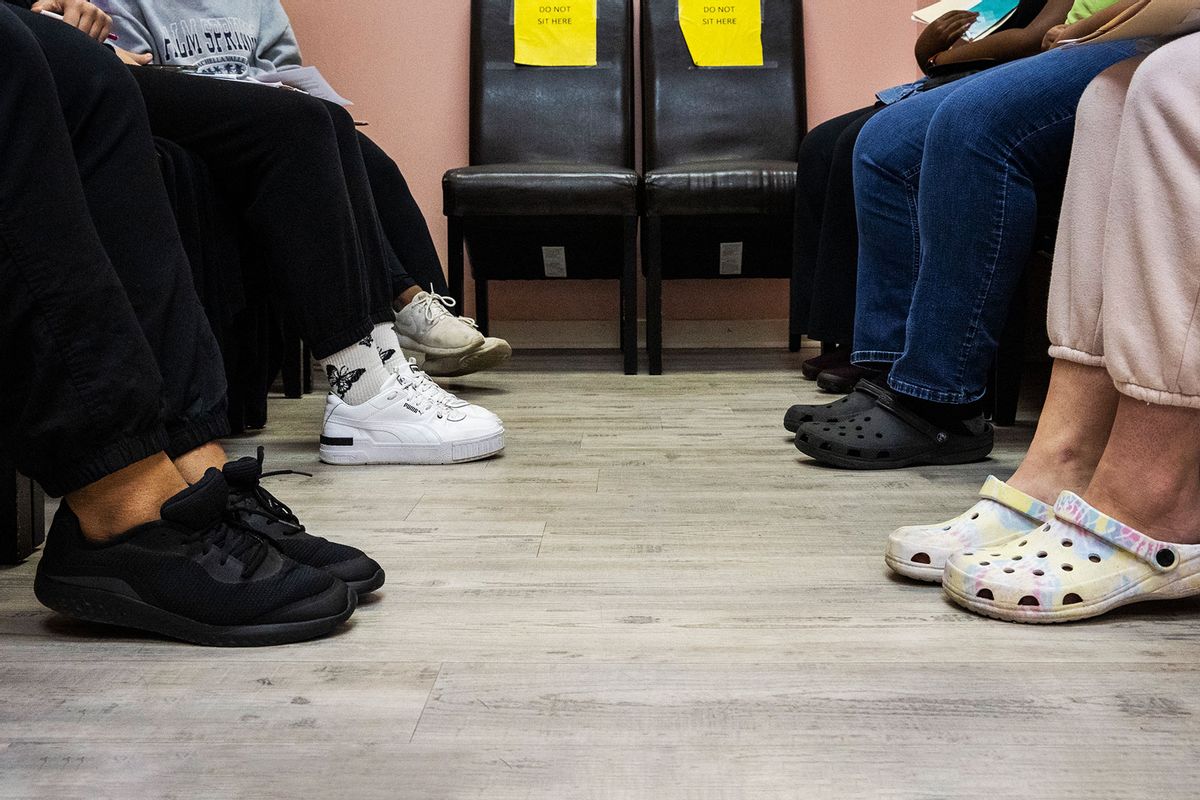 Patients gather in the counseling area at one of the last remaining abortion providers in the South, at the Jackson Women's Health Organization also known as The Pink House in Jackson, MS on June 7, 2022. Every month, Dr. Hamlin travels from Massachusetts to Mississippi to work a three-day shift at the clinic, part of a rotating schedule of doctors who travel out of state to provide healthcare at The Pink House. (Erin Clark/The Boston Globe via Getty Images)
--

Since Roe v. Wade was overturned by the U.S. Supreme Court, there have been many questions around where abortion is legal and under what parameters as abortion access is now in the hands of the states.

Currently, the landscape around this is changing quickly state by state as abortion advocates try to stall or block state bans. According to The New York Times' tracker, abortion is prohibited in eight states— many of which have no exceptions for incest or rape. And trigger laws prohibiting abortion are coming soon for at least five more states in the next few days to weeks, as a handful of bans are being held up or blocked by the courts. As the situation unfolds, the role and purpose of a "waiting period" —  which is the amount of time a person seeking an abortion must wait to undergo an abortion after an initial consultation — in these laws is being revisited.

RELATED: The hell and high water of forced birth

"Requiring a waiting period adds to the already high burden that exists to access abortion care for people who are pregnant,"  Dr. Melissa Simon, an obstetrician gynecologist at Northwestern Medicine, told Salon

"Requiring a waiting period adds to the already high burden that exists to access abortion care for people who are pregnant,"  Dr. Melissa Simon, an obstetrician gynecologist at Northwestern Medicine, told Salon via email. "This burden falls on people who have lower resources, those who are already facing distrust with the medical system, those who are in rural areas, those who identify as sexual and gender minority, those with disabilities, and those who are minoritized."

"With access compromised, waiting periods make accessing care even more burdensome," King told Salon. "Consider someone having to travel to another state where abortion is available, but requires a waiting period— that adds cost and time."

As of July 1, 28 states have mandated waiting periods that range from 24 hours to 72 hours, according to Guttmacher Institute. Fifteen of those states require people seeking an abortion to be counseled in person before the waiting period begins, requiring two separate trips to the facility. As Guttmacher explains, these waiting periods serve no medical purpose and are almost not required for any other medical procedure.

"There is no medical benefit to forcing a person desiring or needing an abortion to wait," Simon said. "In fact, requiring a wait period is a dangerous practice."

In 2018, an expert panel summoned by the National Academies of Sciences, Engineering and Medicine found that requiring a waiting period before receiving an abortion increased the risk of complications and the cost of the procedure. There are cases where they could be life threatening, too, especially in a post-Roe world.

"Adding a waiting period to the travel required to go to a state that has no abortion ban could pose serious risk to a pregnant person's life," Simon said, providing an example of a pregnant person who has an underlying medical condition and will need a termination of pregnancy to protect the mother's health and or life. "Severe pulmonary hypertension or some types of Marfan Syndrome with substantial dilation of the Aorta are two examples of conditions which pose high risks of dying as the pregnancy progresses."

Dr. Jonas Swartz, an assistant professor in the Department of Obstetrics and Gynecology and a researcher in reproductive health equity issues, said in a statement prior to Roe being overturned that he was concerned about how additional restrictions — on top of a 72 hour waiting period— could further restrict abortion access in North Carolina.

"North Carolina has a three-day waiting period, which is among the longest in the nation, where women have to receive counseling and then can receive an abortion," Swartz said. "When we want to perform an abortion for someone whose health is highly at risk before that three-day window, we need the certification of two doctors; those sorts of restrictions make people scared to practice good medicine."

In North Carolina, people are allowed to get an abortion up to 25 weeks— but as Swartz alluded to, it's not easy. Biased counseling and a state-mandated script, as explained by NARAL Pro-Choice America, is required. As the local newspaper Port City Daily reported, North Carolina is expected to see an influx in people from out of state seeking abortion care. Waiting periods started to pop up in various states as a response to widening abortion access after Roe v. Wade gave Americans the constitutional right to an abortion. Since then, many waiting periods are coupled with biased, anti-choice counseling.

"Mandating delays for abortion implies that women who seek abortions do so without adequate reflection and are incapable of making reasoned, moral decisions regarding their health and future," the The American Civil Liberties Union states. "In reality, almost all women, by the time they arrive at a clinic, are very clear about their reasons for wanting an abortion."

Indeed, King reiterated in the case where someone is traveling— a person's decision has been made.

"If [a] patient has reached their decision with enough certainty to travel a great distance to access care, surely a waiting period is of little utility except to delay or hamper access to health care," King said.