A surgeon explains why AR-15-style rifles are so deadly

“It's not uncommon to see bones that are disintegrated,” one doctor told Salon 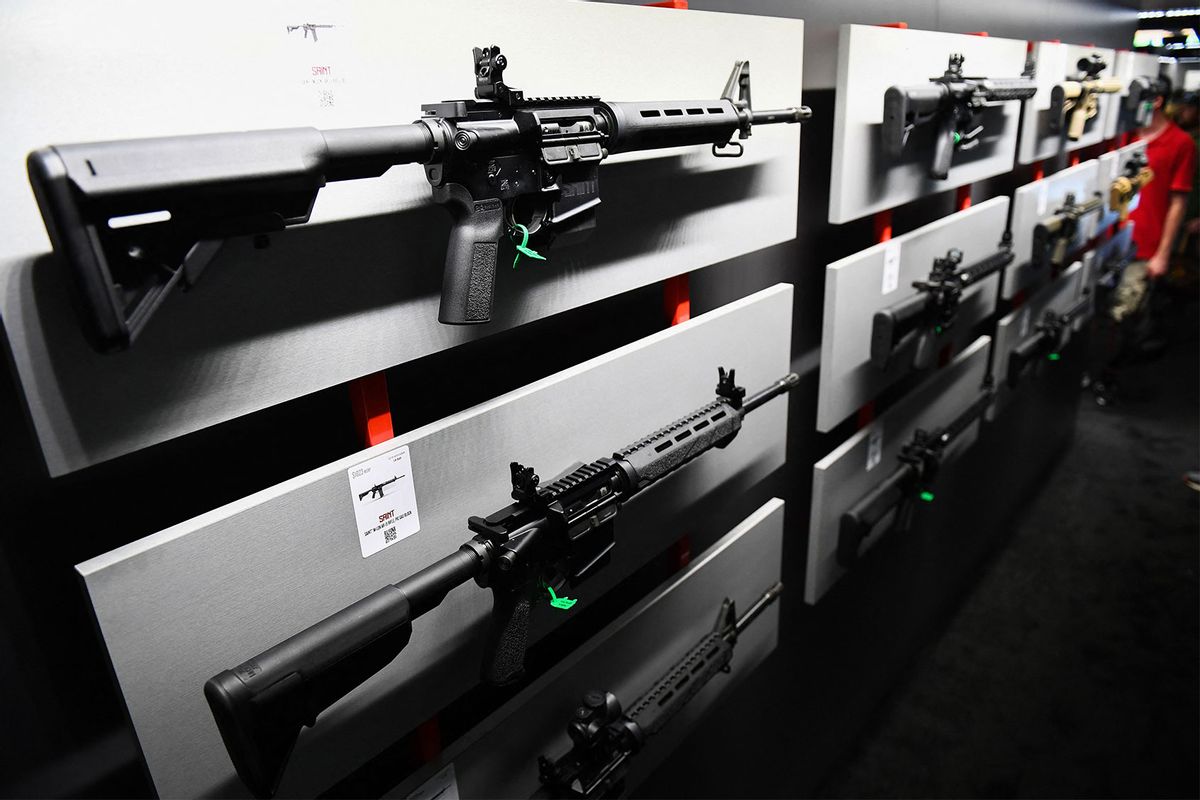 AR-15 semi-automatic rifle is displayed on a wall of guns during the National Rifle Association (NRA) Annual Meeting at the George R. Brown Convention Center, in Houston, Texas on May 28, 2022. (PATRICK T. FALLON/AFP via Getty Images)
--

The semi-automatic weapon known as an "AR-15-style" rifle has become synonymous with mass shootings in America. Indeed, this style of gun is often in the news for being the gun of choice for many mass shooters.

Most recently, the weapon used during the mass shooting at a suburban Fourth of July parade in Highland Park, Illinois, was a Smith & Wesson M&P15 — an AR-15 style semi-automatic rifle made by gun manufacturer Smith & Wesson. In Uvalde, Texas, an AR-15-style rifle was used to fatally shoot nineteen students and two teachers at an elementary school. An AR-15-style rifle was also used in the Sandy Hook massacre.

The "AR"  in "AR-15" rifle stands for ArmaLite rifle, which is the name of the company that developed the weapon in the 1950s. The term "AR-15-style" is now used to refer to any rifle of that style. The original rifle was made for military use, but when the company failed to get buyers, it rebranded it for civilian use. Today, there are many different AR-15-style rifles on the market. According to the National Shooting Sports Foundation, there are an estimated 19.8 million AR-15 style rifles in circulation in the country — a significant increase from the 8.5 million that were circulating before the federal assault weapons ban expired in 2004.

As AR-15s are repeatedly used in mass shootings across the country, doctors have spoken up on what treating patients with injuries sustained by these weapons are like— and how these wounds are more severe and disconcerting than, say, from a knife or handgun.

"In a typical handgun injury, which I diagnose almost daily, a bullet leaves a laceration through an organ such as the liver," Heather Sher, a radiologist who treated victims of the Parkland shooting in 2018, wrote in The Atlantic. "To a radiologist, it appears as a linear, thin, gray bullet track through the organ. There may be bleeding and some bullet fragments."

But when she looked at a CT scan from one of the Parkland victims, who was shot by an AR-15-style rifle, "the organ looked like an overripe melon smashed by a sledgehammer, and was bleeding extensively." She was amazed at how a gunshot wound could cause so much damage.

A semi-automatic weapon like an AR-15-style one automatically reloads after each shot, and can hold around 30 bullets before the shooter needs to reload the gun. Besides its efficiency, what makes an AR-15-style rifle dangerous is that it has a higher muzzle velocity, meaning that a bullet travels nearly 3,000 feet per second. For comparison, a ​9-millimeter handgun's bullets travel at 1,200 feet per second.

Dr. Joseph Sakran, director of emergency general surgery at Johns Hopkins Hospital and a gun violence survivor, told Salon in an interview to think about the injuries sustained by an AR-15-style rifle as if there are two types of cavities created by the weapon.

"Depending upon the trajectory, if it goes through a named artery or a vital organ, you can imagine that trajectory of simply that bullet and that permanent cavity is going to cause life threatening damage," Sakran said. The second cavity he likened to when a big boat leaves behind a bumpy wake in a lake. ""You have bullets that are traveling at high speeds that result in a significant amount of energy distributed to the surrounding tissue, causing this temporary cavity that causes a significant blast injury that can be very, very deadly and cause significant injury."

Sakran said when treating patients who have been shot with AR-15-style guns, the "destruction is much greater" than that caused by a handgun. Sakran said body tissue can be so "destroyed and pulverized" that it is hard to treat.

In other words, these fast-moving bullets essentially create shock waves in the body that cause tremendous damage to organs and tissue. Since different types of AR-15-style rifles use different kinds of bullets, Sakran said the severity of the injury to the permanent cavity can depend on the bullet. But the velocity is a huge factor, regardless of bullet size.

Though we know that the speed of the bullet makes them tear through organs in a much more dramatic fashion, it is hard to quantify the likelihood of surviving a shot from an AR-15-style rifle due to all the other compounding factors.

"I think it's hard to really kind of put into numbers, the likelihood of surviving, because it's so dependent upon trajectory," Sakran explained, providing an example of being shot, but the bullet grazes the top of his flesh. "I'm going to have a flesh wound, but if that is a little bit lower, say into a different angle, and it gets my femoral artery, then my risk of death has just gone up."

"It's not uncommon to see bones that are disintegrated," Sakran said.

Survival could depend on if a main vessel is hit or not. Still, Sakran said when treating patients who have been shot with these kinds of guns, the "destruction is much greater" than that caused by a handgun. Sakran said body tissue can be so "destroyed and pulverized" that it is hard to treat.

"It's not uncommon to see bones that are disintegrated," Sakran said. "You can have tissue that looks incredibly jagged and just even has become necrotic in how it looks and how it feels because, again, that energy and that blast effect has really impacted and caused this kind of cavitation that occurs."

Sakran said this kind of sustained injury can be especially life-threatening in children.

"In children, you can imagine that their vital organs are much more narrowly condensed, right?" Sakran said. "It's not a surprise how devastating these injuries are for children."

Though the protocol is the same for gunshot victims regardless of the specific weapon, Sakran said that when he's treating a victim of an AR-15-style rifle, in the back of his mind he knows the injuries are more likely to be life-threatening.

"I know that I'm probably about to face really significant intra abdominal injuries or this is going to require some extensive operative intervention to save this person," Sakran said. "It is just very clear to me that the amount of death and destruction that one can cause with an assault-style rifle cannot be compared to someone [hurt] with a knife or even a handgun."