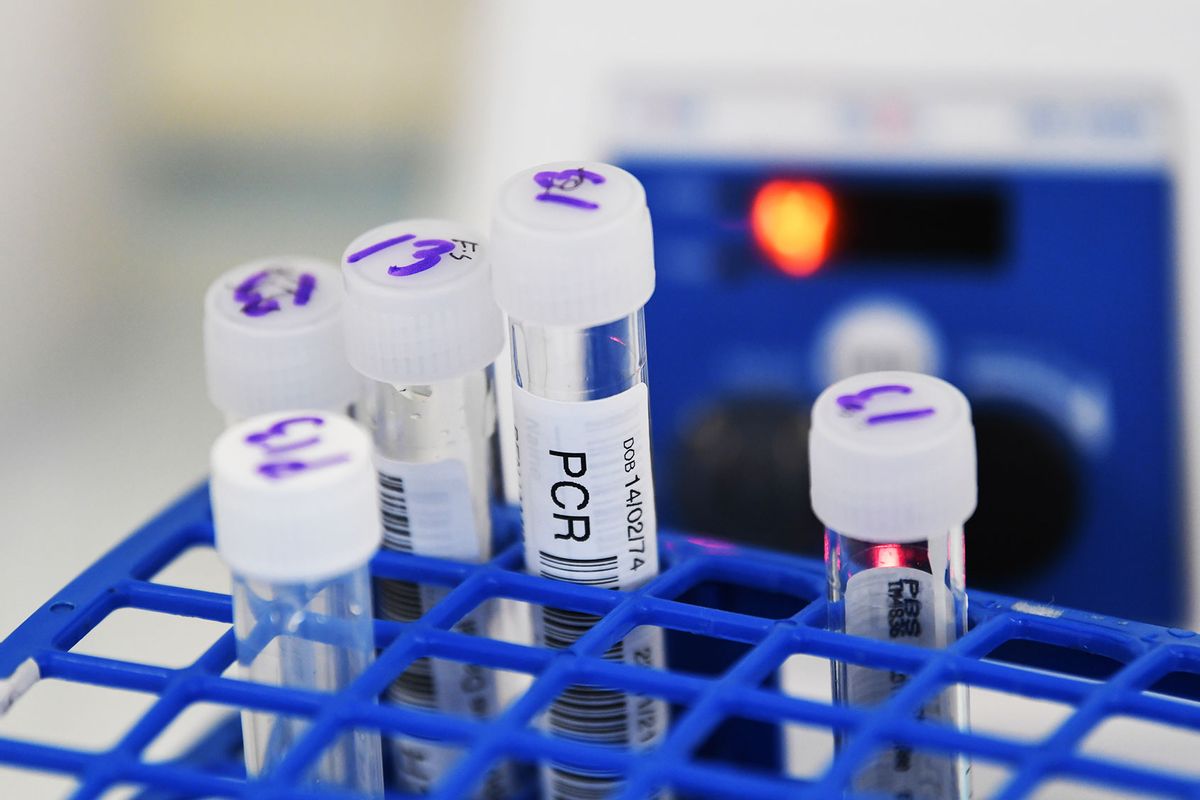 PCR tests inside vials awaiting testing inside an on-site laboratory for COVID-19 beside the departures hall at Sydney Airport on November 23, 2021 in Sydney, Australia. (James D. Morgan/Getty Images)
--

The COVID-19 pandemic has seen the rise and fall of many variants, but nothing like BA.5.

Previous subvariants of omicron have caused cascading surges as they outcompeted each other; now, BA. 5 is the latest mutation to take hold around the world. Its success in spreading is due in part to its unique mutations that make it capable of evading immunity from previous infections and vaccines. It is also the most transmissible variant, even more so than its predecessors BA.1 and BA.2 that fueled surges over the summer — and which were already the most contagious viruses ever known.

"We do know [BA.5] to be more transmissible and more immune-evading," Centers for Disease Control and Prevention (CDC) Director Rochelle Walensky said last week. "People with prior infection, even with BA.1 or BA.2, are likely still at risk for BA.4 and BA.5."

According to the CDC, BA.5 made up nearly 65 percent of the coronavirus infections in the United States nearly two weeks ago. As Salon has previously reported, and as experts have widely commented on, the actual number of people infected with COVID-19 is likely much higher than what the CDC reports because of the prevalence of at-home antigen tests, which can sometimes yield false negatives. Likewise, those who test positive on an at-home tests don't generally report their results to any public health agency, meaning they may not contribute to countywide infection counts.

Detecting a specific variant, and detecting COVID-19 overall, are different things; and even if PCR tests can't differentiate between which variant a patient has, they are still extremely reliable when it comes to detecting a SARS-CoV-2 infection of any variant.

Highly accurate lab tests done in hospitals and clinics, known as polymerase chain reaction (PCR) tests, do typically record results and send them to public health agencies. While PCR tests are considered extremely reliable, misinformation has been swirling around this new variant and its relationship to testing — including some prominent rumors that PCR tests won't detecting the BA.5 variant, or may yield false negatives.

The confusion may stem in part from a nickname given to this strain. Many news outlets have given BA.5 the moniker "stealth omicron" — partly because, like its predecessor BA.2, it has become harder to identify the variant on PCR tests. But detecting a specific variant, and detecting COVID-19 overall, are different things; and even if PCR tests can't differentiate between which variant a patient has, they are still extremely reliable when it comes to detecting a SARS-CoV-2 infection of any variant. Thus, the "stealth" appellation implies a tendency not to evade a PCR test — the patient will still test positive — but to not reveal precisely which variant it is to the PCR test.

"When you look at a PCR test, it has multiple targets, and when multiple targets turn positive the test it tells you its SARS-CoV-2," Dr. Amesh Adalja, a senior scholar at the Johns Hopkins Center, explained to Salon.

But one of the ways scientists could tell that a PCR test was picking up, say, BA.1, was because it exhibited what is called a "S gene target failure."

"That target would always be negative, so you'd know it was likely BA.1, and then when BA.2 came around, it didn't have an S gene target failure — so you couldn't just look at the PCR test and say 'oh, this is BA.2.'"

Hence, the "stealth" nature of the variant.

As the FDA explains, PCR tests with "multiple targets" are "more likely to continue to perform well when new variants emerge." The agency has a list of PCR tests that function by testing multiple targets on its website.

Similarly to BA.2, BA.5 doesn't have the S gene target failure, meaning that PCR tests that look for multiple targets likely won't be able to specifically identify that the variant they have is BA.5. However, PCR tests will still pick up if and when a patient is infected with SARS-CoV-2.

This is all to say that PCR tests are still at risk of perhaps being less effective and less accurate as future variants emerge.

"If there is some new variant that emerges, you run the risk of losing that primer and then your test is no longer detecting things anymore," Hafer said, adding this isn't a unique situation to omicron. "It's been a concern throughout the pandemic."

"Every company or lab that's doing a PCR test should really be careful when they design their primers that they're making them in a sequence of the virus that may be less likely to mutate, and then they should be checking their their primers periodically against databases that are out there have varying sequences that are circulating out in the community," Nathaniel Hafer, an assistant professor in molecular medicine at University of Massachusetts' Chan Medical School, told Salon. "And if they see the potential for these mismatches, they need to know about that and potentially redesign their primers because these S gene dropouts will occur when the primer is no longer complimentary to the viral sequence through the mutations."

Hafer said this is why PCR tests look for different targets rather than one.

"If there is some new variant that emerges, you run the risk of losing that primer and then your test is no longer detecting things anymore," Hafer said, adding this isn't a unique situation to omicron. "It's been a concern throughout the pandemic," he noted.

In January 2021, the FDA warned that some authorized molecular tests were at risk of being negatively affected by future variants.

And while this isn't happening just yet, Hafer said that in the future, some companies may find that their tests fail to detect future variants.

"It's Darwinian evolution in action, so it's just a bad break and it's going to happen eventually if we all wait around long enough," Hafer said. "Companies need to be monitoring this so that they can react quickly if they see that something has changed, and this is not just for infectious disease — anybody who's doing molecular biology in the lab will have a horror story."

Read the latest news on COVID-19: