How omicron changes the calculus of risk on airplanes 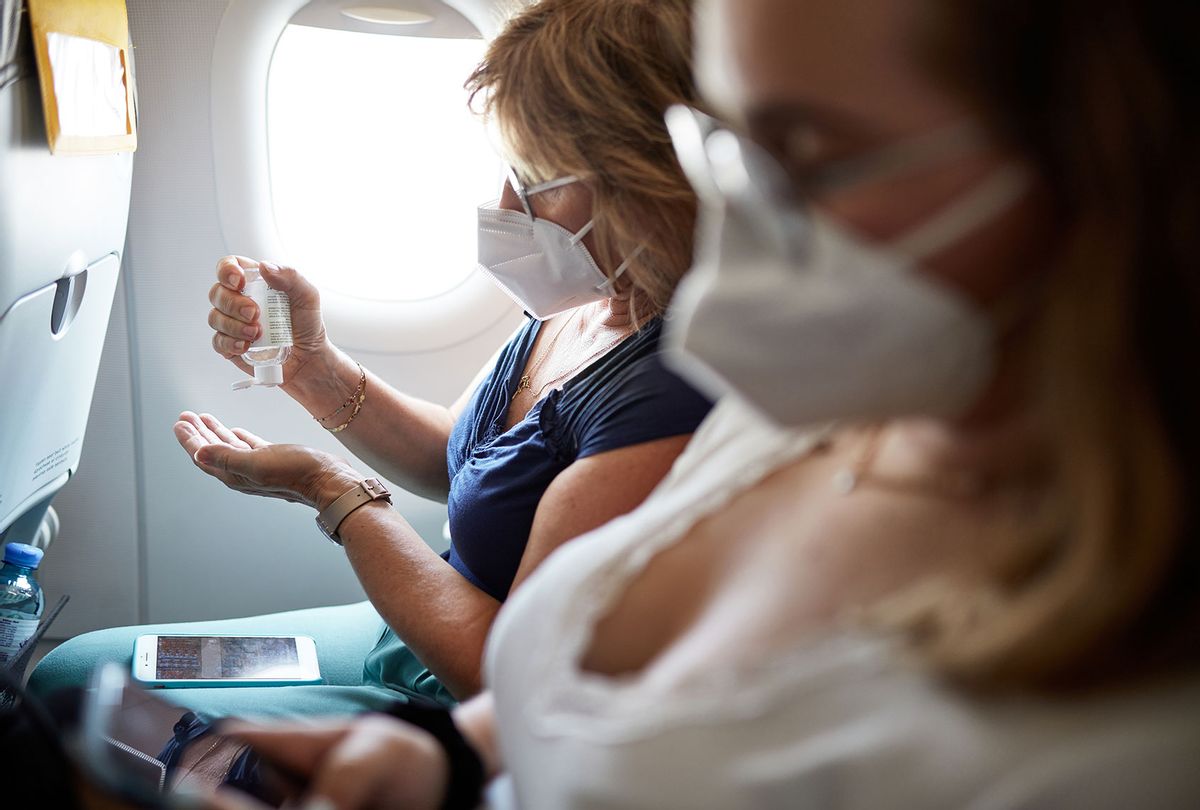 Side view with focus on background of woman in late 50s traveling with teenage daughter and squeezing sanitizer into her hand while flying in time of COVID-19. (Getty Images/xavierarnau)
--

Yet unlike previous variants, omicron has yet to bring in lockdowns in the United States or slow down travel. Indeed, air travel hasn't diminished the way it did at the start of the pandemic, and vast numbers of Americans are still traveling via airplane amid the surge.

Given the degree to which omicron is more contagious than earlier variants, that may not be a good thing. And some experts think flying on an airplanes has become a slightly riskier proposition in the age of omicron. As usual, risk is increased by compounding factors like age and pre-existing conditions, and mitigated by factors like booster shots and high-quality, well-sealed masks.

"We have evidence that you can get COVID-19 on an airplane," said John Volckens, an aerosol scientist and professor in the Colorado School of Public Health at Colorado State University. "Most of that evidence is from previous variants, but you can bet that if the alpha or delta variant can be spread on a plane, then so can omicron."

RELATED: The double-vaccinated are barely protected from omicron — but those with boosters are in good shape

Despite the airline industry's assurances that airplane travel is very safe, there have been studies on specific flights that affirm that COVID-19 can easily spread on airplanes, despite safety measures like masks and mandatory COVID-19 tests prior to takeoff.

Upon arrival at their destination's quarantine, three passengers tested positive for SARS-CoV-2. Twenty-four more people from the same flight tested positive over the course of the following 14 days. Notably, the researchers observed that passengers sitting within three rows of the first identified case had a higher infection rate. Those who were vaccinated were 74% less likely to be infected. Viral sequencing confirmed this specific outbreak was due to the delta variant.

But omicron is more infectious than delta, and more capable of evading vaccine-induced immunity — which inherently raises the risk of air travel.

"I think it's several times more risky, but it's still generally safe, and I think it all depends more on your own risk-benefit calculus," said Dr. Peter Chin-Hong, a professor of medicine and an infectious disease specialist at the University of California, San Francisco. "And the same rules apply, where the riskiest part of traveling is still not the airplane itself — it's the trip to the airport, it's the congregations in the food court."

Chin-Hong agreed that the risk of travel itself in an airplane is riskier now because omicron is more contagious.

"Omicron is thought to be, depending on what estimates you look at, five to 10 times more transmissible than delta, and the plane becomes that way too despite the ventilation," Chin-Hong said. "So I think it's a matter of putting an exclamation point next to the strategies you've used all along on planes."

William Schaffner, a professor of infectious diseases at the Vanderbilt University Medical Center, agreed that there's an increased risk with air travel due to omicron.

"Not only could it be more hazardous than delta or the other other variants, but it likely is because omicron is so much more contagious," Schaffner said. "But it's hard to demonstrate."

Indeed, there has been a wider general consensus that airplanes haven't been a main source of transmission. But that consensus came about in part because it's difficult for researchers to study and track outbreaks on planes, as Salon previously reported. Schaffner added there isn't much data about previous variants spreading on airplanes because the data is hard to collect.

"The first issue is that there are so many cases that case-finding studies and investigations are not done in the vast majority of cases," Schaffner said, explaining that "public health simply doesn't have the bandwidth, when there are thousands of cases going on, to interview every case to see where they may have acquired an infection."

Schaffner also noted that the airplane variable can be hard to separate from other transmission sources, as there are "so many other ways that people can get infected — in the airport, on the airplane, in the taxi, when they were with their relatives, when they went to the restaurant, when they did whatever they did before they got on the airplane."

Likewise, persons who are infected but without symptoms, or those with only mild symptoms, may be vectors of transmission yet never officially counted among the infected. In other words, it is difficult to pinpoint exactly where a person acquired an infection unless they were sitting next to someone sneezing and coughing on the plane.

Meanwhile, airline executives have touted the presence of hospital-grade air filters on modern airplanes. But do those reduce the risk of infection at all, as they claim?

Schaffner explained by analogizing pockets of air on a plane to slices of bread.

"Pretend the airplane is a loaf of bread with a series of slices," Schaffner began. "The air is handled slice by slice and, in other words, the people in first class are not exposed to the air of the people in the coach; so the air is circulated in a segmented fashion and it does go through very high efficiency filters," particularly in new aircraft. In other words, those at risk are those within a specific "slice" of air who may be near someone who is infected.

Schaffner emphasized previous instances of airplane transmission of disease, despite filtration. "Even in those circumstances in years past... there have been outbreaks of tuberculosis that have come from exposure on aircraft and the CDC has those data," he added. Schaffner said that those studies "quite clearly" show that a person is at a greatest risk of acquiring an infection from someone two rows behind them, or in your own row.

"And that speaks to the segmented way the air is handled on the aircraft," Schaffner said. "So even when those systems are in place, you can still get transmission of infectious agents on an aircraft."

However, Schaffner still believes that the riskiest part of travel is what happens after and before the flight — the gatherings and the people you see and so on.

All experts agreed that masking while flying greatly reduce one's risk. Almost all commercial flights still require travelers to be masked for the duration of the flight, with the exception of periods when they may be eating or drinking.

"Masking has been associated with dramatically lower infection risk on airplanes — a quality, well-fitting mask provides both control of the source (the infectious person) and protection for the wearer (the exposed person)," Volckens said.

But those who are unvaccinated or have a higher risk of having a severe outcome with an omicron infection might want to postpone their travel plans.

"An unvaccinated person, over the age of 65 person, or an immunocompromised person would be very, very at risk these days and it would probably be best to not travel or drive in their own car without anybody else," Chin-Hong said. "But somebody who's vaccinated and boosted, wears a good mask... I don't see any reason why you shouldn't take a plane.