The truth about Uvalde: Will this mass shooting wake Americans up to the need for police reform?

Police abuses are justified with claims that cops "protect" us — but, as Uvalde shows, they don't even do that 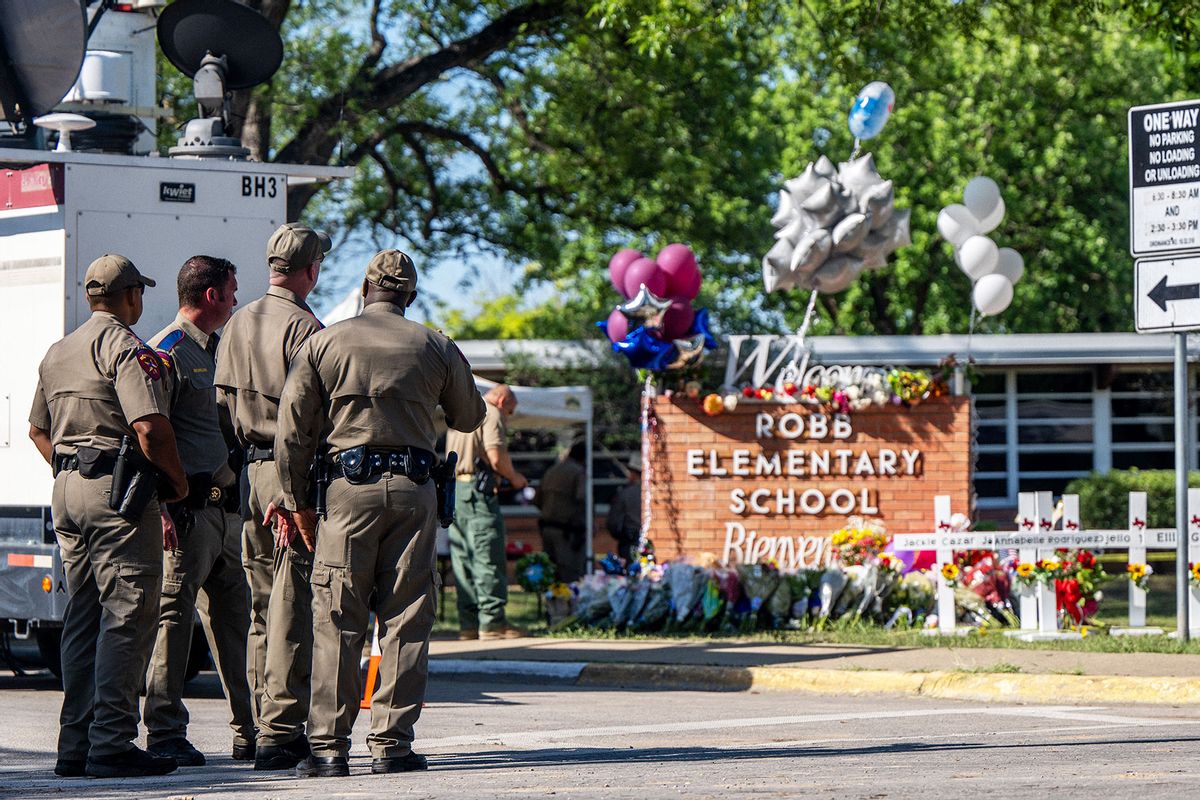 376. That is the number of cops who showed up at Robb Elementary School in Uvalde, Texas on May 24 and did nothing for over an hour while a school shooter murdered 19 children and two teachers.

That's a lot of cops, especially in a small town in Texas. That there were so many cops to begin with is a testament to the widespread belief that, in the name of public safety, we must spend handsomely on police forces, granting them enormous budgets that far outstrip spending on many other social services. Uvalde may be a sleepy small town, but by god, they were going to be flush with law enforcement, drowning in uniformed police who are armed to the teeth and equipped with expensive military-grade armor and other fancy goodies to keep the public safe.

That's what folks thought the cops were for: keeping them safe.

"They failed to prioritize saving the lives of innocent victims over their own safety."

But, as the events of May 24 demonstrated, whatever else we may be paying cops to do, "saving people from violent criminals" is more optional than required. It's secondary to more pressing cop concerns like posing for pictures showing off how tough you think you look.

Sunday, a committee for the Texas state legislature released a report detailing how, despite the minor army of cops right outside the door, the teen killer was allowed an uninterrupted murder spree for over an hour before some of the cops finally worked up the nerve to stop him. (As the Texas Tribune points out, the Alamo had fewer defenders when they held off Mexico's army for 13 days.) This report builds on weeks of reporting from other outlets showing that the police on the scene were far more interested in handcuffing parents who wanted to save the children than they were in confronting the shooter. Video footage released by the Austin-American Statesman last week shows the 77 minutes of cops "walking back and forth in the hallway" while "talking, making cellphone calls, sending texts and looking at floor plans," but not "entering or attempting to enter the classrooms." After all, arresting unarmed parents is safe and easy, but dealing with a maniac with an AR-15 is scary and hard. Eventually, a small group of Border Patrol agents decided to stop messing around and rescue the children.

"They failed to prioritize saving the lives of innocent victims over their own safety," the report reads.

It's worth remembering that this committee serves one of the most authoritarian state legislatures in the country. That even they were willing to admit this makes the police look bad speaks volumes. Despite these massive failures, one of the earliest responses to the shooting from local government officials after the shooting was to demand even more funding for police. But if 376 cops weren't enough to take out one killer, it's hard to imagine adding even more cops to the pile would do much good.

In recent years, there's been a lot of debate over police funding and accountability in response to high-profile police killings of civilians, especially the 2020 murder of George Floyd at the hands of Minneapolis police. Some activists made "defund the police" a slogan, arguing that the money spent on police would be better spent on social services that prevent crime instead.

The reaction to this slogan has ranged from dismissive to outraged — and not just with conservatives, either.

RELATED: Uvalde shooting timeline exposes an ugly truth: The police have no legal duty to protect you

As Pew Research found, support for police funding has stayed strong across demographic and political groups. A full 86% of white people want police funding to be increased or stay the same, but that's also true of 76% of Black Americans. Ninety-four percent of Republicans want police funding to stay the same or be increased, but the same can be said of 74% of Democrats. Right-wing media has, with great success, bamboozled much of the public into thinking Democrats want to "defund" the police, but in reality, Democratic politicians walk a wide berth around the subject.

"What are we paying them for then?"

The idea of policing stays popular, even as outrage over police abuses has grown. People want to be safe, and they believe the police are here to keep us safe. People aren't wrong to want there to be a taxpayer-funded system of public safety. Being the victim of a crime is an objectively terrible and often deadly matter. People are fully justified in desiring services that prevent crime. Indeed, activists for police reform find better audiences when they recast their arguments as crime prevention, with proposals to redirect some funding from police to mental health and other services.

But real discussion about police reform will always be stymied if most people believe the cops, as their badges claim, have a duty to serve and protect. People will always want someone they can call on for help, as well as to keep dangerous people off the street. As the January 6 insurrection shows, there's a lot of bad people out there who will only be checked by the threat of punishment. People have every right to want laws against violent crime to be enforced.

The problem, as the Uvalde shooting shows, is that police don't actually have a duty to protect you.

As I wrote about for Salon in the aftermath of the shooting, in 2005, the Supreme Court ruled that police are not actually required to stop criminals who intend to harm people. Police can and often do refuse to help people in need. Cops simply do not have a legal duty to do things like stop an active shooter. They can, and often do, hide behind the "not actually my problem" excuse when members of the public ask for protection.

If more people understood this reality, it could help dramatically change the contours of the public debate over police reform. Right now, the assumption is that there's tension between the desire to reduce police abuses and the need for police protection. But if more people understood that cops don't actually have to protect you, a lot more would ask, "What are we paying them for then?"

People aren't wrong to want a government-funded, easily accessed service that has a duty to protect ordinary people from crime. The problem is that we don't actually have such a thing. Police reform activists would do well to drive that point home: That police have a lot of power but little obligation to help people. The focus should be on replacing the current police forces with something better. Something that flips the current situation on its head, forcing police to do more to protect people, while checking the power they have to abuse people.

Perhaps watching a bunch of police let children die while they handcuff parents for defying their authority will be the wake-up call that the public needs. Police aren't the public servants that most people want them to be. Understanding that reality is the first step to changing it.