MAGA is complicit — not conned: Trump supporters were the most pivotal part of his coup

Trump is a "man, not an impressionable child" — but his followers aren't naive children, either 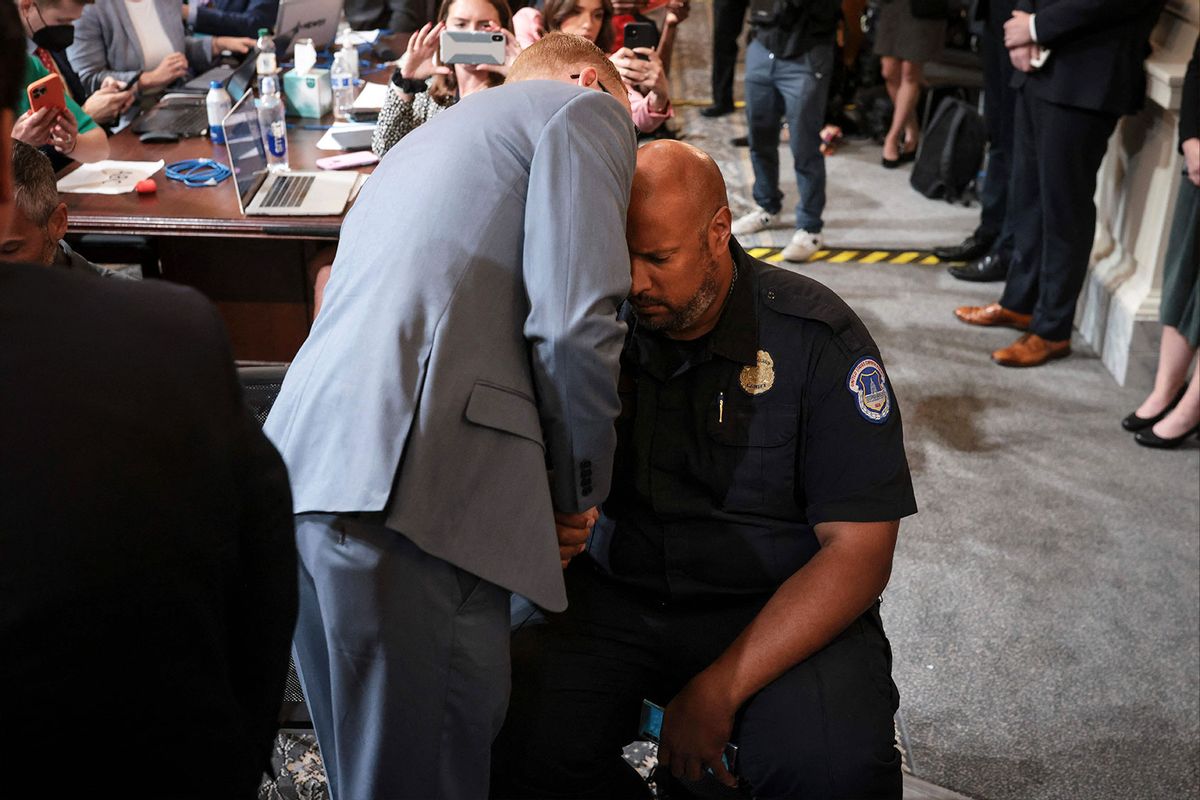 Stephen Ayres (L), who has pleaded guilty to entering the Capitol illegally on January 6, talks to US Capitol Police Officer Harry Dunn (R) at the conclusion of a full committee hearing on "the January 6th Investigation," on Capitol Hill on July 12, 2022, in Washington, DC. (OLIVER CONTRERAS/AFP via Getty Images)
--

Americans love a redemption story, especially one that reassures liberal America that right-wing jackasses just need a little education to see the light and renounce their bigoted pasts. Inevitably, then, there was widespread swooning in the denouement of Tuesday's hearing when Stephen Ayres, an insurrectionist who testified about his January 6 regrets, approached four police officers injured in the riot to apologize.

An "extraordinary moment," is how Jacqueline Alemany of the Washington Post described it. "Somewhere in here is our way out of this," comedian Chip Franklin tweeted. Former Democratic Senator from Missouri Claire McCaskill gushed that Ayres "had the class to apologize" and "the courage to come forward and admit he was duped."

The officers themselves, however, were much less impressed.

RELATED: January 6 hearing makes it clear: MAGA is a cult

"I got nothing," Dunn later told ABC News, noting that he does still "believe in forgiveness" over time.

As the discomfort with Ayres' testimony and apology demonstrates, the simplistic redemption narrative is a tough sell.

Metropolitan Police office Daniel Hodges did tell CNN's Jake Tapper that he accepted the apology, but with noticeable reluctance and only, he argued, for pragmatic reasons, "You have to be willing to forgive those people" when they apologize, he argued, "because if you de-incentivize the return to rationality, this culture war will never end."

As I noted in my analysis of Tuesday's hearing, there are good reasons the January 6 committee wishes to portray people like Ayres as victims who, to quote Rep. Liz Cheney, R-Wyo., "put their faith, their trust, in Donald Trump" only to be "deceived" by him. It's easier, both politically and legally, to hold Trump responsible if the people who did his bidding are cast as dupes in the thrall of a deceptive cult leader. Plus, as Hodges notes, there's less incentive for Trumpers to renounce their leader if they get shunned no matter what.

Still, as the discomfort with Ayres' testimony and apology demonstrates, the simplistic redemption narrative is a tough sell.

This is not the tragic story of the cult followers of Jim Jones or Keith Raniere, whose sympathetic desires for empowerment and community were used against them. People go MAGA because of their ugliest impulses. They follow Trump because he's a violent racist and a sexual predator, not despite those facts. Trump gives his followers permission to be their worst selves, and that's why they love him.

Much of Tuesday's hearing was focused on how Trump deliberately rejected factual information and surrounded himself with people like Rudy Giuliani, Mike Lindell, and Sidney Powell, all of whom would tell him whatever idiotic lies he wanted to hear. What was elided, however, was that Trump's followers like Ayres do exactly the same thing. No one is forcing them to turn away from fact-driven media so that they can wallow in disinformation on Fox News and Facebook. That is a choice they are making — for exactly the same reason Trump makes it: They prefer their toxic fantasies over the truth.

Reading the FBI arrest documents for Ayres strongly challenges the notion that he was an innocent dupe who was just working on bad information. Literally, within hours of the Capitol insurrection, Ayres was on Facebook generating disinformation of his own. In the video, Ayres and his friend try to pin the whole thing on "antifa," even though, as participants in the insurrection, they knew full well who was actually motivating the crowd.

People go MAGA because of their ugliest impulses

This video points to a hard but necessary truth to absorb about Trump supporters: They believe themselves to be in on the con. Trump does bamboozle them with lies, but not the ones that January 6 committee and the media focus on, such as the election lies. His real trick is convincing his supporters that they can get away with lying and cheating, just the way their beloved leader gets away with it.

Of course, as Ayre's arrest record shows, they can't.

As Tapper said in his CNN segment with the officers, Ayres "seems somewhat repentant today." There's been over 250 guilty pleas from insurrectionists already. Few express regret or anger at Trump. When they do, it's almost never about the deeply rooted reasons they were there that day. Mostly they seem mad that Trump led them to believe they'd get away with it. No doubt Ayres is the best the January 6 committee could get, in terms of open remorse, but even he seemed uninterested in talking about why, exactly, he started down the path of disinformation addiction.

As Cheney noted in her opening remarks Tuesday, Trump is an adult and "not an impressionable child," and therefore "he is responsible for his own actions and his own choices." The same is true of Trump's followers.

Yes, in a narrow sense, the people caught rioting at the Capitol are being held responsible. They are being charged with crimes and doing their time. But we are facing a larger, more existential question, when it comes to MAGA nation, about what it means to treat people like adults who are responsible for their own actions. Every person who votes for Trump — and wants to vote for him again — is complicit. Every person who chooses Fox News over reality-based media is complicit. Everyone who shares MAGA memes or spreads the Big Lie on social media is complicit. They are, like Trump, adults. And they are responsible.

Even the story of Jason Van Tatenhove, the former Oath Keeper who testified yesterday, doesn't really fit the mold of a MAGA-head who renounced his ugly views. On the contrary, he seems to have hit the eject button because he realized that he didn't share the core bigotries that motivated others in the organization. Without that, it was just harder to play into the lies. A love of disinformation is the peccadillo that springs from bigotry, not the other way around.

On Tuesday, Greg Sargent and Paul Waldman wrote a compelling Washington Post editorial pointing out that Republican leadership, not just Trump, fed "the belief among countless Americans that the election actually could be procedurally reversed." Even as they knew that the MAGA crowd was gathering in the Capitol, armed and with violent fantasies, Republican leaders continued to support Trump's election lies.

There's been over 250 guilty pleas from insurrectionists already. Few express regret or anger at Trump.

But while it is true that Republican leaders bear responsibility for stoking the lies, it is equally true that they did so because their base was demanding that their leaders lie to them. At Tuesday's hearing, the committee played a recording of Rep. Debbie Lesko, R-Ariz., complaining to GOP leaders that the Trump supporters "actually believe that we are going to overturn the election" and "when that doesn't happen," she worried "they're going to go nuts." She went on to vote to overturn the election anyway. It's repulsive, immoral behavior. It's also a reaction to the demands of the crowd. Lesko, like most of Trump's GOP supplicants, plays along with the lies because it pleases her base and benefits her politically. Republican politicians know that the price of telling their voters the truth is lost elections. So they give the people what they want: Lies.

There's a great deal of appeal to a story about how Trump supporters are unfortunate dupes misled by disinformation. That narrative offers the hope of a cure: If only they engage with facts instead of lies, they will get better and our country can return to normal. There's even some truth to it, as shown by a study in which Fox News viewers were paid to switch to CNN and, for that short period, became less delusional in their opinions.

But that study also showed a grim reality: As soon as they were no longer being paid, the study participants switched right back to Fox News and started getting stupider in their opinions as a result. It's not because they were unaware that CNN was an option. Being idiots who wallow in disinformation is an active choice being made by adults, not impressionable children. What Trump and Fox News have demonstrated in the past decade is that lying is profitable, because there's a huge audience who craves lies. As long as that remains true, it's hard to see what incentives GOP leaders and right-wing media have to tone down the lying.

But that doesn't mean the situation is hopeless. The real story from Ayres's testimony yesterday is not one of remorse, but of the power of consequences. There may not be much that can be done about people clinging to bigoted ideologies because it suits their egos to believe them. But they can be convinced not to break the law in order to achieve bigoted ends if there are legal consequences in doing so. This is why it's so crucial not to let Trump skate away from legal consequences for attempting a coup. The reason the insurrectionists rioted that day is because Trump led them to believe that they, like him, they could get away with committing crimes. He continues to dangle the promise of pardons to keep them on the hook. If he finally stopped getting away with crime, it might chill the faith his followers have that they, too, are immune from facing consequences.

RELATED: Was this finally enough? Trump and his terrorist confederates must be prosecuted