Reminder: Most mass shooters are male and it was a mostly male police force who failed to save the victims 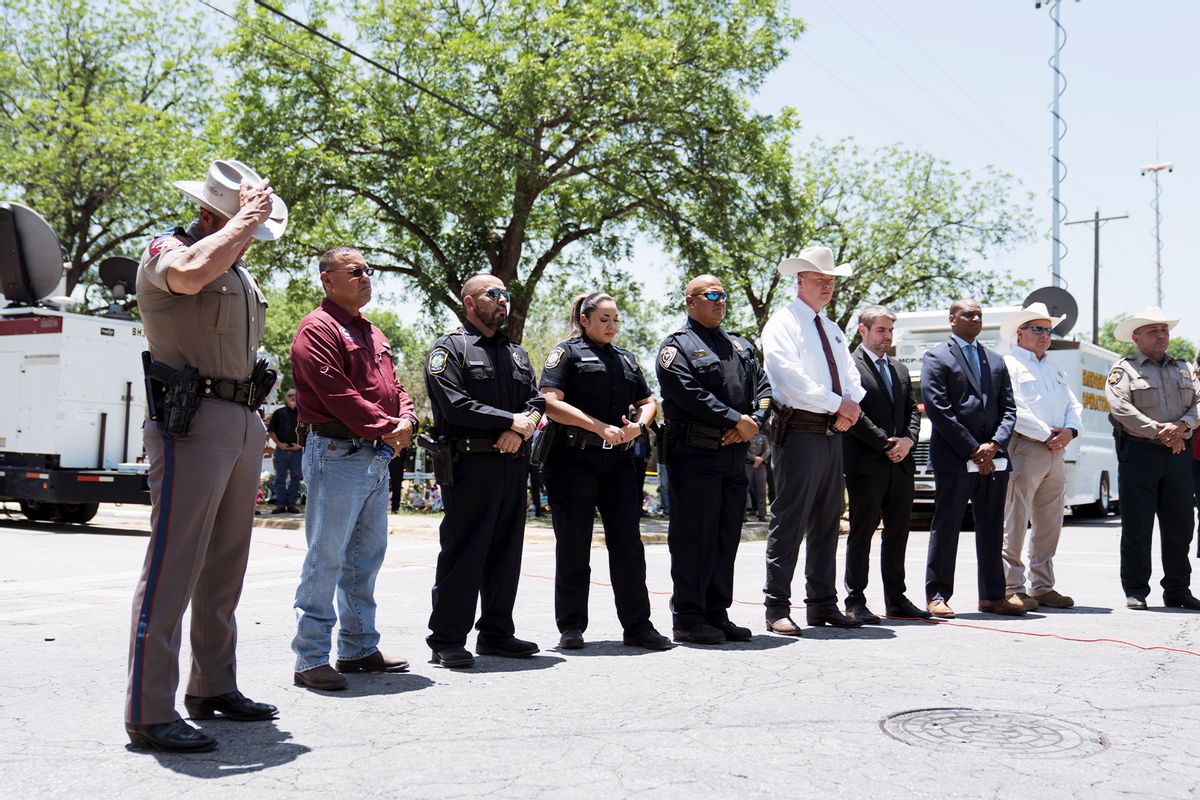 Law enforcement and other officials attend a press conference on May 26, 2022 in Uvalde, Texas. (Eric Thayer/Getty Images)
--

The self-exonerating stories from police after the mass shooting in an elementary school in Uvalde, Texas keep falling apart. The already long list of corrections to initial police reports now has another addition: exoneration for the teacher who police falsely implicated in the shooting by claiming she propped open a back door that the shooter used to get into the school. The Texas Department of Safety has since revealed that the teacher actually did shut the door, but that it simply didn't lock as it should.

The Uvalde police's story has changed so often that the journalists who keep track of the shifting narrative deserve hazard pay. It's gotten so bad that the Uvalde police have stopped cooperating with the state investigation into the failures that led to cops standing outside the classroom while children locked in with an active shooter kept calling 911 and begging for help. The false story of the careless teacher looks now like yet another attempt to deflect blame from the cops. Scapegoating a school teacher is a particularly low move considering that it appears that the two teachers who died that day were among the few adults who had the courage to attempt to protect the children.

Male cops blaming a female teacher for their own failures fits right into a larger pattern on the right: Pinning the blame for this massacre, and all others like it, on women.

RELATED: Uvalde shooting timeline exposes an ugly truth: The police have no legal duty to protect you

Before the bodies were even cold, in their effort to talk about anything but guns, Republican pundits and politicians zeroed right in on victim-blaming school staff for mass shootings. Most teachers are women, giving the Republican propaganda machine an opportunity to characterize schools as weak and feminine places supposedly in need of even more male protection. On Fox News, there was lots of chatter about schools being "soft" targets in need of "armed security agents" and other manly man figures to shield the women and children inside.

The underlying theory is that the "problem" is letting those college-educated women who teach school have too much control over what happens in classrooms.

It swiftly became clear, however, that the problem in Uvalde was not a lack of well-armed men who like to pose dramatically with guns. On the contrary, there was a robust police presence at the school, but those big tough manly cops were afraid to engage the gunman. Instead, they stood out of the classroom for an hour while kids begged for help. This did not deter right-wing media or Republican politicians from peddling a gendered narrative extolling masculinity and demonizing women, however. On the contrary, the misogynist narratives exploded rapidly.

On Fox News, Lara Trump blamed "fatherless children" for mass shootings. Jesse Watters echoed this claim, arguing that divorce "rates have skyrocketed." (In reality, divorce rates have been in decline since 1980.)Watters also said that "shooters didn't have a dad in their life." Fox News commentator Dan Bongino worked the same nonsense, claiming kids don't have fathers to teach "physicality doesn't always mean violence." It's probably not true, but definitely not in this case, as the father of the shooter has already publicly apologized. Despite the heavy use of the word "father," anyone who has even a cursory understanding of right-wing media knows this is a standard-issue woman-blaming narrative on the right. The idea is that feminism "ruined" women by making them too independent and giving them too-high standards, which supposedly runs off the men.

Alongside single mothers, teachers themselves, the majority of whom are women, were also blamed. Republican Sen. Ron Johnson of Wisconsin argued that "we stopped teaching values in so many of our schools" and "we're teaching wokeness." It's a narrative of racist paranoia, but also gendered paranoia. The underlying theory is that the "problem" is letting those college-educated women who teach school have too much control over what happens in classrooms. Right-wing podcaster Steven Crowder claimed "public schools are a breeding ground for evil," because of those majority-female teachers supposedly "browbeating young white boys." Glenn Beck rolled out the same talking points about "wokeness" in schools, taking a shot at trans students and staff by decrying "bathrooms that anybody can use."

Male cops blaming a female teacher for their own failures fits right into a larger pattern on the right.

It got even more explicit with Fox News guest Jason Whitlock arguing that school shootings happen because "masculinity, traditional male values, are under attack." On One America News, Oliver North blamed women for having abortions. (Note that the same conservatives who blame single mothers want to force more women to be single mothers.) And no matter how often it's debunked, Candace Owens of Daily Wire is determined to blame trans women for a cis man shooting up a school.

Needless to say, women are not the cause of either mass murder or widespread law enforcement failures.

The percentage of mass shooters who are female is vanishingly small. It is very much a crime of toxic masculinity, no matter how whiny conservatives get when this obvious fact is pointed out. And the law enforcement failures in Uvalde underscore how much the masculinist fantasy of the "good guy with a gun" is a flat-out lie.

What we have here is a classic example of the right's tendency to psychological projection. Mass shootings expose the deep problem of mindless cheerleading for "traditional" masculinity. The masculinist power fantasies that undergird our lax gun laws are fueling the violence. The same fantasies turn even uglier and more violent in the minds of the men who commit these crimes. Domestic or sexual violence is a common theme with shooters prior to their mass shootings. The Uvalde shooter is no exception. Our overpaid and ineffective police force is also the result of these silly masculinist power fantasies.

But rather than admit their conceptions of manhood are fueling this mass shooting problem, conservatives are projecting their own failures onto women. Many are even literally accusing a woman, falsely, for the shooting. Owens and other right-wing conspiracy theorists continued to pass around photos of a trans woman they falsely claim is the shooter. Conservatives would rather blame innocent women — a random trans woman, a teacher at the school, teachers in general — than admit that there's a problem with "traditional" conceptions of manhood.