Steve Bannon found guilty of contempt, faces up to 2 years after his defense strategy backfired 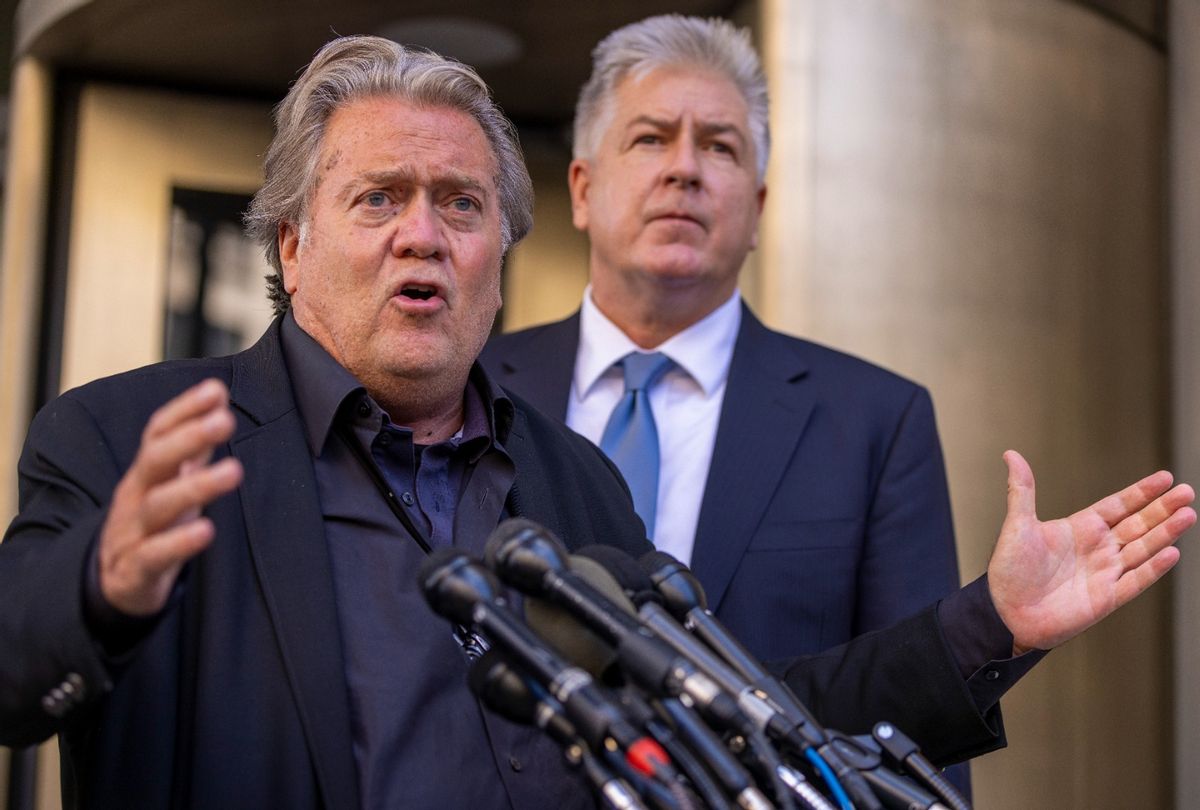 Former White House Chief Strategist Steve Bannon speaks to the media as his lawyer Matthew Evan Corcoran looks on after his trial for contempt of Congress began at the U.S. District Courthouse on July 19, 2022 in Washington, DC. (Tasos Katopodis/Getty Images)
--

Former Trump adviser Steve Bannon was found guilty of contempt of Congress after refusing to cooperate with the Jan. 6 committee's investigation.

Bannon faces a mandatory minimum of at least 30 days in jail but could face up to one year behind bars for each count. He could also be fined up to $100,000. His sentencing is scheduled for October 21.

Bannon is expected to appeal the verdict, according to NBC News.

Bannon played a key role ahead of the deadly Jan. 6 Capitol riot, participating in secret meetings with fellow Trump allies at the Willard Hotel and vowing ahead of the attack that "all hell is going to break loose."

"In short, Mr. Bannon appears to have played a multi-faceted role in the events of January 6th, and the American people are entitled to hear his first-hand testimony regarding his actions," the Jan. 6 committee said in a report.

Fellow former Trump adviser Peter Navarro, who played a key role in stoking Trump's Big Lie, also faces a contempt trial after he was indicted by a grand jury for failing to cooperate last month. He has pleaded not guilty.

"This case is not complicated, but it is important," Assistant U.S. Attorney Molly Gaston said in her closing arguments on Friday. "When it came down to it, he did not want to recognize Congress's authority or play by the government's rules."

Bannon, despite vowing to cause chaos in his trial, did not even mount a defense or take the stand as his lawyers argued there was reasonable doubt concerning his guilt.

"We didn't feel the need to put on a defense," Bannon attorney Evan Corcoran told the jury.

Bannon was indicted in November after the House voted to hold him in contempt for failing to cooperate with the Jan. 6 investigation. Bannon's attorney at the time argued that Trump had asserted executive privilege.

U.S. District Judge Carl Nichols rejected the argument that any assertion of executive privilege excused him from complying with a congressional subpoena.

Bannon's attorneys accused the judge of "handcuffing" their defense.

"He's wanted to testify publicly in this case under oath to tell the court, the jury and the public exactly what the true facts of the case are," David Schoen, another attorney for Bannon, told the court. "However, on the advice of counsel … he has decided not to testify, because he understands that he would be barred from telling the true facts explaining why he did what he did, and why he did not do what he did not do in relation to the committee's subpoena. He wanted to testify under oath to explain that at all times, he believed he was doing what the law required him to do, based on his lawyer's advice."

In closing arguments, Corcoran suggested that the dates on the subpoenas were merely "placeholders" and bizarrely questioned whether Bannon's subpoena was actually signed by Committee Chairman Bennie Thompson, D-Miss., raising questions whether his signature was real. He also raised "serious questions" about a witness' participation in a book club that also included Gaston, NBC News reported.

"The thing about bias is that sometimes people become blind to it," Corcoran argued.

"The only person who is making this case about politics is the defendant and he is doing it to distract and confuse you," Gaston said. "Don't let him."

Bannon days before the trial reversed his position and offered to testify before the committee, which prosecutors dismissed as a "last-ditch attempt to avoid accountability."

"That is like a child continuing to argue with their parent after they're told they're grounded," Assistant U.S. Attorney Amanda Vaughn said Friday. "That kid knows they're grounded, they can argue all they want, it doesn't change the fact that the decision has been made."

Gaston argued that the case was important because the investigation was focused on a major attack on the Capitol and how to prevent a similar incident in the future.

Prosecutors used Bannon's own words against him, citing his quote to the Daily Mail after he was hit with the subpoena.

"I stand with Trump and the Constitution," Bannon told the outlet.

"His belief that he had a good excuse not to comply does not matter," Gaston said. "The defendant chose allegiance to Donald Trump over compliance with the law."