Joe Biden is working remotely while he has COVID-19. Experts say you probably shouldn't do that

The president has advertised how he's hard at work while recovering from COVID; docs say that sets a bad precedent 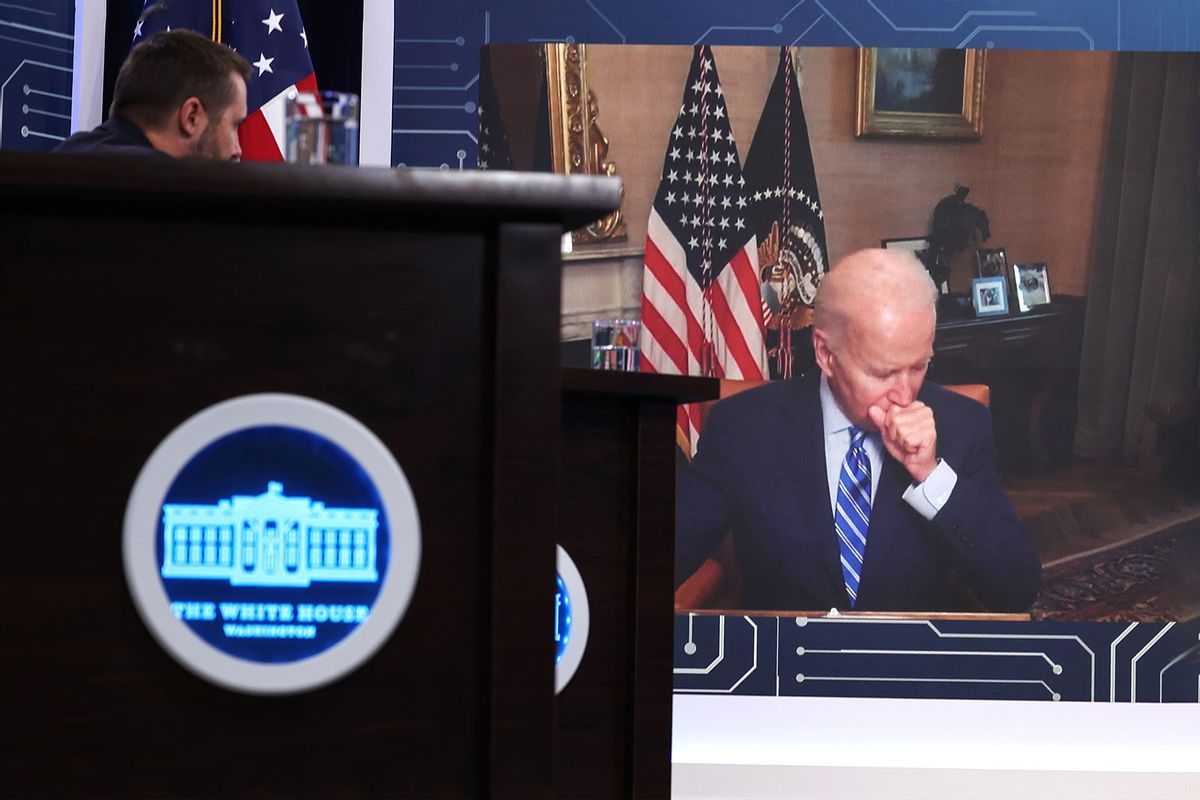 U.S. President Joe Biden covers his mouth as he coughs while remotely attending a meeting on the Creating Helpful Incentives to Produce Semiconductors (CHIPS) for America Act, in the South Court Auditorium at the White House on July 25, 2022 in Washington, DC. (Anna Moneymaker/Getty Images)
--

Last week, after news broke that President Joe Biden tested positive for COVID-19, the administration worked to play down the severity and risk to the septuagenarian commander-in-chief. After a status update from his staff that his symptoms were "mild" and improving with Paxlovid, another narrative around his update surfaced from the administration: Biden was still working, albeit remotely.

On Tuesday, at a press conference with reporters, press secretary Karine Jean-Pierre emphasized that he was working away while ill.

"As you've seen today, he's had another busy day of working," she said, adding that he resumed "his physical exercise regimen."

While Biden is vaccinated and boosted, he still is considered to be at high risk due to his age, 79.

What are the risks for COVID-positive Biden?

As the president of the United States, it is certainly hard to take a sick day. But the reassurance that Biden was still working remotely despite having COVID-19 may be setting a bad precedent for America, which already has a pervasive "work-while-you're-sick" culture, also known as presenteeism. Biden is not the only government official to encourage, if indirectly, this kind of behavior; when Chief Medical Officer Dr. Anthony Fauci tested positive for the coronavirus, his federal agency announced that he would "continue to work from his home."

For Carliss Chatman, as associate professor at the Washington and Lee University School of Law, the news of Biden working while he had COVID-19 became personal when she tested positive for the second time during the pandemic.

"No one said to me, 'You must teach these classes or you must get these edits in,' but I think there's this underlying pressure to be productive no matter what, and to work even when you're sick," Chatman told Salon. "And so if what we're doing with the president is saying, 'Look, he's 79, he's got COVID, he's coughing but he's got his suit on and he's working,' it just doesn't set the right example — we're not machines, we're people, and we should be able to not work when we're sick."

Still, Chatman has found herself working remotely for a second time with COVID-19.

"The first time I had COVID, I was very, very sick. I probably should have been in bed for two weeks, but I just got up, got dressed and did all my work online," Chatman said. "I didn't cancel a single meeting."

And Chatman is not alone in feeling the pressure to work through it. According to a survey by the Kaiser Family Foundation (KFF), one in ten workers surveyed said they physically went to work when they had COVID-19 symptoms or had been exposed to the virus; that number increased for low-income workers.

As more people get COVID-19 while working from home, it raises the question: even though you can technically work without the risk of infecting others, should you? From a recovery perspective, many physicians have recently said they don't believe it's a good idea.

"Sleep equals immunity," Dr. Susan Cheng, a cardiologist, researcher and professor in the Smidt Heart Institute at Cedars-Sinai Medical Center told the Los Angeles Times. "You want to have your immune system not distracted by anything else."

"Getting adequate sleep lets the immune system rebalance," McAuley said. "At a minimum, you really should unplug for three to five days."

"All your resources at that time are focused on bolstering your immune system responding to the virus," he said. "If you're focusing on other things mentally for work or trying to continue your workout regimen, it diverts a limited amount of resources your body has to those things instead of fighting the virus and recovering."

William Schaffner, a professor of infectious diseases at the Vanderbilt University Medical Center, told Salon one of the "striking features of BA.5 is that it induces a fair amount of fatigue." Yet in contrast with other experts, Schaffner said he though completely disengaging from work could cause undue stress.

"People have to adjust how much they can do when they are at home, but lots of people have been working with their computers and then taking naps," Schaffner said, adding people should "do whatever makes you feel good."

"It's psychologically very good for people to remain engaged, so they don't feel that they're falling behind and get stressed from that point of view," Schaffner said.

Of course, depending on a person's socioeconomic status and job, not everyone has that privilege to take a sick day, or to work remotely. According to the aforementioned KFF survey, only one-third (32%) of workers in households with incomes below $40,000 reported getting paid time off while having COVID; whereas over 50 percent of workers making over $40,000 received paid time off while being infected with the coronavirus, according to the survey.

"Engaging in presenteeism requires willpower, which depletes employees' psychological energy," Rivkin told Salon via email. "Organizations and leaders should emphasize that employees are not pressured to work if they experience health complaints."

In addition to having to work to not miss a paycheck, the societal pressure to work while you are sick is counterproductive and can lead to further adverse health effects. Before the pandemic, 90 percent of workers in a Robert Half survey admitted going to work while sick. The most common reasons included feeling like they have too much work to do, not wanting to use a sick day and facing pressure from their employer.

Wladislaw Rivkin, an associate professor in organizational behavior at Trinity College in Dublin, who has studied the effects of presenteeism, found in one study that working while you're sick with a headache or back pain can affect you mentally the next day.

"Accordingly, our findings show that engaging in presenteeism as a consequence of such complaints has negative consequences for people's effectiveness on the next day, as engaging in presenteeism requires willpower, which depletes employees' psychological energy," Rivkin told Salon via email. "Organizations and leaders should emphasize that employees are not pressured to work if they experience health complaints — by, for example, refraining from role modeling and thereby glorifying the act of presenteeism (i.e., going on Zoom calls with a running nose) but rather making it clear that people can also take time off without any repercussions."

Once the coronavirus took hold in the U.S., some wondered if presenteeism as a phenomenon was over, as the public grew more fearful of those with a cough or sniffle — something that was less true prior to the pandemic. But with the rise of remote work, Rivkin told Salon he doesn't think that presenteeism has improved or worsened in the pandemic, but instead the nature of it has changed.

"While someone who has to be physically present at work can only decide once (i.e., in the morning) whether they engage in presenteeism, a remote worker can change their decision multiple times throughout the day," Rivkin said. "For example, if I have a headache in the morning I can decide to stop working, but if the headache goes away by midday I can resume work."

Still, world leaders could set an example, Rivkin said — noting that it's worth considering that Biden may truly feel good enough to work.

"One may ask whether they actually engaged in presenteeism as it is defined as 'working while feeling unwell,'" Rivkin said. "I think this is what should be also emphasized when covering topics around presenteeism as it puts such behaviors as those of Joe Biden into context."