Other countries' health bureaus have advised the public to throat-swab when taking at-home tests, but not the US 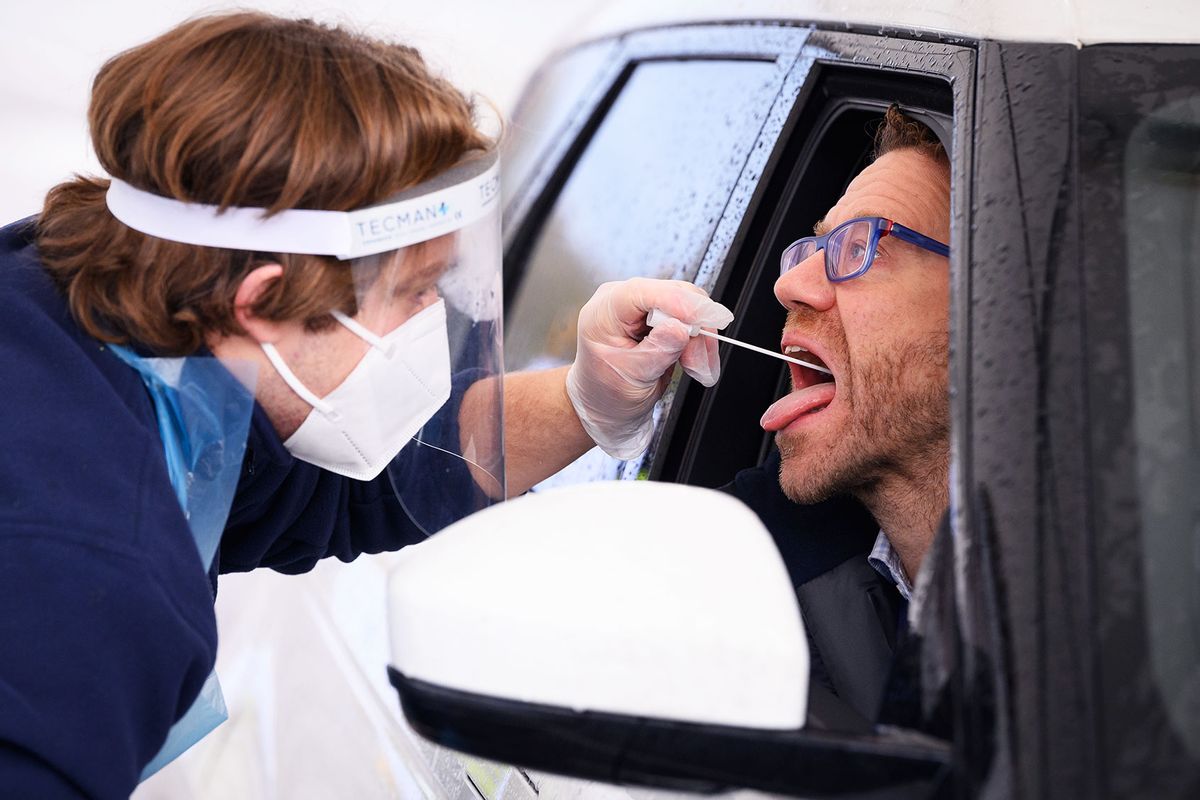 In January 2022, the U.S. Food and Drug Administration (FDA) cautioned the public against a peculiar method for testing oneself COVID-19 tests.

"FACT: When it comes to at-home rapid antigen #COVID19 tests, those swabs are for your nose and not your throat," the agency said Friday.

The anti-throat-swabbing warning came amid the first omicron surge in the United States. The reason? Anecdotal reports surfaced about people who were testing positive for COVID-19 only after they swabbed their throats. (A typical COVID-19 at-home test involves swabbing one's nose exclusively.)

Nearly seven months later, as the country faces yet another surge due to omicron subvariant BA.5, the FDA warning has yet to put an end to this off-label collection method. Anecdotal reports continue to surface on social media regarding symptomatic people who received negative results on an at-home test with nasal swabs, followed by a positive test only after they poked the back of their throat with the long swab instead.

Other countries' health agencies do call for testing one's throat for viral residue. Canadian provinces, including Ontario and Nova Scotia, have updated their recommendations for at-home testing to include swabs of both throat and nose.

"To collect a sample for a rapid antigen test (RATs), users should follow the instructions described in the kit insert," Ontario Health, a government health agency, advises in an information sheet updated in February 2022. "In addition to the collection method option approved by Health Canada (as described in the kit insert), users may choose to perform combined oral and nasal sampling as it may increase test sensitivity." The health agency proceeds to instruct people how to properly collect a sample from one's throat.

The collection method of throat swabbing remains a divisive issue among experts in infectious disease.

Despite the FDA's warning, many Americans are apt to wonder who to believe. Is this a collection method that does indeed "increase test sensitivity," as Ontario Health claims?

The answer depends on who's asked — as the collection method of throat swabbing remains a divisive issue among experts in infectious disease.

Nathaniel Hafer, an assistant professor in molecular medicine at University of Massachusetts' Chan Medical School who has researched both at-home antigen tests and polymerase chain reaction (PCR) tests, told Salon he believes it is best for people to follow the instructions of their specific test. In other words, if the test calls for throat swabbing, do it; if not, avoid it.

"I come down on the side that people should really do what's indicated in the test kit itself, which for all kits that are authorized in the U.S., the collection should be from the nose only," Hafer. "I think people should be following the instructions in the kits."

Yet Dr. Amesh Adalja, a senior scholar at the Johns Hopkins Center, disagreed. He told Salon via email he's been "recommending this for months" — as in, swabbing one's throat when using an at-home tests — "especially when sore throat is a prominent symptom."

As for lab-based PCR tests, Dr. Adalja said he doesn't recommend that physicians swab throats unless the instructions call for that method, which some do. For example, the Rheonix COVID-19 test does involve throat swabs. In other parts of the world, it is more common for PCR tests to be performed using throat swabs.

Going off-instructions could lead to some weird gray areas that raise new questions. For instance, say an individual swabs one's throat when doing an at-home test that doesn't call for throat swabbing — and then tests positive. Does that imply the result would be inaccurate?

Hafer said there is some "anecdotal evidence" that the location of the tropisms of SARS-CoV-2 have changed over time with different variants.

"People are speculating that there's just more virus in the throat. I mean, that might be true, but the kits have not been tested for that kind of collection method, and so people might be getting actually true results," Hafer said. "But when people don't use the kids according to the instructions, they're opening the door to not get accurate results— and that's both in the positive direction and the negative direction."

William Schaffner, a professor of infectious diseases at the Vanderbilt University Medical Center, told Salon he believes when a person swabs their throat with an at-home antigen test and they're positive, that means definitively that they are indeed positive — no question.

"They've been infected with the virus," Schaffner said. He noted that he thinks people should be following the test's instructions, but he's not surprised that people are swabbing their throats and getting positive test results.

"If you swab the throat, which is way in the back — and you can consider that the back of the nose also, we call that the nasopharynx, way back there in the throat — this is a virus that does cause sore throats, and indeed it gets down into your chest."

Indeed, as Schaffner pointed out, if the virus is lingering in the cavity where the nose and throat meet that is likely why positive results are appearing after throat swabs.

Notably, most of this advice is based anecdotal reports. There have not been any scientific papers with peer-reviewed evidence that confirm or deny the efficacy of throat swabbing with at-home tests that don't call for it. One study, published on medRxiv by researchers in Cape Town, South Africa, concluded that saliva swabs were the preferred sample-collection method for detecting omicron infections.

In the meantime, everyday people may take it upon themselves to swab their throats when self-testing. If that yields a positive result, it's time to contact a doctor and isolate from people.

In that scenario, "they should obviously contact their healthcare provider, particularly if they're in a high risk group," Schaffner said.