My research suggests that direct experience with extreme weather is changing Americans' views. But is it too late? 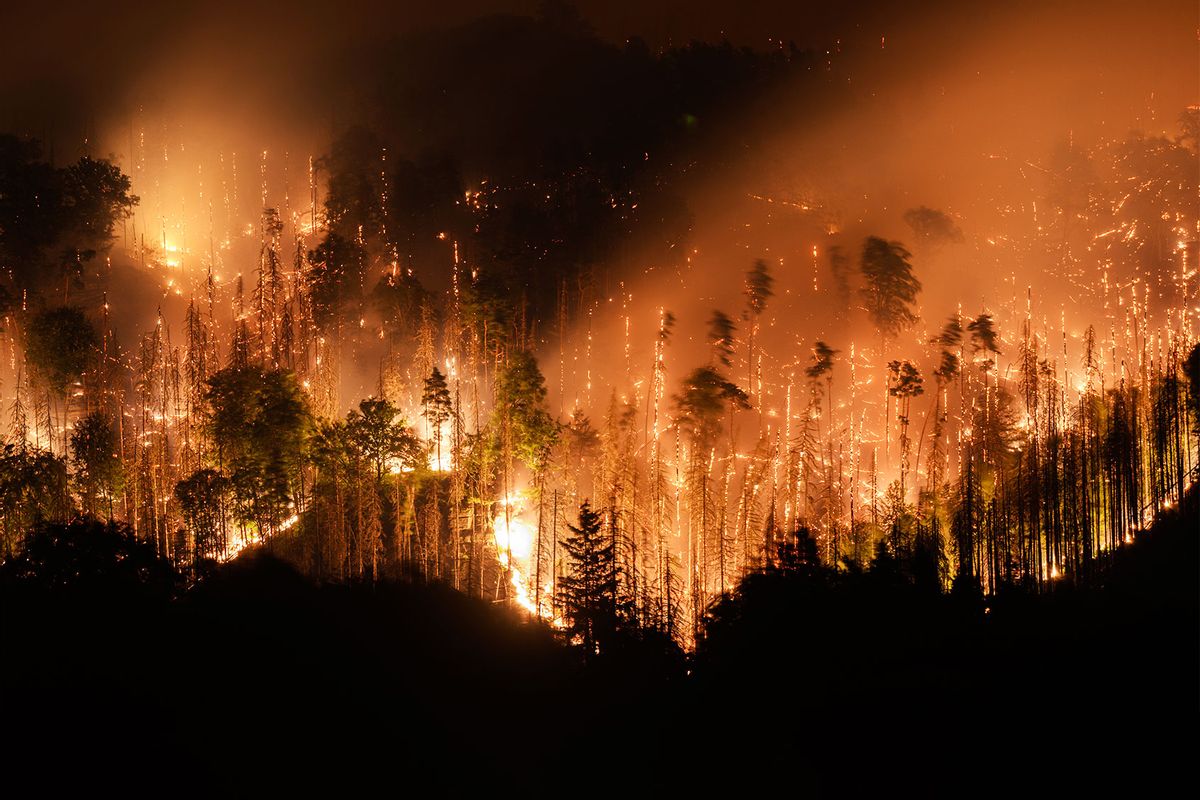 View of the forest fire in the Czech National Park Bohemian Switzerland in Hrensko near the border with Saxony, on 26 July 2022 (Robert Michael/picture alliance via Getty Images)
--

Record rainfall and flash flooding in the St. Louis metro area, with more than eight inches of rain in less than eight hours, breaking the previous record from more than a century ago. Another heatwave throughout the East, Midwest and Northwest, with more than 85 million Americans subject to extreme heat warnings from temperatures reaching 90° to 100° Fahrenheit for the greater part of a week. As Axios reports:

[T]he deadly heat wave set or tied 359 daily high-temperature records [in the U.S.] over the last week [of July], along with 709 records for the warmest overnight low temperature, according to NOAA's National Center for Environmental Information.

We can all see it: Extreme weather is the "new normal." The implications for humanity are anxiety-inducing, bordering on apocalyptic, with climatologists warning about the imminent harm from more frequent droughts, rising sea levels, extreme heat, intensifying wildfires and the rise of mega-storms and increasingly severe flooding.

Dawn of the apocalypse: Existential crisis for our species is right here, right now

For those who have been paying attention, the link between increasingly angry weather and a warming planet is no surprise. Climate scientists have a name for this: "attribution science." In other words, one can reasonably expect that increasingly extreme weather events become statistically more likely with a warming planet.

The link between extreme weather and climate change is especially frightening in light of our society's near-complete failure to address this crisis. Some of the polling numbers on the climate crisis are encouraging, while others are alarming. On the general "problem definition" level, people seem to get it. For example, Pew Research Center polling from early 2022 reveals that three-quarters of Americans think the U.S. should participate in global efforts to combat climate change. The survey finds that nearly 7 in 10 Americans (69 percent) favor efforts to "prioritize developing alternative energy, such as wind and solar," and the same number support the U.S. "taking steps to be carbon neutral by 2050."

On the other hand, other surveys demonstrate that Americans don't prioritize climate action, and are reluctant to embrace the kinds of change needed to address the crisis. Gallup polling from this year finds the public is almost evenly split between prioritizing energy production (46 percent) and environmental protection (50 percent). Only about half of Americans are willing to pay more for their energy consumption to combat climate change. And as Gallup surveys reveal, only a tiny proportion of Americans — 2 percent — list environmental concerns such as pollution or climate change as the nation's most important problem, with much larger numbers — more than a third — citing economic concerns such as the cost of living, inflation and energy prices.

To make matters worse, neither of our political parties has demonstrated a serious commitment to dealing with the climate crisis, and one of them has actively sought to avoid the issue altogether, or to deny it even exists The Democratic Party often pays lip service to the importance of climate, with the Biden administration making various failed proposals to move the U.S. toward greater reliance on renewable energy and less on fossil fuels. These modest efforts go nowhere because of obstructionists within the party who have consistently blocked serious action, most notably Sens. Joe Manchin and Kyrsten Sinema. On the other side of the aisle, Republicans effectively act as flat-earth denialists, often rejecting the science of climate change and almost unanimously embracing policies that will intensify the crisis by increasing our reliance on fossil fuels.

Considering that both political parties have systematically failed to address the crisis, the question remains: What will it take for Americans to take this threat seriously? There may be a simple answer.

Considering that systemic political failure to address this crisis, the question remains: What will it take before Americans take the threat more seriously? It appears there is a simple answer, made especially vivid by this summer's headlines: a growing number of people directly experiencing extreme weather. In 2019, an Associated Press-NORC poll revealed that half of Americans agreed that "weather-related disasters" were becoming "more severe mainly because of climate change," as opposed to being a function of "natural year-to-year variations in weather." By 2021, a Quinnipiac poll found that 61 percent of Americans believed "extreme weather events in the United States over the past few years" were "related to climate change."

Another 2021 poll from National Geographic and Morning Consult found almost half of Americans felt that "extreme weather and related events" such as rising sea levels, droughts, hurricanes and wildfires were impacting their "views[s] on climate change," and Pew polling from 2020 found that 62 percent said "global climate change" was "affecting" their "local community" in various ways. Among the nearly two-thirds of the public who shared this concern, Pew found that significant majorities said the effects of climate change included "long periods of unusually hot weather" (79 percent), "droughts or water shortages" (64 percent), "severe weather, like floods or intense storms" (70 percent), "damage to forests and plant life" (67 percent), "more frequent wildfires (54 percent) and "rising sea levels that erode beaches and shore lines" (56 percent).

Although personal experiences with extreme weather are clearly sensitizing the public to the danger of climate change, it isn't immediately clear from the above surveys whether these experiences are encouraging rising support for political action. To address this question, I draw on polling from the Pew Research Center, specifically its April 2020 survey on extreme weather and political attitudes related to climate change. I utilize statistical regression analysis to measure whether experiences with extreme weather are positively associated with heightened support for political action on the environmental front. I look at Pew's question: "How much, if at all, do you think global climate change is currently affecting your local community?" to see how it may be impacting attitudes about government climate action. Statistically accounting for other factors such as respondents' party identification (Democratic, independent and Republican), self-described ideology (liberal, moderate and conservative), age, education level, race, income and gender, I find consistent links between experiences with extreme weather and support for action.

Those who experience extreme weather events in their community are significantly more likely (88 percent) to agree that "the federal government" is doing "too little" to "reduce the effects of global climate change," in contrast to those who have not experienced such weather, just 29 percent of whom share that view. Furthermore, experiences with extreme weather in one's community are also significantly associated with a variety of policy preferences, including:

As I read these findings, they seem as encouraging as they are terrifying. The proverb that necessity is the mother of invention seems highly appropriate in providing a glimpse of how we may begin to address the climate crisis moving forward. As extreme weather intensifies, affecting more and more people in unexpected and sometimes tragic ways, we will only see demands for action grow. But this path is fraught with peril. Will there be enough pressure on governments across the world to act in the near future? And even if there is, will government actions be enough to mitigate the worst impacts of a rapidly warming planet? To use the metaphor of Russian roulette seems particularly apt, considering both the stakes and the monumental risks of waiting too long to mount an effective campaign to limit the damage.

Still, my survey findings should provide environmental activists some encouragement. They suggest that the public is increasingly waking up to the severity of the threat at hand. People's real-life experiences with extreme weather are acting as a catalyst driving support for reducing CO² emissions, and will likely fuel rising support for action in the future as the climate crisis worsens. Whether we act in time for this change in public attitudes to matter is up to us.

about the extreme summer of '22