Europe is experiencing unprecedented wildfires that are without question worsened by climate change, experts say 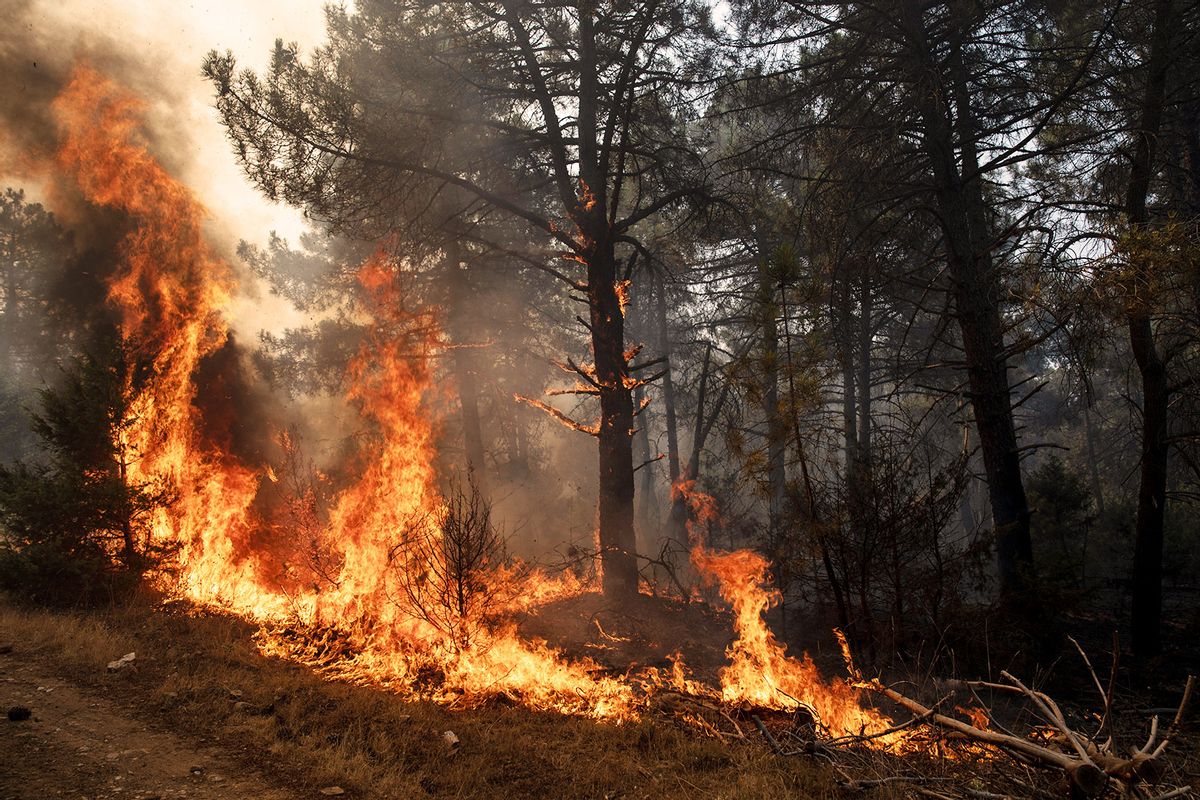 A flame burns a tree during a forest fire in Cebreros on July 18, 2022 in Avila, Spain. Wildfires have broken out across Spain and southern Europe amid a severe heatwave. (Pablo Blazquez Dominguez/Getty Images)
--

As the weather in the United Kingdom exceeds 40 degrees Celsius for the first time in history (that's more than 104 degree Fahrenheit to Americans), heat-related deaths have topped 1,100 in Spain and Portugal as wildfires blaze through the Iberian peninsula. The blazes have even reached France, where 14,000 people were evacuated from the city of Bordeaux as two pine forests have been burning up for almost a week. Sporadic wildfires been burning in Greece as well, buoyed by strong winds.

The catastrophic heats and fires prompted Spanish Prime Minister Pedro Sánchez to comment that "climate change kills." His sentiment is not hyperbolic; climate scientists tend to agree with the prime minister's sentiment, that the heat wave and wildfires battering Europe are connected to the climate crisis.

"Indeed, climate change kills, and in many ways," Wehner told Salon. "I personally know six families who have lost their homes in California fires since 2018. And one family lost their elderly mother who could not escape fast enough."

Michael Wehner is a senior scientist in the Computational Research Division at the Lawrence Berkeley National Laboratory, who specializes in climate change data. Speaking with Salon by email, not only did Wehner agree that climate change has exacerbated the ongoing European wildfires, but also said that the issue of wildfires strikes very close to home for him.

"Indeed, climate change kills, and in many ways," Wehner told Salon. "I personally know six families who have lost their homes in California fires since 2018. And one family lost their elderly mother who could not escape fast enough."

RELATED: Wildfire smoke is here to stay. Here's how to clean the air inside your home

The historic nature of the wildfires in the southern part of Europe perhaps explains the concomitant historic heat wave in the United Kingdom. There is one variable that undeniably links the two events: Man-made climate change.

"Undoubtedly climate change has played a substantial role in the wildfires in Portugal, Spain and France, as well as elsewhere," Kevin Trenberth, a distinguished senior scientist in the Climate Analysis Section at the National Center for Atmospheric Research, told Salon by email. "With increased carbon dioxide in the atmosphere there is increased heating, which first goes to drying and then to temperature increases. The warmer air also sucks moisture out of the plants."

"Climate change has made the planet hotter and drier," Mann told Salon by email. "A combination the leads to more widespread, destructive and deadly wildfires. Our own research suggests that human-caused warming has also altered by jet stream in a way that leads to more frequent persistent summer weather extremes like the ones we're seeing play out in Europe at this very moment."

While Mann did not comment specifically on how any of the European governments are reacting to climate change, he noted that "a lot of heads of state have given little more than lip service to climate action. It's time they recognize climate change as the defining crisis of our time and step up so that their actions match their rhetoric."

Without question, however, Wehner concurred with other experts that climate change is making wildfires more likely.

RELATED: Why fighting fire with fire might actually save Yosemite's giant sequoias

As climate change has worsened, wildfires have increasingly set dismal records. In 2019 and 2020, Australian wildfires were so massive that they punched a hole in the ozone layer. The following year, an Oregon wildfire was so intense that it literally created its own weather system. Experts agree that, as climate change worsens, wildfires are going to become more frequent and more destructive.

For more Salon articles about wildfires: