Why fighting fire with fire might actually save Yosemite's giant sequoias

Though it seems counterintuitive, the tactic may yet save a famous sequoia grove in Yosemite National Park 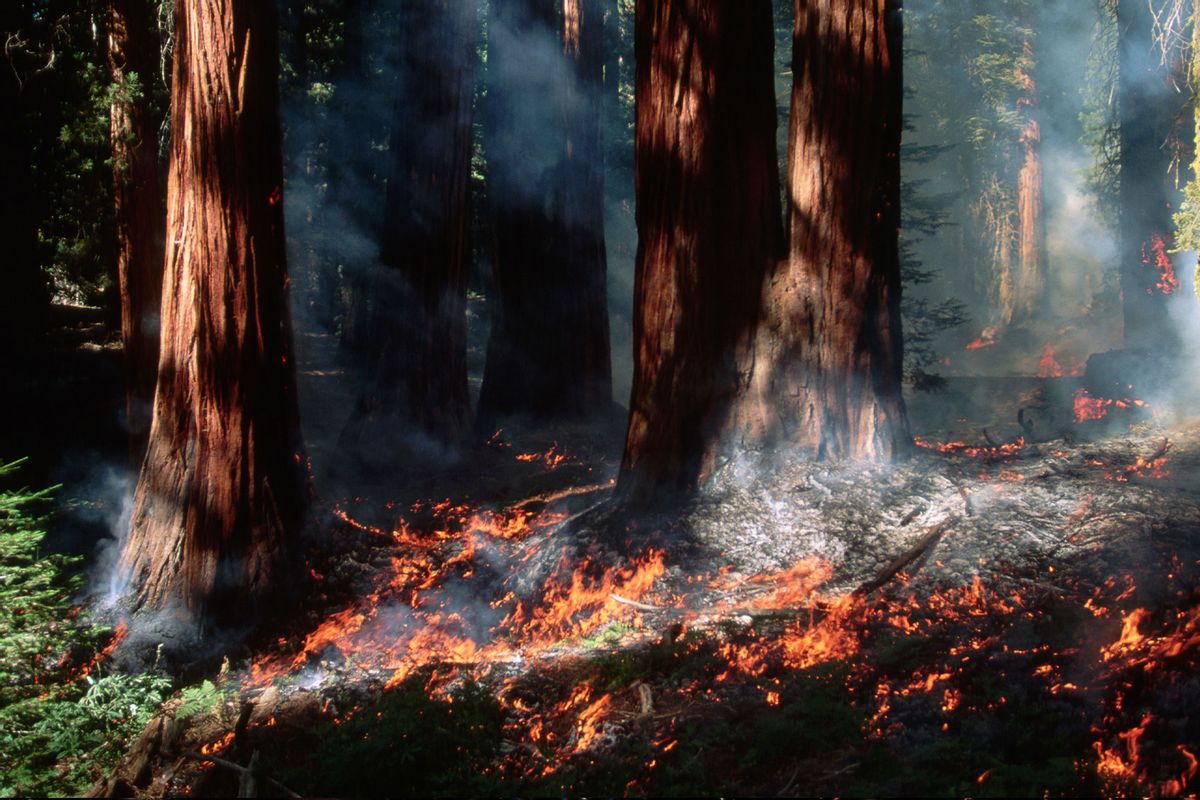 The controlled burn at the General Sherman tree landmark removes white firs and decayed matter from the forest floor, while not harming the sequoias. (Getty Images/Raymond Gehman)
--

Yosemite National Park's iconic giant sequoia trees — a symbol of conservation and a major tourist attraction in the Golden State — went up in flames on Thursday, July 7. First responders are fighting fire with fire to protect Mariposa Grove, a grove of giant sequoia trees by the south entrance of the national park. All 500 or so mature giant sequoias in Mariposa Grove, including the park's second tallest and most photographed tree, the Grizzly Giant, still stand — but the Washburn Fire is spreading.

Giant Sequoias thrive in Southern California, where wildfires, too, are a natural part of the forest ecosystem. Yet droughts over the last two decades turned forests in the Sierra Nevada into one giant tinderbox. High temperatures, degraded ecosystem health, and bark beetle infestations have killed millions of trees in Yosemite alone. Now, experts say the dry debris could provide fuel for Washburn Fire to climb from the forest floor into the canopy, creating a "crown" fire hot enough to kill the giant sequoia trees, which can live to be as old as 3,500 years.

Yosemite Fire dispatched a full initial attack team when reports of smoke came in on the afternoon of July 7, but one helicopter dropping fire retardant and a fire engine dousing the flames were not enough to quell the Washburn Fire as it grew from half an acre to over 100 acres. Yosemite Fire put in the call for reinforcements a few hours later. Arriving early Saturday morning, California Interagency Incident Management Team 13 assumed command. Yet with no shortage of dry fuel in Yosemite, spot fires spread Washburn Fire to just over 4,900 acres as of Monday, July 18 — but a prescription for fire kept a larger crown fire at bay. A total of 1,534 firefighting personnel have arrived on the scene in Southern Yosemite over the last two weeks, achieving 50% containment.

Fire crews tackled the fire by turning the ground black with char before the wildfire ever could. By pouring a mix of gasoline and diesel from metal canisters, called drip torches, firefighters lit small blazes called back burns — offensive fires intended to burn up the brush and other flammable debris before the wildfire can.

Indeed, fighting fire isn't just about "attacking" the flames directly. Rather than fighting the fire itself, back burning — also known as backfiring or burnout — attacks potential fuel to extend an existing barrier, whether natural or man-made, or create an entirely new one. The strategy is just one tool in an arsenal that firefighters have developed to combat large wildfires, and fire management teams have thrown every tool at their disposal at the Washburn Fire.

Yosemite firefighters shared a video on Instagram of the devastation.

"We're attacking it in every possible way: a lot of aircraft, a lot of hand lines, a lot of back burning," Yosemite National Park Superintendent Cicely Muldoonas told residents at a meeting on July 11. "The only benefit of having this fire so early in the season is there aren't a lot of other fires going, so there's a lot of resources available."

As Washburn Fire moved towards the community of Wawona last week, a specialized group of firefighters, referred to as hotshots, worked to clear hazardous downed trees and other debris. Other firefighting personnel dug trenches with bulldozers and dropped fire retardants from helicopters. Extending existing fire lines from the Merced River and Wawona Road to the north and the southeast, they worked to redirect Washburn Fire away from human infrastructure.

Because Washburn Fire was already burning in Mariposa Grove, firefighters had to work quickly with a smaller arsenal to stop the fire from advancing. Even at the edge of Mariposa Grove, trenches or fire retardants would have been damaging to the giant sequoias. Firefighters instead engaged in a risky maneuver, burning a controlled fire up to the edge of the wildfire, consuming readily available fuel before the fire could.

Officials have yet to determine the exact cause of the Washburn Fire. Muldoonas indicated that human ignition caused the blaze. Last month, high temperatures led to astonishingly dry conditions in Yosemite — but lightning, the only natural cause of wildfires, was absent from the park when the Washburn Fire ignited.

Conditions can change rapidly, and back burns sometimes backfire and result in new fires that spread out of control. Weather reports currently indicate that high heat will persist for the foreseeable future, making fires burn hotter and spread faster. If the fire were to crown, reaching the tops of trees, it would become uncontainable. Though sequoias are fire-adapted trees, a hot enough blaze could still decimate them.

Wildfire is not only a part of life for giant sequoias but essential to their reproduction. Their cones, through which they sprout new trees, only open with intense heat. It's not an accident; it's evolution.

Prescription burns are not a new means of fighting wildfires. Indigenous peoples used them long before European settlers ever arrived. According to Diane M. Smith, a historian of American wildfires, protectionist values did not become cemented until the foundation of the United States Forest Service in 1915.

"From its earliest days, the Forest Service pursued a single-minded goal regarding fire: minimize the size and number of wildland fires, if not eliminate them all together," Smith wrote. "This mission often came into direct conflict with the very nature of forests themselves."

Wildfire is not only a part of life for giant sequoias but essential to their reproduction. Their cones, through which they sprout new trees, only open with intense heat. It's not an accident; it's evolution. Fires restore nutrients to the soil and remove competition, creating the perfect opportunity to sow seeds.

Giant sequoias have a built-in fire-resistant shield: some two feet of bark, which protects them from low-intensity burns. For millennia, these giant sequoia trees have survived wildfires on the western slopes of the Sierra Nevada. Yet since 2015, intense wildfires have leveled a heavy blow to many populations that bark beetles have already weakened. Full suppression was the only option, according to Incident Commander Josh Boehm. Only around 40 such clusters of giant sequoias, the largest tree species in the world, remain in the world.

The "managed fire" tactic of fighting wildfires with fire only returned to the National Park system in 1970. While a common practice, the somewhat controversial approach to fire management comes with risks. Prescription burns typically take years to plan. Fighting fire with fire is unpredictable, but few other tactics reliably stop a fire in its tracks so readily, reported Fire Insider. When heat subsides in the evening the risk of the fire getting out of control is less severe, and controlled burns can be managed relatively well.

Fighting wildfires with fire is a relatively new tactic; historically, in the United States, parks systems and forestry managers tried to aim for wildfire suppression at all costs, an attitude that persisted well into the 20th century. The goal for complete wildfire suppression was originally to preserve timber as a natural resource. The logic was not exactly sound. Smith notes that healthy forests with ancient tree stands were the result of intentionally burned woodlands. Some trees, like the world-renowned Grizzly Giant in Mariposa Grove, are well over 2,000 years old.

"We're trying to give it some preventative first aid, really," said Garrett Dickman, Yosemite botanist, from the base of Grizzly Giant, the most famous giant sequoia in Yosemite, where a sprinkler system is rigged to douse the bark to keep it from igniting. "That is to cool flames and to increase the relative humidity and decrease the fire behavior around this tree."

Thus far the 209-foot-tall behemoth has not succumbed to the flames. Nor have any other giant sequoias in Mariposa Grove, which Muldoonas called "the root of the whole national park system." The fame of Mariposa Grove predates that of Yosemite itself and the National Park Service writ large. Indeed, President Abraham Lincoln ceded control of Mariposa Grove to California in 1864, making it one of the first state parks and the poster child of preservation.

on wildfires in California