Climate change is bound to increase the frequency and severity of such floods in the future, experts say 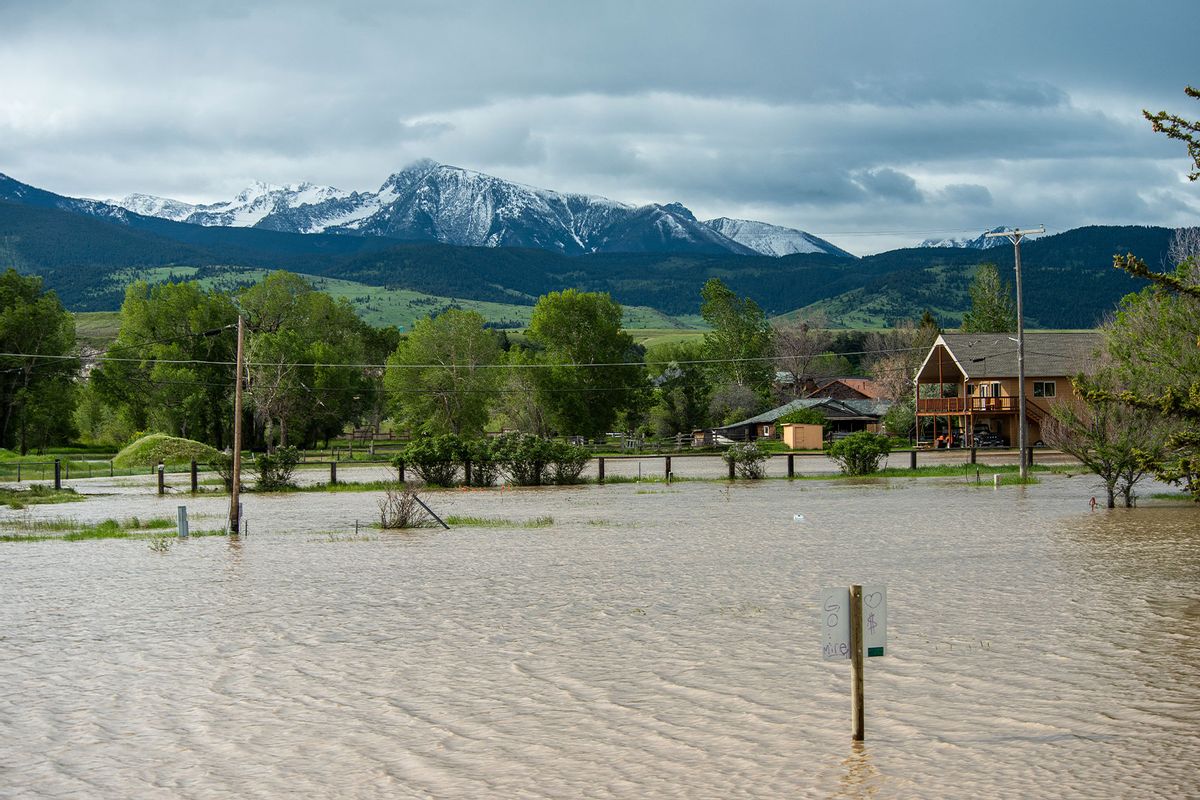 Flooding is seen on June 14, 2022 in Livingston, Montana. The Yellowstone River hit has a historic high flow from rain and snow melt from the mountains in and around Yellowstone National Park. (William Campbell/Getty Images)
--

Last year scientists found that climate change is melting the snow atop the majestic mountains in Yellowstone National Park and its neighbor, Grand Teton. This was not the first dire update involving climate change destroying iconic natural landmarks — among other things, the same year brought the news that Africa will lose all three of its glaciers — but it touched a special nerve because Yellowstone is so important to Americans. It is perhaps the nation's most famous national park; and it is, without question, one of the most beautiful, especially as it enters its 150th anniversary.

Yet since the start of the week, Yellowstone has been ravaged by historic flooding caused by record rainfall and snowmelt. Park officials on Tuesday night announced that the northern portion of the park, which has been most affected by the flooding, will have to stay closed for months. While there have been no confirmed deaths or injuries as of Tuesday night, there has been severe damage to the region's infrastructure, and all five entrances to the park have been closed. More than 10,000 visitors had to be evacuated and 87 so far have needed to be rescued. With roads flooded and power down, thousands of people in adjacent communities in southern Montana have been left effectively stranded.

RELATED: We now know how badly our cities will be flooded due to climate change

"Although I am not aware of any rapid attribution studies, it is highly likely that there is a human influence on this flooding due to global warming," Michael Wehner, a senior scientist in the Computational Research Division at the Lawrence Berkeley National Laboratory who extensively studies climate change data, told Salon by email. He noted that climate change increases extreme precipitation because warmer air holds more water vapor, and the Yellowstone floods appear to have been a rain-on-snow event, although he added that "it is difficult to put a number on either of these two effects without a detailed attribution study."

"Every flooding event is unique and it can be difficult to relate trends in flooding to trends in extreme precipitation," Wehner pointed out, citing as one example how some rivers have been engineered to control floods while others have not. "That being said, it is clear to me that the '100 year flood maps' based on historical data and often used for insurance mandates are generally out of date if they do not take climate change into account."

Dr. Karen Ryberg, a research statistician for the Dakota Water Science Center at the United States Geological Survey (USGS), explained to Salon in writing that the agency has been monitoring Yellowstone River flooding in Corwin Springs, Montana since 1911 and has historical flood documentation going back to the 1890s.

"Those data shows that the previous highest peak streamflow at the Corwin Springs streamgage was 32,200 cubic feet per second in 1996 and 1997," Ryberg explained. "The continuously monitored streamgage data shows an unofficial peak of 49,400 the afternoon of June 13th." (Ryberg emphasized that "this estimate is considered preliminary until USGS review and approval of the record post flooding.") It is normal for the Yellowstone River to flood in May and June due to snowpack runoff, Ryberg added, telling Salon that "the current flooding is cause by rain-on-snow, heavy rain while the snowpack had yet to fully melt. Such rain on snow events are not a new phenomena," but "higher elevations such as the High Sierra and northern Rocky Mountains are predicted to see increased ROS [rain on snow] events."

"It is clear to me that the '100 year flood maps' based on historical data and often used for insurance mandates are generally out of date if they do not take climate change into account."

In general, as Ryberg put it, "rain-on-snow events are generally climate (cold enough to still get substantial snowpack) and elevation dependent." That is why rain on snow events are expected to diminish in frequency and severity in areas where there is less snow at lower elevations but increase where there is more snow, such as the High Sierra and northern Rocky Mountains.

"The climate and elevation dependence would suggest that other mountainous areas, such as the Andes and Alps would be sensitive to similar changes, but I am not familiar with the research in those areas," Ryberg added, also pointing out that you can sometimes have [rain on snow] events in areas with low elevation (as happened in the Red River of the North Basin of North Dakota, Minnesota, and Manitoba during the spring).

As rain on snow events and other climate change-fueled phenomena increase the number of floods, communities will be left to struggle with one of the most common hardships caused by flooding —having no water that is safe to drink. Indeed, many Montanans have already been left without drinkable water due to the flood.

"Unusual precipitation patterns, which have become more common in recent years and are not likely to abate, put water quality at risk in a number of ways," Dr. Alissa Cox, Program Director of the New England Onsite Wastewater Training Program in the Coastal Institute at the University of Rhode Island, told Salon by email. To illustrate how this is the case, Cox referred to the widely-circulated photographs of water moving swiftly all over the Yellowstone landscape.

"We have all seen images and footage of the power of water when there is lots of it moving swiftly — the destruction evident in the aftermath of flooding, based on damage to structures is astounding," Cox explained. "However, we cannot see below-ground, and so we often forget about some of our buried infrastructure that can also have major impacts on ground and surface waters during and after flooding events." Buried tanks can be damaged due to the flooding, from underground oil tanks to gas station tanks, as well as septic systems; likewise, drinking wells can be fatally compromised by these floods. Breaching these tanks can pollute drinking water supplies, which are then further contaminated by the sediments and other debris washed around by rampaging flood waters.

Dr. Alex K. Manda, an associate professor of geology at East Carolina University, elaborated to Salon in writing about other ways that water quality can be undermined during a flood.

Finally, experts agree that some communities — particularly those that are historically more vulnerable to marginalization — will be disproportionately impacted by this aspect of climate change."It's important that folks are aware of these hazards during flood events (flood water can carry many pathogens and compounds that could be dangerous to people's health), as well as after the flood appears to recede," Cox told Salon. "Sometimes it takes a long time for groundwater tables to drop down to pre-flood levels, which means there may not be enough dry soil below your septic system's drainfield infrastructure to properly treat the wastewater moving through the system if a property is being actively used and the occupants are generating wastewater. Anyone relying on a private drinking water well should also have their well water tested to make sure the water is safe to drink, and talk to a professional about whether/how to decontaminate the well if it has been compromised."

"It's likely to be the same populations already bearing heavy burdens from intersections of severe floods, inadequate protective infrastructure, and insufficient disaster recovery resources," Dr. Eric Tate, associate professor of geographical and sustainability sciences at the University of Iowa, told Salon when asked who was more likely to be "left behind" by climate change-caused flooding. "These include households living in poverty, renters, racial minorities, and residents of mobile homes. But as a nation, we know a lot more about how floods develop and the damage inflicted to physical assets than who is left behind and how."