Saudi-funded LIV Golf tour comes to Trump's Bedminster club as he claims, "Nobody has gotten to the bottom of 9/11" 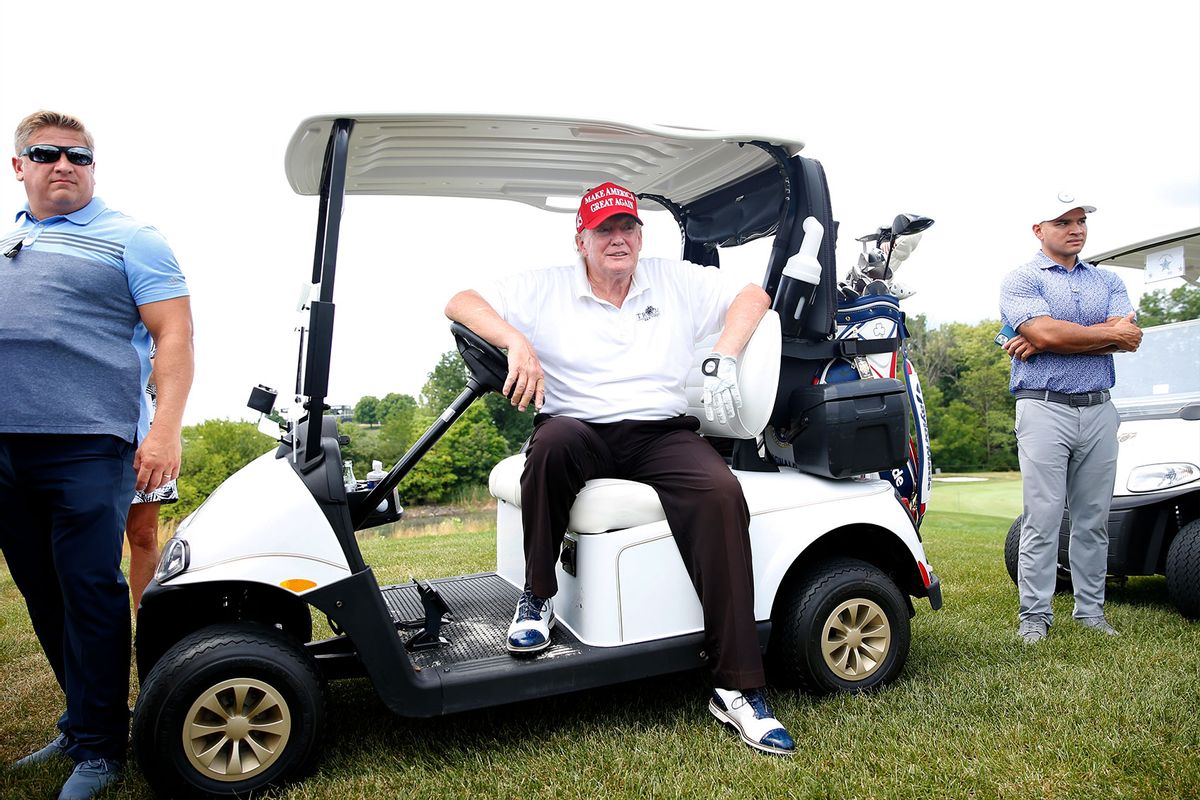 Former U.S. President Donald Trump waits on the ninth tee in his golf cart during the pro-am prior to the LIV Golf Invitational - Bedminster at Trump National Golf Club Bedminster on July 28, 2022 in Bedminster, New Jersey. (Jonathan Ferrey/LIV Golf via Getty Images)
--

Donald Trump brought his bloated bling back to Bedminster, New Jersey, last weekend, under the 24/7 protection of the taxpayer funded U.S. Secret Service.

The occasion was the Trump National Golf Club hosting the first East Coast tournament of LIV Golf, the controversial series funded by the Saudi Public Investment Fund, which chaired by Crown Prince Mohammed bin Salman, the de facto ruler of Saudi Arabia. Prince Mohammed, better known around the world as MBS, was identified by U.S. intelligence agencies as behind the 2018 murder and dismemberment of Jamal Khashoggi, a Saudi dissident and opinion columnist with the Washington Post. MBS is also responsible for initiating and prosecuting a brutal war in Yemen, which has festered into what UNICEF describes as "one of the world's largest humanitarian crises."

Trump will do anything for Saudi crown prince, but won't call U.S. victims of Saudi terrorism

The LIV tournament sparked a protest at the Somerset County course from a contingent of 9/11 victims' families who have been locked in prolonged litigation against the Saudi government, alleging that the desert kingdom provided material support to the 19 hijackers — 15 of them from Saudi Arabia — who were responsible for the deaths of nearly 3,000 people that day. Osama bin Laden, then the leader of al-Qaida, was the the son of one of Saudi Arabia's wealthiest oligarchs.

Family members of those who died on 9/11 have blasted the former president as well as the superstar golfers who are reportedly pocketing six-figure fees for participating in the Saudi-financed event. Trump downplayed those concerns.

"I have known these people for a long time in Saudi Arabia and they have been friends of mine for a long time," Trump told an NBC TV crew last week. "Nobody has gotten to the bottom of 9/11, unfortunately, and they should have as to those maniacs who did that horrible thing to our city, to our country, to the world. So nobody has really been there, so I can tell you there are a lot of great people who are out here today and we are going to have a lot of fun. We are going to celebrate."

Before the tournament,  Brett Eagleson, a founder of the group 9/11 Justice, whose father died helping people evacuate from the World Trade Center towers, told Politico his group would be on site to protest leading golf pros like Bryson DeChambeau, Dustin Johnson and Phil Mickelson for "choosing to take Saudi payouts and look the other way on the country's human rights abuses and role in the worst terrorist attacks on American soil."

NJ Advance's Steve Politi offered a vivid account of how the July 29 LIV Golf event opened, with AC/DC's "Thunderstruck" blaring while three paratroopers landed "on a fairway nearby carrying a giant American flag." The veteran sportswriter described how Mickelson stepped up to hit his first tee shot and "a heckler cracked the silence with a biting commentary about who is paying his massive salary. "'DO IT FOR THE SAUDI ROYAL FAMILY!' the man yelled."

When legendary golf pro Phil Mickelson stepped up to take his first tee shot at Trump's Bedminster club, a heckler cracked the silence: "Do it for the Saudi royal family!"

In the years since the 9/11 attacks, more people have died from exposure to the air that the EPA — then under the leadership of former New Jersey Gov. Christie Whitman — erroneously said was "safe to breathe" than died on 9/11 itself. More than 10,000 New Jersey residents are enrolled in the 9/11 WTC Health Program, which treats first responders and survivors with a myriad of chronic diseases and dozens of life-threatening cancers.

Back in 2016, the 9/11 families and their supporters scored a major political victory when they marshaled a bipartisan congressional coalition that overrode Barack Obama's veto of the Justice Against Sponsors of Terrorism Act, which gives U.S. victims of international acts of terrorism the ability to sue foreign governments they believe were complicit.

In the immediate aftermath of the 9/11 attack, the Bush administration "downplayed the Saudi connection and suppressed evidence that might link powerful Saudi Arabia's wealthiest families to the funding of Islamic extremism and terrorism," according to former New York Times journalists Eric Lichtblau and James Risen, writing for The Intercept in 2021:

Many U.S. officials have insisted over the last two decades that the American government is not really hiding any conclusive evidence of Saudi involvement, and it is quite possible that successive presidents, along with the intelligence community, have closed ranks simply to avoid revealing classified information. And it's plausible that officials want to avoid exposing details that might be politically embarrassing for both Washington and the Saudis yet don't prove that the Saudi royal family, the Saudi government, or other powerful Saudi individuals played any role in providing funding or assistance for the September 11 attacks. But the refusal to be open and transparent about such a fundamental issue has fed suspicions.

Two decades later, however, glimpses of material that have become public provide mounting evidence that senior Saudi officials, including one diplomat in the Saudi Embassy in Washington, may in fact have indirectly provided assistance for two of the Al Qaeda hijackers, Khalid al-Mihdhar and Nawaf al-Hazmi, who were the first of the hijackers to arrive in the United States in 2000 and lived for about a year and a half in San Diego beforehand.

Following the release by the Biden administration of previously classified FBI files, NPR reported that "the partially redacted report shows a closer relationship than had been previously known between two Saudis in particular — including one with diplomatic status — and some of the hijackers. Families of the 9/11 victims have long sought after the report, which painted a starkly different portrait than the one described by the 9/11 Commission Report in 2004."

The 9/11 Commission was at best agnostic about the Saudi connection. Investigators for the panel, which was co-chaired by former New Jersey Gov. Tom Kean Sr., estimated that the 9/11 attack cost the al-Qaida conspirators just $400,000 to $500,000 to execute, but that the global network ran on $30 million a year that it largely got from a network of charities.

"Saudi Arabia has long been considered the primary source of al Qaeda funding, but we have found no evidence that the Saudi government as an institution or senior Saudi officials individually funded the organization," according to the report. "Still, al Qaeda found fertile fund-raising ground in Saudi Arabia, where extreme religious views are common and charitable giving was both essential  to the culture and subject to very little oversight."

Furthermore, the report notes that "to date, the U.S. government has not been able to determine the origin of the money used for the 9/11 attacks. Ultimately the question is of little practical significance."

Both Democratic and Republican administrations have struggled trying to balance the geopolitical interests of the U.S. with the nation's insatiable thirst for cheap oil and its image as a supporter of human rights, which often puts the U.S. at odds with the Saudi government, as in the case of the gruesome Khashoggi murder.

As a candidate, Joe Biden vowed to "make [the Saudis] pay the price" for Jamal Khashoggi's murder. But by this summer, facing a global spike in oil prices, he was fist-bumping MBS on a trip to the kingdom.

As a candidate, Joe Biden said he was "going to, in fact, make them [Saudi Arabia] pay the price" for that crime, "and make them, in fact, the pariah they are." As president, he pledged that human rights would "be the center of our foreign policy." But in mid-July, facing a global spike in oil prices and the need for support in his campaign against Russia's invasion of Ukraine campaign, he was fist-bumping MBS on a trip to the kingdom.

Meanwhile, Trump's post-presidential dealmaking with the Saudis gives off the familiar odor of self-dealing.

Trump's beleaguered resort empire lost considerable prestige after a decision by the PGA of America to move its 2022 championship away from his New Jersey golf course just days after the Jan. 6 insurrection. As the Washington Post reported at the time, PGA president Jim Richardson issued a video in which he said it had become "clear that conducting the PGA Championship at Trump Bedminster would be detrimental to the PGA of America brand and would put at risk the PGA's ability to deliver our many programs and sustain the longevity of our mission."

With several hundred billion dollars available in the Saudi Public Investment Fund, the desert monarchy has made major investments in U.S. blue chip stocks like Uber, according to Bloomberg News. It has spread the fossil-fuel cash around, buying a controlling interest in the English Premier League club Newcastle United for $368 million and dropping hundreds of millions on LIV Golf, an upstart competitor to the PGA.

Last spring, MBS reportedly overruled the sovereign wealth fund's professional asset management professionals to grant Jared Kushner's startup private equity firm $2 billion. As the New York Times reported in April, the expert panel sought to reject Kushner's proposal because of the "inexperience" of his firm and after a review of its operations found them "unsatisfactory in all aspects." Fund officials also balked at Kushner's "excessive" asset management fees, and the perceived "public relations risks" of doing business with the son-in-law and close adviser to Donald Trump.

Within the Trump White House, Kushner was seen as the point man doing damage control for MBS and the Saudis after the murder of Khashoggi, a Virginia resident who had become one of the most effective expatriate critics of the Saudi royal family. According to the New York Times, MBS and Kushner continued to exchange back-channel phone calls and texts well after Khashoggi's death.

"As the killing set off a firestorm around the world and American intelligence agencies concluded that it was ordered by Prince Mohammed," the Times reported, "Mr. Kushner became the prince's most important defender inside the White House, people familiar with its internal deliberations say."

Nothing to see here: Just one royal family helping another.

about the U.S. and Saudi Arabia