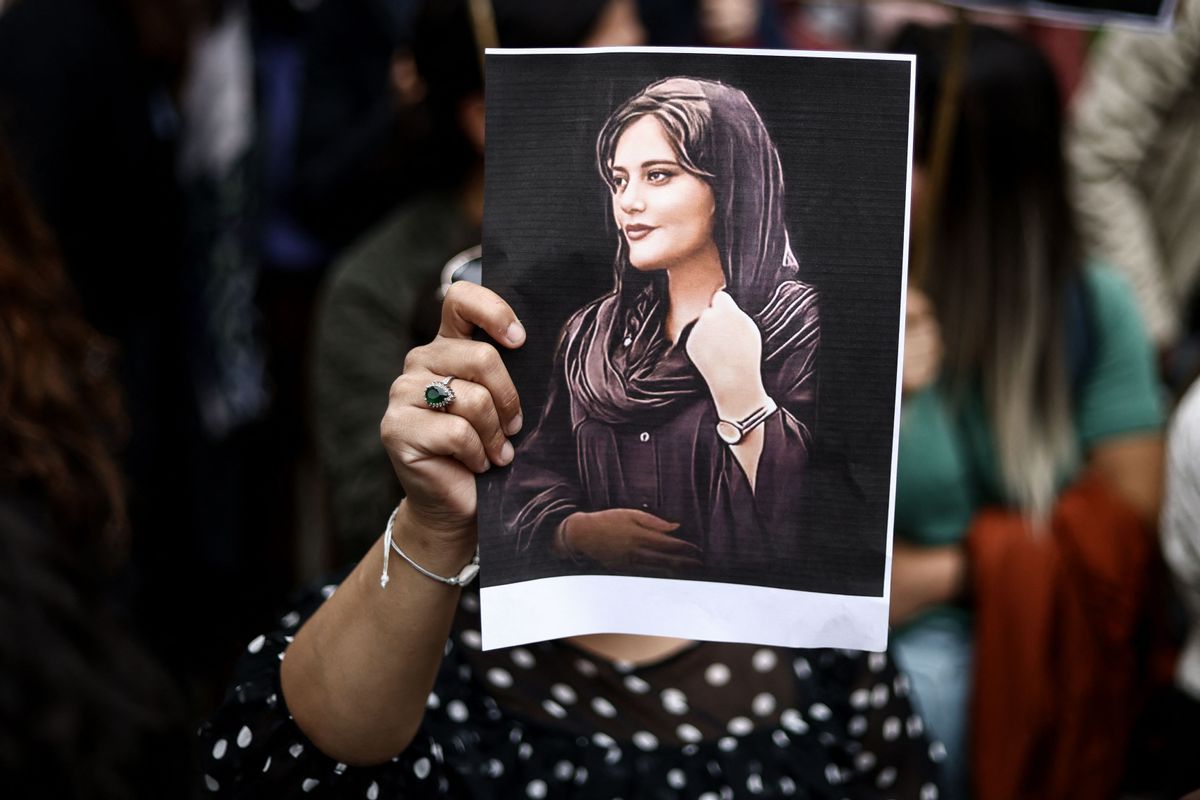 A protester holds a portrait of Mahsa Amini during a demonstration in her support in front of the Iranian embassy in Brussels on September 23, 2022, following the death of an Iranian woman after her arrest by the country's morality police in Tehran. (KENZO TRIBOUILLARD/AFP via Getty Images)
--

On Sept. 16, Mahsa (Zhina) Amini, a 22-year-old Iranian woman of Kurdish ethnicity, was arrested by Iran's "morality police" for violating the law that requires women to wear a headscarf (hijab). While Amini was in police custody, shocking images surfaced of her in a hospital bed, apparently bruised and battered. Hours later, she was dead.

Protests quickly erupted across 80 cities in the Islamic Republic of Iran. Demonstrators gathered to cut off their hair, burn their hijabs and seize control of their streets, if only temporarily. They chanted, "زن، زندگی، آزادی" — "Women, life, freedom."

Days later, video of another woman went viral, showing 20-year-old Hadis Najafi chopping off her uncovered blonde hair in front of Iranian police. She was praised for her bravery online and became a symbol of the women's uprising overnight. On Sept. 25, Najafi's family released images from her funeral: She had been shot numerous times by Iranian security forces, through the neck, face, hand and heart.

There is no way to know how many lives have been lost since Amini's killing. Amnesty International has reported at least 41 deaths, including at least four children, since the start of the protests, but no official numbers have been released. As with any news of civil unrest in Iran, the first response from Western governments has been sanctions.

On Monday, EU foreign policy chief Josep Borrell condemned the Iranian state's use of force and threatened further sanctions. "For the European Union and its member states, the widespread and disproportionate use of force against nonviolent protesters is unjustifiable and unacceptable," he said.

Canadian Prime Minister Justin Trudeau also said that his nation will levy sanctions on Iran. "Today, I'm announcing that we will implement sanctions on dozens of individuals and entities, including Iran's so-called morality police," he said.

In the U.S., many Republicans are calling for an end to negotiations with Iran on renewing the nuclear deal, an international agreement made under the Obama administration from which Donald Trump withdrew in 2018. "The Iranian government murdered a woman for not wearing a headscarf," wrote Sen. Marsha Blackburn, R-Tenn., on Twitter. "How can Joe Biden still be pushing for a nuclear deal with a terrorist regime?" Former Secretary of State Mike Pompeo echoed her response, calling for additional sanctions against Iran.

These statements and actions are not unfamiliar to Iranians on the ground, since these are the typical responses from Western political leaders whenever there are signs of social and political change in their country. Sanctions are seen as the quick fix to any issues Europe or the U.S. may have with the Islamic Republic, but are perhaps better understood as a Band-Aid for a bullet hole.

U.S. administrations of both parties have long been fixated on playing "tough" with Iran — excepting the diplomatic breakthrough under Obama — but enforcing a sanctions regime is not a helpful way to respond to this moment of remarkable change on the ground. Sanctions are a brute-force instrument, likely to cause more harm to the people risking their lives for this movement. Furthermore, the endless call for more sanctions ignores the integral role of the U.S. and EU in creating economic circumstances that have allowed the morality police to hold power in the first place.

Ever since the 1979 Iranian Revolution, and even more so after 9/11, U.S. presence in the region has offered extremist leaders in Iran and elsewhere an easy way to exploit populist outrage and gain more power. According to Iranian-American writer and activist Hoda Kotebi, the election of hard-line Iranian President Ebrahim Raisi was a byproduct of the Trump administration's "maximum pressure sanctions."

As Kotebi also points out, this also allowed people connected to the government and the elite, including Iran's Revolutionary Guards, to "seize an even bigger share of the national economy, concentrating wealth in their hands."

Four years ago, Ali Vaez, the Iran project director at the International Crisis Group, warned that the Trump administration's efforts to "deepen Iran's domestic fault lines" were likely to cause the political élite in Iran to "close ranks and bring down the iron fist."

"Trying to appropriate Iranian women's discontent to advance regime change," Vaez concluded, "is a surefire way to undermine their cause."

It would be one thing if the suffering created by sanctions were an unintended result of foreign policy — but U.S. officials have bragged about the pain inflicted on ordinary Iranians, calling it strategic.

Sanctions have created a dire economic situation in Iran, with citizens experiencing some of the worst inflation in their history. Historically, sanctions against nations in the global South have mainly harmed the most vulnerable members of society, such as women and ethnic minorities. A weaker local currency makes it impossible to afford imported goods, and inflation makes the cost of living skyrocket when unemployment is already at crisis levels. Someone like Mahsa Amini, a working-class woman from Iran's Kurdish minority, would in all likelihood have been hit the hardest by these sanctions.

Sanctions also often mean severely limited access to health care and essential medicines, like epilepsy drugs or chemotherapy; there is evidence that some poorer Iranians have even offered to sell their organs in the past.

It would be one thing if this suffering were an unintended result of foreign policy, where the theoretical ends justify the painful means. But American officials have often bragged about the pain inflicted upon ordinary Iranians, calling it intentional and strategic. "Things are much worse for the Iranian people [with the sanctions], and we are convinced that will lead the Iranian people to rise up and change the behavior of the regime," Pompeo told CBS News in 2019. Even if we followed this flawed logic, the Iranian people have proven their discontent with their leadership repeatedly. How would sanctions conceivably benefit them in this specific situation? How do collective punishment and additional financial burdens aid the women's liberation movement in the Middle East?

In fact, to call for sanctions now means specifically ignoring what Iranian women on the ground, the true leaders of this movement, have been fighting for. To best support this fight for female liberation, we must listen to their calls for the immediate lifting of sanctions — especially regarding free internet access — and protect their futures.

The chant of the street protesters — "women, life, freedom" — is not simply a romantic slogan or a rallying cry: it spells out their exact demands, both from the Iranian regime and the larger world. There is no freedom for women who live under an oppressive, misogynistic government, the threat of foreign military invasion or crushing economic sanctions. Perhaps it's finally time for people in America and all over the West to hear what Iranian women are asking for instead of relapsing into macho foreign policy clichés that simply don't work.