For Sudan's military regime, Putin's an old friend — and for the Sudanese people, the U.S. simply can't be trusted 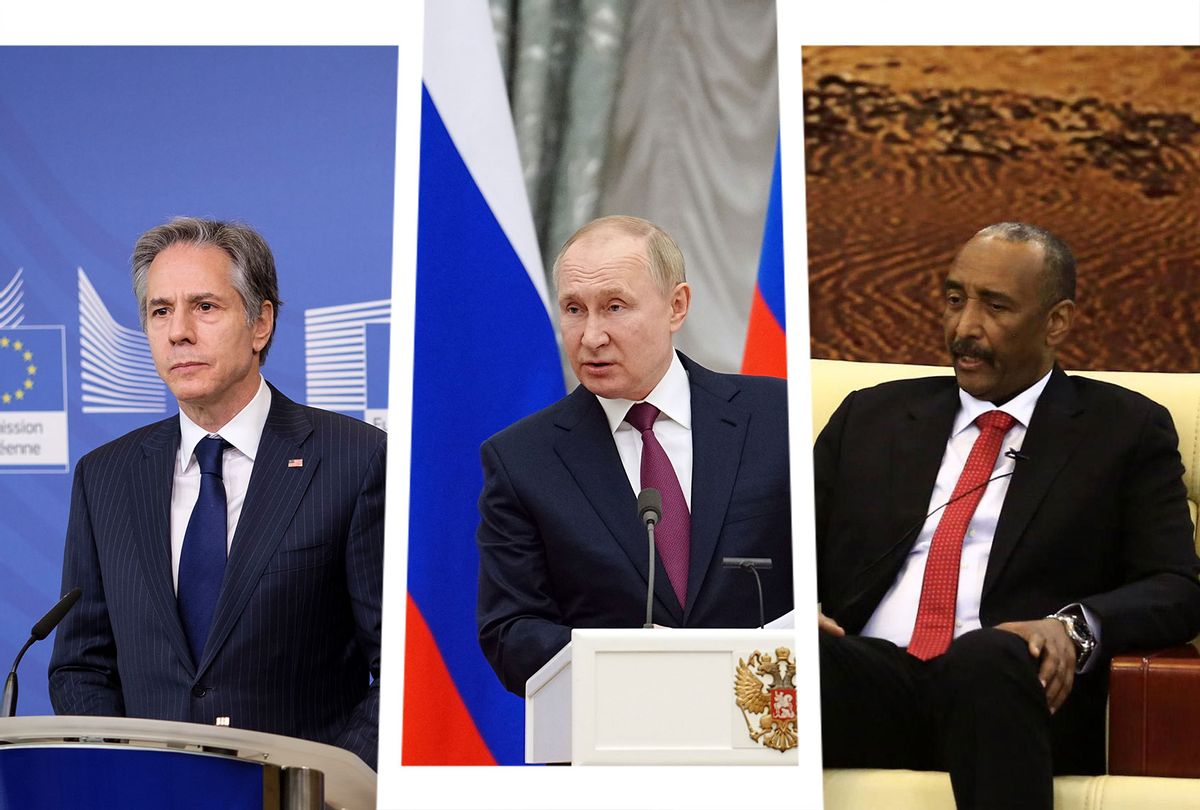 There is considerable current discussion about whether the decades-long push of NATO's expansion eastward, encouraged by the United States, is to be blamed for the Russian invasion of Ukraine, as famous "realist" John Mearsheimer, of the University of Chicago, has argued. That discussion should also include whether the U.S. is to blame for the refusal, or at least the hesitancy, of some Arab countries to condemn the Russian invasion, which reflects widespread Arab resentment of U.S. policy over the last several decades.

As Time magazine reported last week, the Arab League, representing 22 Arab countries, issued a recent statement that "failed to condemn Russia's invasion and offered little support to the Ukrainians." This was largely because, according to Time, the Arabs "generally see in Russia a substantial global power that continues to have relevance in their region … and is, also, a useful capital to publicly 'flirt' with when relations are strained" with the U.S. and the West.

Recent policies seen in Sudan, a member of the Arab League, offer one example.

Along with fellow Arab League nations Algeria and Iraq, Sudan abstained when the UN General Assembly overwhelmingly condemned the Russian invasion. (Morocco was absent, or might very well have joined them.) Additionally, after a week-long visit to Russia during the invasion, Sudan's second most powerful leader, Gen. Mohammed Hamdan Dagalo, also known as "Hemedti," said his country had no problem with Russia opening a naval base on its Red Sea coast.

Dagalo told a news conference upon his return to Khartoum, according to Reuters, that "Russian investments were discussed on the trip," and although he called for a diplomatic solution to the Ukraine problem, before the invasion he had said that "Russia had the right to defend its people."

Dagalo was the leader of the famous Arab Janjaweed militia that, starting in 2003, fought on the side of the Sudanese Islamist military government led by Gen. Omar al-Bashir in the western province of Darfur. That led to what has been described as the worst genocide of the 21st century, resulting in the death of hundreds of thousands of civilians and the displacement of millions. Dagalo's forces relied heavily on Russian and Chinese weapons during that conflict.

Although Dagalo's relations with the U.S. improved after a popular revolution in Sudan toppled al-Bashir in 2019, he recently went back to his old Russian friends — and it's more than the "flirt" mentioned by Time.

At the same time, the Sudanese people have their own grudges against the U.S. for not fulfilling its promises to promote democracy in their country after the toppling of al-Bashir.

RELATED: Uprising in Sudan: Does this African nation offer a window of hope onto the future?

For decades, Sudan's relations with Russia have been in direct response to its relations with the U.S., an openly cynical policy that sought to play the two global powers against each other.

Al-Bashir, whose rule started in 1989, collided with the U.S. from the beginning by declaring "al-Mashru' al-hadari al-Islami" (or the "Islamic Civilization Project"), intended to spread Islam in neighboring Christian countries; by fighting Christian and pagan citizens in the southern part of the country; and by leading a radical pan-Islamic group that invited known Muslim terrorists, including Osama bin Laden, to visit or reside in Sudan.

In response, the U.S. in 1993 designated Sudan as a sponsor of terrorism, imposed complete trade and financial sanctions in 1997 and launched a cruise missile attack on Sudan in 1998, as part of the response to the terrorist bombing of U.S. embassies in East Africa that same year.

Beyond the "flirt," Sudan allied with Russia not only by buying arms for its wars in Darfur and in the southern part of the country, but by enjoying Russian support at the UN against attempts to punish Sudan or its leaders for apparent or likely war crimes.

But after the 2019 revolution that toppled al-Bashir, relations between Sudan and the U.S. changed overnight. Steps were taken to remove Sudan from the terrorism list, exchange ambassadors, recognize Israel and clear Sudan's arrears with the World Bank, allowing for massive infusions of aid.

Most important, statements by top U.S. officials, some of whom visited Sudan, promised help for Sudan to run free and fair elections, which were meant to lead to a stable civilian government.

Secretary of State Antony Blinken said, on the second anniversary of the revolution: "Sudanese from all walks of life — especially Sudan's women and youth — showed great courage in taking to the streets. Some paid with their lives. Their bravery and sacrifice will forever remain an inspiration to all those seeking democracy. …The United States will continue to stand with the Sudanese people as they strive for freedom, peace and justice."

Sen. Chris Coons, D-Del., tweeted: "As Sudan transitions toward a civilian & democratic government after the removal of long-time dictator Omar al-Bashir, it's critical to send a signal of support from the U.S. for the new government & to the Sudanese people fighting for their fundamental rights & freedoms."

Later, he and Sen. Chris Van Hollen, D-Md., traveled to Sudan and conveyed similar messages to both the military and the civilians. Coons introduced the Sudan Democracy Act to sanction those who undermine democracy, and announced that he had nominated several Sudanese civilian organizations for the Nobel Peace Prize.

But Blinken, the two senators and other top officials knew, or at least should have known, that the Sudanese military leaders who supported the popular uprising against al-Bashir and then joined the transitional government that was supposed to run free elections next year were not going to relinquish power easily.

First of all, the Sudanese military over the years has acquired private companies and established many of their own — about 300 companies altogether, which control about 70 percent of the government's annual budget.

Second, both Gen. Abdel-Fattah Burhan, chairman of the Transitional Sovereignty Council, and his deputy, Gen. Dagalo, are said to be on a list of those under investigation by the International Criminal Court for possible war crimes in Darfur. (Seven current or former Sudanese officers have already been indicted.)

Third and most important, the leading U.S.-allied governments in the region have strongly supported the Sudanese military, including Egypt, Israel and the Gulf states.

Blinken, Coons, Van Hollen and other top U.S. officials were said to have been surprised — but shouldn't have been — when, last October, the military faction of the shared transitional government, led by Burhan and Dagalo, launched a coup of their own, arresting their leading civilian allies and returning to power Islamist leaders from the al-Bashir regime.

Hundreds of civilians have been killed and thousands more injured during the last three years of demonstrations against the military. No end seems in sight.

When the U.S., the UN, the World Bank and the international community condemned the coup and suspended all promised economic and financial help to Sudan (amid repeated calls to end the violence against civilians), Dagalo and the military regime were ready to play the Russian card once again.

What should be done with Sudan now? The experience, if not the wisdom, of this 80-year-old journalist — who was born and raised in Sudan — suggests that Secretary Blinken, the two senators and other top U.S. officials who had promised to guarantee democracy for the Sudanese people should travel there again, with the goal of negotiating a compromise between the military leaders and the unarmed, mostly young pro-democracy demonstrators.

RELATED: Veteran Arab journalist: If coronavirus gets me, I'm going back to the White House

Attempting to punish the military regime by freezing badly-needed financial and economic aid will mostly hurt ordinary people in Sudan, as happened during the 30-year rule of the al-Bashir regime. The World Bank, always following the ups and downs of U.S. policy, should also restore its frozen aid. Finally, the U.S. should hold the current military leaders accountable for their repeated promises to run free and fair elections next year and then hand power to an elected civilian government.

There is no sense in the U.S. punishing the Sudanese people for its own refusal to follow through on its promise to help establish democracy in their country. It's also no secret that the U.S. record of support for democracy in Arab countries is nil — and deeply shameful.

In 2013, the U.S. supported a military coup in Egypt, Sudan's neighbor, that toppled Egypt's first-ever elected president — negating years of earlier statements by top U.S. officials about supporting democracy in Egypt. Today, the U.S. sends an annual average of about $2 billion in military and civilian aid to Gen. Abdul-Fattah el-Sissi's military regime in Cairo.

The cynical Sudanese generals, Burhan and Dagalo, have made no secret of their belief that the U.S. should treat them as it has treated their next-door neighbor — that's the price of their friendship.

Finally, the U.S. has no one to blame but itself for Sudan's reluctance, along with that of other Arab countries, to condemn the Russian invasion of Ukraine. The major factors include the decades-long U.S. support of Israel's expansionist policies; the U.S. invasion of Iraq in 2003, which disordered the entire region; and the aforementioned poor record of the U.S. in supporting Arab democracy.

As a result, we face the ironic fact that there is no democratic Arab country available today to point out an obvious contradiction: The U.S. is eager to support democracy in Ukraine, but far less so in the Arab world.

Read more on the Ukraine conflict and the state of the world: