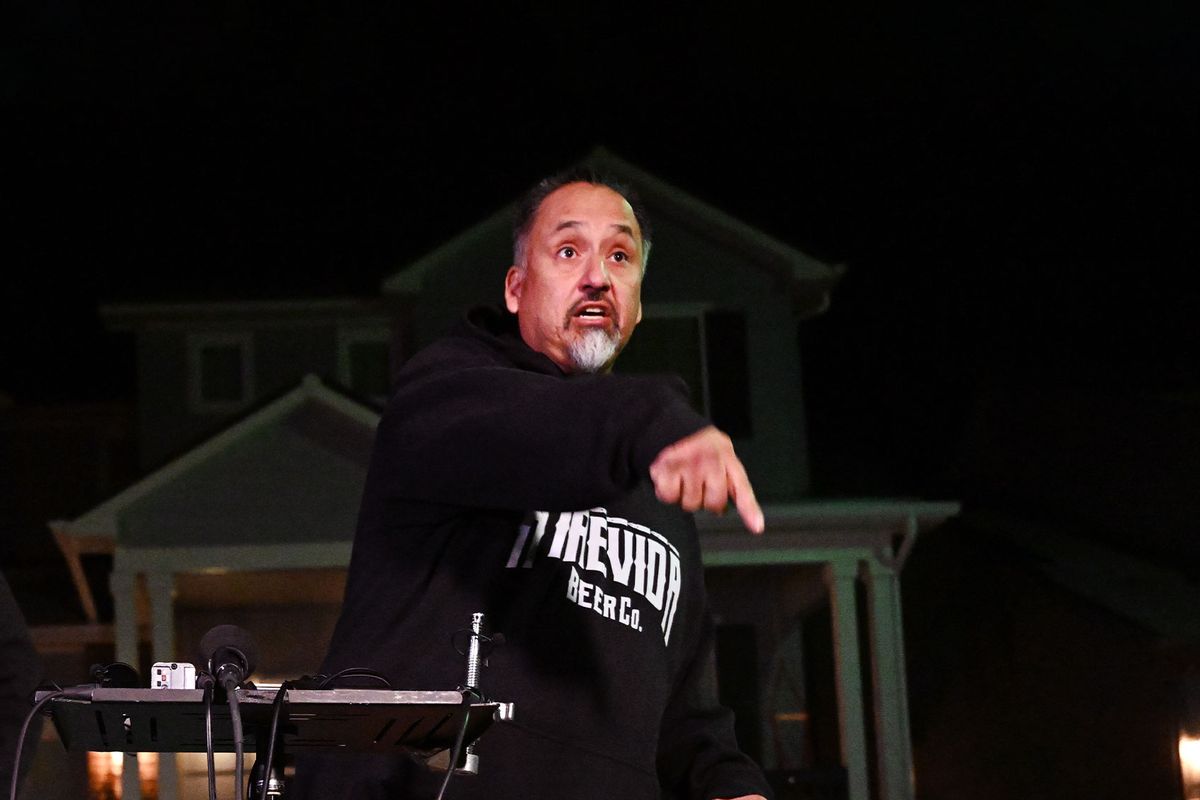 Richard Fierro describes how he took the shooter down the night of the shooting at Club Q while outside of his home on November 21, 2022 in Colorado Springs, Colorado. (Helen H. Richardson/MediaNews Group/The Denver Post via Getty Images)
--

Minutes after a gunman opened fire at an LGBTQ nightclub in Colorado Springs, killing five people and wounding at least 17 others, officers rushed into the chaotic scene and forcefully detained the man who helped stop the shooting.

Richard Fierro was at Club Q with his wife, daughter and her boyfriend on Saturday watching a drag show when gunfire erupted across the bar. The 15-year Army veteran's combat instincts kicked in, he said, and Fierro tackled the attacker to the ground before he could make his way to the patio, where people had fled.

"I tried to save people and it didn't work for five of them," Fierro told The Associated Press. "These are all good people. ... I'm not a hero. I'm just some dude."

The gunman dropped his rifle and pulled out a pistol, which Fierro used to beat him with. Fierro said he told a drag dancer, who was passing by to stomp on the attacker with her high heels.

Together, Fierro and Thomas James subdued the attacker before officers arrived at the scene.

As Fierro was about to go back to his wife and daughter, officers "tackled" him after seeing him with the shooter's gun, according to The New York Times. "They put him in handcuffs and locked him in the back of a police car for what seemed like more than an hour. He said he screamed and pleaded to be let go so that he could see his family," the outlet reported, before he was ultimately freed.

In Colorado, hate crimes are known as "bias-motivated" crimes with Colorado law defining them as intimidation, harassment or physical harm that is motivated at least partly by bias against a person's race, religion, nationality, age, disability or sexual orientation.

"It is important to let the community know that we do not tolerate bias motivated crimes in this community, that we support communities that have been maligned, harassed and intimidated and abused," Michael Allen, the El Paso County district attorney, said at a Monday news briefing. "And that's one way that we can do that, showing that we will put the money where our mouth is, essentially, and make sure that we try it that way."

Club Q served as a sanctuary for the local LGBTQ community, offering drag shows, karaoke and dance parties for those 18 years and older.

During an appearance on "CNN Newsroom with Jim Acosta,"  Polis said the club was a safe refuge for people.

"It was a place where people could, in a conservative community, often get the acceptance that too many of them might not have had it at home or in their other circles and to see this occur is really just put us all in a state of shock here in Colorado and across the country," he said.

The shooting came on the eve of Sunday's Transgender Day of Remembrance, which occurs annually on Nov. 20 to honor victims of anti-trans violence.

Rump was a bartender at Club Q who had "found a community of people that he loved," his sister Julia Kissling told CNN affiliate WFMZ.

Aston was a bar supervisor at Club Q, who created a "positive culture" for employees, his colleague Michael Anderson told CNN.

Paugh worked at Kids Crossing – a nonprofit that helps find homes for foster children. Her family released a statement saying her daughter Ryleigh "was her whole world."

Loving's sister also provided a brief statement to CNN, saying: "My sister was a good person. She was loving and caring and sweet. Everyone loved her. Kelly was a wonderful person."

Vance was visiting Club Q for the first time with his longtime girlfriend and her parents when the shooting happened.

"His closest friend described him as gifted, one-of-a-kind, and willing to go out of his way to help anyone," a statement released by his family said.

Fierro's family got a call Sunday from Vance's mother informing them his daughter's boyfriend had died in the shooting.

"This whole thing was a lot, my daughter and wife should've never experienced combat in Colorado Springs. And everybody in that building experienced combat that night, not to their own accord, but because they were forced to," Fierro told CNN.

The suspect remains under investigation with no formal charges filed in court yet.

about the Club Q shooting and police