If "A Christmas … Present" shows what Candace Cameron Bure means by tradition, she can keep it

Her first new GAF holiday movie may be as corny as her Hallmark fare, but it has 500% more scripture references! 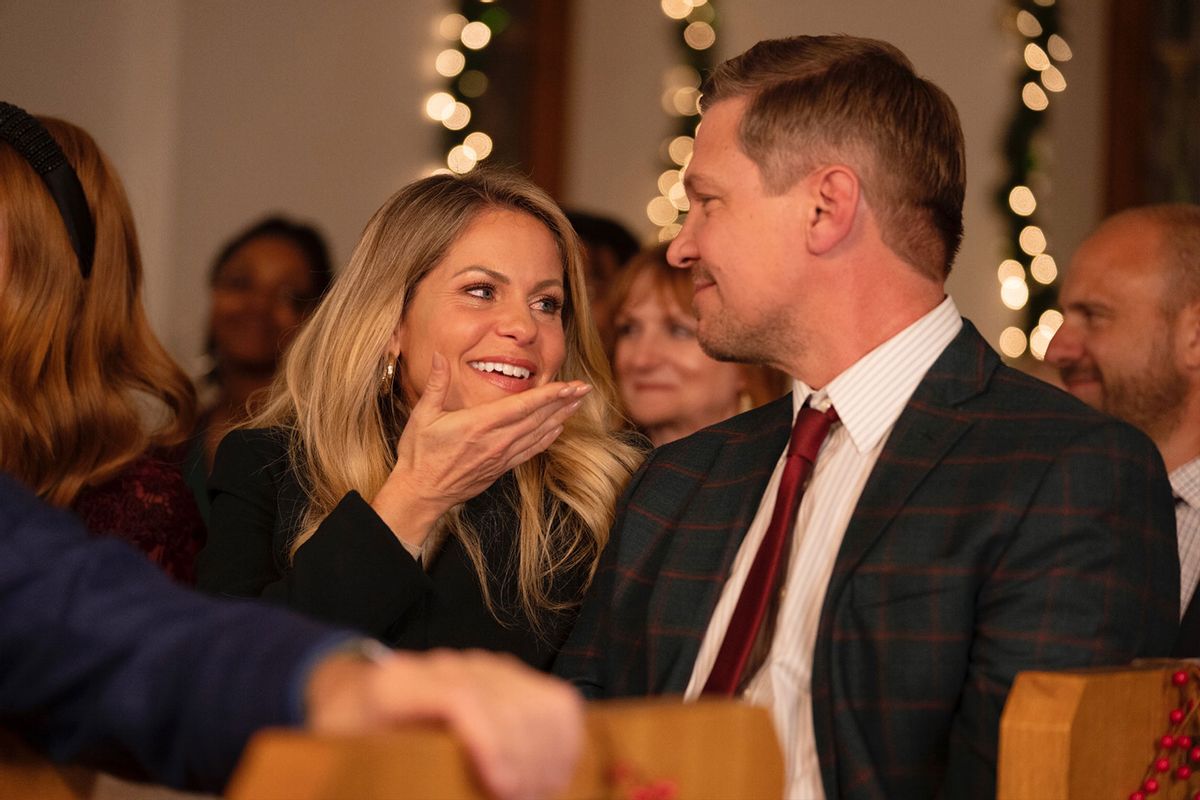 Candace Cameron Bure truly believes that we need Christmas now more than ever, with all of its, ahem, "tradition."

By golly, does she ever give it to us with a supersized serving of God-stuff, as promised, in her Great American Family film debut "Candace Cameron Bure Presents: A Christmas . . . Present."

The message is so simple that it's in the title: All anyone should want for Christmas is their loved ones around them. But the great present is our presence with one another. If this sounds like New Agey spirituality, aka the Devil's jargon, that is because it is. Being present is central to meditation and mindfulness, and the power of Candace compels me to get back to the core premise. 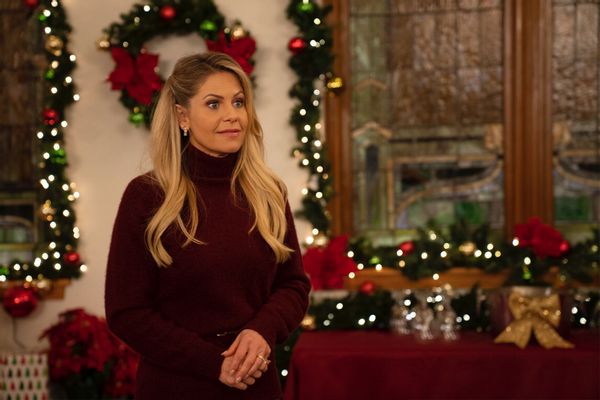 See, in "A Christmas . . . Present," being present largely means staying at home instead going out to do stuff, and singing hymns around your backyard firepit which, like, everybody has, right? These are the lessons Bure's very busy Chicago real estate agent and supermom Maggie learns when she drags her husband Eric (Marc Blucas) and two children to the small Ohio town where she grew up to hang out with her recently widowed brother Paul and his daughter.

To Maggie, coping with the great big downer of his wife dying of some illness takes a back seat to the importance of Paul celebrating the first Christmas without his wife "the right way."

Therefore, despite Paul's insistence that he and his kid are fine baking cookies and sitting by the fire together, Maggie, Eric, and the kids invade their space, and Maggie's pathologically over-packed schedule conquers theirs.

Hallmark Christmas movie schlock has infected all of TV

This confirms what many suspected of Hallmark's erstwhile Queen of Christmas when she chose to follow that network's former boss Bill Abbott out the door and over to GAF.

We could all use a little holiday. But "A Christmas …Present" is not the sleigh for that job.

Once Hallmark shook off its blanket of pure white heteronormativity and branched out to produce holiday movies featuring LGBTQ+ characters in major roles, Bure obviously did not want her face to continue to represent the network. Receiving a executive salary bump likely influenced her decision as well.

But her coded language about prioritizing "traditional marriage" in its movies sparked outrage among many noble heathens. Former "One Tree Hill" and current Hallmark Channel star Hilarie Burton Morgan called Bure a bigot, and JoJo Siwa characterized her stance as "sh***y."

Bure responded to all of this with a non-apology in which she states, "It absolutely breaks my heart that anyone would ever think I intentionally would want to offend and hurt anyone. It saddens me that the media is often seeking to divide us, even around a subject as comforting and merry as Christmas movies. But, given the toxic climate in our culture right now, I shouldn't be surprised. We need Christmas more than ever."

On that last part, we can agree. We could all use a little holiday. But "A Christmas  . . . Present" is not the sleigh for that job.

Full disclosure: I was never a Hallmark holiday movie fan, but I have seen enough to understand and respect why people incorporate them into their holiday celebrations.

And in the spirit of goodwill, let us for a moment take Bure at her word that she has "great love and affection for all people" and that her heart "yearns to build bridges and bring people one step closer to God, to love others well, and to simply be a reflection of God's huge love for all of us."

With all of that in mind, one would think that the best way for Bure to vindicate herself and (to co-opt the parlance created by the folks she's intent on excluding) make her haters gag would be to make a Christmas movie that's undeniably good.

Believe it or not, I unwrapped "A Christmas . . . Present" with an open mind and heart, fully ready to concede that it might have a few aspects worth recommending. But even by retrograde Hallmark holiday movie standards, it's a blizzard of poor writing and empty schmaltz devoid of propulsive tension or profound resolution, but with 500 percent more scripture references. The church-going Christian people I know wouldn't waste their precious Earthly moments on this spiritless mess. You'd find more depth in two hours of white noise. 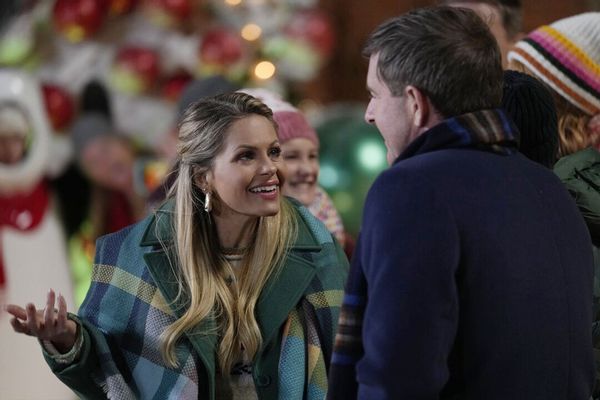 And yet, cosmetically, it is a kind of Christmas movie, one whose target audience seems to be the hypnotized. Nary a scene passes without a sprig of pine or a light. Everybody smiles, and almost constantly. Nobody profusely weeps – not even Paul, the man who, remember, is experiencing his first Christmas without his wife.

That's the second-weirdest part about this. None of Maggie's overbearing infliction of needless running around or boundary-breaching bothers her brother. Not even her obliteration of such sacred territory as replacing Paul's traditional family tree with a bigger one flusters him, even though he didn't ask. His faith in God is so rock-solid that he doesn't need to experience natural human reactions to minor irritations or massive loss.

Now, if this were a Nicholas Sparks joint or some descendent of the Frank Capra school of sentimentality, we'd reach a point of epiphany where Paul and Maggie and the rest lower the dam that's been holding back their feelings, wade through their mess and come out on the opposite side feeling better about each other. But that would generate empathy in the audience, which is antithetical to "A Christmas . . . Present" and its apparent aim of numbing your thought processes for around 90 minutes.

Pre-inclusion era Hallmark Christmas scenery is abundant in this movie.

What about its depiction of "traditional marriage"? Strangely, "A Christmas . . . Present" doesn't make the most compelling case for it. Granted, that is not a Christmas movie's role. Holiday movies typically remind us that love, platonic or romantic, is the blanket keeping the world warm in the darkest months. Weddings might be a part of that, but the chill midwinter of marriage is its own bag, and Santa would rather jingle around other problems. 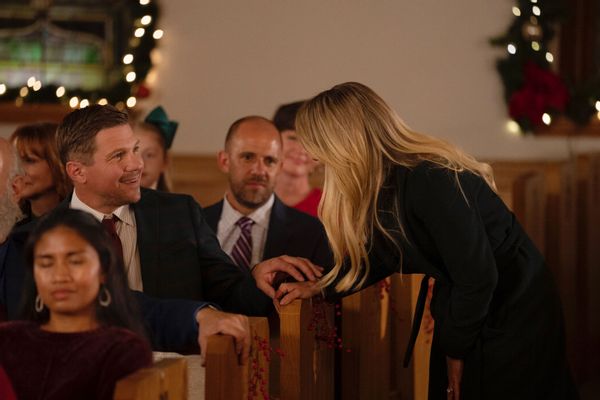 But Maggie and Eric make very little progress toward restoring intimacy. The couple makes time to walk in the snow, and that is not a euphemism – they're getting their steps in while gently arguing until they realize that maybe, just maybe, the solution to their problems is . . . more walking. Also, church.

Otherwise, pre-inclusion era Hallmark Christmas scenery is abundant in this movie. Mary has a Black best friend who isn't around long enough for us to even remember her name. Paul has an Asian neighbor who has taken over carpool duties so he can work on his book; ditto for her on the memorability factor. An Asian actor plays an elf in the Christmas escape room that Maggie drags everyone to, and merrily, they go along here, there, and into the pews at Paul's house of worship, where more Black and brown folks cavort in the background.

Three Wars on Christmases ago, Salon's Senior Humbug Amanda Marcotte pointed out the fascist underpinnings in the way Hallmark packaged "tradition." By associating the term with whiteness and straight relationships, they tacitly but purposefully froze out everyone who doesn't fit that image:

"Instead of characters driven by real feelings, therefore, the guiding hand of 'normalcy' pulls the characters along through narratives — and unsurprisingly, that idea of 'normalcy' doesn't have a lot of room for the true diversity of American experiences," she writes, adding that "the rule of 'normalcy' reorients everything towards a very narrow, sentimentalized version of Christmas."

Hallmark was the target of many critiques of its white, heterosexual Christian homogenous presentation of Christmas over the years, although my colleague's was pointed enough to draw fire from Fox News along with the Least Superman, Dean Cain.

In any case, in the following July, Hallmark Media named Wonya Lucas as its new president and CEO after Abbott stepped down, which happened shortly after Hallmark pulled ads for the wedding company Zola that featured a just-married lesbian couple kissing. Over at GAF, Abbott and Bure are creating a nationalist view of Christmas that they could not longer fully realize at Hallmark. As for how much true competition these movies will present, that remains to be seen.

Under Lucas' leadership Hallmark Channel has expanded its range of holiday film leads to include more non-white actors and families, and as of Holiday 2022 the channel will feature its first Christmas movie centered on a gay romance: "The Holiday Sitter" premieres Dec. 11.

Even if that ends up being as corny as a tree garland – most likely, given the channel's track record – it will surely be a more entertaining gift than "A Christmas . . . Present," and a better fit for any family whose holiday tradition includes welcoming a good time.