Look who came to dinner: Of course Trump has no problem with hardcore white supremacy, and neither does his base 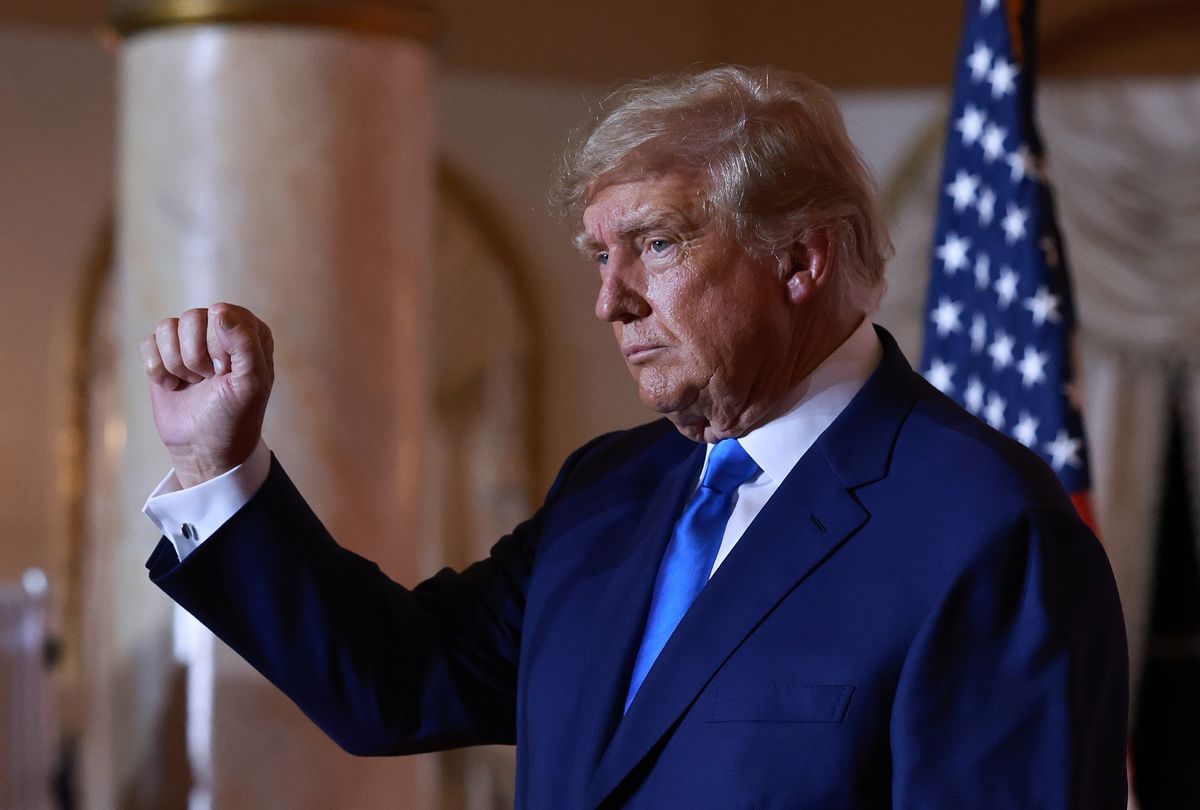 Leave it to Donald Trump to turn what was shaping up to be an unusually mellow Thanksgiving weekend into yet another paroxysm of monstrous racism. Reports started circulating last week that rapper Ye (formerly Kanye West), a noted antisemite, and well-known white supremacist Nick Fuentes had been seen together at the Palm Beach airport, supposedly headed for Trump's residential beach club-slash-classified document repository for some kind of meeting. It was soon confirmed that the duo had dinner with Trump and chewed the fat extensively over their future political careers.

This set off yet another of those Trump brouhahas in which decent people are appalled, the press calls every Republican on their contact list to get comment (which usually fails) and Trump puts out a series of absurd statements both defending himself and attempting to distance himself from the controversy. Everyone wonders WTBTSTBTCB — Will this be the straw that breaks the camel's back? — and it never is.

I suppose that moment may come some day. There may be a red line that finally breaks Trump's hold on the 35% of the Republican Party that believes he is their Joan of Arc. But I very much doubt that, as outrageous as it is, this incident will be that moment. After all, Trump having dinner with such people is nothing new.

For instance, consider that Donald Trump has had dinner innumerable times, traveled the world and spoken virtually every day with a well-known white supremacist named Stephen Miller. He is one of the ex-president's closest advisers even today. Trump has dined with Rep. Marjorie Taylor Greene of Georgia, who is proudly bigoted in just about every way possible, and has spent plenty of time with Fox News celebrity Tucker Carlson, the nation's greatest proponent of the virulently racist "great replacement" theory. Who knows how many others of this ilk are joining him for meals on a regular basis?

Trump denies that he knew Nick Fuentes at all and claimed Ye didn't say anything antisemitic in his presence, so it's no big deal. In a series of posts on Truth Social, he claimed that Ye had begged him for the dinner and showed up with uninvited companions.Trump suggested that he felt sympathetic to Ye's loss of business revenue (resulting from his stream of antisemitic remarks in the last few weeks), and I'm sure he was curious about why that had happened. Trump's businesses have never paid even the smallest price for his grotesque bigotry, so he may have felt an obligation to provide advice on how to escape the consequences. He is, after all, an expert.

As far as the antisemitism is concerned, Trump has his own throwback style. Back in the day, when he was failing miserably in the casino business, he was heard to say, "Black guys counting my money! I hate it. The only kind of people I want counting my money are short guys that wear yarmulkes every day." During the 2016 campaign, he told a group of Jewish donors that they probably wouldn't support him because he couldn't be bought: "You're not going to support me because I don't want your money. Isn't it crazy?" As president he was often heard to say, after getting off the phone with Jewish leaders, that they "are only in it for themselves" and "stick together."

So, no, Trump's antisemitism isn't quite as elaborate or as hostile as Ye's railing against the alleged global Jewish conspiracy. But it is antisemitism nonetheless.

As for Fuentes, a truly odious character reviled by all who aren't completely down the neo-Nazi rabbit hole, he is hardly someone Trump would turn away. In fact, it's likely that if Trump didn't know who Fuentes was when he showed up with Ye, the Secret Service would have informed him. Of course he knew who he was having dinner with that night, and it was perfectly fine with him. In Bob Woodward and Robert Costa's book "Peril," the authors recount a heated conversation between Trump and then-House Speaker Paul Ryan, in the wake of the monstrous Unite the Right rally in Charlottesville in 2017, after Ryan called white supremacy "repulsive." Trump was fit to be tied and accused him of not being "in the foxhole" with him. Ryan replied that Trump had an obligation not to claim moral equivalency between white supremacists and those who protest against them, as Trump had done with his famous "very fine people on both sides" comment. Trump exploded at Ryan: "These people love me. These are my people. I can't backstab the people who support me."

Nick Fuentes was with the "Jews will not replace us" marchers at that rally. He was also at the Jan. 6 insurrection. He is one of Donald Trump's people. In fact, at the dinner, Trump reportedly turned to Ye and said, "I really like this guy. He gets me." Of course he does. They are fellow travelers. Trump sees Ye, a famous and wealthy Black celebrity, as someone worth cultivating, and sees Fuentes as a leader of his base. Their attitudes don't offend him; he very likely agrees with them. More important than that, he believes they are useful to him.

After Charlottesville, Paul Ryan told Trump he had a moral responsibility to renounce white supremacy. Trump exploded: "These people love me. These are my people. I can't backstab the people who support me."

All of this has been well known for years. Trump's racism, antisemitism, Islamophobia, misogyny, etc., have been on display for decades and continued unabated during his presidency and beyond. In that light, I honestly don't see how the ritual demands for Republicans to disavow him are worth bothering with. Sure, a few will timidly peek their heads up over the wall and say that Trump shouldn't have done whatever abominable thing he just did. The press will chase down some others who will say they hadn't heard about it, and it will all pass over until the next time we go through the same cycle all over again.

What we should realize is that unless Trump does something that actually offends his base, they will stick with him — and white supremacists and antisemites are a large part of that base too. I think it's pretty clear by now that Trump's flock don't mind all kinds of racists and extremists breaking bread with their Dear Leader. They're fine with that. Trump knows that and so does the Republican establishment. Many of them don't much like it, but after all this time they clearly don't have the courage to confront it or the integrity to walk away.

So let's just abandon the pretense that the Republicans will ever really do anything about Donald Trump's increasingly snuggly relationships with white supremacists and antisemites and far-right zealots and extremists of all kinds. Let's just assume that for all practical intents and purposes, they're on board.