Psychedelic shops are openly selling trippy fungi in a growing number of cities. Is this just the beginning? 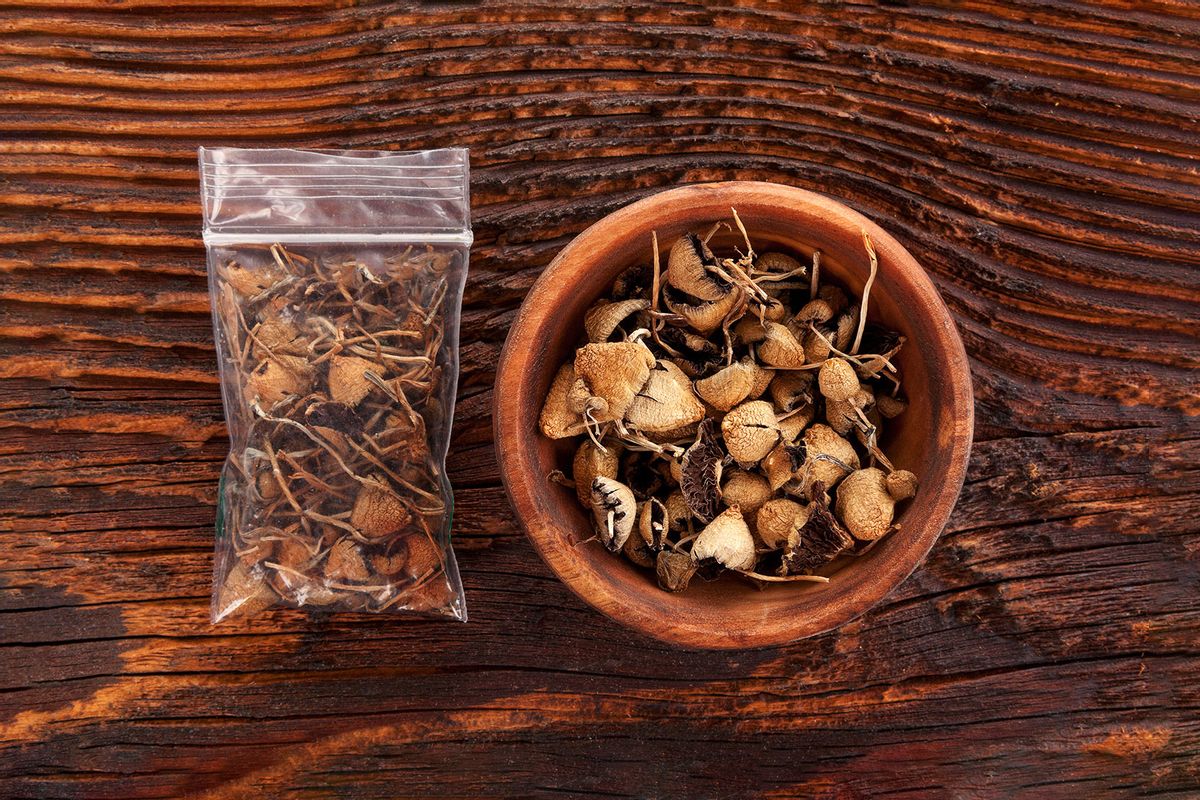 Not unlike fresh mushrooms after a gentle rain, specialized shops dedicated to federally outlawed psychedelic fungi are suddenly springing up all over North America. The sudden burst of retail mushroom shops selling an illegal drug heralds a cultural and political shift in Americans' attitudes towards psychedelic mushrooms, which were banned in 1970 in the U.S. and in Canada in 1975. These shroom dispensaries cater to intrepid psychonauts, who wish to bravely explore the inner reaches of their psyche using mind-altering drugs, as well as to folks hoping to alleviate mental and physical suffering.

Mushroom shops operate in a legal gray area, not unlike cannabis dispensaries.

Functional fungi — that is, fungus with alleged health benefits — are increasingly the center of wellness trends. But some so-called "magic" mushrooms contain a drug called psilocybin, which is highly illegal in most places. That's slowly changing, however, following laws passed in Oregon, Colorado and Washington, D.C., plus more than a dozen cities across the U.S. that have decriminalized the naturally-occurring psychedelic mushroom, and sometimes other natural psychedelics as well.

However, the federal government considers psilocin and psilocybin, the active components in many psychedelic mushrooms, as having high potential for abuse and no medical benefits; hence, their possession and sale is illegal on a federal level. That means such mushroom shops operate in a legal gray area, not unlike cannabis dispensaries — which similarly take advantage of the patchwork of cannabis legalization laws in states, despite marijuana remaining illegal on a federal level.

While definitions vary, generally "decriminalized" just means there are little to no legal consequences for possessing these mushrooms. That does not mean it is legal to sell them or set up a shop or dispensary with a menu of products like a cannabis boutique. Yet it is happening anyway in more and more places across North America.

Canada has the largest share of shroom dispensaries, which are illegal, but operate in a sort of gray area as attempts to shut them down have been met with protest or disinterest from local government. Currently, eight Canadians are suing the government through a legal process known as a Charter challenge, aiming to secure access to psilocybin and psilocybin therapy. A similar process is what brought medical marijuana to the country, which later evolved into a robust adult-use market. Notably, adult-use marijuana legalization in Canada hasn't resulted in an increase in youth cannabis usage rates.

It's not a bad trip: Mushrooms may be "talking" to each other, new study finds

As the Charter challenge winds through the legal process, mushrooms dispensaries are operating out in the open. For example, a company called Shroomyz has two locations, one in Ottawa and the other in Toronto, both offering a wide selection of flavored edibles, tinctures or dried mushrooms. They even offer delivery, but customers must be over age 19, and first must visit the store in person and fill out a medical form requiring a photo ID.

In mid-November, Shroomyz was raided by the police, who arrested two men. But the city of Toronto later said they had no plans to shut down the store, and according to CBC, local police said there is no active investigation into the dispensary at this time.

The first store like this to open was The Mushroom Dispensary in Vancouver, B.C., that debuted in July 2019. It was founded by businessman and activist Dana Larsen, who also opened The Medicinal Cannabis Dispensary in 2007. Back then, medical marijuana wasn't legal, but eventually Larsen's act of civil disobedience led, in part, to the overturn of prohibition.

Hundreds of Portland, Oregon residents stood in line for hours in the cold, waiting to get into the newly opened Shroom House, which began cash-only sales on December 1st.

If you were to take any of these substances, it would trigger otherworldly feelings of time dilation, brighter colors and pleasantly distorted auditory feedback, visuals distortions like trails or tracers and geometric patterns that appear in objects. Inwardly, it can dissolve the boundaries between the self and the universe, an experience that, despite being called "ego death," can be quite pleasant and even spiritual. For some people, these experiences can be uncomfortable or even traumatizing, especially with high doses, but this can often be managed with proper set and setting.

The movement to legalize certain classes of psychedelics stems in part from a growing body of scientific research that suggests psychedelics can be helpful for relieving anxiety, depression, PTSD and even certain types of physical pain, but researchers are still establishing how effective these drugs can be.

Regardless, many people aren't going to wait for the Food and Drug Administration to approve these medicines. That's why on Sunday, hundreds of Portland, Oregon residents stood in line for hours in the cold, waiting to get into the newly opened Shroom House, which began cash only sales on December 1st. It was raided by police just seven days later, according to KOIN 6, but in just a week, it clearly served a lot of customers.

Oregon approved Measure 109 in 2020, a ballot measure that authorizes the Oregon Health Authority to license and regulate psilocybin products and service centers, which are slated to open sometime next year. No licenses have been awarded yet. But Oregonians won't be able to just buy a sack of mushrooms and go home. They must first meet with a licensed facilitator for a preparation session, then consume the product at the service center while they are monitored.

However, Measure 109 didn't authorize retail sales to the general public, so what Shroom House was doing isn't technically sanctioned. But local news stories of people waiting in line depict enthusiastic customers, eager to have access to psilocybin. The sudden attention may have contributed to the arrests of multiple people Thursday morning. Salon contacted the number on Shroom House's Google listing, which has many 5 star reviews, but we have yet to hear back.

It's not unheard of for mushroom dispensaries to be shut down with swarms of cops. In June 2019, after Oakland, California decriminalized naturally-occurring psychedelics, including psilocybin mushrooms, a religious organization called Zide Door began offering mushrooms and cannabis for sale, but only to members.

Zide Door calls its belief system Religious Evolution, which is sort of a rehabilitated take on the Stoned Ape Theory posited by famed psychonaut Terence McKenna. In short, the belief is that psilocybin mushrooms are responsible for the evolution of human consciousness and by taking these sacraments, you are reconnecting to God.

Yet apparently local authorities weren't believers. In August 2020, Oakland police raided Zide Door, seizing about $200,000 in cannabis, psilocybin mushrooms and cash, according to the Washington Post. No arrests or charges were made, but none of the sacraments were returned, either. Now Zide Door is suing the city, alleging that their civil liberties were violated.

Even Florida has a new shroom dispensary, though it serves a different kind of psychedelic mushroom. Chillum, a mushroom and hemp dispensary in Ybor City near Tampa Bay, sells grow kits, spores and mycology cultures for Amanita muscaria, the fly agaric mushroom. Most people recognize it as the iconic red-and-white fungus from Super Mario and Alice in Wonderland, and it actually can trigger hallucinations that feel like shrinking or growing.

A. muscaria mushrooms don't contain psilocybin, and they're actually not illegal federally or in most states, with Louisiana being the sole exception. But there aren't many businesses that are openly selling these psychedelic fungi, especially not with storefronts.

The main psychoactive chemical in these iconic shrooms is called muscimol and it's very different from psilocybin, acting on GABAA receptors instead of serotonin. Nonetheless, it's a pretty trippy experience and some folks consider fly agaric mushrooms to be just as magic.

Chillum is another example of how mushroom dispensaries are pushing legal boundaries. It's not outside the realm of possibility that such defiant business will attract the attention of conservative leaders in Florida, who aren't especially progressive on drug policy, even if it isn't technically illegal.

But while the legal status of these shops are in limbo, overall, it's a sign that times are changing faster than policymakers know how to respond. What's even more compelling than these openings is the extreme demand for psychedelic products. Given the steep rise in mental health problems over the last three years, coupled with the stark lack of access to effective medical care, many people are searching for alternatives.

Psychedelic mushrooms appear to work for some as alternative therapies. Yet the lack of regulation could open people up to harms from panic attacks or contaminated products, just like certain aspects of the underground cannabis industry. More sanctioned, regulated retail operations selling psychedelics have a chance to change that.

Update Dec. 8, 2022 11:30am PST: This story has been updated to reflect the fact that Shroom House was raided by Portland Police on December 8.