Our biggest problem isn't Trump or Biden: The media is disconnected from reality

After 38 years as a political reporter, here's my assessment of the current D.C. press corps: A flaming car wreck 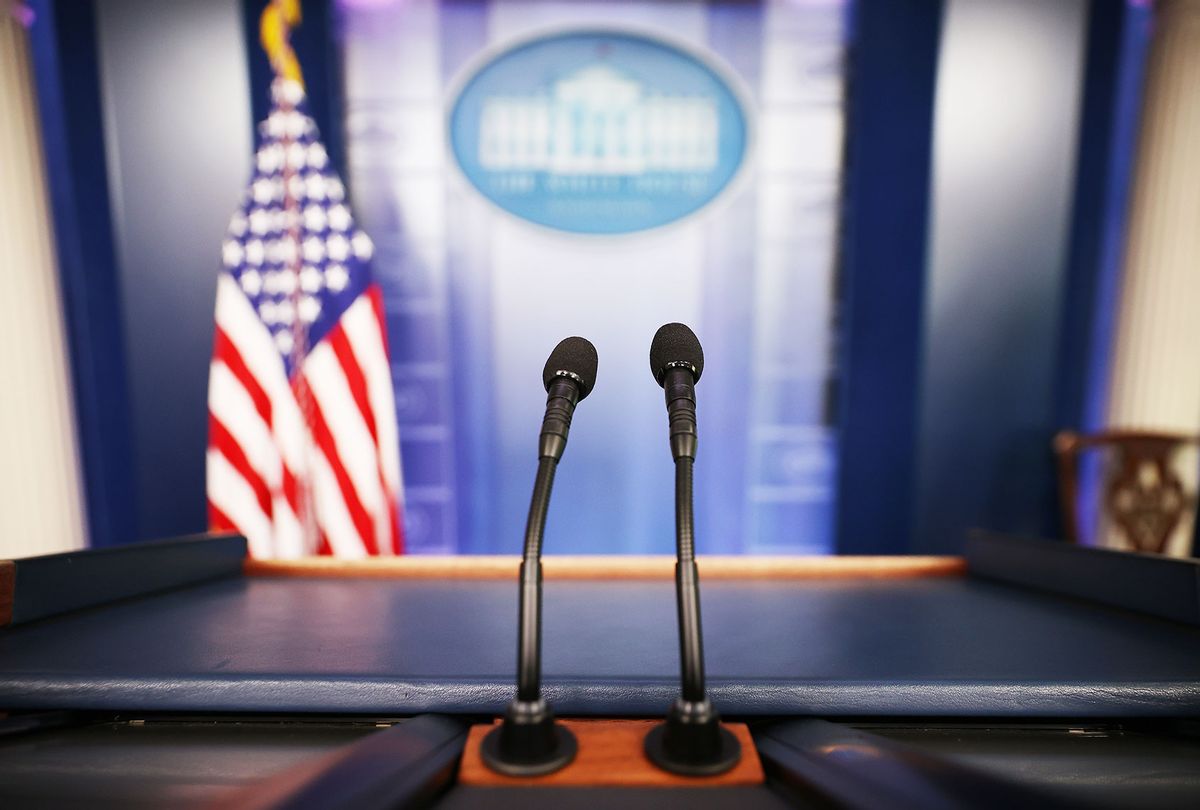 Close up of the podium in the James Brady Press Briefing Room at the White House in Washington, DC. (Chip Somodevilla/Getty Images)
--

On Wednesday morning, I found myself driving down I-270 from my comfortable suburban abode to get to the White House.

It's a trip I've made literally hundreds, if not thousands, of times. This time was different.

It was rainy and foggy, and as I approached the cutoff that led to I-495, I was cruising along at a comfortable 75 mph. It was faster than the speed limit, but was commensurate with traffic flow. As I glanced in my rearview mirror after putting on my turn signal to change into the right exit lane, I saw a white sports car approaching at a high rate of speed. He passed me on the right, almost hitting me, then cut me off, passed another car, cut him off, and then was gone. He passed me as if I were standing still, and I knew he had to be going in excess of 100 mph — way too fast for surface conditions.

"There's an accident waiting to happen," I said out loud over the sound of "Kashmir" by Led Zeppelin on my car's sound system.

Fifteen seconds later the driver who passed me hit the Jersey barrier dividing the lanes of traffic, and spun out after hitting another car, whose driver managed to drive into the access lane only slightly injured — although his car was totaled. The driver of the white sports car who caused the conflagration? His car too was obviously totaled. With plastic, glass and bits of metal beginning to litter all six lanes of traffic, everyone had to slow down. That allowed me to see the driver who had caused all the pain. As I passed within 10 feet of him, his car was smoking, apparently smoldering. He had a gash across his forehead. He was still trying to drive the thing, pushing to get it into an access lane. "Your car is on fire," I shouted. He ignored me.

As bad as that was, the White House on Wednesday was worse.

It isn't that Joe Biden did anything wrong. Well, he may have. But what reporters did in the briefing room was far worse than a high-speed car wreck on a crowded highway.

The Joe Biden reality show: Most stage-managed presidency in history keeps undermining itself

Let's recap the news of Wednesday morning, shall we? Sen. Raphael Warnock defeated Herschel Walker, thus giving the Democrats a definitive majority in the Senate next year. Ukraine bombed Russian assets deep in Russia. The Trump Organization was found guilty of tax fraud leading Donald Trump to throw his longtime accountant, Allen Weisselberg, under the bus. (No surprise there. Trump would throw everyone including his own children under the bus to save his hide.) The House Ethics Committee fined outgoing Rep. Madison Cawthorn, R-N.C., $15,000 over an improper promotion of cryptocurrency. We learned that Jared Kushner is now under  investigation by two congressional committees for "improperly influencing U.S. tax, trade and national security policies" to bail out his family's real estate business. A case being heard before the Supreme Court that would give state legislatures the de facto right to throw out election results was in the news. Rep. Alexandria Ocasio-Cortez, D-N.Y., it was announced, is also under investigation by the House Ethics Committee. Oh and, by the way, Thursday is the 42nd anniversary of the murder of John Lennon by a crazed lunatic with a gun.

All of those are important stories.

What did reporters discuss with each other after press secretary Karine Jean-Pierre conducted her daily briefing? They were consumed with learning why some reporters got invitations to the White House Christmas party while others did not.

Yes. You read that right. Talk about a fiery car wreck.

The general public may well have a hard time understanding why reporters are concerned about going to a White House Christmas party when most Americans have never  been to the White House. At the same time, as a reporter who wasn't invited, I'm far more concerned about the president showing up and taking questions from the press — which he rarely does — rather than being present for a quick "grip and grin" photo with him at a party. I'm not part of that crowd, and never want to pretend I am. I consider it a compliment that both the Democrats and Republicans apparently think so little of me that neither of them want me at their Christmas party. In short, I don't care. The only time I want my picture with a president is when I'm either interviewing one or getting them to answer a question in a news conference.

And while I agree with the sentiment that the White House is "our house" and anyone with a press pass should be able to go to the White House Christmas party, I still don't care. Sure, Biden comes off as condescending to the press. But so has every other president. Trump was far worse than that. At least no one has bashed my windshield in and threatened my life during this administration (knock on wood) so I'm less concerned about the president's disapproval. Has he been hypocritical about the press? Sure. On the campaign trail he promised retribution for the death of journalist Jamal Khashoggi at the hands of Saudi Arabia's rulers. After he was elected, he did nothing. That tells you all you need to know about most presidents, including Biden, and their attitude toward the free press. I don't care what the president thinks about me. He's a public employee. He works for me.

I just want him to show up and answer questions about what he's doing on the job.

And here's the question I still want answered from him after the Democrats picked up a seat in the Senate, but lost control of the House: "How can you look at the results of the midterm elections and call it a victory?" I've heard over and over that the midterm elections were a startling victory for the Democrats. But they lost the House — moreover, to a party that won't denounce the former president who recently called for the "termination" of the Constitution, a party that for the most part won't denounce the Jan. 6 insurrection and includes many officeholders who support the "Big Lie" about the November 2020 general election.

Mr. President, you lost to that? We are now, of course, relegated to two years of garbage about Hunter Biden's laptop, potential impeachment hearings of every Democrat who can be impeached, and endless, mindless criticism of the "evil" and "socialist" Democrats.

In Peru, the president was impeached and arrested after he attempted to dissolve Congress. In the United States? The Republicans who turned their heads away from an insurrection want Donald Trump back in office, while  the Democrats could not field enough viable candidates to keep those same anti-democratic forces in the Republican Party from taking control of the House.

How can Joe Biden look at an election where he lost the House to a party that won't denounce Trump or the Jan. 6 insurrection or the Big Lie, and call that a victory?

The White House has added to the car wreck by driving fast and playing loose with the press. Press briefings are mostly a joke. For example, the first 40 minutes of the briefing on Wednesday were dedicated to taking questions from just 12 people in the first two rows of the Brady Briefing Room. "I have a thousand questions," one reporter said. "Just ask two," shouted another reporter who rarely gets to ask questions. The Biden administration loves to rely on the reporters in the "pool," who have become so close to the president — by association — that they seldom rock the boat. They get access. They get attention. They get their egos stroked.

On Wednesday there were several questions about a proposed assault weapons ban that seemed to teeter into absurdity. After all, the Republican Party owns the House going forward and will never pass the type of legislation several reporters were intent on quizzing the administration about. It seems as if some of us have no idea how the legislative process works.

This came after a night of television news coverage of the Warnock-Walker runoff election in Georgia, during which some reporters and anchors overestimated Walker's chances of winning, while underestimating Warnock's. Reporters have long relegated themselves to covering the "horse race" aspect of politics, and now it is apparent we're horrible at handicapping the actual results.

There are many more examples of why the press fails us, and why we need to do better. But, since a well-informed electorate is vital to a democracy, that's all that really needs to be said.

Unless there is a fundamental paradigm shift in American journalism that allows for critical thinking, and unless media literacy becomes part of the curriculum in our public schools, there simply is no way to cure what is wrong with the American press — and that makes it nearly impossible to cure what is wrong with our democracy and, more to the point, that's why Trumpism will continue long after Donald Trump falls victim to the actuary tables.

As a reporter for the last 38 years, it is more horrifying to see what is happening to the press than to watch an idiot scream down the highway at alarmingly high speed, causing an accident.

Both are horrific. But a blind, ignorant, arrogant and self-absorbed press is far more dangerous.

from Brian Karem on Trump, Biden and America