The Joe Biden reality show: Most stage-managed presidency in history keeps undermining itself

Democrats are increasingly itchy about a president who seems isolated and disconnected. But what's the alternative? 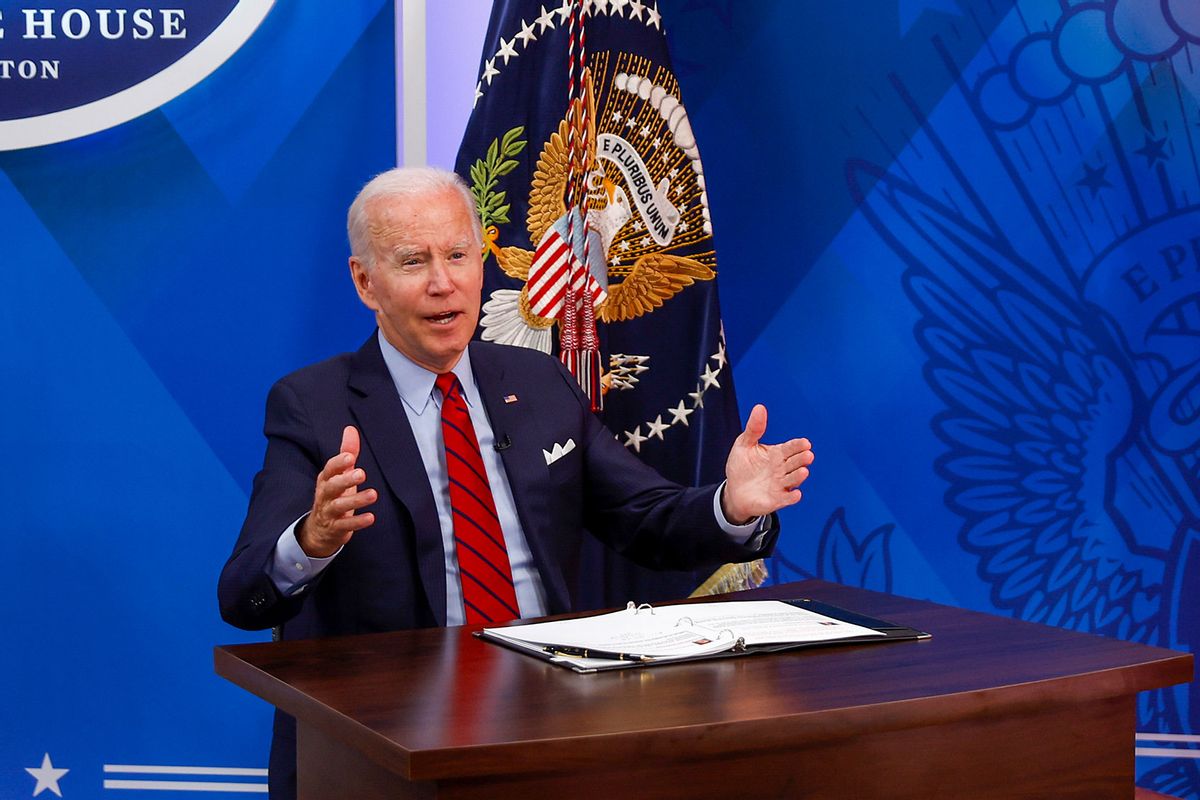 What a difference an administration makes.

Donald Trump had nothing to say and said it all the time.

President Joe Biden has more to say and rarely says it.

Or at least that's what a lot of his fellow Democrats seem to think.

Following the shooting in Highland Park, Illinois, on the Fourth of July, there is growing criticism from members of Biden's party, who accuse the president of not saying enough about this important issue. White House press secretary Karine Jean-Pierre says Biden has approached the continuing gun violence issue with "passion" and "fury." Some of his fellow Democrats, however, have reportedly begun to doubt both of those. Some of that criticism comes from Congress, where it is obvious they mistake "fury" for action. It would also explain why Congress often seems so furious and yet takes so little action.

Biden has done himself no favors because even the press (which, until recently, was still in a honeymoon with the White House) says he continuously hides from the public. He's had just one full news conference at the White House — during the pandemic, with relatively few reporters present — and he routinely avoids putting himself in situations where the press can ask him questions.

RELATED: Joe Biden is finding out that "better than Trump" is not nearly good enough

Donald Trump used the Oval Office as an interactive bully pulpit and battering ram — screaming and ranting and raving at the press while taking questions in a variety of venues that he believed gave him an advantage, whether in his infamous "chopper talk" sessions on the South Lawn, in pool sprays or elsewhere. Trump could make an ass of himself anywhere, always did and still does.

But today, the president of the United States is a role played by a septuagenarian in a reality show.

Or at least that's the way it seemed last Friday.

For the first time since January, I was given permission, along with perhaps two dozen other reporters, to walk into the South Court Auditorium and serve as a temporary audience during a presidential reality show episode. Of course, that's not how it was billed. But the auditorium has morphed into a Hollywood sound stage over the last 17 months. During previous administrations, the room was pressed into service as anything from an overflow work space to an auditorium hosting presidential press events. The first COVID briefings under Trump took place in that auditorium, before approximately 200 members of the press corps.

After getting a two-minute warning Friday, the president, bless his heart, showed up almost on time. That alone is refreshing to most reporters who are accustomed to a more fluid schedule when it comes to the leaders of our country. Biden walked in and, relatively unceremoniously, sat downstage right. He was at a desk, at a 45-degree angle to the audience and facing a backstage wall that served as a video screen for his call with Democratic governors following the Supreme Court's decision to  overturn Roe v. Wade. Ten minutes later, the press was ushered out. Who knows what happened next? If, for some strange reason, the nation had to rely on reports from the Washington press corps as to what happened, we'd be stumped. The reporters and photographers were gone. Apparently there was video. Thank God, right?

I swear, at one point I thought the president might turn, look at the audience and say, "We'll have more with irate governors after this important commercial message . . . "

Not one moment for questions from the press.

No real moment in which to interject one.

Completely scripted, down to the usher-like tones from the wranglers who whispered, "Time to go."

Trump called us the "enemy of the people" and "fake news." He personally insulted reporters. But he also mixed it up with questions, pro or con. Biden simply avoids the press. He's the most managed president in history.

If this had happened under Trump, he would have been late, combative and surly. He would have accused us at least once of being the "enemy of the people," called us "fake news" at least twice and might have personally insulted a reporter just for good measure. But he'd mix it up with questions, not caring if they were pro or con. He was ready to fight with anybody. That was Trump's game plan. After he got comfortable in any venue in the White House, he stayed and fouled the nest. At first, there was no chopper talk. Then, after trying it once and being invited back, he kept doing it. After he showed up in the Brady Briefing Room to discuss the pandemic, with a little more than a year left in his term of office, he was again invited back.

We couldn't get rid of him, in either venue, after that.

Maybe I shouldn't have invited him to stay?

The Biden administration is, of course, thank God, nothing like Trump's. But Biden's administration is also the most staged presidency in history. I mean, he literally has a soundstage. I couldn't ask a question on Friday. And the next time he was in front of the open press — on Wednesday afternoon, as he left for Ohio — there was also no opportunity to talk to him.

This time he pulled a trick I've seen other presidents pull in years past. The pool report put it this way: "POTUS, giving the pool a bit of a fake-out, exited via the East Wing garden (and not the traditional exit) at 12:21p.m. He waved but was too far from the pool to hear a few shouted questions, and didn't come over to chat."

If Biden is actually incapable of occasionally taking unscripted questions from a wide variety of journalists, then the Democrats should be looking hard for someone who can — though they should heed the warning of history and avoid creating a Kennedy vs. Carter moment, as in 1980, that divides the party and allows a demon seed like Ronald Reagan to fall through the cracks and take root. In short, if the Democrats are going to proceed without Biden, it has to be at his initiative, or at least appear to be so. (Wink, wink.) The Democrats definitely don't need a competitive primary season where the incumbent president is fighting for survival. But given that this is the Democratic Party, they might just do that.

On the other hand, if Biden is capable of taking unscripted questions and his staff won't let him, then he needs to look for different staff. Either way, the longer Biden remains disconnected from the public, the more room he gives the Republicans to maneuver — and let's face it, that's what the Republicans do best. They can't find their moral compass despite all the devout Catholics on the Supreme Court  (or maybe because of them), but they're well equipped to play dodgeball.

Meanwhile, the Biden White House is hamstringing itself with the press, for reasons that defy logic. It has instituted arbitrary press restrictions, whose motives are suspect and which hamper the administration's ability to get its own message out — especially to those who aren't exactly fans and thus have the greatest need to hear it.

If Biden is actually incapable of taking unscripted questions, Democrats should be looking for someone who can — although they fear a 1980-style Kennedy vs. Carter disaster.

"The continued inability of the White House to be candid and transparent about the selection process for reporters attending his remarks undermines President Biden's credibility when he says he is a defender of the First Amendment," I wrote in a letter signed by 70 other reporters and given to the Biden press office Friday. "The incongruity of these restrictions underscores the belief by many reporters that the administration seeks to limit access to the president by anyone outside of the pool, or anyone who might ask a question the administration doesn't want to answer."

"Let us be candid," I explained further. "Our job is not to be liked, nor is it to be concerned about whether or not you like what we ask. A reporter's ability to question the most powerful man in our government shouldn't be discretionary. The administration's continued efforts to limit access to the president cannot be defended. Any notion that space is 'limited' is not supported by the fact that every other president before Biden (including Trump) allowed full access to the very same spaces without making us fill out a request form prior to admittance."

To be blunt, I doubt any president's commitment to a true free press. It runs antithetical to the desires of any politician who runs for office. It has been my experience that most administrations are tolerant of a free press as long as we freely agree with them — and they dole out access accordingly.

Trump, on the other hand, was a reactionary who would strike out at friends as well as perceived foes, but always tried to destroy the free press by any means available. If he had thought of taking off a shoe and throwing it at us, he would probably have done it.

Today, however, there is some hope. Biden's new press secretary, Jean-Pierre, is both pragmatic and responsible, two words rarely or never used in combination to describe any press secretary of the Trump years. When I asked her during Tuesday's press briefing about the letter I wrote regarding press restrictions, she said the administration would work with us to provide greater access. "This is also a priority of ours," she assured us.

Meanwhile, where's the engine driving the Biden message? The North Lawn is unusually quiet these days, compared to what I've seen under previous administrations. No high-ranking White House officials are at the sticks. They're not out at the tents talking to press. None are willing to appear "live" from the White House. You almost never see a Biden staffer on the North Lawn. If the Biden administration doesn't lack energy, then what does it lack? People?

There simply is no comparison between Biden and Trump, and it's absurd even to raise the issue. Yet the Biden administration has brought such comparisons on itself, through its own inaction, and its limited interaction with the rest of the world. Trump is still out there, still ready to suck up every molecule of attention by any means possible. The world needs to hear a lot more of the Biden administration's sanity than of Trump's insanity — at least up to the point when Trump is indicted, convicted and jailed.

I mean, who's gonna care about him after that?

Read more from Brian Karem on Biden, Trump and America: