I remember watching over the wheeze of the machine, the relief of extraction, the way I lined up the little bottles 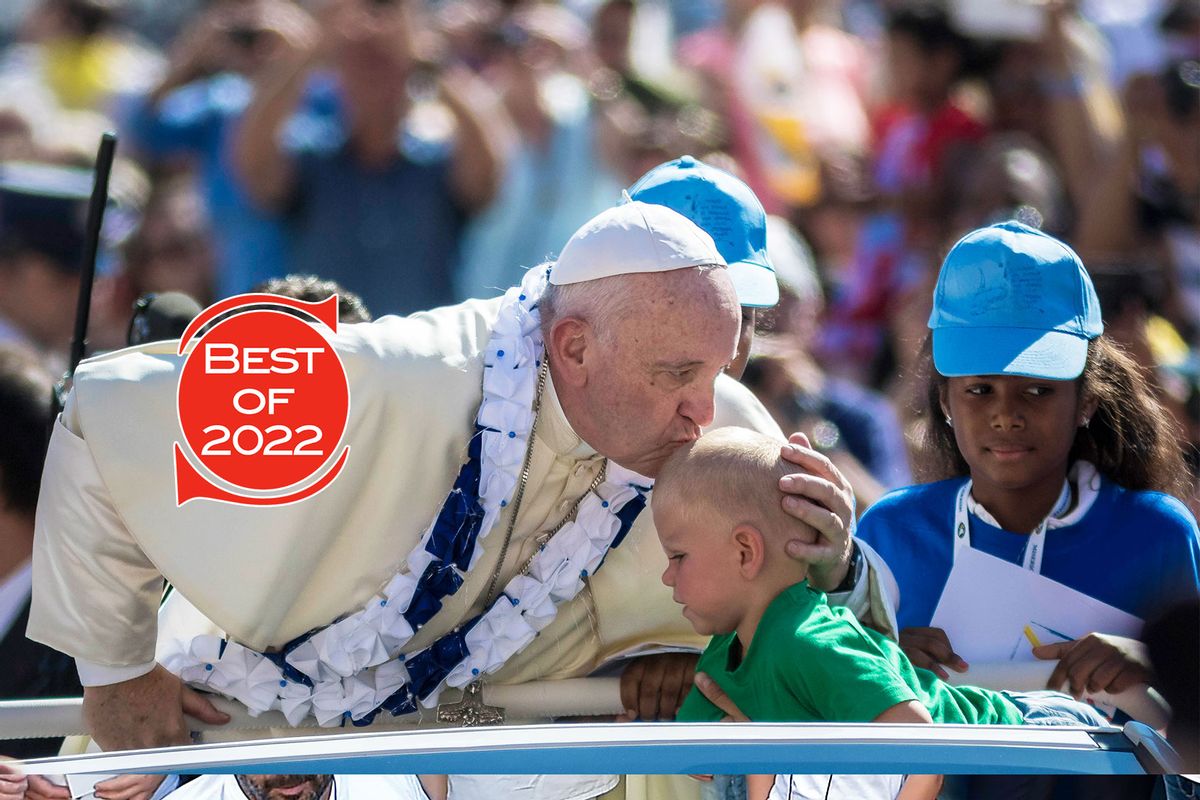 Pope Francis kisses a child as he arrives to celebrate an extraordinary Jubilee Audience for workers and volunteers of mercy, including nuns of the Missionary of Charity, the religious family founded by Mother Teresa in St. Peter's Square. (Salon/Giuseppe Ciccia/Pacific Press/LightRocket via Getty Images)
--

This essay was originally published in Salon on April 16, 2022. We're revisiting Salon's Best Life Stories of 2022 now through the end of the year. Read more Best of 2022.

A contraption sucked milk from my breasts while my newborn slept next to my hospital bed and the Pope canonized Mother Teresa on TV.

He must have bussed in people without housing from Milan, Bologna, Florence and Naples while my nipples filled with colostrum thick as mozzarella. In St. Peter's Square, he blessed the chefs who cooked pizzas over ovens set up in the streets.

The hungry were fed. My child, too, would be fed.

And so, earlier that day, nurses wheeled in a pump and told me to how to use it. I remember the wheeze of the machine, the relief of extraction, the way I lined up those little bottles with the yellow lids like an Aesop animal storing food for the winter.

One morning, I nearly slipped in the shower in shock when milk sprayed as if from a double-barreled squirt gun.

Weeks before labor, I would wake to cream beading on my nipples. One morning, I nearly slipped in the shower in shock when milk sprayed as if from a double-barreled squirt gun. Despite my readying body, I was surprised when my water broke the second day of a fall semester when I was supposed to be teaching college students how to form thesis statements.

In high school, I'd written a paper on Mother Teresa the year before she died, the year before I learned to give myself an orgasm. I was striving to be selfless, to feed the hungry, to French kiss and grope for ardency without baring my breasts.

Mother Teresa believed that every life mattered, and, as a teenager, I wanted to believe it too. Put me on a plane to India, I prayed. Let me never wish against pregnancy.

Mother Teresa hated birth control. My mother placed me on it when I was 14. She said it was to regulate my periods. I think it was in case I slipped, in case sex struck me dumb and hungry.

The doctors called me "geriatric" for getting pregnant in my late thirties. Mother Teresa might've been glad if I'd become a teen mother instead. At least then, ecstasy would have been for a purpose. I wouldn't have thrusted and trembled and clung for the sake of ended possibilities.

On the hospital TV a cadre of chefs fired up wood stoves on the cobblestones, and I gave my partner a withering look. He saw the brash machine slurping my skin and cringed. We made a pact then: He would change diapers — as many as possible over the baby and toddler years — and I would stretch and strain my body for this child.

We had been in love for over a decade, and for most of that time had decided not to have children. I'd take meandering train trips to Southern Virginia or Quebec City to visit friends and write to the lull of the rails. He'd jet set to photograph destination weddings and current events. We'd meet in between the bustle for crossword puzzles and long, naked mornings.

When the Pope came to Philadelphia a year before our son was born, my partner found himself with a press badge and a spot on the tarmac. Always amiable, he chatted with the local high school band director, who had decided at the last minute to bring along his entire family to catch a glimpse of the Pope, including his son Michael, who lived with severe cerebral palsy.

The Pope greeted the crowd from afar, then boarded his Fiat and began to speed away. Most of the press stayed behind, but my husband followed on foot. Suddenly, the Fiat stopped. The Pope emerged, a hair's breadth from my partner, where he reached out to Michael and touched his forehead, holding his palm there, skin to skin.

My husband captured the photograph of that blessing, and it went viral.

Three months later, we'd stand in the hallway of our home, gazing unbelievingly at the stick, and we'd weep, anticipating what we hadn't even known we'd wanted.

But before all that — before news outlets called and friends sent us clippings, before we had dinner with Michael's family and learned that they'd adopted all three of their children, Michael being the twin that the agency said they "didn't have to take if they didn't want to" — my husband climbed into the press bus and wept. And then called me and wept, telling me the story, telling me how close he'd gotten to holy.

Three months later, we'd stand in the hallway of our home, gazing unbelievingly at the stick, and we'd weep, anticipating what we hadn't even known we'd wanted.

Now, as the nurses changed shifts, dazzling pizza ovens packed the piazza. I could almost taste the dough, yeasty and full like afterbirth. 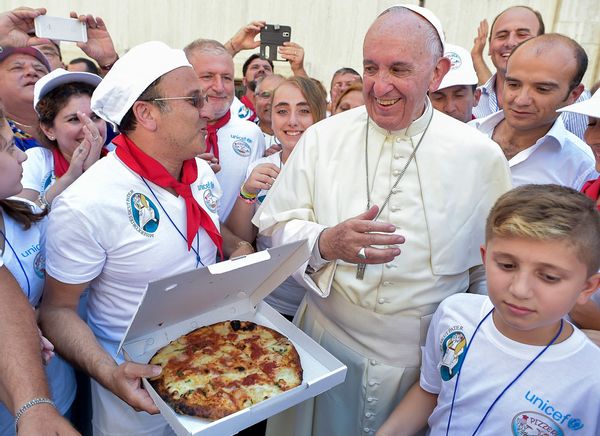 Pope Francis Invited 1500 Homeless People to a Pizza Party to Celebrate Mother Teresa at the Vatican on September 5, 2016. (MAURIX/Gamma-Rapho via Getty Images)

Our son was born five weeks early. The nurses said maybe it was Hurricane Hermine, creeping up the Eastern seaboard with its drop in barometric pressure. Maybe it was the soft orgasm I'd given myself the night before to relax my strained body that had tensed into sciatica. Maybe it was the breast milk, already eager to nourish.

But born our child was, ahead of schedule, and we were left to accept our new reality far sooner than expected. Friends put together our crib. Others installed a car seat. Someone brought home the baby blanket to the family dogs so that they could get used to the infant's scent. And, of course, people delivered food.

Maybe this is why Mother Teresa was canonized — not for a chaste space of absence but for the places of satiation she created where famished people gather around pizza ovens, crib assembly instructions and ragged nipples.

essays about pregnancy and motherhood

Rebecca Lauren is a poet and essayist living in Philadelphia, where she serves as managing editor of Saturnalia Books. Her writing has appeared in Prairie Schooner, The Journal of Feminist Studies in Religion and The Cincinnati Review.