Looking ahead: Top food and agriculture stories for 2023

There’s a great need for change, change that large institutions will likely fight 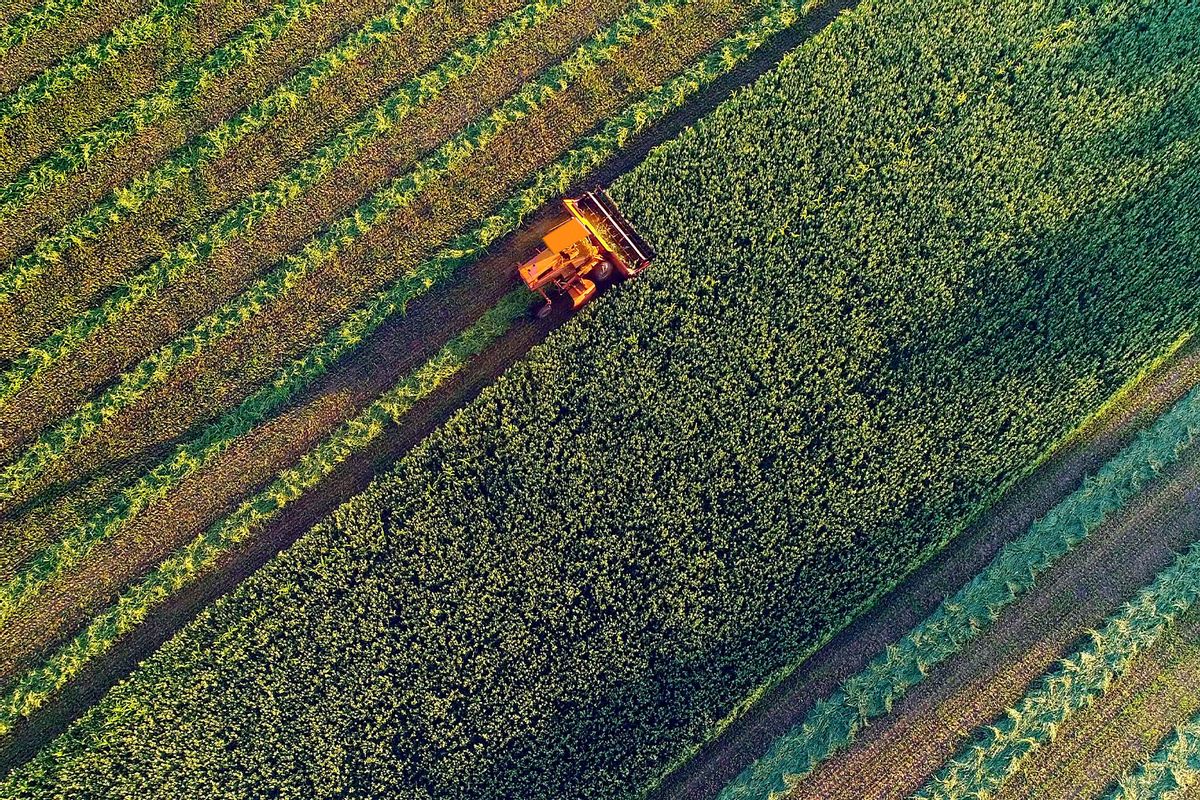 Every year at FoodPrint we look back on the big events in the world of food and agriculture and try to predict what might happen in the year ahead. This past year was an eventful and turbulent one, with soaring inflation, war in Ukraine and continued climate mayhem, none of which makes guessing what might come next any easier. Many of our predictions are bleak, about bad situations probably becoming worse. How we as a nation respond is where the variables lie: there's a great need for change, change that large institutions will likely fight. But we maintain a sliver of hope that these dire situations could be the wakeup call policymakers and corporations need as we head into 2023.

The Farm Bill Will Bring Fights over Nutrition Policy, Climate Change to the Forefront

Between a pandemic, a global recession and a new administration in the White House, it's been a couple of years of big changes in the world of food policy. 2023 brings an opportunity to get some recent temporary nutrition and climate provisions codified into more long-term policy through the reauthorization of the Farm Bill, the country's most significant piece of food and agriculture legislation. The bill needs to be reauthorized every 5 years, making it one of the bigger legislative items of the upcoming year. But with a divided House and Senate and so much on the table, it may be a more contentious cycle than usual. Conservative lawmakers have already expressed their opposition to adding more climate legislation into the Farm Bill. They've also made cutting funding to SNAP and other nutrition assistance programs — the largest component of the Farm Bill — a priority, setting themselves in opposition to their Democratic colleagues and the administration, which have pledged support for climate programs in particular. The Farm Bill ultimately supports far too many subsidy and assistance programs for lawmakers to allow it to go unsettled, so compromise is usually the name of the game. But what does this mean for these critical provisions?

We predict that the 2023 Farm Bill will go forward with fewer changes and additions than activists would like, thanks to these limitations. This means that it will be down to the administration to keep up support for on-farm climate initiatives through the USDA, along with little forward motion on expanding hunger programs, ultimately leaving some of the most important changes to climate and nutrition policy in the hands of the USDA and state agencies.

Food Prices Will Stabilize But Still Be Expensive

Inflation in every sector of the economy rocked U.S. households this year, but nowhere was it more evident than in food, where the cost increases were both more substantial and more lasting. Even as prices for gas and other goods have returned to more normal levels, food prices in U.S. grocery stores have remained relatively high. In spite of this, many food and grocery companies have posted record profits, indicating that some of the price changes we've seen have more to do with greed than they do with the economy itself.

Inflation is already on the decline heading into 2023, and globally, food prices are finally returning to more normal levels. But this might not translate into relief at the grocery store checkout line. The proposed merger between Kroger and Albertsons could create an even larger mega-chain in an already consolidated industry where size makes price manipulation much easier, as well as creating new food deserts in areas where the chain cuts out newly "redundant" or unprofitable stores. And while the administration has made some steps to help relieve consolidation in the meat industry, it'll be a while before any of those changes add up to changing prices on store shelves. All together, the industry's inertia, along with the growing likelihood of global recession means that even if inflation technically lets up, food prices will still feel high to most of us.

Western States Will Get Drier

High snowfall in some previously parched areas towards the end of 2021 gave people hope, but the rest of 2022 saw the continuation of the worst drought the West has seen in over 1200 years. With lakes, rivers and reservoirs approaching record low levels, farmers were in a scramble over how to get the water they needed, andpeople in some agricultural areas like California's Central Valley were left without safe drinking water. For farmers who couldn't access groundwater, expensive water bills left them with few options but to leave fields fallow, which made a big dent in the yield of water intensive crops like rice. With surface water in lakes and rivers at such a premium, farmers and ranchers were often in conflict with conservationists and regulators who had to reserve some resources for wildlife. Consolidation of farms and instability in water management organizations only compounded these problems.

With no end to the drought in sight, the next few growing seasons are going to be a time of difficult transitions for states like California and Arizona. As changing precipitation patterns make old water infrastructure unreliable, farmers will have to make more and more tough choices about whether or not they keep growing profitable but water-hungry crops like almonds and alfalfa (acreage of almonds shrank last year for the first time). In 2023, we predict that conservation methods like cover cropping on farms and orchards, along with other regenerative land management techniques, will continue to gain ground as farmers try to adapt to drier conditions.

Bird Flu will Prompt a Biosecurity Reckoning for Factory Farms

This year's bird flu outbreak has already surpassed 2015's in terms of mortality, with more than 53 million birds affected so far. Egg-laying flocks have been hit the hardest, but the flu has killed birds or forced farmers to cull flocks in 48 states (using cruel techniques like ventilation shutdown), seriously disrupting egg and poultry supplies while also infecting wild migratory birds. While the current outbreak hasn't passed into humans so far, it still presents serious questions about ethics and biosecurity on factory farms.

As the outbreak continues next year, the industry is likely to keep lobbying to use cruel culling techniques, simply because other methods are too costly.  But opposition from policymakers — including the recently introduced Transparency in Depopulation Act  — could put that on hold.

The fact that this outbreak persisted after the summer (most other bird flu outbreaks in the U.S. have been seasonally limited), suggests this flu could become endemic, leaving poultry farmers reliant on slower culling methods and forcing them to think more seriously about vaccinating birds and taking other measures to reduce spread. Eliminating factory farms, where crowded conditions serve as ideal amplification points for pathogens, could go a long way toward cutting the risks of bird flu and other diseases, but it's more likely that the industry will continue business as usual while the risks of another zoonotic pandemic climb.

This time last year we predicted that the government would continue to try to rein in meat companies and we were right. Last spring, Senators Booker, Tester, Merkley and Warren introduced a bill that would impose a moratorium on large agribusiness mergers. Around the same time, the Biden administration announced plans to make the poultry industry fairer with a set of mandatory disclosures for poultry processors, aiming to reduce exploitation of contract chicken growers. Those efforts were joined by continued legal battles (many unsuccessful) in price gouging cases against consolidated meatpackers, representing one of the broadest pushes for antitrust enforcement in recent decades.

The administration is still interested in pursuing antitrust action, but they may find some roadblocks. After several Department of Justice-prosecuted cases lost in court, there's some doubt over whether or not they'll be able to block big mergers — like Kroger and Albertsons — from going forward. Still, some recently-implemented changes, like the new rules for the poultry industry and investments in alternative meat processing facilities take effect, a few of the food system's most tightly consolidated sectors may start to become slightly more competitive and fair.

For the past two years there was a mainstream belief that plant-based meat alternatives — fake meat products from companies like Beyond and Impossible and sub-brands from giant meat conglomerates — would help us move away from our addiction to cheap meat and its huge carbon footprint.

In our 2021 FoodPrint of Fake Meat report we stated similar concerns, and while it does not feel good to be right about this, we will be glad to see reality take root sooner rather than later.

The ever-growing number of vegans and vegetarians in the U.S. means that plant-based eating will continue to be popular. Happily, there are plenty of other options, including delicious homemade bean burgers. And what about cell-based, lab-grown meat? While there was an unexpected FDA approval of one product this year, there are enough commercial hurdles in place to suggest it probably won't be available commercially in 2023.

Big Food Companies Will Not Take Labor Wins Lying Down

The year started out with some encouraging progress for food worker unions, especially in chains that have historically had a very hard time unionizing like Starbucks and Chipotle. But while union votes picked up a lot of steam, companies fought back hard, going so far as to shut down locations where union activity had taken place. These retaliatory moves have slowed down the speed of unionization at some workplaces.

Still, there's reason to be optimistic about unionization efforts in the food system moving forward: California recently established a Fast Food Council where workers will have a say in determining minimum wage for the industry. After a long march to Sacramento and some public pressure on the governor, farmworkers in California secured the right to vote by mail for unionization, a much-needed protection after a Supreme Court case last year seriously limited what actions labor organizers were allowed to take on farms, which have historically been holdouts against unionization. There's also the recent National Labor Review Board decision that companies that illegally fire or demote unionizing workers can be held financially responsible for workers' resulting financial issues like credit card late fees or lost housing. These gains won't translate immediately into material changes for most workers, but they still affirm workers' right and ability to organize.

The Slow Fight Against Plastics Manufacturers Will Grind On

As discussed in our recent episode on plastic food packaging, California joined Maine, Oregon and Massachusetts in passing an Extended Producer Responsibility (EPR) law, which shifts the responsibility for plastic recycling and disposal back to producers that use plastic packaging and away from consumers and municipalities. By taxing manufacturers of food and other packaged goods according to type and amount of plastic they use and funneling that money back into recycling infrastructure, these efforts help provide a big incentive for companies to actually use less plastic rather than putting the onus on individuals to recycle properly and/or reduce their individual consumption.

California's law also includes provisions that mandate shifts away from non-recyclable or compostable plastic, with the eventual goal of complete elimination. This and similar bills take time to go into effect, but as more and more state legislatures look at similar provisions, it'll likely force changes to the plastic industry overall. At a federal level, changes will be harder, but with Senators like Oregon's Jeff Merkley leading hearings on how to reduce plastic production nationwide, there's some momentum to get federal policy on board with basic plastic reduction strategies like EPR.