Why do I say we should defund the police? My lived experience 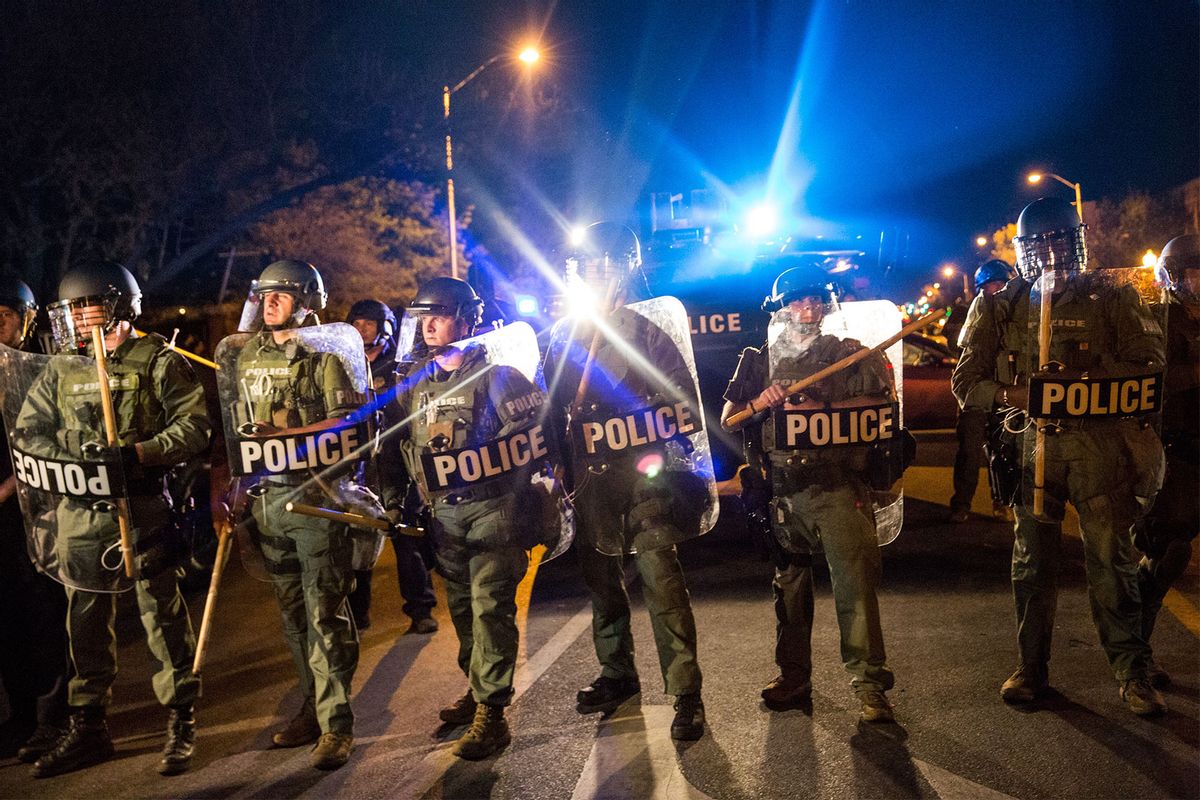 Riot police monitor protesters near a CVS pharmacy that was looted and burned by rioters on Monday after the funeral of Freddie Gray, on April 29, 2015 in Baltimore, Maryland. (Andrew Burton/Getty Images)
--

Earlier this week, I learned via social media that there is a national day of appreciation for law enforcement set aside in January of every year. One clip that went around showed Dean Cain, former Superman and current Fox News favorite, gushing about cops to "Fox & Friends."

"Every single day should be Law Enforcement Appreciation Day," said Cain, who now serves as both a reserve police officer in Pocatello, Idaho, and a deputy sheriff in Frederick County, Virginia.

Did "defund the police" lead to an increase in murder? Almost certainly not

Anger wells up inside of me at the idea of celebrating cops just for the sake of celebrating cops. Read the room, America. You've heard of Mike Brown, Tamir Rice, Freddie Gray? Breonna Taylor, Sandra Bland, George Floyd? Is there no internet in Pocatello? Should we be celebrating cops before we designate a National Hand Sanitizer Bottler Day? Because those folks are real heroes.

This is normally the part where a person with a different lived experience would step in and say something like, You guys who complain about the cops always call the cops when you are in trouble!

Well, I don't. As a child, when armed gunmen stormed my home, held my family hostage and stole our belongings, my dad called the police after they fled, only to be greeted by two cops who showed up hours late with terrible attitudes. That incident was followed by years of cops digging in our pockets and stealing my money, chasing and beating on my friends and me; cops who booked us for stats, the countless traffic tickets for DWB (Driving While Black); the times they made us lie face-down on cold concrete just because they could, the years of senseless trash talk; the brave officers who fixed their lips to call us "Black ass n****rs," and "Jungle n****rs"; and one particular, pale Baltimore City cop who dragged his chunky index finger slowly across his neck, calling me a "dead n****r."

Some cops can't wait to wreak havoc on a peaceful block, but never show up during shoot-outs like real heroes would.

For the most part, the Black inner-city male experience teaches you to never call the cops unless you need to make an insurance claim. But I've even had bad experiences with police officers doing just that, as if I scam because I'm Black, not worthy to make a complaint so I can be reimbursed for my money because I'm Black, fractured my own windshield or punctured my own tires because I'm Black. And still, to be greeted with sourness — even from cops who are as Black as me. How or why should anyone celebrate an institution like that?

"The Baltimore Police department does a wonderful job," I overheard a poshly-dressed woman say in a fancy Baltimore bar a few months ago. She wasn't talking to me or trying to get my attention, and I wasn't actively eavesdropping, even though her comments burned the side of my face. "I'm thinking about documenting the horrors cops face in this city in my next book."

As a Baltimore writer, I like to know who the other Baltimore writers are, and I'd never seen this woman before. Her friends high-fived her, as she continued praising city cops and the newly elected States Attorney Ivan Bates. We had just passed 300 murders, and I don't think that number warranted a celebration. Especially since one of those murders was my friend Heavy, a good dude who was abducted in broad daylight under what seemed like multiple modes of police surveillance. No one saved him.

"Two writers at one bar?" the bartender said to the woman, pointing at me. "Do you know D Watkins?"

"Actually, no," the woman responded. "Nice to meet you. Are you a poet?"

"I wish," I laughed, holding my glass up in a cheers motion, and then quickly went back to minding my business. That didn't last long because this was the part when the "where are you from" and "what do you think about the hard-working cops, the mayor, the future of the city" part of the conversation began.

I told her I didn't have any faith in cops without going into my backstory. I didn't explain how you could hit me with a car, push me through a glass window, stick a gun in my face or even shoot at me  — all those things have actually happened — and I still couldn't bring myself to dial 9-1-1 because police always, always make situations worse.

Instead, I landed on this: "I'd never call a cop. Well, except for insurance paperwork. Insurance companies require a police report."

"That's ridiculous. I'll call the cops in a second," she said. Her eagerness made the bar, her friends, and even me laugh. I couldn't hold it in.

You'd even call them on me, I mumbled under my breath, before taking myself out of the conversation for good.

I'm sure a cop has saved someone at some point, but that hasn't been my lived experience. I understand that my lived experience isn't the same as everyone's, just like I understand that all cops aren't out in the world working toward my destruction. I grew up in a poor neighborhood where N-word-spewing cops regularly acted out without repercussions. Now I live in a middle-class neighborhood where cops wave and tell us to enjoy our weekends. Everyone in my old neighborhood wasn't a criminal. And I know not everyone in my new neighborhood is a saint. However, our class allows us to have a different experience with law enforcement. And we need to change that.

Changing the mentality that police officers take into poor Black neighborhoods is way more important than creating a holiday in celebration of bad-to-mediocre service for most of the country via a failed institution that we are all forced to pay for. Instead of being so quick to aimlessly celebrate or honor the police, let's put that energy into making policing work for all. Defunding and reallocating those funds to some of the poor communities cops helped destroy would be a great start.

about defunding the police