Of course even Taylor Swift’s cats are capitalists

It's bizarre how conditioned we are to spend money on Swift. Could the future be feline? 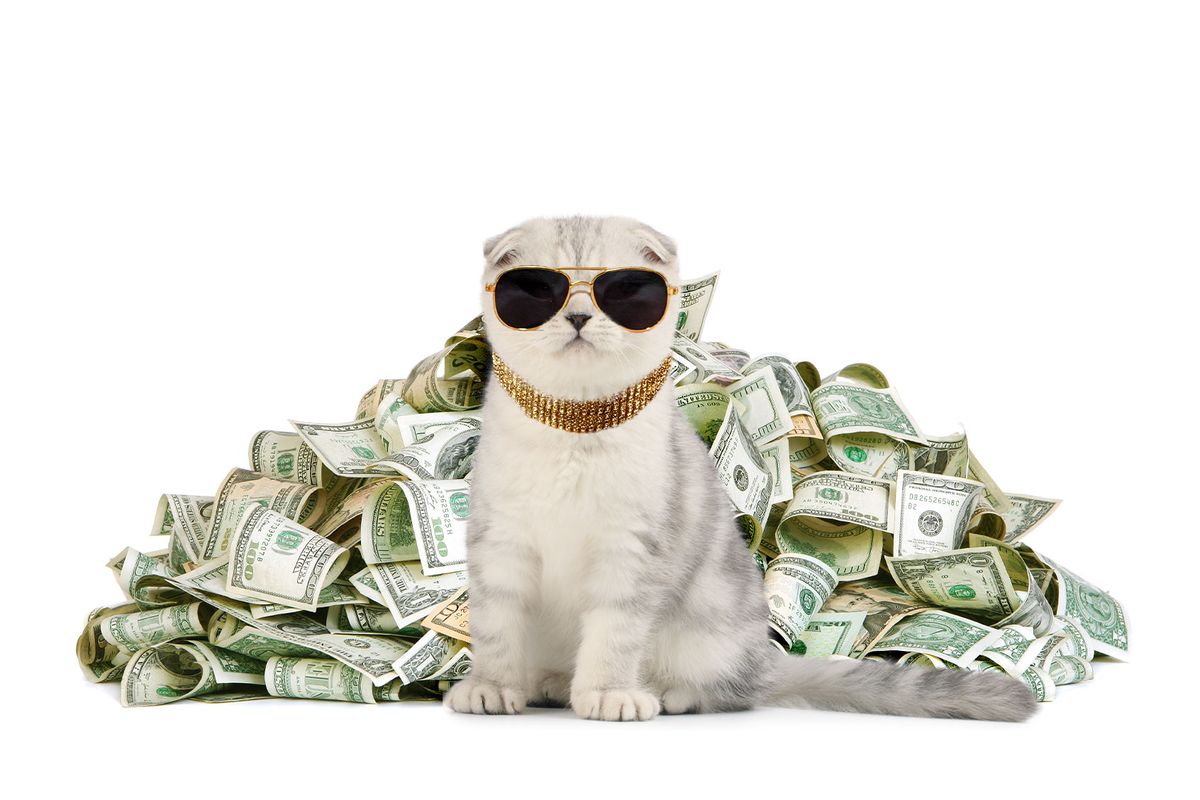 One thing Taylor Swift and I have in common is that we are obsessed with our cats. Swift even played one in "Cats," a movie that we're still trying to recover from as a society. The main difference in our cat obsession is that hers are worth nearly $100 million. According to a recent report from All About Cats, Swift's Scottish fold Olivia Benson is worth $97 million, which she earned from appearing in music videos and commercials with her owner, making her the third richest pet in the world. Until a few days ago, I didn't know that animals could accumulate wealth, but as a lifelong Swiftie, it comes as no surprise that Swift is the mother of the feline 1%. That's just who she is.

Taylor Swift is one of the most successful artists ever for many reasons, with her talent and songwriting abilities being paramount. But, as the first person set to become a billionaire with music as their primary source of income, Swift is more than the woman who consistently writes songs that make me cry. She's a savvy businesswoman, whose girlboss version of feminism is sometimes too much for those who love her most.

November's Ticketmaster meltdown is an obvious example. When fans skipped school and sat in hours-long virtual waiting rooms to spend hundreds of dollars on nosebleed tickets to her Eras Tour (if they got tickets at all), Swift responded as though she wasn't partly responsible for the chaos. Following a disastrous presale and canceled general sale due to "insufficient remaining ticket inventory," Swift posted a statement comparing the experience of buying tickets to her show to going through "several bear attacks." Between bots, ticket resellers and the sheer demand for her first tour in five years, it's not fair to blame Swift for everything that went wrong. However, decisions like using dynamic pricing (a Ticketmaster feature that increases prices from face value based on demand) during a Verified Fan presale is just one example of Swift asking fans to dole out a lot of cash to someone who already has plenty.

"When my other favorite artists release a new album, all I do is open up Spotify the next morning, but somehow Swift has me staying up until midnight, credit card in hand."

It's the Eras Tour that is expected to bring Swift to billionaire status. Forbes estimates that she has a net worth of $570 million and predicts that she could make as much as $620 million from the tour between ticket and merchandise sales. It's not like she doesn't work hard; the tour is 52 stops, and she has released five albums since 2020, all of which broke multiple records. But, if there's one thing I learned from years of following everything Swift's said and done, it's that she doesn't like being treated differently or held to unfair standards. The "there's no such thing as an ethical billionaire" rule should apply to her too.

There is a Taylor Swift song that makes me cringe every time I hear it, especially in the context of her net worth. Despite the fact that "The Man" is an upbeat, catchy song perfect for my running playlist, it's also the epitome of the problem I run into with my favorite artist. At first listen, it's her response to the years of sexism she faced from the fixation on her dating life to the trivialization of her music to her bad-faith portrayal in the media. It tells the classic story of how much harder women need to work in order to become successful and builds to the crushing question, "When everyone believes ya / What's that like?"

This girl power anthem, though, also reveals her capitalist fantasies. The song is about double standards, mostly about how they pertain to Swift not being able to enjoy her money and success like a man can. She tells us, "If I was a man, then I'd be the man," and she's right, but becoming like the men who got us into all this in the first place shouldn't be the goal. Therein lies the cringe: a song that gets credit for speaking against the patriarchy while also daydreaming about becoming part of it. Furthermore, when Swift sings about female empowerment, she sings about only herself — and making a lot of money.

I'll give Taylor the credit she's asking for: no one knows how to make money better than she does. In the Taylor Swift fandom, it's become a standard practice to buy multiple versions of one album. Generally, there's the regular version, the deluxe version, the Target version(s), and multiple colors of the same vinyl. We're led to believe that some of these are limited editions, creating a sense of scarcity, or in our terms, FOMO. Then, there are singles and remixes only available for purchase on her site, with no mention of if or when it'll turn up on a streaming service forcing fans to hit "add to cart" to find them uploaded to Spotify weeks later.

Swift's techniques had become a bit of a joke with her newest album "Midnights," which became the first album to occupy all 10 spots of the Billboard Hot 100 at once. Swift released four vinyl variations for this album that can be assembled to look like a clock. In order to do this, you'd need to spend $29.99 on each vinyl, plus an extra $49.99 on a Taylor Swift branded wall mount that comes with battery-powered clock hands. This clock is the definition of unnecessary, but it functions to sell the same album to one person four times. Swift also surprise-released a deluxe version of "Midnights" a mere few hours after the regular version, meaning that everyone who pre-ordered the original but would have wanted the deluxe just had to pay for a second album.

"It comes as no surprise that Swift is the mother of the feline 1%. That's just who she is."

Swift has been using tactics like this for years; when she released "Lover" in 2019, she released four different versions at Target that had different posters and journal entries inside. And, amid all the Eras Tour chaos, fans speculated that buying merch from her website would increase their odds of getting a "boost" to buy tickets, something that probably came from the days when buying merch or streaming her videos literally did give them an advantage toward tickets to the Reputation Tour. This only worked if you bought official merch, of course. In 2015, Swift cracked down on the fan-made kind, sending cease and desist letters to Etsy store owners selling apparel with lyrics and phrases that she trademarked. It's bizarre how conditioned we are to spend money on Swift. I've grown used to the frequent emails from her store announcing new "limited" collections, and oftentimes, I open them, just in case. When my other favorite artists release a new album, all I do is open up Spotify the next morning, but somehow Swift has me staying up until midnight, credit card in hand.

Whatever she's doing, it's working. "Midnights" became the world's most-streamed album in 24 hours with 184.6 million streams. This broke her record (and de-gendered the superlative) from her last release "Red (Taylor's Version)," which broke the record for most streams in a day for a female artist that was previously held by another one of her recent releases "folklore." She's on track to become a billionaire, one that's self-made and the first to have done it through music — of any gender. She has the private jet carbon emissions to prove it. And yes, even her cat is filthy rich.

Sitting on $1 billion isn't a feminist success, it's a policy failure, and a pretty good sign that someone has been underpaid or exploited. The cat of a billionaire having millions of dollars is also pretty tragic, but the world is feline Olivia Benson's oyster. Maybe she'll start a line of cat carrier backpacks perfect for joining your owner on tour or become an influencer like the other rich pets on the list. Maybe she'll go full nepo baby and become a pop star. Based on who her mother is, I can't say that I wouldn't listen. Taylor Swift's music is brilliant and fun and insightful and means more to me than I could ever explain, but the label "billionaire" doesn't make me proud. In this case, it is exhausting rooting for the anti-hero.

Olivia Luppino is a producer at Salon. Previously, she wrote about culture, fashion and lifestyle for The Cut and Popsugar.