I tried Reddit's viral, creamy, tortellini-packed "The Soup" — and it was totally worth it

While many recipes that garner lots of online attention are overhyped, this tomato-based soup doesn't disappoint 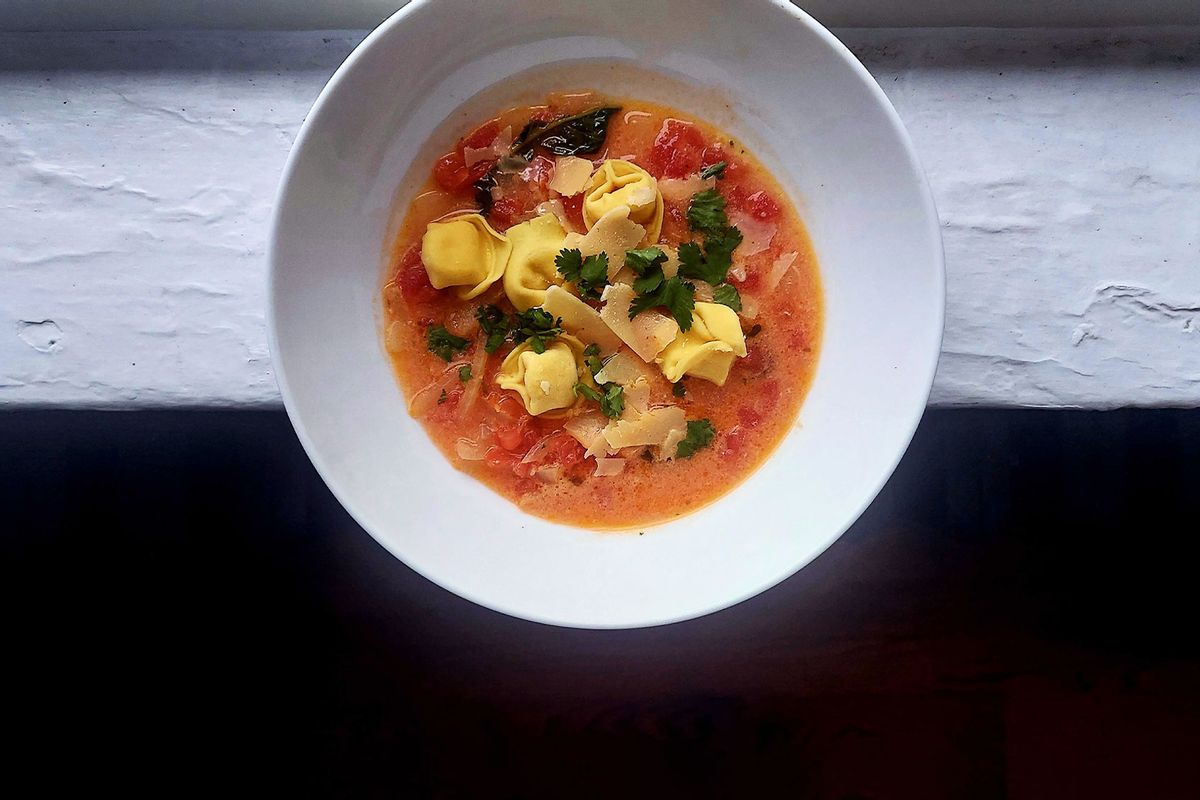 The past few years have brought us several viral soups. There was New Yorker writer Helen Rosner's "Roberto," a soup that she developed now nine or ten years ago, made by "sautéing some onion and garlic with a few links of spicy Italian sausage, dumping in a can of white beans and a can of crushed tomatoes, adding a few cups of chicken stock, and stirring in a fistful of torn kale."

"The result was good, but not quite good enough, so in went a flurry of grated Parmesan, for savory depth, and a shower of lemon juice, to lend some tart, shimmery brightness," Rosner wrote for the New Yorker in January 2020. "Almost no individual element of this was original—beans and greens have been the stuff of dinner since beans and greens began—and yet the gestalt had something to it, something unexpectedly right."

Rosner initially wrote about Roberto in a personal newsletter that only went out to a few hundred subscribers, but amid the pandemic, as more and more of us were cooking at home and documenting that effort, Roberto gained worldwide popularity thanks to soup fans making and sharing their riffs on the versatile recipe.

Several months later, Alison Roman's internet-famous New York Time's recipe for Spiced Chickpea Stew With Coconut and Turmeric (which some argued was actually a curry and should have been labeled as such as a deserved acknowledgement of culinary traditions that aren't Roman's own) went viral yet again thanks to its usage of pantry staples like coconut milk and canned chickpeas.

"The Stew" became shorthand for the recipe; now, when you search #TheStew on Instagram, you'll be presented with nearly 10,000 nearly identical images of bowls filled with golden-yellow chickpeas topped with dollops of creamy yogurt and chopped cilantro.

While some recipes that have seen surging popularity on social media aren't necessarily worth the hype (like, ahem, Mississippi pot roast), most soups are very good for the reason that both Rosner and Roman's recipes are objectively very good: the right combination of ingredients becomes so much greater than the sum of their parts with just a little heat and time.

That's why I have to admit I was pretty optimistic about trying yet another viral soup — a tortellini and tomato-packed number that has now been ceremoniously dubbed "The Soup" by Reddit users over the several weeks.

The r/slowcooking subreddit is currently packed with posts titled "Finally made The Soup — you guys weren't kidding, it's so good," "the soup lived up to all the hype 10/10" and "Obligatory 'The soup' post. Thank you this sub for recommending!"

"The Soup" was originally published on the food blog 365 Days of Slow and Pressure Cooking in October 2017 as Slow Cooker Creamy Tortellini, Spinach and Chicken Soup.

"You guys, this is a soup that you absolutely have to try," recipe developer Karen Bellessa Petersen wrote. "It is so super good. For reals! You are going to love it. It's like a creamy tomato soup with cheesy tortellini and chicken and then a pop of color from the bright green spinach."

Petersen's version is made in a slow cooker or Instant Pot and calls for a simple list of ingredients, some of which you may already have in your pantry: tomato paste, canned diced tomatoes, chopped yellow onion, garlic, dried basil, chicken thighs, spinach, cream or half-and-half and — arguably the most important addition — frozen cheese tortellini.

After a total of three to six hours in the slow cooker (or until the chicken is "very tender"), a relatively hands-off dinner is served.

As I mentioned, Petersen's recipe is designed for slow cooker or Instant Pot cooking. I feel like I'm one of the few folks out there who have neither appliance; I gave my brother my Instant Pot after it sat unused on my countertop and I'm currently in the market for a small slow cooker, mostly so I can make soup, ironically. So, I just used my handy Dutch oven for the hours of necessary simmering.

Petersen's version of "The Soup" also starts with a "microwave roux," made by combining the chopped onions, flour, dried basil, garlic tomato paste and olive oil in a microwave-safe bowl and then nuking it for five minutes, stirring every 90 seconds or so.

Since I was going to be using my stovetop to cook anyways, I simply made a normal roux for thickening the soup.

Finally, like many very good soups, "The Soup" is pretty riffable. I swapped in fresh basil for dried, fresh tomatoes for canned, and used bone-in and skin-on chicken thighs instead of boneless and skinless; all these decisions were made simply because these were the ingredients I already had in my kitchen. I simply popped it on the stove right before lunch and by the time dinner rolled around, I had a really fresh-tasting, but decadent meal waiting for me.

Initially, I just garnished it with some shaved Parm and parsley for a little extra pop of verdance, but then I remembered that I had a new jar of red pepper flakes and some toasty croutons in my pantry — both of which definitely made it into my bowl.

"If I could eat this soup every day this winter, I would be happy," Petersen wrote of her recipe. After trying it, I have to say that I'm inclined to agree