Judge concludes Jan. 6 rioter who broke into Capitol was acting on "Trump's instructions"

Yet another judge placed the blame for the Jan. 6 attack on the former president 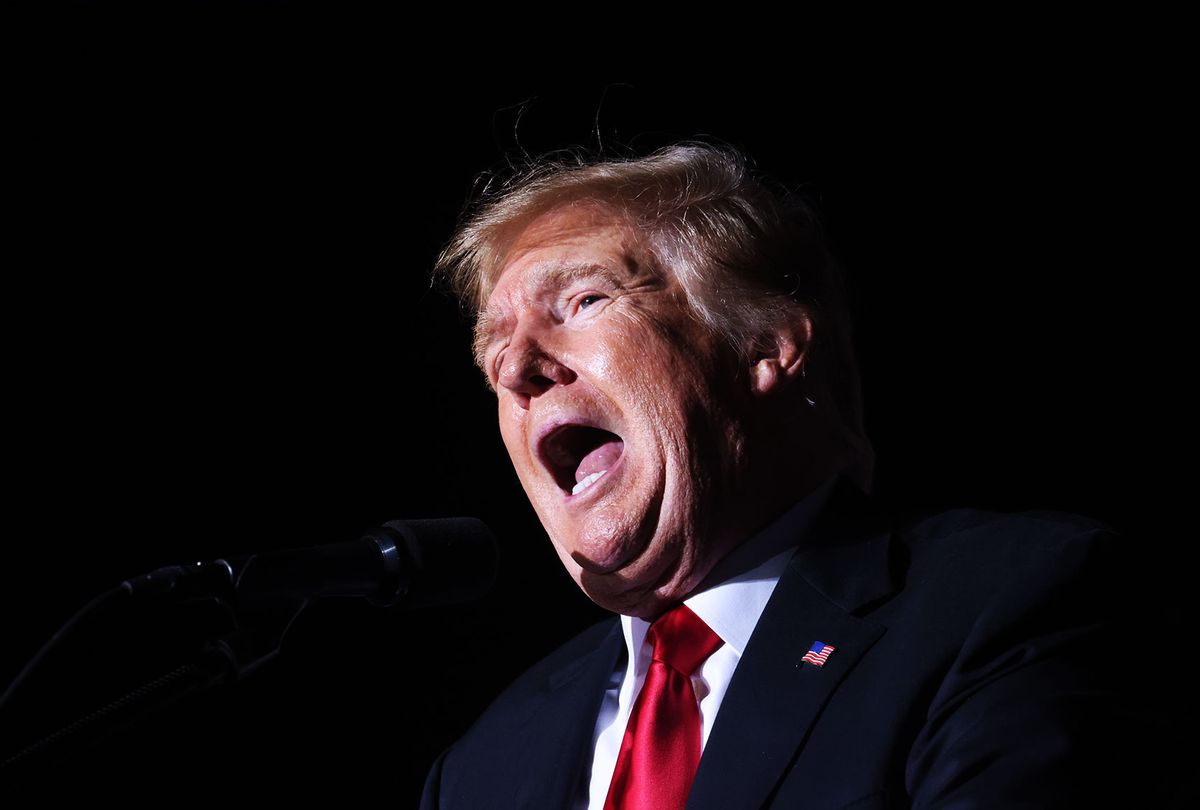 A federal judge said on Tuesday that a woman who stormed the U.S. Capitol during the Jan. 6 insurrection "followed then-President Trump's instructions" when she broke the law.

Danean MacAndrew traveled from California to Washington, D.C. to join Trump's rally, and later filmed herself storming the Capitol with fellow Trump supporters. After a three-day bench trial, she was found guilty of charges including violent entry and disorderly conduct in a Capitol building.

District Judge Colleen Kollar-Kotelly wrote in a 18-page opinion that shortly before Trump's "Stop the Steal" rally began on Jan. 6, MacAndrew tweeted at him "that she too felt that '[t]raps had been set' in the '#RiggedElection' of 2020." The former president then urged his supporters to literally stop the voting process by marching on the Capitol.

"Defendant marched to the Capitol where, she testified, she understood that only Congress had the power to fix the election's outcome and that Congress was likely in session while she was around and in the Capitol," Kollar-Kotelly wrote.

Judge: "More likely than not that President Trump corruptly attempted to obstruct" Congress

"Every step of the way, from the western boundary of Capitol grounds, to the West Lawn, to the Upper West Terrace, to the interior of the Capitol itself, she saw sign after sign that her presence was unlawful," Kollar-Kotelly said. "Nevertheless, heeding the call of former President Trump, she continued onwards to 'stop the steal.'"

Kollar-Kotelly then explained the verdict in the case: "Having followed then-President Trump's instructions, which were in line with her stated desires, the Court therefore finds that Defendant intended her presence to be disruptive to Congressional business."

The ruling aligns with the final report from the House Jan. 6 select committee, which alleged that Trump engaged in a "multi-part conspiracy to overturn the lawful results of the 2020 Presidential election."

While Trump has maintained his innocence, claiming that the allegations are nothing more than a political witch hunt, other Jan. 6 defendants have also accused him of giving them "presidential orders" to attack the Capitol. Even former Vice President Mike Pence told ABC News that Trump "decided to be part of the problem" on Jan. 6.

In a statement to Axios, Trump spokesperson Liz Harrington refuted the conclusions made by both Kollar-Kotelly and the House committee. Harrington claimed that Trump "urged the crowd to 'peacefully and patriotically make your voices heard' on Jan. 6, a fact, just like the Unselect Committee, this biased judge deliberately omitted."

"The violations of due process and unfair treatment of political prisoners by the U.S. government during this saga will forever be a stain on our country," Harrington added.

In another case against Jan. 6 defendant Alexander Sheppard last month, U.S. District Judge John Bates indicated that Trump's instructions to "fight like hell" during the rally could have been a sign to supporters that he wanted them to "do something more" than protest.

Bates shut down Sheppard's attempt to use the "public authority" defense because "President Trump neither stated nor implied that entering the restricted area of the Capitol grounds and the Capitol building or impeding the certification of the electoral vote was lawful." However, he did acknowledge that supporters may have been influenced to participate in an insurrection.

"But, although his express words only mention walking down Pennsylvania Avenue to the Capitol, one might conclude that the context implies that he was urging protestors to do something more — perhaps to enter the Capitol building and stop the certification," Bates wrote.

Bates's ruling cited the House panel's report, arguing that phrases used by the committee, such as "fight like hell," could "signal to protesters that entering the Capitol and stopping the certification would be unlawful."

His conclusion was that "even if protesters believed they were following orders, they were not misled about the legality of their actions and thus fall outside the scope of any public authority defense" which is consistent with the Select Committee's findings.

Bates was clear that there was "simply no indication" that Trump informed the crowd that storming the Capitol would be legal, but rather "his speech simply suggests that it would be an act of 'boldness' to 'stop the steal.'"

Various other Jan. 6 defendants have tried to employ the public authority defense, but this strategy has proved to be unsuccessful at trial. Dustin Thompson, who was convicted on all counts, told the jury that he was seeking Trump's "approval" and that he believed he was "following presidential orders."

The Justice Department argued in the Sheppard filing this month that it was "objectively unreasonable to conclude that President Trump or any other Executive Branch official could authorize citizens to engage in violent or assaultive conduct toward law enforcement officers and interfere with the Electoral College proceedings that were being conducted."

Mehta argued that Trump's statements before the riot "is the essence of civil conspiracy," because he spoke of working "towards a common goal" of marching to the Capitol.

"The President's January 6 Rally Speech can reasonably be viewed as a call for collective action," Mehta said.

Mehta also wrote that three lawsuits against Trump filed by Democratic members of the House and police officers who defended the Capitol on Jan. 6 could move to the evidence-gathering phase and possibly make it to trial.

"To deny a President immunity from civil damages is no small step. The court well understands the gravity of its decision. But the alleged facts of this case are without precedent," Mehta wrote.

"After all, the President's actions here do not relate to his duties of faithfully executing the laws, conducting foreign affairs, commanding the armed forces, or managing the Executive Branch," Mehta added. "They entirely concern his efforts to remain in office for a second term. These are unofficial acts, so the separation-of-powers concerns that justify the President's broad immunity are not present here."

Mehta's opinion could halt the protections of the presidency and the First Amendment due to the "one-of-a-kind" nature of the case, allowing a new opportunity to subpoena Trump that would shine a light on where presidential immunity ends.

As of now, there are no public markers that the criminal investigation into Jan. 6 has reached the former president, but Friday's decision could set the stage for possible civil trials months or years from now in which Trump would be a defendant.

"Today is a major victory for the rule of law, and demonstrates just how important the courts are for ensuring accountability," said Joseph Sellers, who represents a group of Democratic members of Congress that alleged civil conspiracy against Trump in court. The NAACP joined him in applauding the ruling.

Matthew Kaiser, a lawyer for Rep. Eric Swalwell, D-Calif., said it was a "great ruling," and a representative for the Jan. 6 police officers, Patrick Malone, called Mehta's ruling "a victory for democracy."

"It's good to see that no one is above the law. Everyone should be held accountable for their actions," said Capitol Police Officer James Blassingame Jr. in a statement.

Mehta added that the lawsuit could show that Trump coordinated with far-right groups like the Proud Boys and the Oath Keepers, who are also named in the lawsuit and have been charged with conspiracy. He noted that Trump told the Proud Boys to "stand back and stand by" before the election, and that he likely knew of the violent actions they planned.

Other Trump allies, including his son Donald Trump Jr., were successful in having their civil cases dismissed. "The allegations against Trump Jr. are insufficient to make him a co-conspirator in a plan to disrupt Congress from performing its duties," Mehta wrote.

Mehta made it clear that Trump Jr.'s situation was much different than his father's – who failed to tell his supporters to stand down and stop the violence at the Capitol.

"When the President said to the crowd at the end of his remarks, 'We fight. We fight like hell and if you don't fight like hell, you're not going to have a country anymore,' moments before instructing them to march to the Capitol, the President's speech plausibly crossed the line into unprotected territory," Mehta wrote.

about Trump on Jan. 6