Trump claimed he “just learned about Silk,” the other half of the anti-vax duo he hosted at the White House 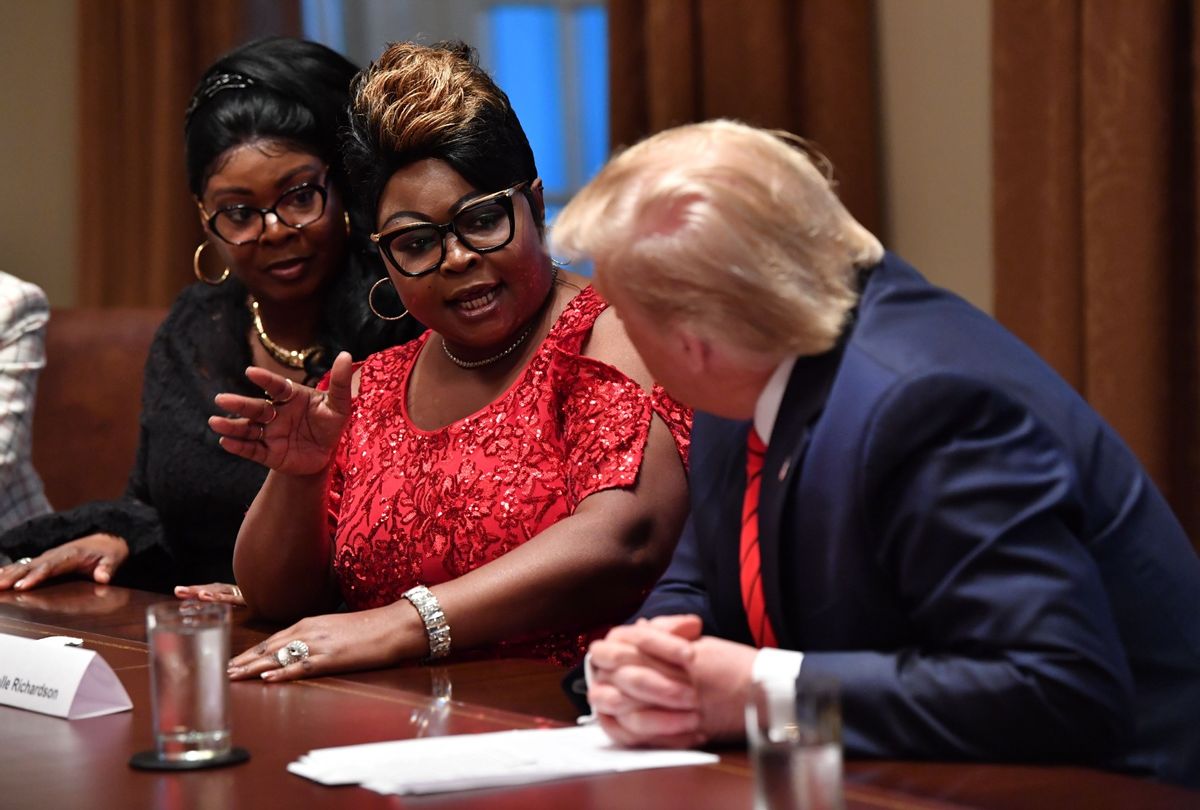 Hardaway, one half of the right-wing duo "Diamond & Silk," passed away earlier this month. Hardaway and her sister, Rochelle "Silk" Richardson, were prominent Trump supporters who spoke at his rallies and met with him at the White House. Both sisters were also vocal anti-vaxxers who lost their show on the streaming service Fox Nation after spreading conspiracy theories.

The cause of Hardaway's death is unclear but Richardson on Saturday suggested that Americans are "being poisoned" in a plot to "depopulate."

"People are dropping dead around here, and nobody is talking about it! They are dropping dead suddenly and unexpectedly," she said, echoing an unfounded conspiracy theory that the COVID vaccine has been linked to a rise in sudden deaths.

Richardson in her remarks recalled how Trump treated her and Hardaway "just like the other children: Eric, Don Jr., Tiffany."

But Trump during his remarks said he "just learned" about Richardson despite hosting her at the White House and at his rallies.

"The world has lost one of its brightest stars," Trump said. "But I see that we have another star who was equal to, but she stepped up and she is different. I'm serious, I thought I knew them both, I didn't. I knew Diamond, but I didn't know Silk at all. I just learned about Silk. You're fantastic, you're going to carry on beyond, beyond anybody's wildest imaginations."

Trump during his eulogy repeatedly complained about the length of the funeral.

At another point in his speech, Trump went on a tangent to push his familiar and false claims that the 2020 election was stolen.

"Just beyond bizarre, beyond rude, beyond anything that anyone would see in normal, polite, let me say decent society, and this is a guy that a lot of people want to be the next president of the United States again, and so on brand for him, too," he said on MSNBC. "Look, this is what happens when you have a narcissistic sociopath give a homily at a funeral. It won't go well."

"Instead of asking if Americans are vaxxed or unvaxxed, the real question to ask is: Are Americans being poisoned?" she said. "In the wild, when they want to depopulate and sterilize a large group of animals, they usually inject one animal, and that one animal infect the rest of the animals."

There is no evidence that COVID vaccines are causing people to die, much less people who were not even vaccinated. But that didn't stop Rep. Marjorie Taylor Greene, R-Ga., from citing Richardson's remarks to call for a federal investigation.

"I demand an IMMEDIATE investigation into Covid vaccines and the dramatic increase of people dying suddenly!" Greene tweeted. "This can no longer be ignored and is NOT political.."

about Trump and Diamond & Silk