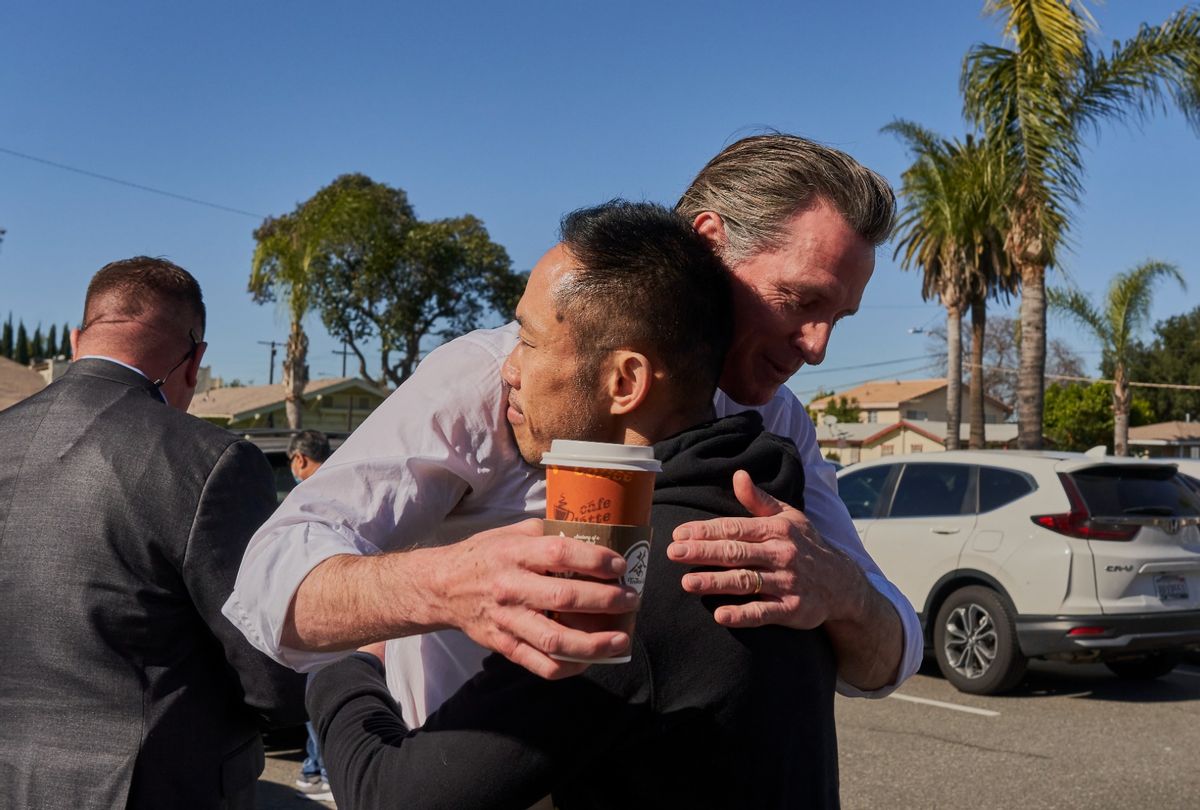 California Gov. Gavin Newsom on Monday was pulled away to be briefed on the state's second mass killing in three days while meeting with victims of the first one.

Newsom met with victims of a weekend mass shooting at a ballroom dance hall in the Los Angeles suburb of Monterey Park, where police say 72-year-old Huu Can Tran killed 11 people and injured nine others before he was found dead of a self-inflicted gunshot wound. Newsom's meeting was interrupted by shootings in Half Moon Bay, a coastal town more than 350 miles to the north, where seven Chinese farmworkers were killed in two separate locations, according to NBC Bay Area. Half Moon Bay resident Chunli Zhao, a 67-year-old worker at one of the facilities who apparently knew at least some of the victims, was arrested after the shooting, according to the Associated Press.

While Newsom was meeting with victims of the Monterey Park shooting, he specifically criticized the coverage on Fox News, accusing the right-wing network of "not doing a damn thing about gun safety, not a damn thing for decades."

"It's a disgrace what they say, what these people say every single night," Newsom told reporters.

The governor accused the network of perpetuating "crime and violence in this country" through "xenophobia" and "scapegoating."

Doubling down on "great replacement" paranoia: How the right is reacting to the Buffalo shooting

During his visit at the hospital, Newsom tweeted that he was "pulled away to be briefed on another shooting," referring to Half Moon Bay.

"Tragedy upon tragedy," he wrote.

He added that he has "great respect" for the Second Amendment and "no ideological opposition to someone reasonably and responsibly owning firearms and getting background checks and being trained," but said that mental health issues alone cannot explain America's gun violence.

California has among the strictest gun laws in the country. The Monterey Park suspect used a modified 9mm submachine gun-style semi-automatic weapon, according to the AP, which is illegal in California. The Half Moon Bay suspect used a semiautomatic handgun, but it remains unclear whether it was a legal firearm, according to police.

Newsom said he would continue to press for additional gun control measures in California, which has a 37% lower gun death rate than the national average, according to the Giffords Law Center. The governor told CBS News that only Democrats have led the push to tighten gun laws to prevent similar tragedies.

"With all that evidence, no one on the other side seems to give a damn," he said. "They can't get anything done in Congress."

The Half Moon Bay massacre marked the country's 37th mass shooting — meaning an incident in which four or more people are shot — and sixth mass murder this year, according to the Gun Violence Archive. The U.S. is already outpacing last year's rate, when there were 27 mass shootings and one mass murder in the first 23 days of January.

"Half Moon Bay is a beautiful community just south of SF. It's now part of the tidal wave of gun violence suffocating our country," tweeted state Sen. Scott Wiener, a Democrat who represents San Francisco. "34 mass shootings in 23 days isn't normal. If doesn't have to be this way. There are too many guns. Our country needs the will to say enough."

about the gun violence epidemic