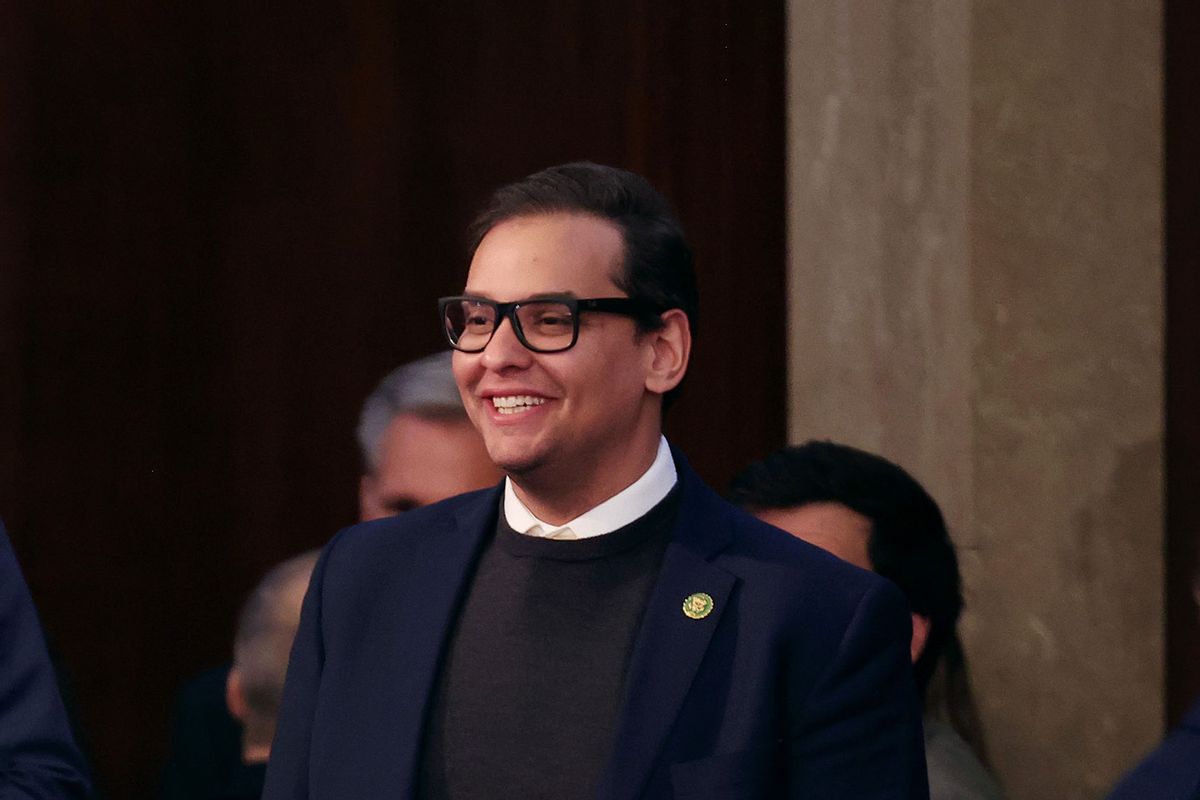 U.S. Rep.-elect George Santos (R-NY) watches proceedings in the House Chamber during the third day of elections for Speaker of the House at the U.S. Capitol Building on January 05, 2023 in Washington, DC. (Win McNamee/Getty Images)
--

Rep. George Santos, R-N.Y., who has a history of fabricating his own resume and lying about critical parts of his biography, claimed in an interview last month that he had been the target of an assassination attempt.

MSNBC's Rachel Maddow on her show Monday night played a video of an interview the New York congressman did with Brazilian podcast Rádio Novelo Apresenta.

In the clip from Dec. 7, Santos claimed that he was also a victim of alleged vandalism, which occurred while he and his husband were at a New Year's Eve Party.

"It was vandalized because we were at a Republican Party in Florida in December 2020. So that's it. I've experienced vandalism," Santos said. "We have already suffered an attempt on my life, an assassination attempt, a threatening letter, having to have the police — a police escort standing in front of our house."

Maddow reached out to Santos' office for comment but didn't receive a response.

While he didn't go into much detail about the alleged assassination attempt, Santos described another act of violence that allegedly took place on Fifth Avenue in the summer of 2021.

"I was mugged by two men," Santos said. "Before asking any questions, they weren't Black, they were even white, but they robbed me, took my briefcase, took my shoes and my watch. And that was in broad daylight. It was 3 p.m. I was leaving my office, going to the garage, getting my car, and I was mugged," he claimed, adding later: "The fear is real. It's surreal what we live through here."

The podcast hosts, who asked Santos for a police report documenting what happened, still haven't received a response, Maddow added.

In the same interview, the New York Republican explained his stance on immigration and specified that he is against undocumented immigrants because he is "assiduously critical of people who want to start their American Dream" the "wrong way".

He added, "Imagine starting a relationship with a lie or someone doing something wrong, right?"

But Santos himself has been dishonest about his professional and educational background, and continues to add more falsehoods to his ever-expanding list.

A Brazilian drag artist who says she knew Santos when he dressed in drag in Brazil recalled that the Republican congressman was a supporter of the country's progressive president during his younger years.

Eula Rochard made headlines for circulating a photo she claims is of Santos dressed in a red dress, Insider reported.

Santos, she said, went from backing left-wing president Luiz Inácio Lula da Silva to turning into "this crazy thing" after coming to the United States.

The New York Republican now embraces anti-LGBTQ policies and has accused the left of trying to "groom" kids – a conservative talking point that falsely equates sexual orientation and gender identity with pedophilia.

But prior to his incarnation, Santos supported Lula in the 2000s, who is a progressive.

"Lula promised to make laws to help us gays," Rochard said. "They were all Lulistas and Anthony was too because he hung out with us," Rochard told Insider, adding that "Anthony" was the name Santos used in Brazil.

Santos first denied performing as a drag queen, but later backtracked and told reporters, "I was young and I had fun at a festival. Sue me for having a life."

More videos have since emerged, revealing that it was more than a one-time thing.

Santos has increasingly become the subject of late-night mockery, prompting him to lash out on Monday.

"I have now been enshrined in late night TV history with all these impersonations, but they are all TERRIBLE so far," Santos tweeted. "Jon Lovitz is supposed to be one of the greatest comedians of all time and that was embarrassing— for him not me! These comedians need to step their game up."