Santos denied that he took $3,000 he raised for the dog's cancer surgery despite text message evidence 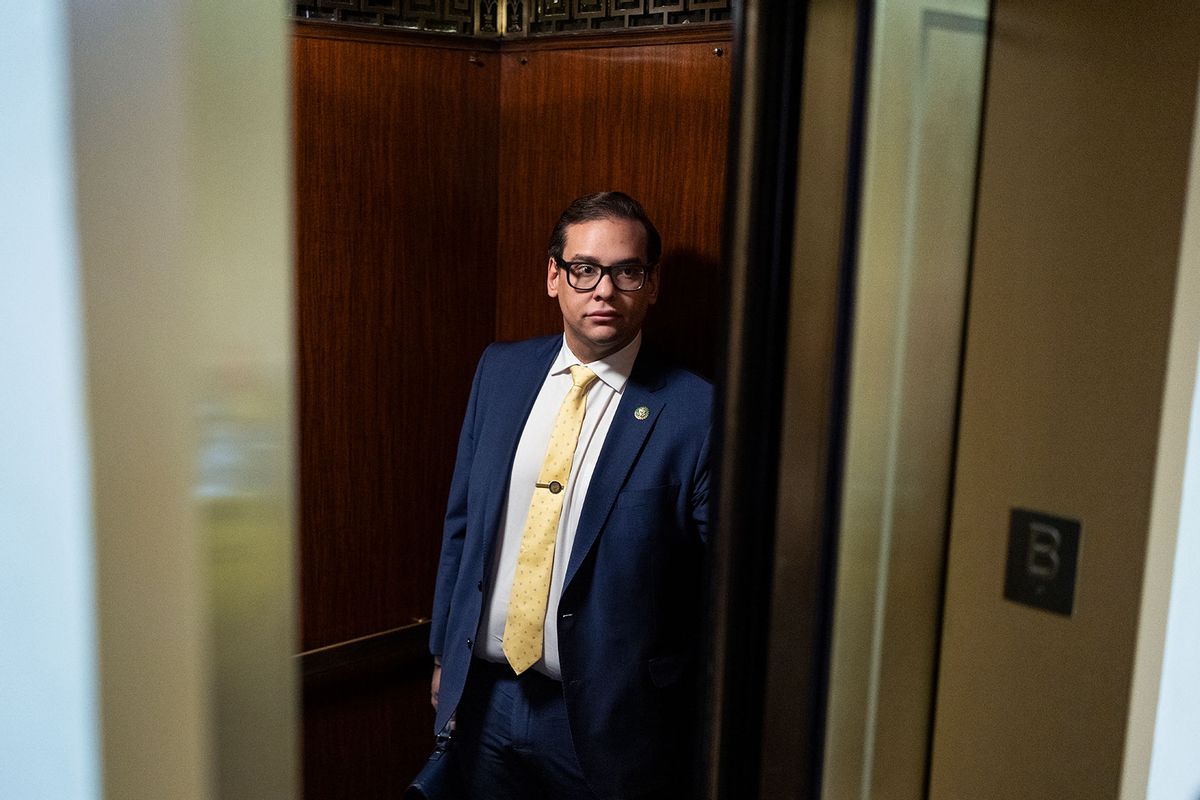 Navy veteran Richard Osthoff was living in a tent in an abandoned chicken coop in New Jersey when his service dog Sapphire developed a stomach tumor that would cost $3,000 to remove, he told Patch.

"I know a guy who runs a pet charity who can help you," Osthoff recalled a veterinary technician telling him.

The tech connected him to Anthony Devolder, one of the aliases Santos used for years, and told him he ran a charity called Friends of Pets United. There is no evidence that the charity ever existed, though Santos claimed that he saved thousands of animals through the group. He has also been caught fabricating much of his resume, educational history and other claims made during his campaign.

Osthoff and another veteran, retired police Sgt. Michael Boll, who tried to intervene to help Osthoff in 2016, told Patch that Santos closed the GoFundMe he set up for Sapphire after it raised $3,000. Then he disappeared.

"He stopped answering my texts and calls," Osthoff told the outlet.

Sapphire died Jan. 15, 2017, and Osthoff said he had to panhandle to raise money for her euthanasia and cremation.

"It was one of the most degrading things I ever had to do," he recalled.

Boll, who knew Osthoff through a veterans group, said he tried to intervene.

"I contacted [Santos] and told him 'You're messing with a veteran,' and that he needed to give back the money or use it to get Osthoff another dog," he told Patch. "He was totally uncooperative on the phone."

Santos told the two men that he planned to use the money to help other animals but Boll told him he could not do that because he specifically raised the money for Osthoff and Sapphire, according to the report.

Osthoff said that Santos was difficult to contact after he set up the GoFundMe page before the future congressman insisted that he bring Sapphire to a veterinarian's office in Queens. The vet tech drove Osthoff and the dog to the office, where Santos reportedly had "credit" from using it often.

"It was a tiny little hole in the wall place, but looked legitimate. The vet there said they couldn't operate on the tumor," Osthoff said, adding that his previous vet in New Jersey did not express similar concerns.

"I'm starting to feel like I was mined for my family and friends donations," Osthoff texted Santos in November.

In their final phone conversation, Santos told Osthoff that because things didn't go his way, he would use the money from the GoFundMe "for other dogs."

Osthoff pleaded for Santos to let him take Sapphire to another vet.

"My dog is going to die because of god knows what," he wrote.

"Remember it is our credibility that got GoFundme [...] to contribute. We are audited like every 501c3 and we are with the highest standards of integrity," Santos replied in a message obtained by the outlet. "Sapphire is not a candidate for this surgery the funds are moved to the next animal in need and we will make sure we use of resources [sic] to keep her comfortable!"

In another text, Santos said that he would take Sapphire for an ultrasound but Osthoff couln't come.

"And your [sic] not coming for the ride FOPU will handle this from now on only with the animal! We do not drive people around nor do we give them rides we transports animals in need not needy owners," Santos wrote.

The New York Times reported last month that the "charity" was never registered as a nonprofit.

Osthoff said that after their conversation, "he wouldn't pick up the phone."

The GoFundMe was deleted and he could not get a response from the site, Osthoff told Patch.

The details of Santos' purported charity work are unclear. He created a Facebook group for the charity around 2015 where members could share images of dogs that needed foster homes or donations. The group was archived in 2020. Santos also posted GoFundMe fundraisers for dogs in need of medical care, a former co-worker told Patch.

The report came hours after Santos was named to the House Small Business Committee and the Science, Space, and Technology Committee.