"They come for the fighters": Gaetz asks Santos about funding as guest host of Bannon's "War Room"

Filling in for Steve Bannon on Thursday's "War Room," Rep. Matt Gaetz had questions, but didn't get many answers 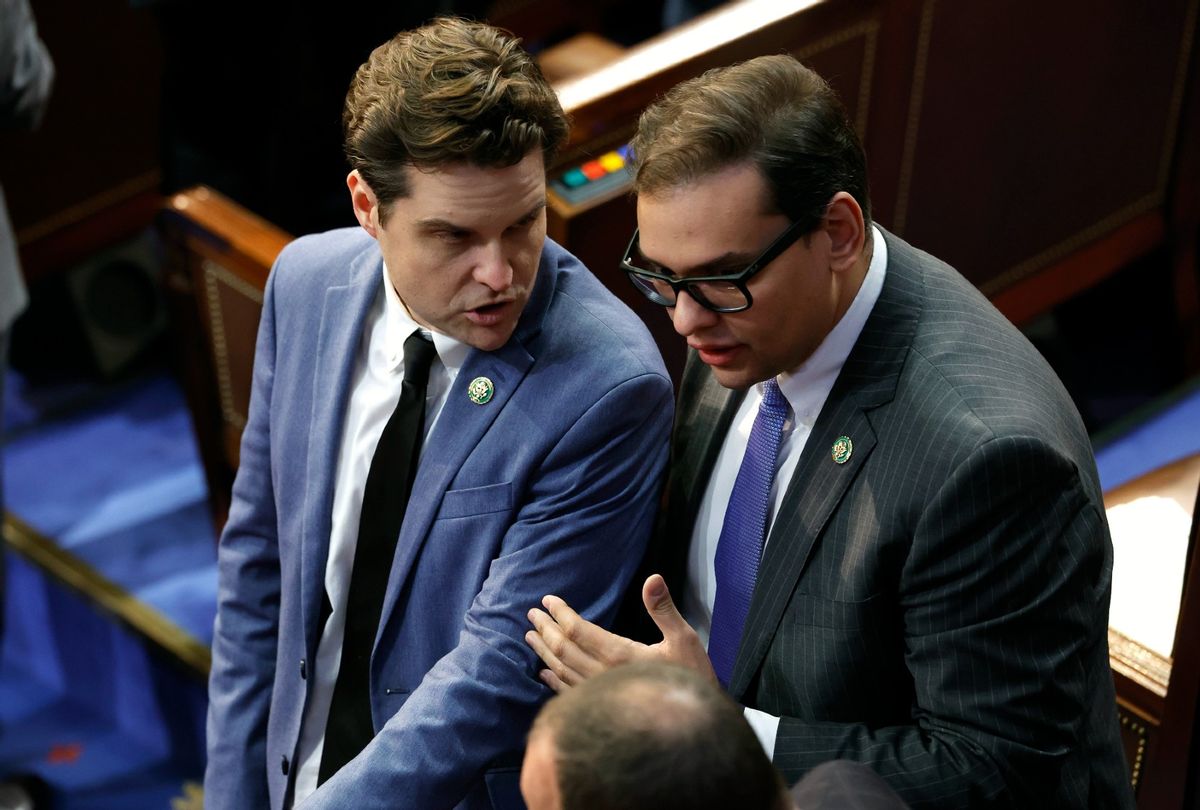 U.S. Rep.-elect Matt Gaetz (R-FL) (L) talks to Rep.-elect George Santos (R-NY) in the House Chamber during the second day of elections for Speaker of the House at the U.S. Capitol Building on January 04, 2023 in Washington, DC. (Chip Somodevilla/Getty Images)
--

During Thursday's episode of Steve Bannon's "War Room," the show featured a special guest host as Bannon was "away on assignment."

Republican Rep. Matt Gaetz, seated in front of a small American flag and a large picture of Jesus, was on hand to fill in for Bannon, closing out the show with a discussion with Republican congressman-elect from New York, George Santos, regarding the source of his campaign funding.

Asking Santos to explain where he got the $705,000 dollars that he personally deposited into his campaign fund, Gaetz did not exactly receive a straight answer.

Broaching the topic of various criticisms against Santos, Gaetz said "One of the principal critiques I've heard is that a lot of money was donated to your campaign by you . . . where did it come from?"

"That is an answer," Gaetz said in return, having not received much of an answer at all. From here he goes on to say that he also partially funded his own campaign by selling off properties, which led to Santos opening up a bit more.

"I've worked my entire life. I've worked an honest life," Santos said. "I've never been accused of any bad doings. It's the equity of my hardworking self."

As far as any "bad doings" in relation to Santos, he and Gaetz go into a bit of that at the top of their interview when Gaetz brings up that Santos was found to have embellished his resume.

"You have admitted embellishing your resume. You've acknowledged it. You've apologized for it. Some have said that you shouldn't be seated on committees for it. I would offer that if we didn't seat people on committees who embellished their resume for Congress we probably wouldn't be able to make a quorum," Gaetz said, offering Santos an easy out on the topic which he took by offering no further comment on the matter.

Watch Gaetz as guest host of "War Room" below.