"They're trying to George Floyd me," Keenan Anderson cried out as multiple Los Angeles police officers subdued him 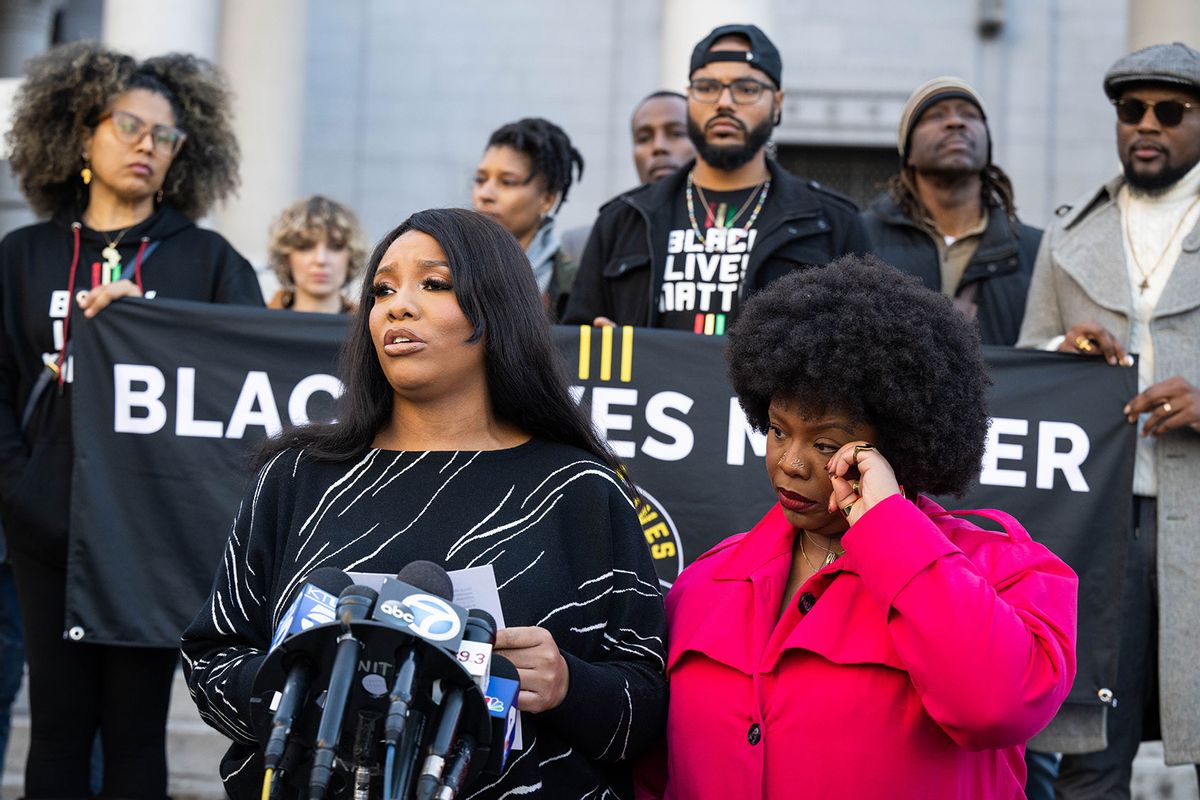 The summer of protests in response to the video-recorded police murder of George Floyd in 2020 was one of the largest and most diverse in American history. It is estimated that between 15 and 26 million people took to the streets in America and participated in other protest activities and organizing to show their outrage and disapproval at the police murder of Floyd and the cultural problems of police brutality and anti-Black bias and white supremacy more broadly.

The protests took place in the midst of resurgent white supremacy, white rage, and the Trump regime's war on democracy. These protests also embodied radical possibilities for reforming America's police, the carceral society, and the larger culture of cruelty. In a 2020 essay that appeared in Jacobin, political scientist Douglas McAdam, who is one of the world's leading experts on social movements, described the moment:

Put together, we appear to be experiencing a social change tipping point that is as rare as it is potentially consequential. However, notwithstanding all the energy and momentum generated by the protests, and what appears to be a related drop in Donald Trump's poll numbers, his reelection in November remains a real threat, all the more so since the pandemic threatens the high-voter turnout that Democrats rely on, as well as enabling the kind of voter suppression that the Republicans favor.

The best we can hope for is to do everything we can to maintain the momentum, energy, and inclusive, pragmatic, and nonviolent character of the current protests. Our goal should be twofold: to capitalize on the possibilities for change inherent in this moment, and to begin to pivot toward forms of electoral mobilization crucial to success in the fall. The survival of American democracy will likely depend on how successfully we attend to this agenda.

So where are we now?

While it is certain that the summer was a highly influential and formative moment for the political identities of an entire generation of young people and others, unfortunately, the lasting movement necessary to create that better and more just America has not yet developed.

The question that remains is how to translate such a diverse and prolonged mass mobilization into social change. Unfortunately, the effects of the protests in summer 2020 have been relatively disappointing so far, yielding mostly what Keeanga-Yamahtta Taylor calls "the low-hanging fruit of symbolic transformation." Systemic racism is one of a range of progressive priorities that have highlighted the vast distance that must be traveled between protest and legislation or other forms of policymaking. Once the masses are mobilized to participate in sustained activism, there is still much to learn about how to channel outrage in the streets into enduring social and political change. There is no question, however, that the opportunities are substantially increased when protests are large, persistent, and include crowds that are diverse enough to be representative of the general American public.

In 2022, America's police killed at least 1,176 people. That is the highest number of people killed by police in the United States since experts started compiling that data on a nationwide scale in 2013. The Guardian reports:

The data release comes two years after the murder of George Floyd sparked national uprisings calling for racial justice, police accountability and reductions in the funding and size of police forces. Despite the international attention and some local efforts to curb police brutality, there has been an intensifying backlash to criminal justice reform, and the overall number of killings has remained alarmingly high.

Police across the country killed an average of more than three people a day, or nearly 100 people every month last year according to Mapping Police Violence. The non-profit research group maintains a database of reported deaths at the hands of law enforcement, including people fatally shot, beaten, restrained and Tasered.

Public opinion polls, meanwhile, continue to show consistent divides across lines of race where white Americans — especially Republicans — are much more likely to believe that police abuse of the public is not a significant problem than are Black Americans and Democrats. As a 2021 essay at the Morning Consult highlights, polling information shows that "as Democrats and Black Americans increasingly cast police violence as a grave issue, the declining threat perception among the broader population is fueled by shifting views among white Republicans: 41 percent view police violence as a serious problem, down 18 points since 2016, while the share of white Democrats who said the same has increased slightly over that time frame to 88 percent. As a whole, Democrats and Black people are twice as likely as Republicans to see police violence as a serious problem, and the share of GOP adults who describe racial discrimination against Black people as "one of the biggest problems facing America today" has fallen 10 points from last summer."

A month after Buffalo: Is white America ashamed — or has it already forgotten?

Public opinion polls and other research show that a majority of Republicans, Trumpists, white "conservatives" and right-leaning independents fantastically believe that white people are more likely to be "victims" of "racism" and "discriminated against" in American society than are Black people. A majority of Republicans also subscribe to the nonsense and delusional white supremacist conspiracy theory that white people are somehow going to be "replaced" by non-whites in America and Europe.

America's modern police can trace their origins back to the slave-catching patrols of the antebellum era. Many white Americans are highly supportive of the country's police and its abuse of Black and brown people because they are viewed as "defenders" of racial authoritarianism and white privilege in the form of "law and order." As such, it is no surprise or coincidence then that white supremacists, neo-Nazis, right-wing militias, and neofascists have systematically infiltrated the country's law enforcement agencies on the federal, state, and local levels. Contrary to the right-wing lie about how "liberals" and "Democrats" want to "defund the police", both the Democratic and Republican Party continue to support aggressive policing that in turn leads to unnecessarily violent and often preventable lethal outcomes.

So while these discussions of data and institutions are critical, they should not be a substitute for the harsh and lethal reality that power in its many forms is enacted upon real human beings and their bodies.

On the afternoon of Jan. 3, Los Angeles police detained and then repeatedly "tazed" (language that is corporate public relations and marketing-speak for severely shocking a person until they lose voluntary control of their muscles) a 31-year-old Black man named Keenan Anderson. One of the shocks lasted 30 seconds. Anderson would die several hours later at the hospital after experiencing a cardiac emergency.

He was a much beloved high school teacher and father.

The lethal encounter began when Anderson attempted to get help from the police following a car accident. Police body camera footage released to the public last Wednesday shows Anderson repeatedly pleading and begging for his life.

These would be some of the last words Anderson would say before being shocked repeatedly and then dying several hours later.

Anderson's cousin is Patrisse Cullors, a co-founder of the Black Lives Matter movement. "My cousin was asking for help, and he didn't receive it," she told the Guardian. "He was killed….Nobody deserves to die in fear, panicking and scared for their life. My cousin was scared for his life. He spent the last 10 years witnessing a movement challenging the killing of Black people. He knew what was at stake and he was trying to protect himself. Nobody was willing to protect him."

"They're trying to George Floyd me."

The Los Angeles police have a long and notorious history of racial profiling and other abuse of the Black and brown community. The death of Keenan Anderson is also part of a much larger pattern where police in California are much more likely to use force against Black and brown people than they are white people. Now the Los Angeles police are following a common script in the aftermath of such egregious acts of violence against unarmed Black people and members of other marginalized groups: publicly attacking the reputation of the victim in order to make them appear somehow responsible for their own deaths. The next likely step in their attacks on Anderson will be for the police to claim that he died of "excited delirium," which is a nonsense medical "diagnosis" summoned up by police lobbyists, "copagandists" and other enablers or police thuggery and violence, most infamously after the killing of George Floyd.

As seen in the tragic example of Anderson and so many others, the type of institutional and systemic violence represented and channeled by America's police and other law enforcement is killing Black and brown people both individually and as a group. This type of violence results in what physicians, mental health professionals, social scientists, and other experts have described as "racial battle fatigue," a form of post-traumatic stress disorder where the victims of white supremacist and other racialized violence (both on an interpersonal and systemic/institutional level) manifest a range of negative mental, emotional, and physical health outcomes that result in higher rates of chronic illness and death as compared to white people and other socially dominant and privileged groups in America and elsewhere.

America is a society that is historically structured around white supremacy and racialized outcomes which privilege those deemed to be "white" and disadvantage and causes harm to those deemed to be non-white. In that way, racial battle fatigue is America's racial hierarchy working precisely as designed and intended as opposed to something accidental or a function of happenstance or error. Ultimately, such a system persists because White America and many individual white people want it to.

Last Monday was Dr. Martin Luther King Day. In his famed and much-misunderstood and (literally) now white-washed "I Have a Dream Speech" that was delivered at the 1963 March on Washington for Jobs and Freedom, Brother King said that "We can never be satisfied as long as the Negro is the victim of the unspeakable horrors of police brutality".

That reality continues some 60 years later.

To be Black or brown in America is to exist in a state of terror and fear when encountering the country's police and other law enforcement (as well as the white vigilantes and those allied with them who believe they are empowered to enact violence against non-white people with impunity). It will require a great amount of growth in white Americans' capacity for empathy and human respect to step outside of the narcissism and self-centeredness of Whiteness and white privilege to allow themselves to accept the reality and truth of Black and brown people's lived experiences.

As America continues to struggle against neofascism, Trumpism, and the other systems of cruelty and collective societal pathology that sustain and birthed such an evil political project, white Americans (and others) will need to realize that embodying real empathy and respect across lines of human difference is an integral part of the struggle for democracy. The violence and thuggery that is routinely visited upon innocent Black and brown people and other marginalized groups by America's police and other law enforcement will (and to the surprise of many white Americans) soon be applied to all people deemed by the powerful to be "criminals" and "suspect" and "the enemy." White Americans and others who believe themselves immune to that corrupt power will increasingly learn they are not in fact safe as the Republican fascists and their forces continue to grow in power.