How the Democrats differ on Iraq

The CNN/YouTube debate exposed a fault line among the candidates on the issue of residual troops. 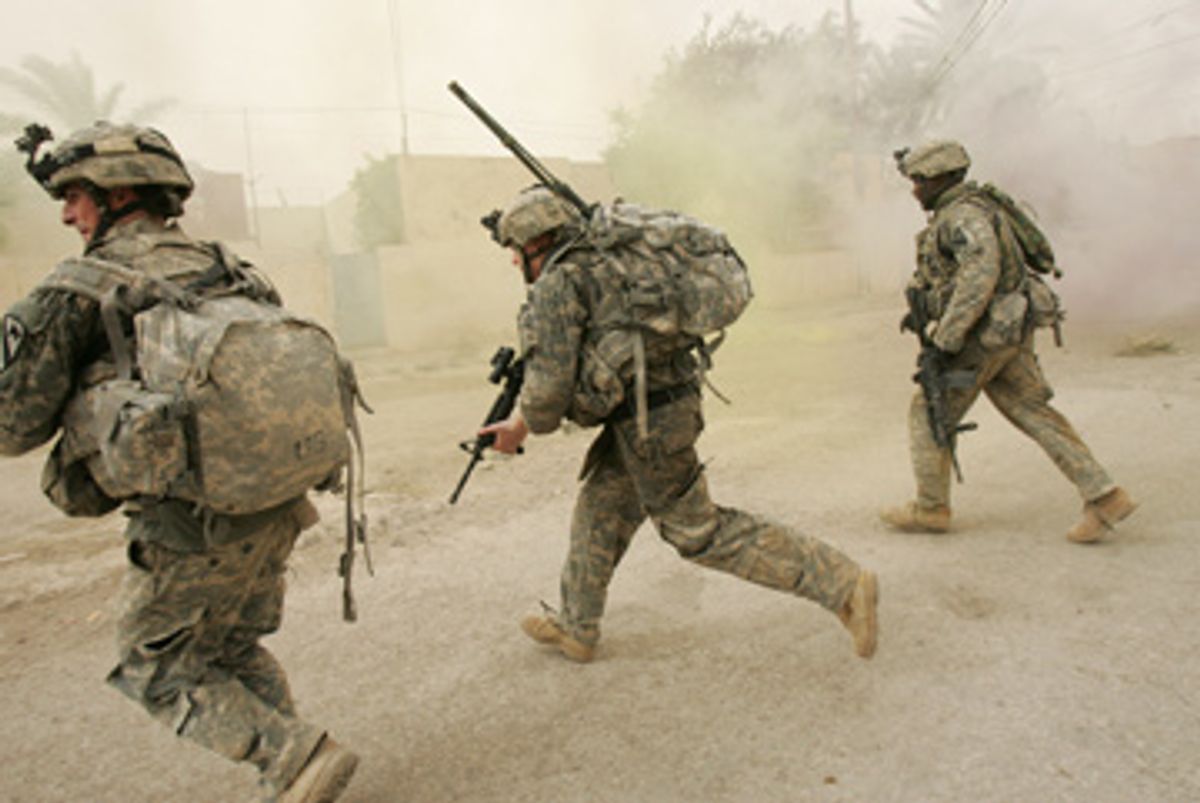 It was the political equivalent of the sighting of a unicorn. In the midst of Monday night's YouTube debate, there emerged that fabled rarity: a vigorous and relevant policy debate among the Democratic presidential contenders over Iraq. Forgotten for a moment was the temptation to play for applause lines by simply excoriating the Bush administration or loudly bellowing that Congress had to miraculously conjure up the missing Republican votes to change the president's policies.

The issue that exposed these Democratic divisions was, in essence, what should a new Democratic president do about the Iraq war? The fault line Monday night was primarily between Bill Richardson ("I believe we should bring all the troops home ... in six months with no residual forces") and Chris Dodd on one side, and Joe Biden ("There is not a single military man in this audience who will tell this senator that he can get the troops out in six months") and Hillary Clinton ("Joe is right") on the other.

It has nearly been five years since the congressional vote authorizing Bush to wage war in Iraq -- and the arguments over that 2002 decision (among presidential contenders only Barack Obama from the sidelines and Dennis Kucinich in the House opposed it) have grown stale with constant repetition. Far more potentially relevant in choosing a new president is the future-oriented question, what now in Iraq? -- assuming that the next president will inherit from Bush something like the current Mesopotamian mess.

In political terms, Richardson and Dodd, both trailing in the polls, could derive an advantage with Democratic activists from their unstinting positions on getting out of Iraq. As front-runners, in contrast, Clinton and, to a lesser degree, Obama are trying to camouflage the gap between their nuanced views on Iraq and the total-withdrawal-now expectations of many primary voters. A long shot, Biden is trying to win credibility and support as the truth teller in the Democratic field.

Earlier this month in Manchester, N.H., candidate Clinton won wild applause when she asked the crowd that had turned out to see her and the former president, "Are you ready to bring the Iraq war to an end...?" What was barely audible above the cheers were the four hedge words that ended the question: "...as soon as possible?" Obama candidly prefaced a discussion of the war at a town meeting in Hampton, N.H., last Friday by saying, "We've got bad options and worse options in Iraq."

In an interview with Salon in early June, Clinton made clear that she does not favor a pell-mell rush to exit. Asked how many U.S. troops would remain in Iraq six months into a Clinton administration, she said, "I cannot give a figure because ... there is no way to predict what will occur between now and then. I have said repeatedly that I am committed to taking our combat troops out of the midst of this sectarian civil war. And there may well be vital national security interests that require a continuing presence, although I do not support permanent bases or a permanent occupation."

I posed an analogous question to Obama at a press conference at Dartmouth College in late May. His answer was seemingly more dovish. "It is hard to say, since we don't know where we will be at in January of 2009. It depends on whether we are able to initiate the kind of based redeployment that I called for back in January. My expectation is that we do not have active combat forces in Iraq by that time." The January proposal to which Obama referred called for a withdrawal of all combat brigades by March 31, 2008. But the Illinois senator also envisioned at that time an ongoing U.S. presence for force protection, counterterrorism and the training of Iraqi security forces.

A new Democratic-leaning Washington think tank, the Center for a New American Security, released a paper last month that estimated the number of troops that might be required for a more limited U.S. mission in Iraq. While the policy proposal by James N. Miller and Shawn W. Brimley was not endorsed by any presidential candidate, it did capture aspects of the notions advanced by Clinton, Obama and Biden. The CNAS paper suggested that an initial U.S. force of about 60,000 troops would be needed for an effective training mission, counterterrorism measures against al-Qaida, force protection and overall logistical support. While this would be a far cry from current Bush "surge" levels, it would also not fulfill the "bring the troops home now" mantra of antiwar activists.

In an interview with Salon earlier this month, Biden outlined his own long-standing plan for a tripartite political division of Iraq under a federal system, with Sunni, Shiite and Kurdish components. But he also conceded that "I may be left on Jan. 20, 2009, with no option but to withdraw and contain. To literally have inherited ... a fractured country where there is no way to put Humpty-Dumpty back together." Still, Biden stressed that either regional forces or U.S. forces would be needed to "try to contain on [Iraq's] borders and keep this civil war from metastasizing."

John Edwards is the only major candidate whom I have not asked about residual forces in Iraq in 2009. But in a speech to the Council on Foreign Relations in late May, Edwards said, "Once we are out of Iraq, the U.S. must retain sufficient forces in the region to prevent a genocide, deter a regional spillover of the civil war, and prevent an al-Qaida safe haven." In a statement provided to Salon on Tuesday, deputy campaign manager Jonathan Prince wrote, "When we say complete withdrawal we mean it ... But we're also being honest. If John Edwards is president, we're not going to leave the American Embassy in Iraq as the only undefended embassy in the world."

Both Dodd and Richardson, in interviews with Salon, conceded it might be better to abandon the Green Zone in Iraq entirely than to try to defend the U.S. Embassy with thousands of Marines. As Richardson put it, "Five thousand to guard an embassy -- that means that the embassy is not safe. I would pull the embassy out if it is not safe."

Regardless of campaign statements, predicting what a new president will do upon moving into the Oval Office in 18 months is dicey. Any of the Democratic candidates could revise, with full justification, their Iraq plans based on the continuing deterioration of the situation. But the Iraq-in-2009 question does offer a novel way to group the Democratic field. They are right now divided between what some might call the realists (Clinton, Obama and Biden) and the purists (Edwards, Richardson, Dodd and, of course, Kucinich and Mike Gravel). As the YouTube debate illustrated, it may prove far more revealing in the months ahead to ask more foreign-policy questions about the challenges of 2009 rather than continue to bicker over the 2002 vote on the war in Iraq.