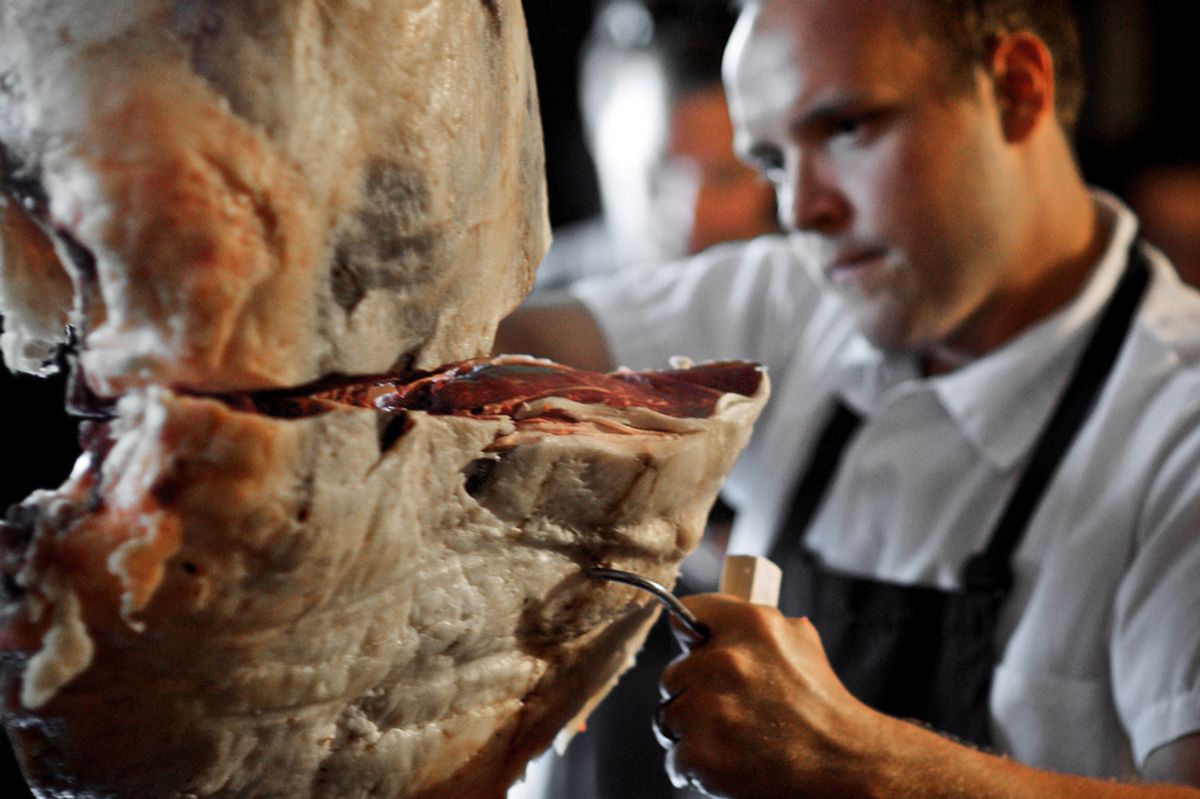 "The first butcher party," Ryan Farr says, "was called 'Hop, Hop, Hop, Into the Burning Ring of Fire.' That was on Easter last year, and we did rabbits."

Farr is the star of San Francisco's 4505 Meats, "Home of Revival Butchery," and he is taking his gospel to the barroom. He is one of a handful of young practitioners across the country who are staging bacchanalian "butcher parties," where they bring whole carcasses -- from rabbits to steer -- to bars, hang them up, take them apart, and cook them while wide-eyed partyers wash down the resultant meaty snacks with cocktails and beer. The resurgence of artisan butchery is supposed to be about respect for traditional craft, an emphasis on ethical, sustainable meat eating, and a renewed awareness of where our meat really comes from. Do blood-and-booze-soaked butcher parties cheapen these ideals?

Farr doesn't think so. "It's very educational," he says. "You get to see the whole animal, it gets processed in front of you, and then you eat it. And at the same time you get to have martinis or beer. It's just a good time all around."

But Tom Mylan, one of the butchers at the Meat Hook in Brooklyn, is not so sure. "It's a real double-edged sword," he says. "It's popularizing and getting people interested in butchering, and I think that's of value. On the other hand, it's one of those things that's so inherently flimsy that it's feeding this sort of fashion trend of butchering."

And the gory craft is becoming ever more stylish. In a trend piece, the New York Times called both Farr and Mylan part of a cadre of "Rock Star Butchers," and Mylan says "dozens" of television producers have approached him about a reality TV series based in his shop. "It's a fashion trend of the most hollow and irritating sort," Mylan says. "That sort of hyperbole just doesn't make sense to me."

Mylan fears that the people going to butcher parties will tire of it the way they tire of all fads, leading to a "butchering backlash" when people start, as he says, "calling bullshit" on the trend. He says, "Hopefully one out of the 50 people getting drunk at a bar, doing the latest thing, will stay with it and remain interested in it. But on the other hand, I think it's going to lead to self-parody." For people taken in by the fashion of meat handling, it will be "the thing they were into in 2010. Like, 'I was really into indie rock, and then I was into artisanal cheese, and then I got into butchering.'"

Farr sees butcher parties less as trendy events than attempts to recapture a more traditional mood around eating meat. "[It's] kind of the same thing as slaughtering an animal on the farm and eating it right there," he says. "It doesn't happen as often as it used to." He admits that some patrons miss the point. "There are always going to be people who are just coming to see a show," he says. "They usually are the ones that are getting drunk and pushing people around for chicharrones and hot dogs. But that's anywhere, you know?" He says that the majority of partygoers, though, come with questions about the craft and a desire to learn, and he encourages them to attend his intensive training sessions later. "The classes are for the hands-on, face-to-face educational part. The parties are to have fun and to educate people at the same time, but it's not in a scholastic environment," he says. "You know, people are doing shots."

But this, according to Mylan, is exactly the problem. "It's kind of sending a message like, animals are like strippers, or animals are like whores." He doesn't consider himself overly pious about butchering -- his upcoming "Date Night Butchering" class at Brooklyn Kitchen, called "Lambs of Love," will feature "libations befitting a Saturday night" -- but he sees the bar parties as crossing a line. "It's not like we don't have fun at our classes, because we do," he says. "We drink beer. It's just not at a bar; it's not this group spectacle thing."

Bringing the animals and knives into a bar suggests transgression, a general sense of macho naughtiness that seems to undermine nouveau butchering's emphasis on respect for the animal. Many who trumpet the trend toward artisanal meat production note that some former vegetarians and vegans attend butchering classes, willing to eat meat that they take from the creature themselves. The point for many is having a personal relationship to meat rather than seeing it as a product under glossy plastic wrap. The point is to remember that it was a life. Hanging a steer from the rafters at a bar and cutting it while people slug bourbon and take pictures with their iPhones seems only tenuously connected to this concept.

Still, Farr urges doubters to look at the bigger picture. "I think it's disrespecting an animal when it's in a huge plant with 10,000 other animals, just going through a line, getting cut and going into Cryobags and Styrofoam," Farr says. "Packing a thousand pigs into a farmhouse that's supposed to hold 800 animals -- that's disrespectful."

He feels passionately that, no matter where he does it, "showcasing a beautiful animal that somebody raised," preparing it well, and using the entire animal is an expression of reverence. "I have the utmost respect for anything that I handle, be it a whole hog or a vegetable that came out of the ground, because I know the farmers and I know the ranchers," Farr says. And to him, the parties fill a gap in the public's relationship with meat -- getting to know their butcher. "Because that's the connection that was lost when the big corporations took over the meat industry," Farr says."There was no connection between the meat and the butcher."

Artisan butchery, still limited mostly to communities of food enthusiasts with money to spend on high-quality products, is not in itself a solution to our country's issues with meat, but Farr and Mylan are actively trying to untangle the knots of industrial meat production. They may disagree about details, but both men are remarkably passionate and articulate. They encourage debate and offer meat eaters thoughtful, and crucial, options.

"There needs to be something different," Farr says, "because there's a lot of bad meat out there."