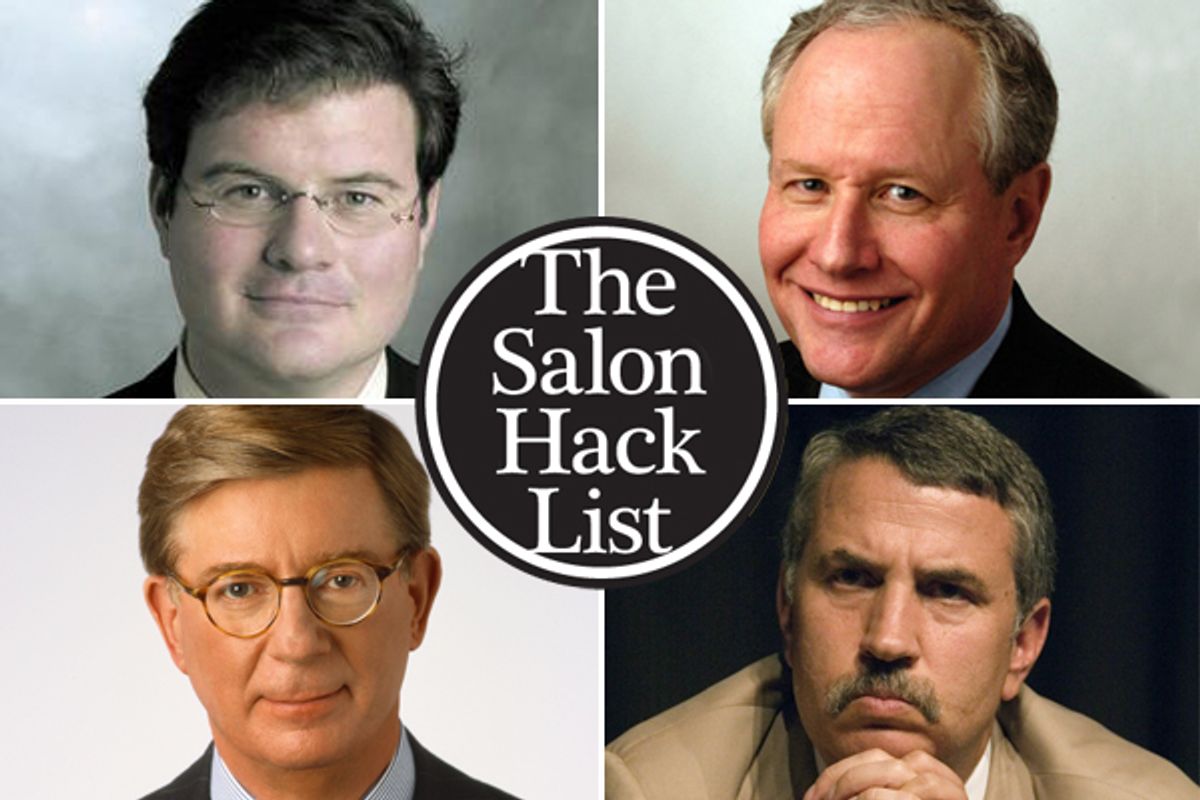 You can think of these guys as retired from the Hack List (like a Hall of Fame) or as simply to dull to rip into at length for a second time, but these 2010 Hack List veterans did not actually improve their game in 2011.

The fake Democratic pollster is repeating himself, and somehow it just gets dumber every time.

In March Jonah Goldberg literally wrote "meh" instead of rebutting an argument, in his nationally syndicated political column.

Thomas Friedman continued to, domestically, demand a centrist third party that acted exactly like our current centrist Democratic party. But his best work, as always, concerned foreign lands. What other columnist would have the balls to go to the scene of a popular revolution and "quote" a native pleading with the wise American columnist to explain what he thinks is going on in her country?

Poor Marty lost his New Republic blog and "editor" title, but the magazine still lets him go on at length about middle eastern affairs, despite his lengthy and well-documented history of being an unrepentant anti-Arab racist.

Will got an early start on his traditional election year conflict of interest, trashing Romney and Gingrich on television and in print before being forced to disclose that his wife is a paid Rick Perry advisor. Also, he's still lying all the time about climate change.

The lying torture-defender still has a Post column, and even got to ask questions at a presidential debate! It's not as morally repulsive as his other work, but the single silliest thing he wrote this year was this bit claiming that "Occupy Wall Street" was to blame for the inevitable failure of the supercommittee.

Kristol's Weekly Standard belatedly and bizarrely hopped on the Gingrich bandwagon as the year drew to a close. And why not? Kristol wouldn't be Kristol if he didn't endorse and prop up toxic, unelectable Republicans.

The inventor of annoying political blogging moved his blog to the Daily Caller, where I assume he is still complaining about immigrants. His hackiest moment: I'll say, picking more or less at random, this post, expressing dismay that Arizona nutcase politician Russell Pearce was recalled, because it sent the message that Arizona voters may be going soft on fanatical hatred of immigrants.

Tucker Carlson's Daily Caller news site is as inessential as ever. His hackiest moment of the year: Hiring a professional Berman and Company liar to edit the Caller, then printing a rather blatantly untrue story about the EPA.

Tina may be working incredibly hard at salvaging a dying newsweekly, with a clueless boss holding the purse strings, but on the other hand, that Princess Di fanfic cover was unacceptable. (Her actual hackiest moment, though, might be doing a phone interview and a conference call from the Acela's quiet car.)