"The Avengers" and Hollywood's gender wars

Despite the success of the "Hunger Games," this summer's blockbusters are aimed squarely at male action fantasies 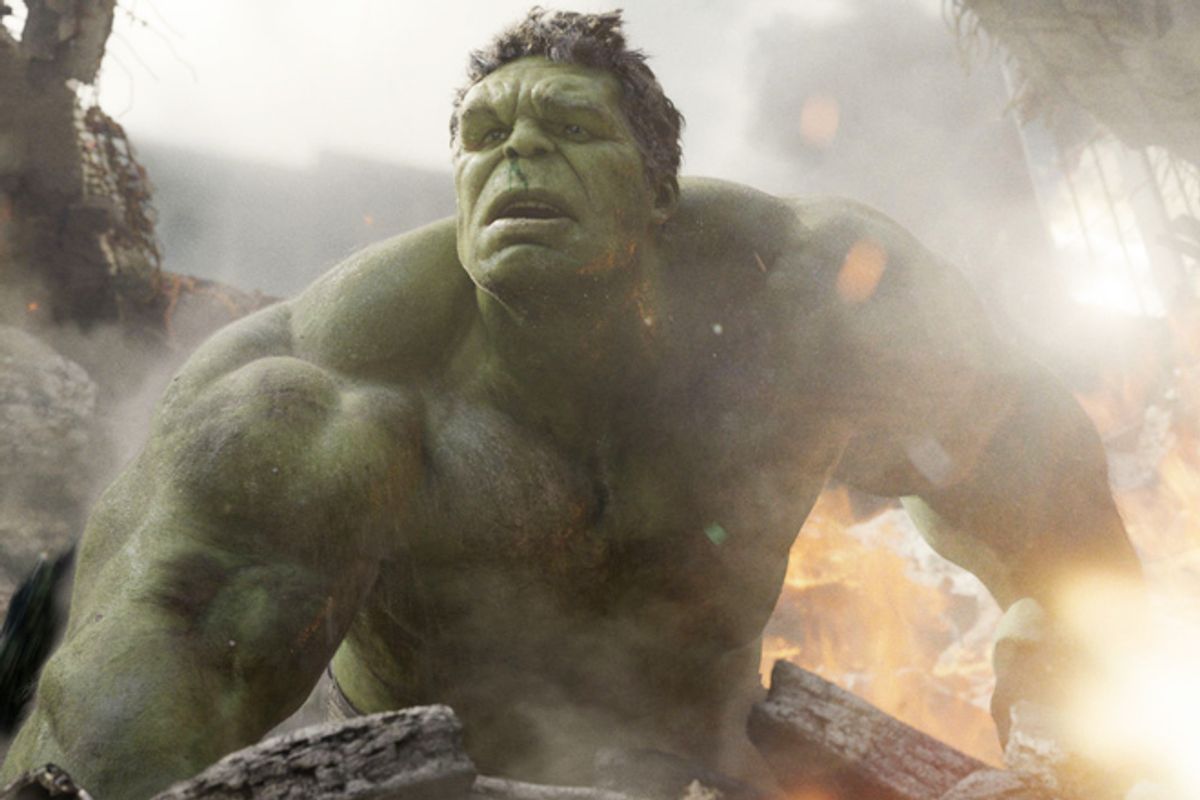 I don't think I'm breaking any news if I tell you that "The Avengers," Joss Whedon's ensemble action-adventure that unites an entire posse of Marvel Comics superheroes, will be far and away this weekend's No. 1 film at the box office. (In fact, "Avengers" is already the eighth-highest grossing film of 2012, with more than $260 million in global revenue before its North American release.) Or that a large majority of those ticket buyers will be teenage boys and young men. Like most summer "tent-pole" productions -- those designed to support franchises, and ensure the financial future of major studios -- "The Avengers" is aimed squarely at guys under 35, long the demographic, psychological and economic bulwark of the movie industry. In the weeks ahead, we'll see a whole bunch more male-centric, big-budget releases: "Battleship," "The Dictator," "Men in Black III," "Prometheus," "The Amazing Spider-Man" and "The Dark Knight Rises," potentially the biggest of all.

All this is standard operating procedure in 21st-century Hollywood, where the industry is dominated by post-boomer males reared on the comic books, TV shows and blockbuster movies of the '60s, '70s and '80s, and the audience is understood in almost Pavlovian terms as a slavering horde of permanent adolescents. Audience familiarity and "pre-awareness" are greatly prized, so nearly all these guy-oriented movies derive from superhero comics or video games or other decades-old pop franchises. (It is, of course, possible to go too far into the pop-culture past. Let's observe a moment of silence, once again, for "John Carter.") We can certainly argue about which of these movies create an interesting twist on existing formula and which are cynical crap, but I don't think we can argue that it makes much difference to the bottom line. "The Avengers" will make a kazillion dollars, and so did "Transformers: Dark of the Moon." The differences between the two are mostly a matter of fine-grained detail; they've both got cartoonish male bonding, a lot of stuff blowing up, and hot-chick eye candy.

If you're female and you're interested in any or all of the above pictures, by the way, I apologize for making it sound as if you don't exist. But in marketing terms, you don't. There's no end of paradox in Hollywood's patronizing attitude toward female viewers, especially given the long-held marketing truism that in a date-night situation, the woman's vote typically holds more sway than the man's. (It's a standard sitcom joke, right? She persuades him to go see "The Notebook," and he has to pretend he didn't cry at the end.) But broadly speaking, women are supposed to be satisfied with the mid-budget, low-prestige romantic comedies made on the Hollywood margins, many of which are so phoned-in and formulaic -- hello, Garry Marshall! -- they make Michael Bay look like Fassbinder. (Actually, Michael Bay is kind of like Fassbinder. But let's not get distracted.)

Of course, the Hollywood suits have no objection to making enormous piles of money off female moviegoers, whom they rediscover every few years. (See also: "Ghost," "Pretty Woman" and the careers of Meg Ryan and Hugh Grant.) But even enormously profitable franchises like "Sex and the City" and "The Twilight Saga" exist in a sort of pink-hued ghetto, and are widely understood both inside and outside the industry as being silly and second-rate. As opposed to the movies about muscular guys in colored costumes who fight evildoers from outer space, which attract the biggest budgets, the biggest stars and the highest possible production values. When feminist critics argued, for example, that "Sex and the City 2" received far more scathing treatment from male reviewers than did guy-oriented movies that were every bit as wretched, I at first resisted. I now think they were correct: Critics make allowances for dumb, macho action movies, because they conform to unconscious norms and expectations, in a way they don't for silly, superficial "vagina movies." I have long contended that if you construct a Venn diagram showing the best of the (universally derided) "Twilight" movies and the worst of the (universally praised) "Harry Potter" movies, there's way more overlap than fans of the latter would easily admit.

All of this reflects deeply ingrained social and cultural ideas about gender, which are present in people of both sexes. Maybe men's preference for violent action yarns and women's preference for sappy love stories -- and our tendency to understand one as more "serious" than the other -- are hard-wired in some biological way, although that falls a long way short of scientific truth. But despite the torrent of male-centric franchise flicks we'll see this summer, and next summer, and for all the summers into the foreseeable future, the tide in the Hollywood gender wars has begun to shift, slightly but perceptibly. As I said earlier, "The Avengers" will be No. 1 this coming weekend. But the top-grossing film for the preceding six weeks was a female-oriented picture: Four weeks of "The Hunger Games," followed by two weeks at the top for surprise hit "Think Like a Man," whose principal audience was not just women but African-American women, who make up about 6 percent of the United States population. (Clearly a lot of other people went to see it too.)

Those six weeks aren't statistically meaningful by themselves. But when added to the big numbers rolled up last year by "The Help" and "Bridesmaids," and the $1.7 billion taken in so far by "The Twilight Saga" around the world, they begin to suggest the contours of a new reality, one in which films aimed at girls and women are high-end blockbusters on an equal footing with guy-flicks. This year, "Hunger Games" will be somewhere near the top in global box-office returns, alongside "The Avengers" and Chris Nolan's final Dark Knight film. While I don't think "Hunger Games" is likely to be remembered as a cinematic breakthrough, it's an important movie in other ways. Its canny blend of science fiction, action flick and love story nosed it out of the pink ghetto in various ways; it was presented by industry insiders as a high-stakes gamble and a worthy successor to the Harry Potter franchise, and male critics were mostly respectful, not reacting as if they were being flooded with icky estrogen. If the film's audience was predominantly female, the film's ethos -- the cultural narrative surrounding it -- was more butch.

Maybe it's coincidental that two of the biggest female-oriented films we'll see this summer -- Pixar's animated "Brave" and "Snow White and the Huntsman," with Kristen Stewart and Chris Hemsworth -- are genre-mixing action pictures with independent-minded heroines. But when it comes to the sluggish, reactionary and massively over-thought process of making Hollywood movies, I don't believe in coincidence. Some of you with long cultural memories may be wondering whether this could mark the beginning of a long-arc trend that brings us back to big-budget Hollywood movies that aren't so niche-marketed and gender-specific, that are meant to appeal to all ages and both sexes. One answer to that question is "Hey, Tim Burton and James Cameron and Peter Jackson," and another answer is "only sort of." In the meantime, it's business as usual: "Battleship," which is based on "the classic Hasbro naval combat game," will open directly opposite "What to Expect When You're Expecting," which is based on a series of lecturey and divisive pregnancy advice books. I honestly can't decide which one to see first.