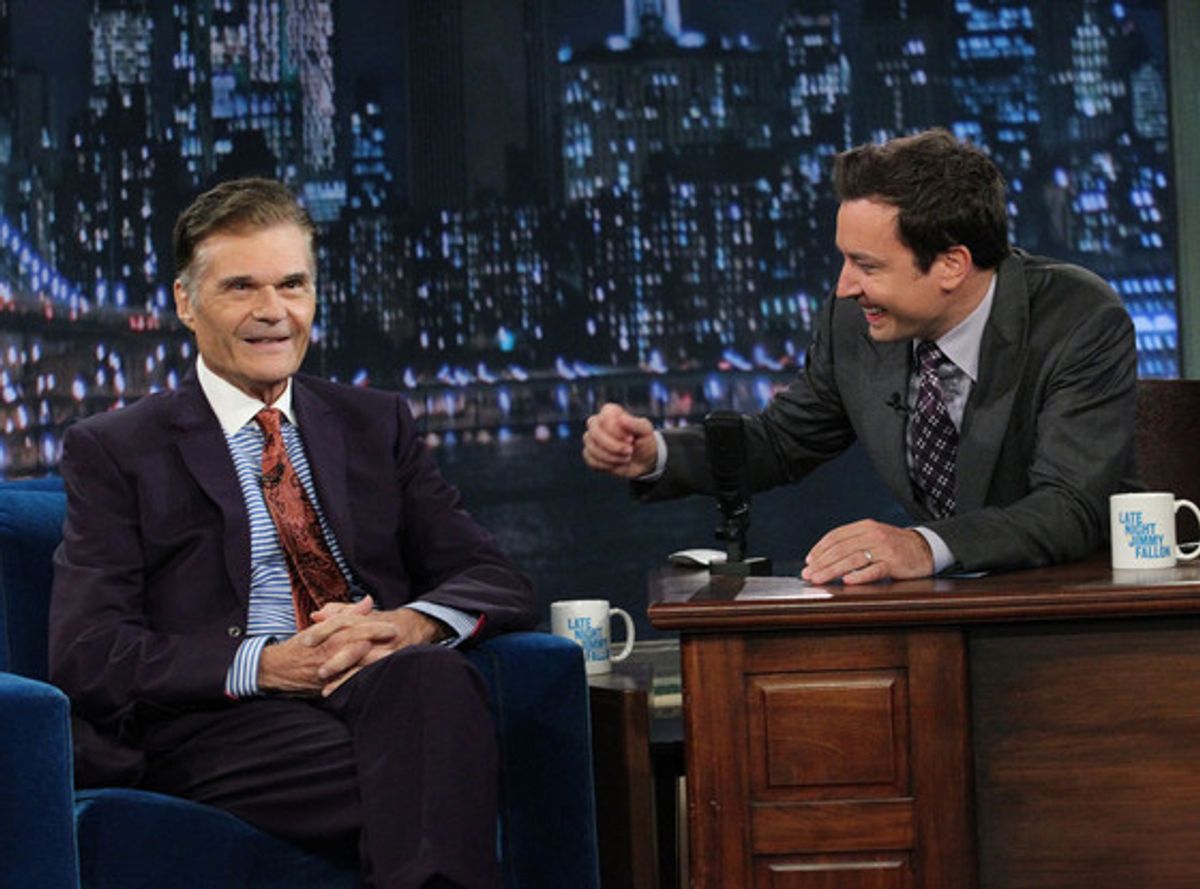 The glib yet contrite yet funny yet sincere late-night walk of shame after a public scandal is as familiar a pop culture trope as athletes thanking God for their success and dating competitions throwing in the most! shocking! twist! ever! Yet on Jimmy Fallon's show Thursday night, the unfailingly fantastic Fred Willard managed to set the bar just a little higher for every celebrity who will follow in his footsteps after allegedly getting caught doing something embarrassing with his penis.

The 72-year-old Willard, whose lengthy career has raised goofiness to its highest art form, was until quite recently best known for his roles in Christopher Guest's mockumentaries "Best in Show" and "A Mighty Wind," as Phil Dunphy's dad on "Modern Family," and for his scene-stealing cameos in every third comedy movie that gets released. Earlier his month, however, Willard earned a new claim to fame after being arrested for engaging in a lewd act at an adult movie theater in Hollywood. The news made national headlines for revealing the surprising habits of a beloved star, and for exposing the fact that adult theaters apparently still exist.

After the incident, Willard was swiftly dumped from his gig as narrator of "Market Warriors" by PBS and, as expected, had to go into hasty damage control. He sent out a quick tweet that "Wait till u hear my version; much more PG. & my review, lousy film, but theater would make a terrific racquetball court. Full story 2 follow." On Fallon's show, he still didn't give a very detailed version of what went down at the Tiki Theater, but he did reveal himself to be as charming and appealing as ever.

After walking out to the theme from "Diff’rent Strokes," Willard sat down and, in a line right up there with Pee Wee Herman's "Heard any good jokes lately?" dryly asked, "Jimmy, what do you want to talk about first?" He then segued into a smooth comic back and forth with the host, declaring, "That's the last time I listen to my wife when she says, 'Why don’t you go out and see a movie?'" That prompted Fallon to ask, "Was it 'The Firm'? Was it 'Free Willy'? Was it 'Anaconda'?" Willard's retort? "Sadly, it was 'Get Shorty.'"

Aside from the fact that somebody's writers don't seem to have gotten out much since the '90s, the exchange was a cute, clever defusing of a potential P.R. disaster. Sure, Willard's been riding on a wave of public support, but the incident has already cost him a job. He needed an out-of-the-ballpark moment to keep the good will going, and he got one. And when Willard admitted, "It's embarrassing as hell ... Nothing happened. I did nothing wrong. Everything's being sorted out as we speak ... It's very painful, but I try to laugh it off," it was a humanizing capper to what could have been a too-jokey exchange.

Like David Letterman, who candidly admitted his dalliances with co-workers after a CBS employee tried to blackmail him, Willard knows how to skillfully tread the line of acknowledging his scandals and making light of them. He is, after all, an entertainer, one who understands the need to flit upon the topic of his embarrassment and pain, then land somewhere altogether different. Whatever his personal recreational habits may be, when he's on-screen, he's a goddamn treasure, a one of a kind wit. He reminded us all of that again on "Late Night" Thursday. And when Fallon told him, "You're a good man, you've always been, you're one of my favorites ever," he was speaking for so many of Willard's lifelong fans. Especially when he added, "You can come to our show and do whatever the heck you want to – except for certain things."