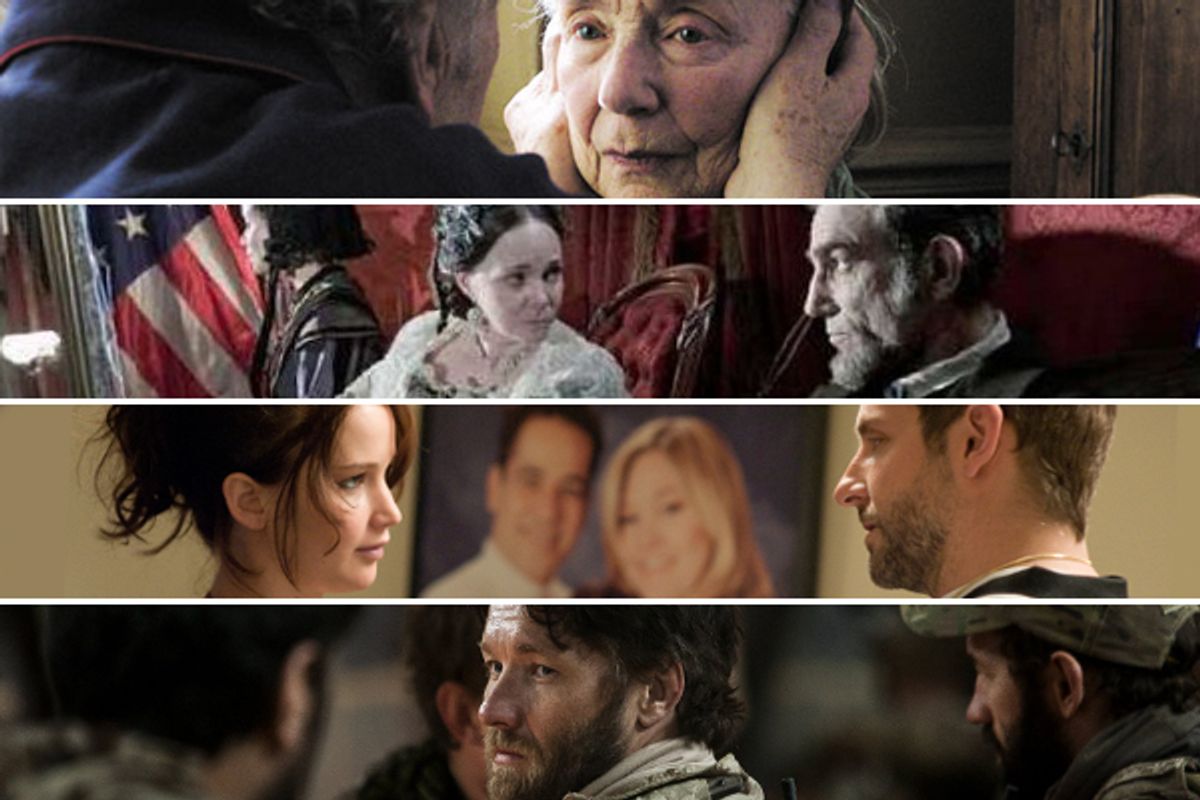 Hollywood could be getting an unexpected gift this season: An Oscar race that isn’t completely boring. With an impressive number of high-quality and high-visibility movies in the mix, movies that offer markedly different worldviews, interpretations of human experience and dramatized real-world events, the Academy Award struggle of 2013 ought to be a heated cultural imbroglio with all sorts of ideological overtones, one that lays bare some of the fault lines in American society.

Kathryn Bigelow’s Osama-hunting thriller “Zero Dark Thirty” has already been proclaimed the year’s best film by several critics’ groups (including the New York Film Critics Circle, to which I belong), and become the object of a left-wing counterattack, all before its official release. Steven Spielberg’s “Lincoln” depicts our most revered president as a shrewd political manipulator, and has itself been mired in historical controversy about its presentation of the struggle to end slavery. Quentin Tarantino’s “Django Unchained” takes on our nation’s “peculiar institution” from a different angle, spinning an outrageous tale of a freed slave taking garish and bloody revenge on the antebellum slave-owning class, with the director’s usual indifference to accuracy, plausibility or taste. Michael Haneke’s “Amour,” a front-runner in the foreign-language race and a likely contender in other categories, tackles a subject that may be even more taboo than torture and slavery: The realities of old age and death that we will all face.

Even the less overtly “political” titles in the upcoming Oscar race feel more contemporary and connected to larger cultural questions than is often the case. David O. Russell’s audience-friendly “Silver Linings Playbook” may be viewed by many Oscar voters as a conflict-free safe haven, but that movie can also be understood as an attempt to reinvent the tired romantic comedy genre and invigorate it with real-world issues and dramatic heft. Tom Hooper’s star-studded screen version of “Les Misérables” gives the movie musical a similar makeover, with its actors singing live (rather than lip-syncing to prerecorded tracks) and Victor Hugo’s epic melodrama rendered as full-bore, big-screen CGI spectacle. As for the first installment of Peter Jackson’s “The Hobbit” – well, no, I can’t argue that offers anything new and different beyond its creepy-looking 48fps video projection. Which is why Jackson and his fans will likely be watching the Oscar race from the outside.

In perhaps the most remarkable Oscar-season twist of all, those are (mostly) good to excellent movies, well worth seeing and talking about. (I’ve now seen almost every plausible Oscar contender, with the conceivable exception of Juan Antonio Bayona’s tsunami drama “The Impossible,” starring Naomi Watts and Ewan McGregor.) Of the ones I’ve listed, only “Les Miz” has the high-prestige, middlebrow thrum of classic Oscar bait. But while that definitely isn’t my personal favorite among the contenders, Hooper handles the combination of cheese, schmaltz and old-school moral conflict with tremendous gusto. I won’t feel horrified or outraged – or at least I don’t think I will, right now -- if it wins the big prize. As you may have noticed over the years, the Oscars is more of a popularity contest or an industry trade show than a gauge of lasting artistic merit.

Arguably it’s always most fruitful to regard the Oscars in symbolic terms, as a struggle over the barely-left-of-center heart of mainstream culture. As an actual election – one whose voting population disproportionately consists of old white people living in Los Angeles County – they can be pretty darn disappointing. Generally speaking, the results can be seen to expose the shifting and complicated ideological rifts within the American movie industry. It’s just that most of the time those rifts aren’t very interesting. Sure, last winter’s exceptionally tepid Oscar campaign offered competing visions of film aesthetics and film culture, as presented in “The Artist,” “The Descendants,” “The Help” and “Hugo.” But did anybody, excepting those deluded cultists who held out hope for “The Tree of Life,” really care? Of those choices, only “The Help” – a movie that became fatally contaminated by racial controversy – seemed to offer any commentary or reflection on larger cultural and political questions.

In 2010, we had a juicier showdown between “The King’s Speech” and “The Social Network,” one that pitted movie critics against industry insiders, and revealed an all too predictable generational divide. But did defenders of either film – or partisans of “Black Swan,” “Inception” and “Toy Story 3” – ever argue that they had something to say, some X factor that stayed with you after the movie was over and moved them into the larger cultural debate? Leaving aside the half-serious argument that “Toy Story 3” was a Holocaust film, I don’t think so.

You have to go back to Kathryn Bigelow’s last appearance in the Oscar race, the 2009 collision between “Avatar” and “The Hurt Locker,” to find any significant degree of real-world resonance. Both pictures seemed to capture leading American filmmakers struggling with our precarious position of global dominance. One was a gorgeous but ludicrous eco-fable set on another planet that was one of the most successful pictures ever made, and the other was a morally ambiguous war story that became the least lucrative Oscar winner in history. And that’s without getting into the fact that the two directors used to be married to each other!

Before that it’s back to 2005, when Paul Haggis’ “Crash” won a surprise victory over “Brokeback Mountain,” “Good Night, and Good Luck” and “Munich” in an Oscar season that will and should live in infamy. But since at least 1990, and probably earlier than that, the Academy Awards have felt increasingly disconnected from larger cultural and political debates, even when the contest was hot and the movies were good. I mean, “Forrest Gump” vs. “Pulp Fiction” vs. “The Shawshank Redemption” – with by far the worst of those three winning – tells us a good deal about the backward-looking state of Hollywood in 1994, but not much else. (See also: “Shakespeare in Love” vs. “Saving Private Ryan,” 1998; “Dances With Wolves” vs. “Goodfellas,” 1990.)

This year’s race, with all the promised riches it offers to Op-Ed columnists and television pundits, could merit comparison with the epochal Oscar seasons of long ago, when the movies themselves seemed like much bigger events and came freighted with all kinds of cultural and political baggage about who was watching them and what messages they carried away. No period in Oscar history was richer in that respect than the stretch from about 1971 to 1976, with the first of those years offering a contest between “The French Connection,” “A Clockwork Orange” and “The Last Picture Show,” and the last including “Rocky” winning the Oscar over “All the President’s Men,” “Bound for Glory,” “Network” and “Taxi Driver.”

It’s not coincidental, of course, that those were also years of immense turmoil in American society and explosive creativity in the American film industry, and the two phenomena were inextricably connected. We’re not dealing with that level of change and ferment at the moment; all the filmmakers implicated in this year’s race are old pros, and at the level of cinematic art and craft, their movies are fairly conventional. But I do believe that all the social conflict and division that has paralyzed American politics in the last four-plus years, coupled with an economic recession that has forced many of us to reconsider long-held assumptions and downsize our lifestyles, has driven mainstream film in a more serious and contemplative direction. (Quentin Tarantino is laughing like a hyena right now -- startlingly like a hyena, in fact -- but it’s nonetheless true that the geysers of blood shed in “Django Unchained” are meant to have an ideological purpose.)

What will actually happen this year? Well, let’s put off the horse-race analysis for a while, shall we, and focus on the fact that it ought to be both meaty and fun. We’ve got plenty of time to spar over whether Dick Cheney will love “Zero Dark Thirty” (my verdict: He might, but he shouldn’t) and whether “Lincoln” offers more than a hokey Great Man view of history or a lesson in political compromise (yes, much more). Is “Amour,” with its wrenching tale of an older couple facing the end, simply too much for the geriatric Academy electorate? Is “Django Unchained” a work of disruptive brilliance or an undisciplined crap-fest? How bad is Russell Crowe’s singing voice in “Les Miz,” exactly? (Honestly, not all that bad.) Will whatever movie you hate the most from this list probably win? Well, you know the answer to that one.